This ski season is now upon us! I’m gearing up for my 21st ski trip, and cannot wait to get back on the powder.

This year I’ll be heading back to Austria, a country I’ve not skied in since 2015.

Austria has a lot of plus points: generally cheaper than France, arguably better apres (more on that below) and some fantastic snow sure resorts.

As the global temperature warms up, heavy snow isn’t always guaranteed until mid-January, so if you’re planning on going skiing earlier in the season, or in late March and April when the temperatures are warmer, where should you go in Austria?

This year I’m going back to Mayrhofen, and cannot wait. I’ve skied here three times, and it’s a brilliant resort and ski area. Mayrhofen itself sits at 630m, but one speedy, newly renovated gondola will whisk you up to 1,800m and the highest run starts at ,2500m at the top of Horbergjoch chairlift. Mayrhofen has loads of accommodation options, a fantastic apres scene (see this post) and 142km of groomed pistes. 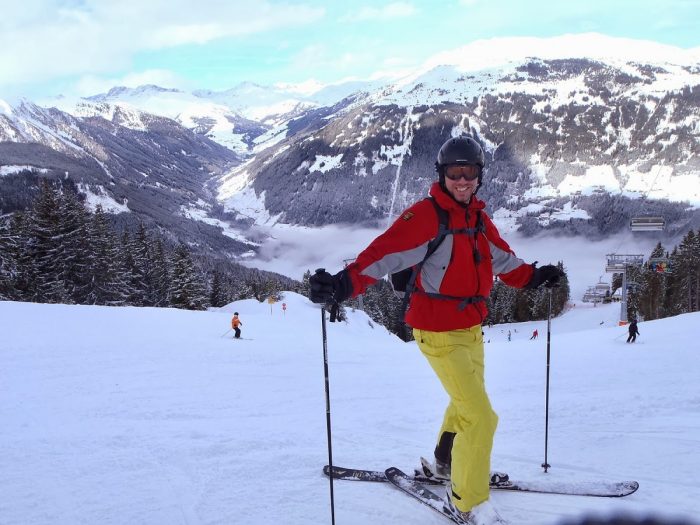 Recognise the name? That may be because the James Bond film Spectre raised Solden’s international profile, with several scenes being filmed there. Film associations aside, Solden sits at 1,377m, and the top lift stops at 3,250m, so ‘snow sure’ should be its middle name. It has two glaciers to boot, which provide high-altitude, intermediate-friendly skiing most of the year round. In fact a ski tunnel connects both glacier ski mountains, and in October / November you can enjoy surprisingly uncrowded slopes. 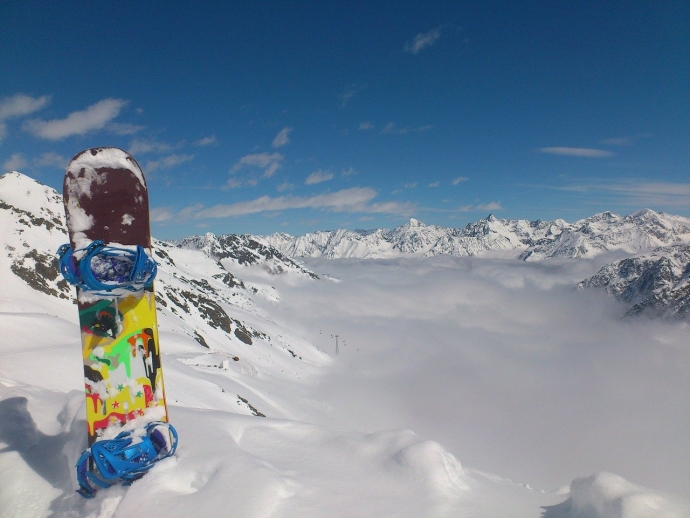 My Auntie and Uncle have skied in Kaprun a number of times and rave about it. Together with neighbouring Zell am See, the two resorts are only a 60-minute journey from Salzburg airport. Kaprun wins for snow sure skiing thanks to the glacier on the Kitzsteinhorn, with ski lifts serving a ski area between 1978m and 3030m. It is so snow sure that the slopes are open from early October to the middle of July. 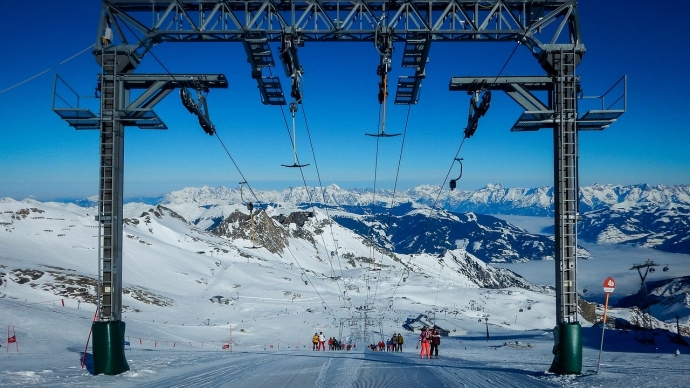 Snow sure skiing on the Kitzsteinhorn in Kaprun

Whilst Obergurgl is in the same valley as Solden, it doesn’t have a glacier…but still collects huge amounts of snow over a season. It is the highest ski resort in Austria at 1,950m, and the top lift spins you out at 3,080m, and from there you’ve got 112km of piste ti play with. The snowfall begins in October and often lasts until late April, making it a great shout for a ski holiday. 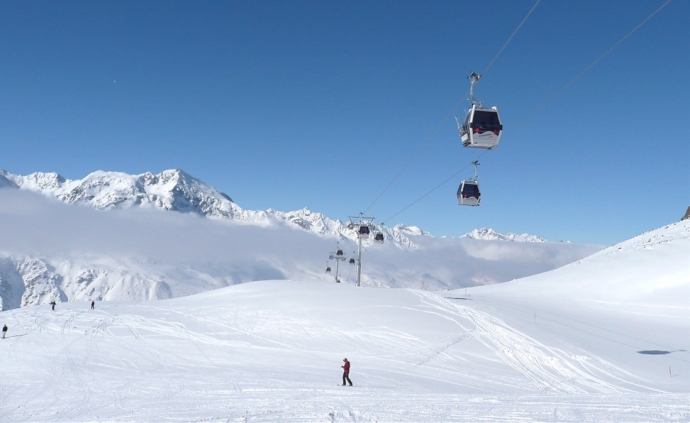 Skiing under the Schermerbahn lift, Obergurgl

Out of all the ski resorts in this list, I’ve always wanted to go to Ischgl over all the others. There just seems to be something special about it. It might be the great apres scene, or the reviews I’ve heard from other fellow skiers. Either way, the majority of the skiing in Ischgl takes place above 2000m, and peaks at 2812m. Get up early before those with sore heads on a bluebird powder day and you’ll be heaven. 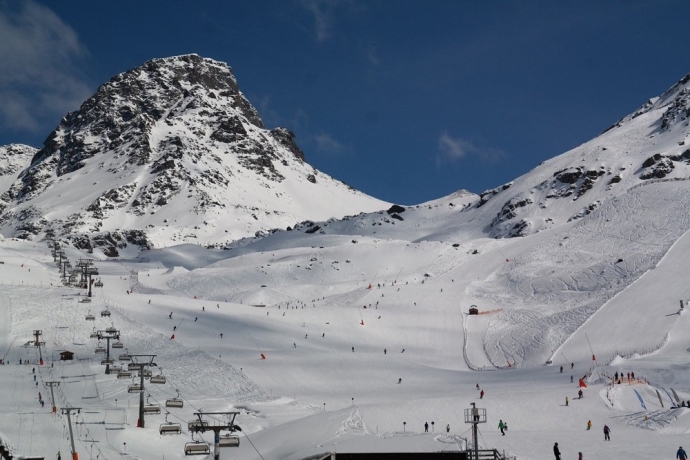 If the snow cover is light elsewhere in Austria, be assured, Obertauern will have plenty of the white stuff. Unusually for Austria, this is a purpose built resort, and it’s high altitude ski area has pretty much guaranteed good ski conditions all season long. On average 3.5 metres of snow will cover in the resort during a season, and even if that’s not the case, the majority of the ski area is covered by snow canons, so you can’t go wrong! 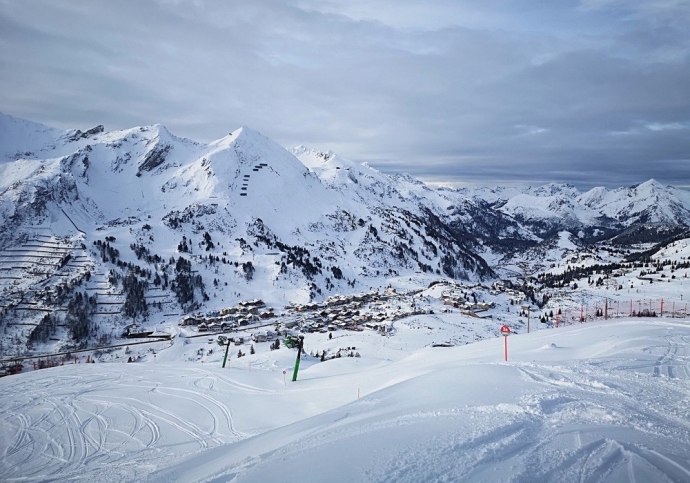 Looking down towards Obertauern, from red piste 3A

If you want to stay in a picturesque Tirolean resort, this is it. A steep, wooded valley, topped by craggy peaks and a stones throw from Austria’s largest glacier. The Stubai Glacier is reached by ski-bus from Neustift, followed by gondolas, and is open almost year-round for skiing, with over 110km of piste, with a top height of 3,333m. It is brilliantly accessible too: the commute from Innsbruck airport takes less than 30 minutes. 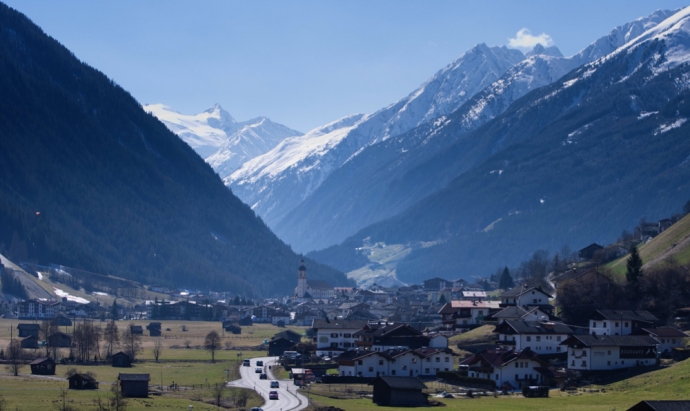 Lech and neighbouring Zurs are about as snowy as they come. In fact Lech has scooped the award for most snowy resort in Europe many times. Starting at 1,450m, the top lift drops you out at 2,450m, and then you have the whole of the Arlberg ski area to enjoy. The snow can properly pile up here too…having been known to clear 4m easily in a season. The new Flexenbahn link now connects Lech with St Anton making the Arlberg ski area one of the most exciting in the Alps. 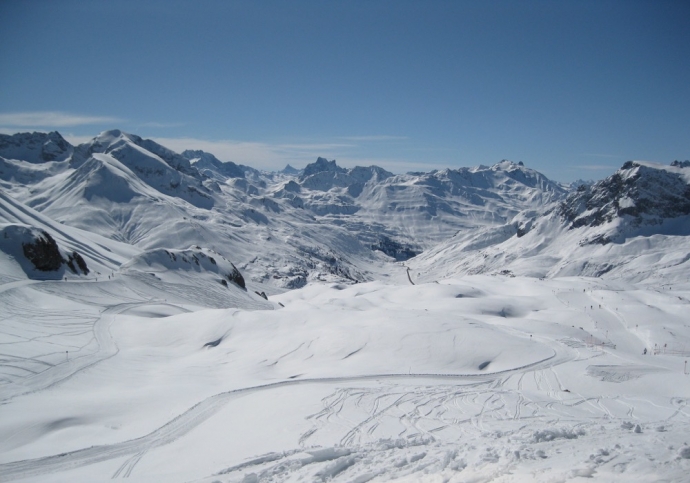 Snow galore in Lech, and the Arlberg Ski Area

Voila! Eight of the best snow sure ski resorts in Austria. Great apres, Austrian charm, and high altitude ski areas means you are pretty much guaranteed snow, regardless of which part of the ski season you choose to go.

The Best Luxury Ski Chalets In Europe
Scroll to top