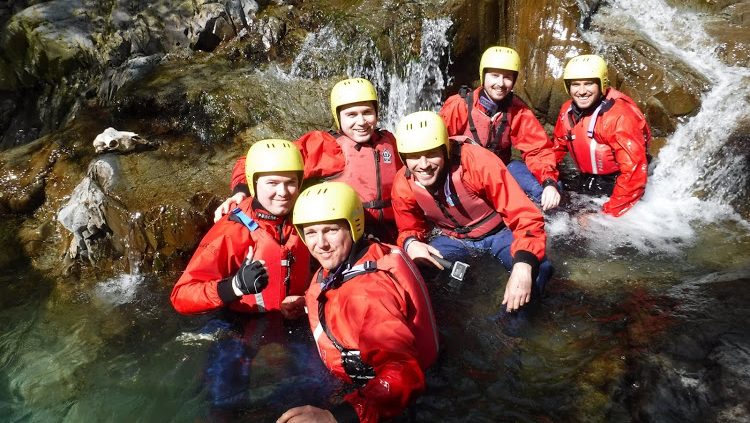 I think of myself as pretty adventurous. Someone who will try anything once. Before June, I’d never been canyoning (also called canyoneering or gorge scrambling).

I’ve done a skydive. I’ve been white water rafting. I did rock jumping less than 3 weeks ago in Malawi. Even though it wasn’t on my bucket list, I’ve also done a bungee jump. Now it was time to add another adrenaline activity to that list.

In May this year, a message came through from my friends back home that they were thinking of doing canyoneering in Coniston, in the Lake District, my favourite UK national park. “Keen“, came my simple, confirmative reply, which is where this story begins.

We made the hour and a half journey up from my home town on Preston on a sunny Saturday morning.

We parked on a small industrial estate surrounded by lush green fields, and made our way into the Joint Adventures building, our canyoneering guides in Coniston.

CANYONEERING HAS NO AGE LIMIT

“It might be blue sky and sunshine, but believe me the water is still pretty cold”, said our guide, who must have been well in his 60’s.

If he can do gorge scrambling and canyoning, then I definitely can, I said to myself as he started talking about the beginning of our canyoning journey.

In truth, there wasn’t much of a safety briefing. Just follow his lead, let him go first, and all will be fine. That was good enough for me (my skydive instructor only told me what to do less than 10 minutes before we jumped out of a plane at 15,000 ft, this was nothing).
We asked him how old the youngest and oldest canyoneers had been. “Oh we’ve had people in their 80’s and kids as young as 12 do the canyoning“, he said.

It was a gloriously sunny day in Coniston, so it felt strange to be pulling on a thick wetsuit indoors. This wetsuit was followed by a waterproof jacket, protective trousers (to prevent the wetsuits from getting snagged on rocks), a life vest, a harness and finally a helmet.

To say it was warm when we stepped out into the sunshine was an understatement. We were hoping the walk to the river wouldn’t be far.

One by one, our wetsuit-clad warm bodies set off towards the town centre, veering uphill, venturing past The Sun pub and onto the start of the path that leads up to the Old Man Of Coniston. 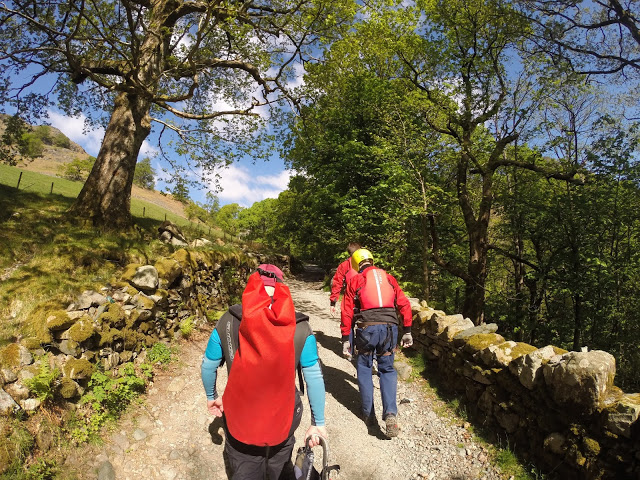 Then the rugged path became steep.

With the sun beaming down onto our dark trousers and red life vests we were warming up quick – despite the warning of cool waters at the beginning, we now couldn’t wait to get in and cool off!

We converged with Church Beck, which was now running parallel with us. We saw a steep waterfall flowing from one rocky level, dropping around 40 feet below. We dismissed it as a lovely sight and nothing more. That was a mistake.

“Right then guys, here we are“, said our guide as we reached a bridge just the other side of the waterfall. Uh oh.

INTO THE COLD, LAKE DISTRICT WATER

After tightening our harnesses, helmets and life jackets as much as comfortably possible, we made our way down to Church Beck, next to a sturdy tree.

We jumped into the beck for a cool off, and then it was time for action.

We were told we were going to abseil backwards down the waterfall. Lean right back, and walk down. Sounds simple, right? Well it would have been, if the rocks beneath weren’t slippery, and the power of the waterfall wasn’t pushing down against your legs and waist.

I was fourth in line.

With the GoPro firmly attached, I hooked my carabiner onto the rope and trusted the sturdy tree to hold my weight. Little by little, step by step, I picked my route and made my way down the waterfall. 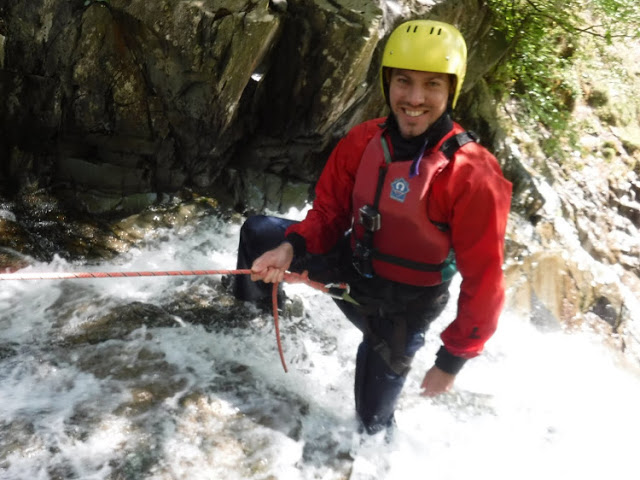 The the inevitable happened.

My right foot hit a rock of slime and I slammed face first into the waterfall. A combination of my feet, thick life jacket and helmet kept me safe, but I did get several mouthfuls of water as I laughed out loud at myself getting pounded by the relentless cold river water from above.

I finally made my way down and set up the GoPro, being more than confident one of the other lads would slip and do the same. Sure enough, two others slipped. 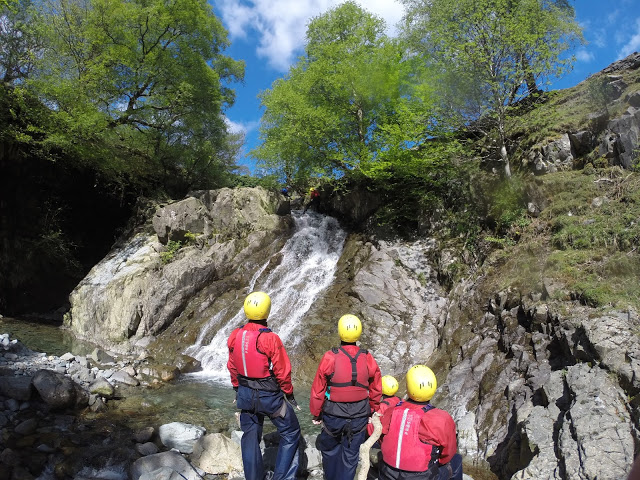 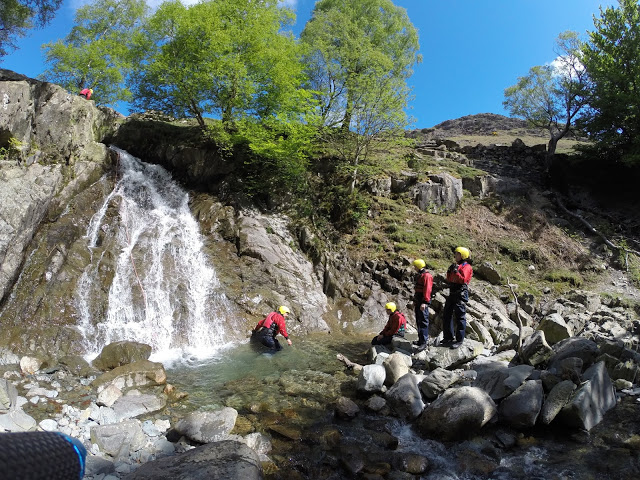 My adrenaline was now at level 2, as we patted each other on the back for a job mostly well done.

Onto the next challenge.

We waded through the shallow river and began to hear the familiar sound of rushing water getting gradually louder. We eventually reached our first rock jump.

This is where canyoning in Coniston really began.

“So this first one is a little tricky“, began our guide. “The water is a little shallow, so you have to jump exactly where I tell you. To far left or right and you’ll hit your arms. To close to your jumping point and you’ll hurt your legs“.

“Don’t worry, you’ll be fine“, came the reassurance we were secretly all waiting for. “Just keep your arms crossed over your chest, or stretched out above your head“, our guide continued. “Follow me and you’ll have no problems“.

And with that, he tossed his waterproof bag over the waterfall, stood up on the rock, and jumped.

This man is close to 60 years of age, and must have done this countless times, I thought. He waved us down as he swam away from the landing zone. Not one to shy away from an adrenaline challenge, I stepped forward, took a breath, and jumped. 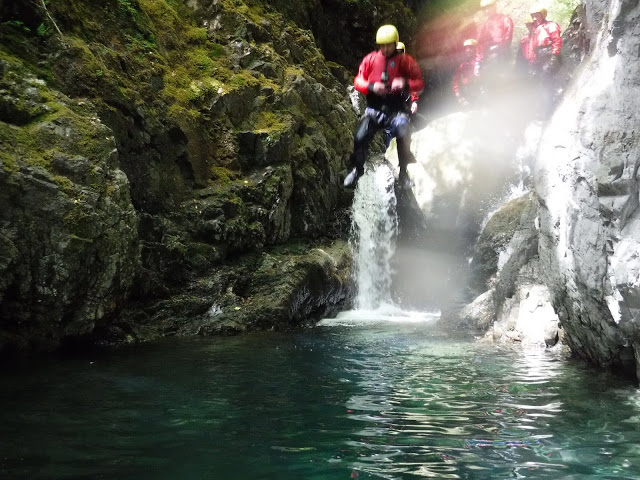 I landed in the perfect spot between the rocks, with only a slight brush on my wetsuit covered elbow. Now that was fun!

One by one, our group followed, their nerves quickly removed by the male-dominated baiting of those who went before them. We all made it. No injuries, and a lot of adrenaline.

We waded onto our next challenge – more of a rock slide rather than a jump, as we made our way back down the river towards Coniston. This canyoning challenge was a little easier than the first, although the landing had to be spot on again.

One by one we followed our guides instructions, positioned ourselves on the starting rock, and slid into the water 15 feet below. Confidence was now flowing through our bodies as we began to relax, thinking what we’d already achieved in such a short time, and knowing we’d be able to tackle anything that now came our way.

“This next one is a little tricky“, began our guide. We looked at each other with mild concern. “You have to jump and twist yourself at the same time, in order to land in the correct position away from all the rocks“.

I wasn’t going first this time around.

Again, our guide set off and showed us what to do. It was a tricky jump, as you had to get distance, position and the twist right. Another member of the group went first. As he left the rock I thought he’d overshot his landing point. He had, and knew it too. Arms slightly outstretched, he twisted perfectly, but just in case he was too close to the rock wall his left leg automatically came out to prevent harm, and then in a split second went in again as his brain realised his landing place was ok.

In real-time, it looked like he was going to karate kick the rock wall.

With a few gasps, a few of said ‘no thanks’, and made our way to a safer point to get down into the river. I would have done it if the water level was higher, but wasn’t going to risk losing any limbs this time around!

THE WALL OF ICE

Our last canyoneering challenge was to navigate across a vertical rock wall – like rock climbing, but sideways. The key was to keep clinging onto the rock, and not fall into the river below. 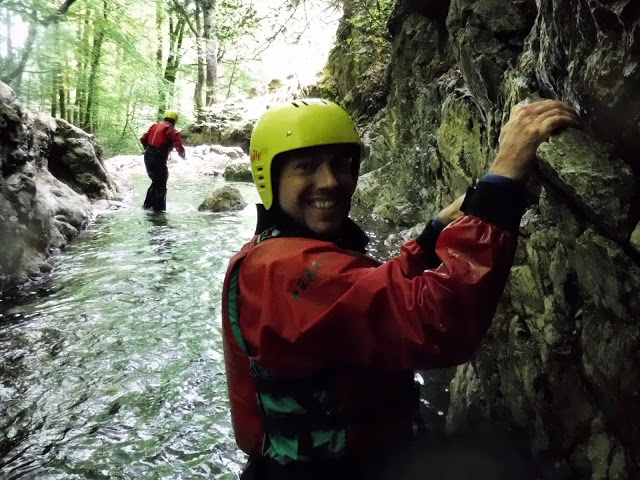 I made it half way, and only one of the group made it. Very tricky indeed! This is in such a shaded, cold spot of the river that our guide said this challenge is impossible in winter, as the rock turns into a wall of ice.

With pats on the back, we waded back up through the river where our guide told us our canyoning adventure was complete. What a fun morning! We hiked our way out of the river, and back onto the path we hiked up 3 hours earlier.

We could now remove our helmets and life jackets for the walk back to base, and allowed the sun to heat up our wetsuits. It was definitely time to toast our canyoneering success over a pint in the sun 🙂

If you want to give canyoneering and gorge scrambling a go, give Joint Adventures a shout. They also provide kayak lessons and other outdoor pursuits! Watch the video below for some pretty epic GoPro footage 🙂