How many phone numbers do you remember off by heart?

Now tell me how many email addresses or Twitter usernames of friends and colleagues you can reel off. Much more, right?

And so the story begins.

Most of you know I work for a digital marketing company. We manage Social Media campaigns on behalf of companies, so we’re inherently social, usually checking emails, Facebook and Twitter every few minutes. Ironically (you’ll find out why later), I was ploughing through a few emails and checking tweets in the office yesterday evening, when a colleague rushed passed my office room, without checking I was in there. A few minutes later, I heard the beginning of the office alarm beeps.

That colleague had set the alarm with me still in the building.

There are two entry doors. The outside door is locked by key. The interior door locks automatically, and is opened by keycard. The alarm box to set and disable the alarm is situated between these two doors.

I never keep my phone in my jean pockets when I’m sat at my desk. Same goes for my keys and my work pass. It’s much more comfortable to sit without these bulky items in my pockets.

Like most alarms, when our office alarm is set, you have a limited time after triggering the motion sensor to enter the code and prevent the alarm screaming for everyone in Scotland to hear. So I rushed from my desk, opening the first door, my mind fully focused on entering the code and stopping the beeps.

Code entered, alarm disabled – success! Now back to the emails. I push the keycard door.

I pull the outside door.

I check my pockets….nothing. “Oh you are f*cking joking“, I said to myself.

At that moment I was both locked in, and locked out of the office.

I’m not one to panic in these types of situations (and before you ask, no these things don’t normally happen to me). I always think of the worst case scenario – which in this case would be no dinner, and sleeping in a little glass porch until 8am. I could think of worse. Still, I’d preferred that not to happen, so I starting thinking about how I could get out of my predicament.

In the little glass box, I was accompanied by two fire extinguishers, a fake potted tree and an umbrella. At this point, smashing glass did cross my mind.

I explained the situation, and thankfully he had a phone.

“What should I do?“, he asked. I racked my brain to think of phone numbers of friends and colleagues. Nothing.

“Errm…yes” came the reply, so I suggested we compose a tweet. I told him the Twitter handles of colleagues I knew who would check Twitter regularly, and who lived in the nearby area. The tweets were sent.

@andrewgirdwood Simon is stuck between the 2 doors at the office, any chance you can head back with your pass and help him out?

@darcie @miss_kdg Simon is locked between the 2 office doors, any chance you can head back with your pass?

Suddenly my private glass box problem was public. People started to pass on the message. The message got retweeted.

Anyone from #bigmouthmedia out there? Help your colleague Simon who's trapped between the two doors at entrance without his pass! Please RT

We waited. We sent another tweet out to more colleagues. We waited some more. Then, around 30 minutes later, we got a reply.

Neither reply was met with my usual good humour.

@AndrewGirdwood If its the wrong Simon are you not coming to help him out….???! Best I let him down gently!!

@fullvisual @we1rd1ne @digitalcmc @mrheyes Yes it is, Simon can't tweet you back.. If he could then I wouldn't be doing it!! Someone's here.

Is this real?! Somehow I had become the boy that cried wolf. Of course it’s real, get me out of the glass box!

Thankfully a few minutes later, my colleague came to the office, passed me his keycard through the letter box, and I was able escape the glass box. I was able to grab my keys and phone and head home.

When I first joined Twitter 3 years ago, I would never have thought it would save me in some way. The whole predicament taught me several lessons. 1) Twitter has a much bigger reach than I thought. It is also ‘always on’. Many people don’t answer their phone or texts from random numbers. With Twitter, there is always an image or a profile of some sort behind every user, so other Twitter users are more likely to reply. 2) Always carry your phone and work pass card around with you. 3) Memorise a couple of mobile phone numbers. 4) Wear sensible clothing when caught in a similar predicament. Your rescuers may not take you seriously.

The story made the Scottish Metro. 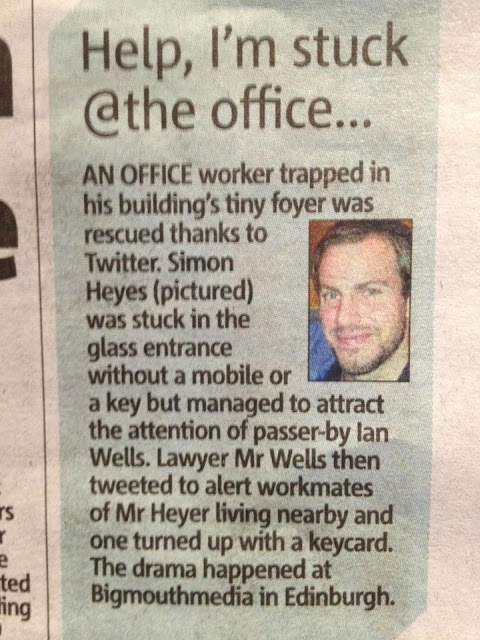