“A man goes to the doctors complaining that he keeps shitting a strawberry every day. ‘Don’t worry’, the doctor says, ‘we’ve got cream for that!’“.

I was on a bus journey between Port Douglas and Cairns in Australia, and the other passengers and myself were around 34 minutes into the bus drivers set of dad jokes. After each one I’d publicly roll my eyes, but privately store each one in my memory bank. I swear learning dad jokes was never on my bucket list.

After an amazing Christmas and New Year in Sydney, I was only meant to stay in Port Douglas for a few days. Unfortunately my friend was sick and couldn’t travel with me, and I also had to wait patiently for the outcome of my Chinese VISA application (and the delivery of my passport). Both of which meant I had to stay a couple of days longer than expected.

My time was limited to travel down the East coast of Australia before I flew out of Brisbane, so extending my stay in Port Douglas had a knock on effect for how long I could stay in Cairns, and as it turned out, I had one night, and two days.

In Cairns, I was staying at Tropic Days hostel, which proudly offered a free meal, 5 nights a week at The Woolshed, a renowned backpackers bar in the centre of Cairns. So myself and a friend grabbed our meal voucher and headed into town.

With the meal washed down with a cold pint of VB, we saw a poster advertising the evenings entertainment. 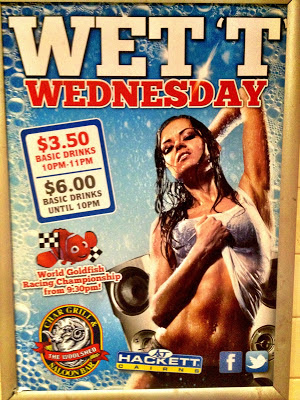 The clown fish caught your eye too, right? 🙂

Well, as I’d enjoyed much hilarity watching cane toad racing back in Port Douglas, I suggested we watch the ‘World Goldfish Racing Championship’ competition, as the commentary could be comical.

But only if we left before the testosterone levels of many early twenty-something males got too high.

What I didn’t anticipate was that each fish was given a nationality, and then people were chosen from the audience – matching the nationality of each goldfish – to ‘race’ the fish along a water-filled tube.

Within seconds I realised I was the closest English person to the race organiser, so the English-goldfish-holding tub was thrust into my hand. My English fish was called Lord Nelson – a fine, upstanding member of the goldfish community (perhaps).

We were read the rules, and told how to race the fish – by blowing bubbles behind them with a straw. The first goldfish to cross the finish line at the other end of the tube wins. 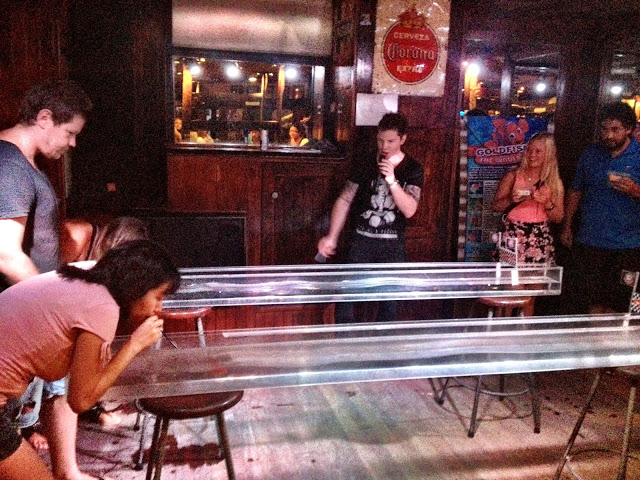 Winning and losing was now the only thing on my mind, and I wasn’t about to lose.

I looked at Lord Nelson and gave him a wink. I could have sworn he saw me.

Round one…we won with ease. Into the semi-finals against a nippy looking Japanese goldfish called Sushi. Again, no problem for Lord Nelson and I. Now the final, against the Canadian fish. We were neck and neck until the final few centimetres, and then Lord Nelson turned on the afterburners.

“England is the winner – give it up for Lord Nelson!“.

Yes!! I raised both hands in the air in celebration, and lapped up the applause.

“You’ve won yourself a free bungy jump with AJ Hackett!!“.

Apparently I’d won a free bungee jump. I went back to look at the poster. So I had.

A skydive has always been on my bucket list. Doing a bungee jump was thrown off the list a few years ago. I decided that if I did I skydive, then there’s no point doing a bungee jump. That was that.

The voucher was only valid for the AJ Hackett site in Cairns. After the extended day in Port Douglas, I had one day left in Cairns.

My mind argued with itself. Give the ticket away? Do the bungee jump? At the end of the day, it was a $170 free prize. This was my one chance to take it. I’m also backpacking, so you take what you can – especially when it’s free.

It seemed fate had dealt me some cards which ended with a 12 hour opportunity to do a bungee jump.

You only live once. 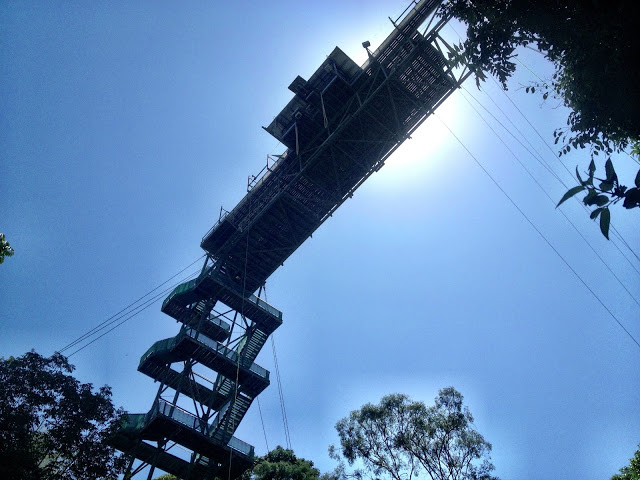 The view up towards the 50m high platform looked considerably higher than 50m. I didn’t feel nervous when I arrived at the site…just…pensive. 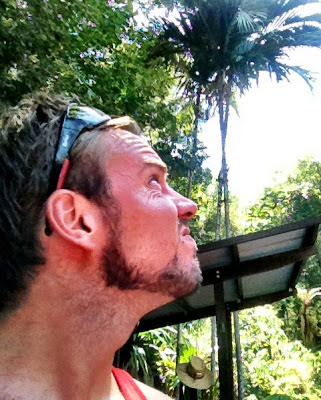 The crew were on a lunch break when I arrived, so I didn’t get to watch any live jumps before I climbed the steps up to the jumping platform. No matter. I started climbing the stairs behind the crew, and a girl who had done a bungee jump before. Still no nerves.

I reached the top and looked over the edge.

I confess the heart rate increased at that point.

I put on the harness.

The girl went first, screaming as she went. I was next.

With my legs tied together, I shuffled out onto the edge of the platform. 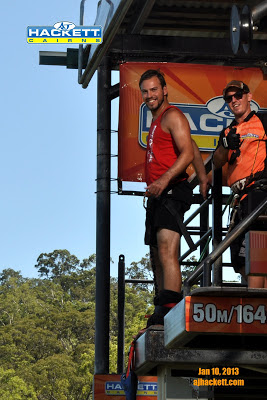 The adrenaline had already kicked in. ‘Only one way down from here’, I told myself. 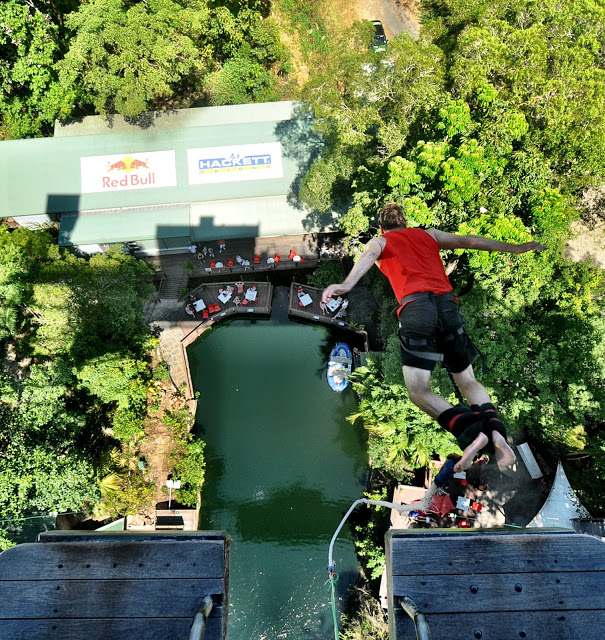 The first second feels the same as jumping off a boat into water…almost like you’re floating. But then the sheer height and speed hits you. Some people scream – my sound was more like a ‘WAAAAAAAHHHHHHHHHHH!’ sound. I wasn’t proud of it.

It was a great experience, and can’t recommend the AJ Hackett team in Cairns enough if you’re travelling round Australia and thinking about doing a bungee jump yourself.

It continues to fascinate me how a chain of decisions can end up with certain experiences.

Every action has a reaction, I guess.

Taking a bungee jump off my bucket list, ended with me doing a bungy jump.

I can’t say the same for dad jokes.