Wherever I travel, I always try to immerse myself in the local culture. Traditions, ways of life, food, drink, dancing…you name it, I’ll try it.

For those of you that have been to Brazil, and walked a long one of Rio de Janeiro’s many fine beaches, you will have seen many sungas. In fact you probably saw so many, you wouldn’t have known where to look.

For those of you unfamiliar with international mens swimwear, sungas are the Brazilian equivalent of speedos….but with slightly more material around the hips.

For all the guys reading this – don’t judge me. This had to be done. Just avert your eyes when necessary.

For all the girls reading this – if you’ve never seen sungas on Brazilian men, and if you’re feeling brave/curious, have a peek at Brazilian sungas on Google Images. 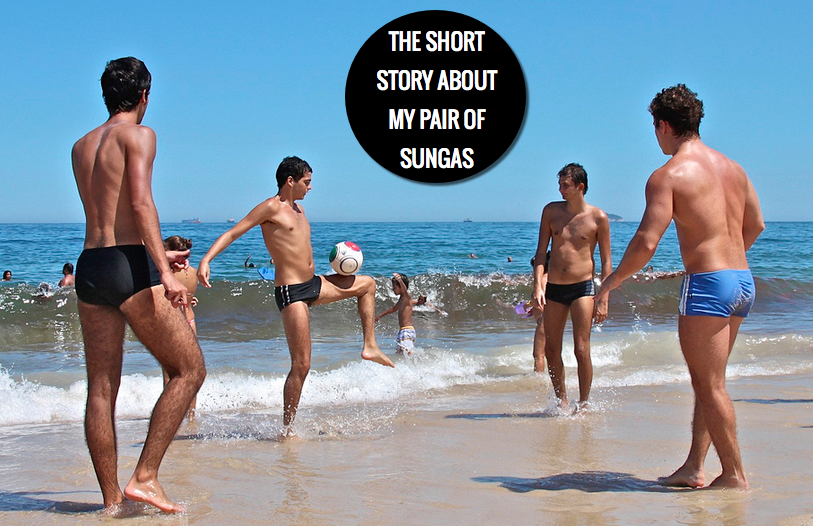 SUNGAS ARE A MUST-HAVE IN BRAZIL

Walking along Ipanema Beach, it soon became clear that Brazilian men do not wear swimming shorts. In fact I would estimate that 99% of men wear sungas.

As such, I felt out of place. I felt I wasn’t immersing myself. I needed to find out what all the hype about sungas was.

A German girl I met in Rio helped shine some light on the infamous sungas. “All the men wear sungas. People travel around the city wearing swimming shorts, so when the get to a pool or the beach, they want to wear something different. They are a must-have item for any beach-based man in Brazil“.

At this point, she looking at my lager arm tan, hairy chest and arms and spat out her beer. She couldn’t control her laughter. “Are you serious?! You want to wear a pair of sungas?”

“I don’t see the problem“, I said. “Besides, it will help get rid of more white bits“. And so we headed into Ipanema, looking for a pair of sungas.

SUNGAS ARE A RIGHT OF PASSAGE

We eventually found a shop that sold sungas.  My German friend spoke fluent Portuguese, which helped our search. “My friend is looking for a pair of sungas“, she must have said, as the look on the ladies face was very similar to my German friend’s face on the beach. This was followed by a rye smile.

I found several pairs. But the next decision was a tough one. Sungas are not simply swimwear. They are a statement of confidence. Plain white ones would be too confident. Plain black would give off a nervous vibe. In fact plain at all wasn’t working. After much sunga deliberation I went for a stripes. Navy blue and dark red.

At the till, the shop assistant was grinning from ear to ear. I felt nervous. I’d bought swimwear before, but never felt like I’d dived into the local culture when doing so previously. Then the woman said something in Portuguese to my friend, passed me the bag, hugged me, and waved goodbye.

“What did she say?!“, I asked my friend, immediately after the shop door closed behind us. “She said ‘no-one forgets their first pair of sungas“, said my friend. And at that moment, I realised sungas were far more than simply a swimwear fashion statement.

Sungas are a right of passage.

Back on the beach I changed into them immediately. No time to waste!

“You look ridiculous“, said my friend. I didn’t care. I now felt pride wearing my sungas. I was now part of the 99% crowd on the beach. Yes, I had bad white bits, and yes, I’m not quite the male adonis that other Brazilian men are, but the sungas felt great, and I now felt part of the culture.

After a few days, I was loving them.  I strutted up and down Ipanema Beach in them. Other travellers I met from around the world found it amusing – no more so than the English – but I was going through my own right of passage. I would leave Brazil with a piece of my own culture.

Back in the UK, Speedos – as we all know – are a faux pas. But sungas aren’t Speedos. Oh no.

Following our 24 peaks in 24 hours challenge, we were booked in for a massage at the Ambleside Salutation Hotel. Donning robes and slippers, we waited for our treatments (back and leg massage). Eventually, I was invited in.

“Ok sir, if you could just jump onto the table under this towel, and roll up your swimming shorts, then I’ll pop back in 2 minutes and we can get started.”

She looked at me like I had four heads.

Like the Brazilian men, I will continue to wear my sungas with pride. Just maybe not in public quite as much 🙂

CLA Game Fair – His And Hers Barbour Jacket Giveaway

Getting To Know Auckland In Five Days
Scroll to top