Hiking The Whisky Trek In the Swiss Alps

You are here: Home1 / Adventures2 / Hiking3 / Hiking The Whisky Trek In the Swiss Alps

Hiking The Whisky Trek In The Swiss Alps

One big whisky-filled alpine adventure in the Alpstein mountains of North East Switzerland.

When you think about Switzerland, you probably think about chocolate, watches and multi-tool army knives.

You certainly wouldn’t think about whisky, am I right?

What country pops into your mind when you think about whisky? Hopefully Scotland, and maybe Japan.

Why are those countries great at making single malt whiskies? They are lands of mountains, crystal clear water and fertile land to farm key ingredients, such as malts and grains.

By it’s very definition, Switzerland has all of those things in abundance. After 20 years of being a cottage industry, whisky is taking off in Switzerland, helped in part by a unique proposition for whisky afficionados wanting to try the best single malts the country produces: a thrilling, unique whisky trek through the Swiss Alps.

As of August 2019, I’ve now completed part of the whisky trek, taking in 9 of the 26 mountain inns, and boy, the alpine scenery is simply incredible. I’ve added some of my photos below, and the vlog about the hike at the bottom of this post.

** UPDATE ** As of March 2020 the coupons book used to collect the little bottles of whisky no longer exist. They can be used until the end of 2020. The whisky trek still exists though, and there is plenty of single malt to try in each of the mountain inns 🙂

The Story Begins With A Law Change In 1999

Until July 1, 1999, the distilling of spirits such as whisky and vodka was prohibited by Swiss law, as the powers that be believed household staple foods such as grains and potatoes should be used for food consumption, and not for the purpose of distilling.

With pressures from the WTO however, Switzerland revoked the law, which in turn opened the door for spirits entrepreneurs to begin creating whisky.

Over in the North East corner of Switzerland, around 1 hour from St. Gallen, lies the town of Appenzell. An alpine region which is situated at the foot of the Alpstein mountains, Appenzell and its brewery has been home to the Locher family since 1886.

When the malt and grain distilling law was lifted in 1999, master brewer Karl Locher, known for his creative range of Appenzell beers, began making their first whisky, Säntis Malt, in beer casks seeped in history using spring water from nearby Alpstein mountains.

The malt is named after the tallest mountain in the Alpstein range – the Säntis – which stands proudly at 8,216 feet (2,504 m) tall, and overlooks the Appenzell region.

After Santis Malt hit the consumer market in 2002, it grew from strengh to strength. It picked up an award for European Whisky of the Year in 2010, and in 2012 it picked up a prize at the International Wine & Spirit Competition (IWSC) in London.

Santis Malt was on the way up, in more ways than one.

Word began to spread about this popular, award-winning local whisky, which perked up the curiosity of Alpstein mountain inn owners, known as ‘Berggasthäuser‘.

Sepp Manser, the landlord of the Berggasthaus Meglisalp, learned that there were occasional special editions of Säntis Malt Whisky being produced. He asked if he could have a one-off whisky for his mountain inn, satisfying the curiosity of an ‘Appenzeller’ and other guests who wanted something special.

Berggasthaus Meglisalp began serving its own, unique version of Santis Malt in the summer of 2012.

What began as one barrel in one Berggasthäus quickly spiralled.

Inspired by great demand and rave reviews from the whisky at the Meglisalp mountain inn, the other Berggasthäus owners put their heads together and came up with the idea of creating a unique whisky for every mountain inn across the Alpstein mountain range.

And so it came about that the 26 Appenzell mountain restaurant began serving their own version of Säntis Malt, and the Alpstein Whisky Trek was born.

But there was one problem.

The whisky would be distilled in Appenzell, and would need to be distributed across the Alpstein. Heavy, wooden barrels, filled with delicious Swiss malt whisky. How could they be transported to all the mountain inns? By hand. By horse. By any means neccessary, that’s how.

Why Each Whisky Is Different

Even though each of the 26 whiskies on the trek are made from the same base malt whisky, every single one is different, both in taste and colour. So much so that the spectrum ranges from light straw coloured whiskies to dark gold.

Four elements affect the flavour and colour of each whisky:

The 26 mountain inns are peppered across the Alpstein mountain range, and the hikes to some of the Berggasthauser are simply breathtaking.

The local tourist board, known as Appenzellerland, has a brilliant website which outlines the route of the trek, which I’ve recreated below. The whisky trail follows the route of the ‘Royal Tour Of The Alpstein‘, an incredible scenic, mountain-filled panoramic route that spans 84km and 5,166m in height gain.

Also known as the Königsroute, it takes you on a outstandingly picturesque trail through the Alpstein.

Whilst it sounds like the route is only for the fit and adventurous, you don’t have to do the full route in one go. In fact most people do three or four mountain huts in a day, maybe up to 9 in a couple of days, and only a handful of people have completed the full 26 mountain inns. As such, many parts of the route are more than suitable for more leisurely hikers.

For the full map, please click on the button below, which will open the map in a new tab for you. Then hop back and keep reading 🙂

The full list of the 26 mountain inns are as follows:

Being in the Swiss Alps, the mountain inns are spread out across rugged, often high altitude terrain. Here are some of our favourite spots on the trail (click on the little dots for more information): 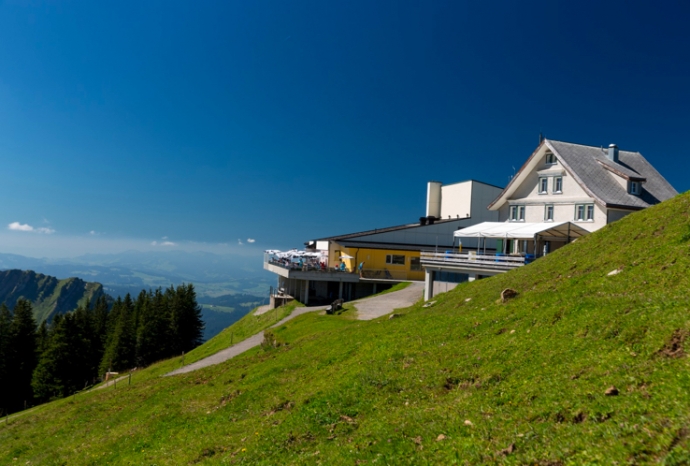 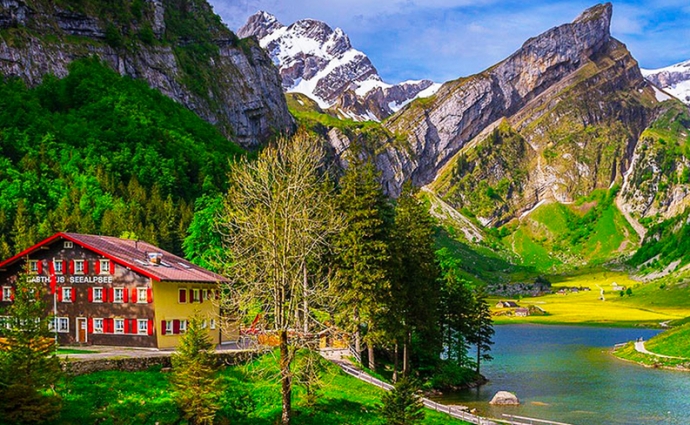 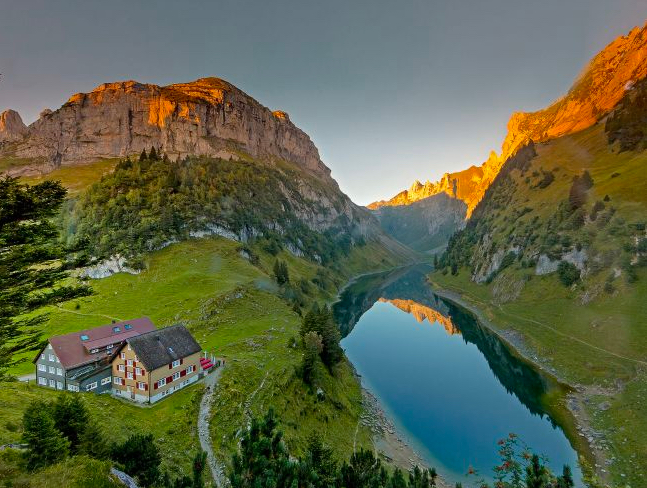 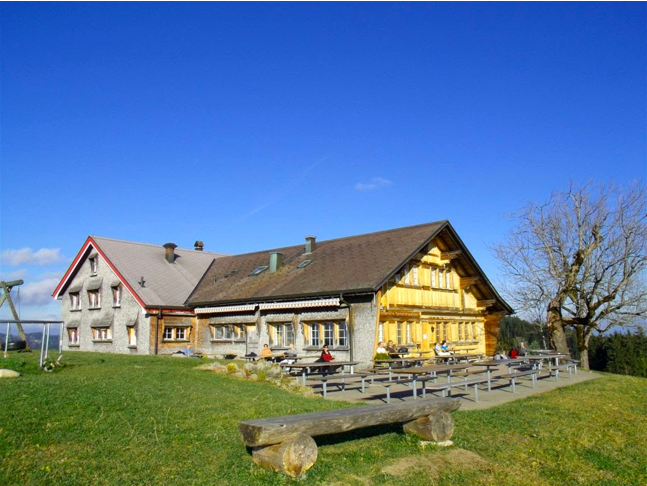 To give you a taste of some of the scenery on offer, check out the pictures below. The first is of Berggasthaus Aescher, number 12 on the list above, and the others are some of the incredible hiking scenery you can encounter in the Swiss Alps. 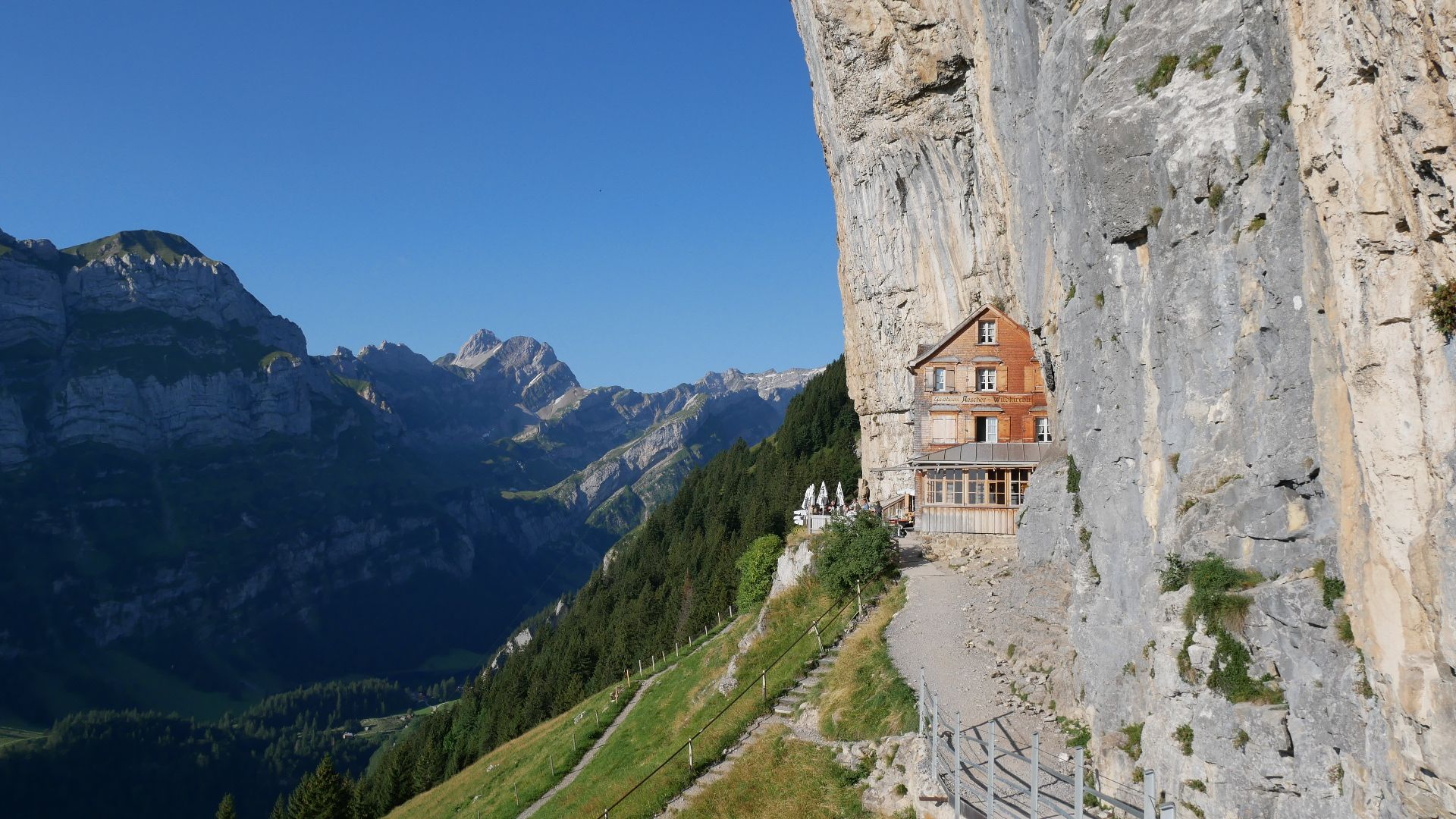 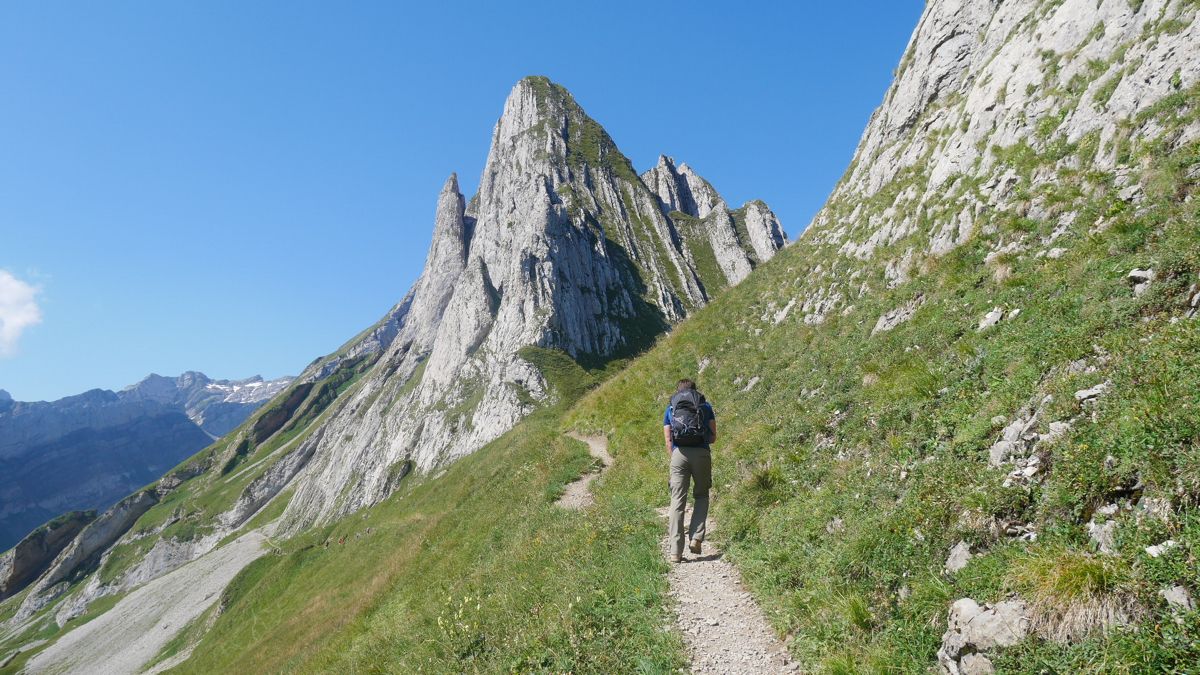 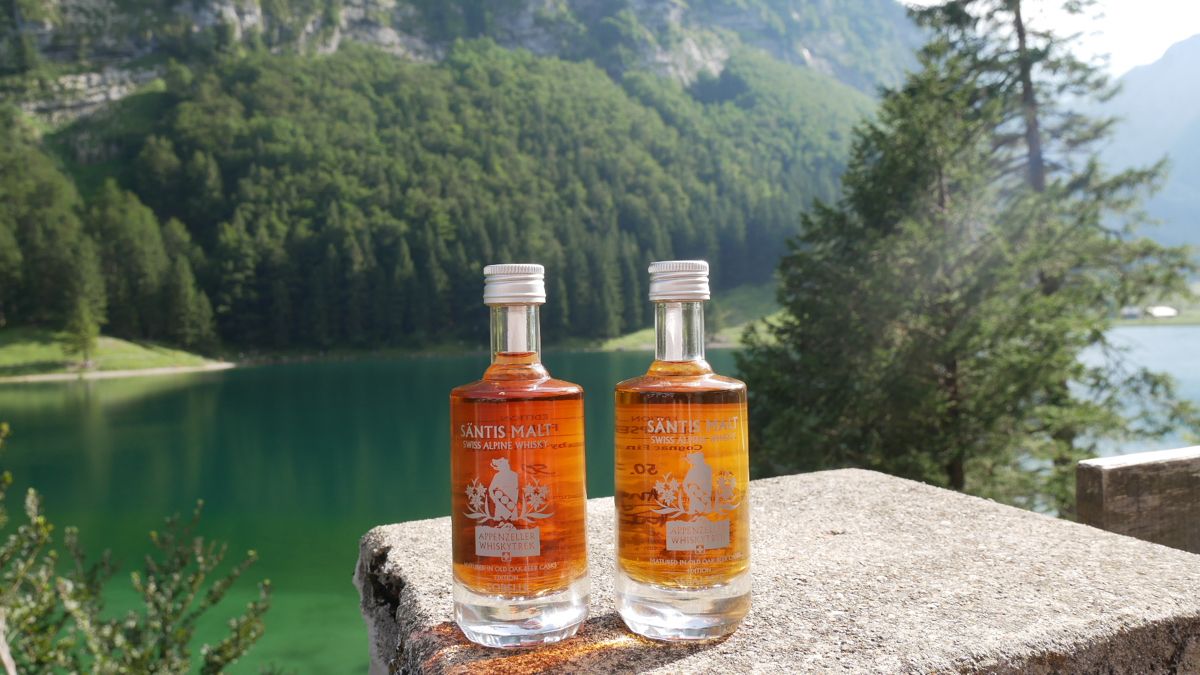 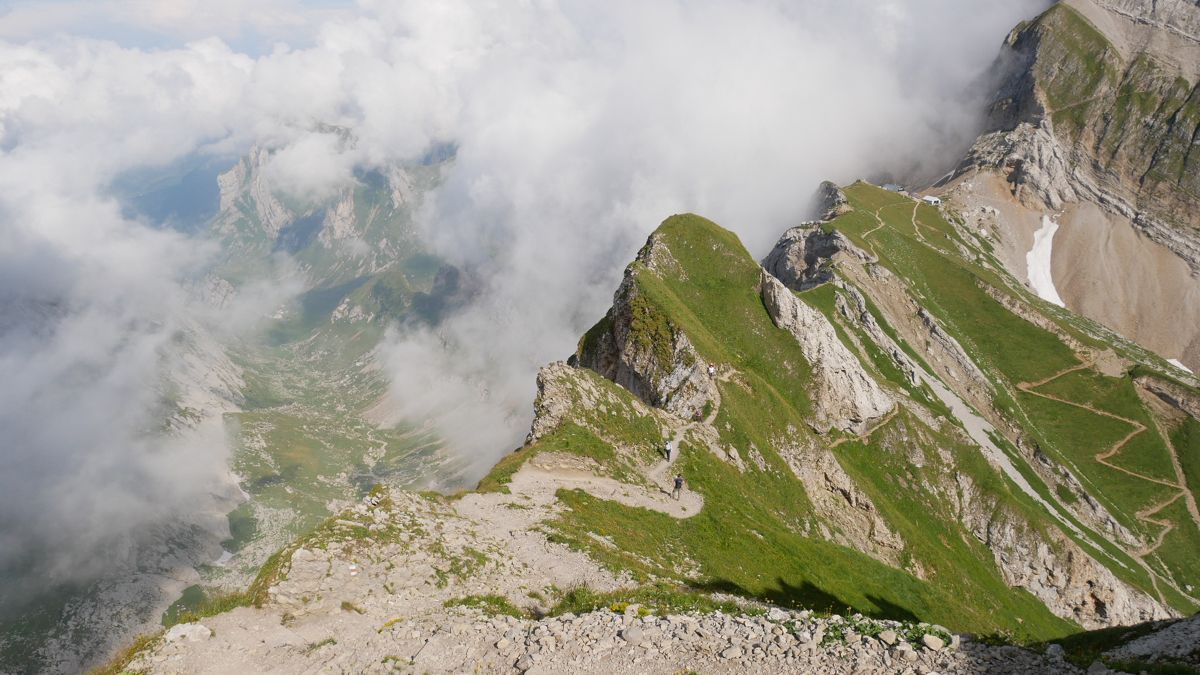 There are some important points to consider when planning your whisky trek trip to the Alpstein. Probably the most important element to consider is the weather. For most people, the best time to hike the whisky trek would be mid to late Spring, and throughout summer to September. October and the winter months bring bitterly cold weather, and the Alpstein is far better suited to skiing than hiking in those months, unless you’re a seasoned winter orienteerer.

You can grab a cheap flight to Zurich, the closest major airport to the Appenzell district. Basel is another option, but is further West, so adds on an extra 60 mins of drive time. Go check Google Flights!

The drive from Zurich Airport to Appenzell takes around 1 hour, if you take road number 1. Bear in mind there are tolls on this road. You can get the train, which takes around 1hr 45 mins, but avoid the bus – you have to change 4 times and it takes over 2.5 hours.

You can make Appenzell your base, or many whisky hikers prefer to start in Weissbad, which also has plenty of hotels. As you work your way around the Alpstein, many of the mountain inns also have beds, so plan correctly and book in advance and you can make a great weekend or week long trip!

Please remember, some hikes are easier than others around the Alpstein. If you are not familiar with the route, and not sure which way to go or which inns to visit, I advise to check your planned tour with the local tourist office before, to make sure all paths  and mountain inns are open, and the level of difficulty matches your fitness.

As you’ll see on the MySwitzerland.com site, there are two main tarrifs on offer: you can opt for the smaller 9-whisky tour for 150 Swiss Francs* (there is also a slightly shorter 8-inn whisky tour for 135 CHF*). You get a voucher booklet to take on your hike, and for each voucher you get a whisky at the nine or eight mountain inns of your choice. Once complete, you can also pick up a collector’s frame at Brauquöll Appenzell (number 27 on the map).

For the full 26 inns, this is known as the TREK 2 finisher tour, costing 390 Swiss Francs*. Everyone who tastes all 26 Säntis malts will receive a finisher trophy on submitting their vouchers.

I’m hoping to do part of the whisky trek in August this year, and if so, I’ll update this post with my own personal anecdotes 🙂

If you beat me to it, have a brilliantly amazing time, and please feel free to let me know how you got on in the comments below.

For final inspiration, check my vlog on whisky trek below, as well as the brilliant video from Jeff Bradford.

My Vlog Of The Whisky Trek

Know Someone Who Should Know About The Whisky Trek?