It was around the time the officers automatic weapon was pressed firmly against my shoulder that I decided to write this blog post.

‘Expect the unexpected when it comes to South American bus journeys‘, I should have told myself at the start of my 5 month trip.

Handcuffs were placed on the guy behind me, and I started scribbling notes about the experience in my diary – which is where this blog post begins. I’ll finish with the gun and handcuff story at the end 🙂

I experienced 6 or 7 long bus journeys when I travelled in South America. From a 17 hour bus from Buenos Aires to Puerto Iguazu, to a 5 hour bus from Sao Paulo to Paraty. They’ve all been different – some have been fun, some not so fun, some during the day, some during the night. As such, I decided to write this blog post for two reasons. 1) For anyone that is planning on travelling round South America, to give you all the info you need to prepare you for things you may encounter before and during the bus journeys. 2) To share some of the stories and sights on some of my journeys 🙂

Let’s start in Colombia. Bogota was my first stop in South America, and after 3 days a group of us took a bus from the main bus station in Bogota to Medellin. I’ll make no bones about it, this bus was the dogs bollocks. It had lots of leg room (a big plus for a tall guy like me). It had in seat screen entertainment (I kid you not). It had onboard WiFi. The bus company was called Bolivariano, and it put UK coach journeys to shame. 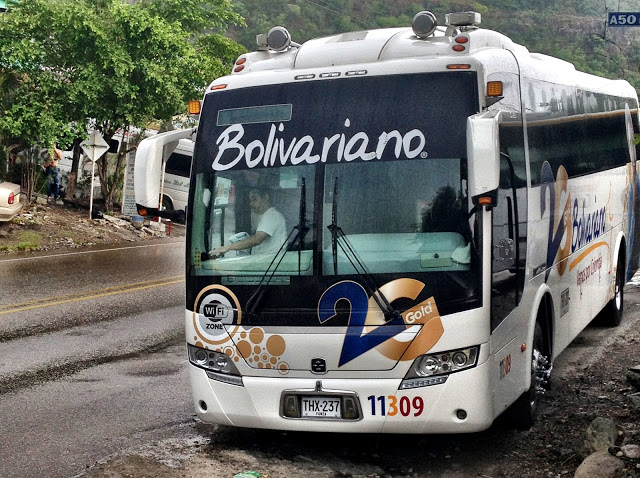 The journey started well. The group was in a fun mood, and the drive was going smoothly. Then we got to the mountains. On the main road between Bogota and Medellin there are many petrol tankers and other heavy lorries which move slowly. That means bus drivers will overtake. We had two bus drivers and they loved to overtake. The highlight for me was when bus driver number one had a call of nature and needed to head to the toilet at the back of the bus. I didn’t anticipate what happened next.

From then on, I decided to close my eyes and sleep. By the time I awoke, we had arrived safely.

The first bus journey by myself was between Cusco and Puno in Peru. I travelled with TourPeru, the journey took 7 hours, and the scenery was amazing. TourPeru have a bit of a bad reputation due to a couple of crashes, but in my experience most of the companies are relatively safe…just cross your fingers that the drivers know how and when to overtake!

My next memorable journey was on a bus from Puno to La Paz, via Copacabana. Puno is next to Lake Titicaca, so any bus journeys to or from Puno have beautiful views. Crossing the Peru / Bolivia border is also a fun experience, as you have to get off the bus, pay a fee, get your passport stamped and walk across the border. 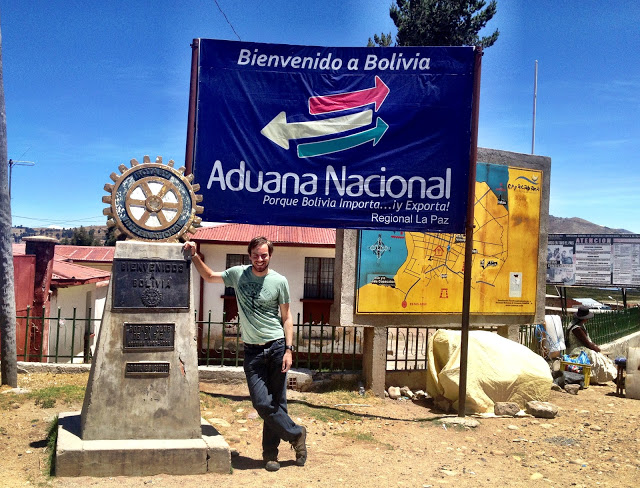 My Dutch friend and I took a photo, hopped back on the bus, and headed to Copacabana. After a quick lunch stop, we headed back to join the bus again….only to be told our bus had changed. And changed it had. No longer were we on a comfy tourist bus, we were now on a local Bolivian bus. We still had 3 hours to La Paz. There’s nothing like experiencing the local transport. 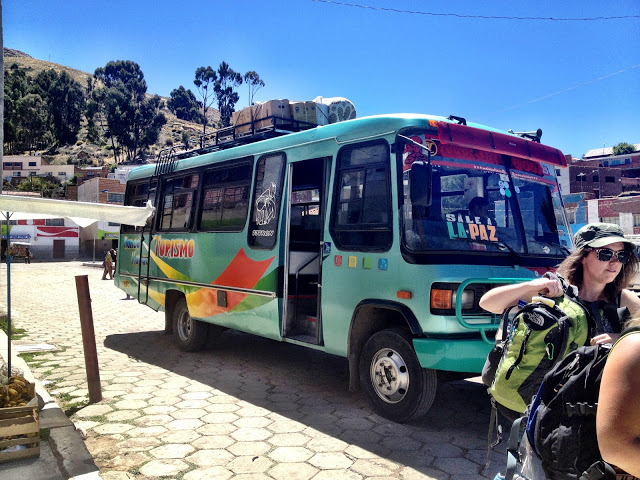 So with my knees scrunched up against the seat in front, the view obscured by a dusty blue net curtain and a local woman sat on a sack of potatoes wearing a bowler hat in the aisle next to me, we headed for La Paz.

Mid way through the journey I had a closer look at the map and realised we must cross a bridge over Lake Titicaca, about 1 hour East of Copacabana. Except as we got closer I realised there was no bridge. Only a rickety looking vehicle ferry which looked like it had it’s last service when Gary Glitter was popular. As we snaked down the road towards the lake, I soon realised the bus would be transported across the lake on said rickety looking ferry.

Unperturbed, we headed to a smaller boat to cross the small stretch of lake. But then I looked back and saw the bus loading itself onto the ‘ferry’. I can only liken what I saw to a sumo wrestler sitting on top of a child.

“Well, there goes my backpack“, I muttered as the small boat coughed and spluttered it’s way across the lake. 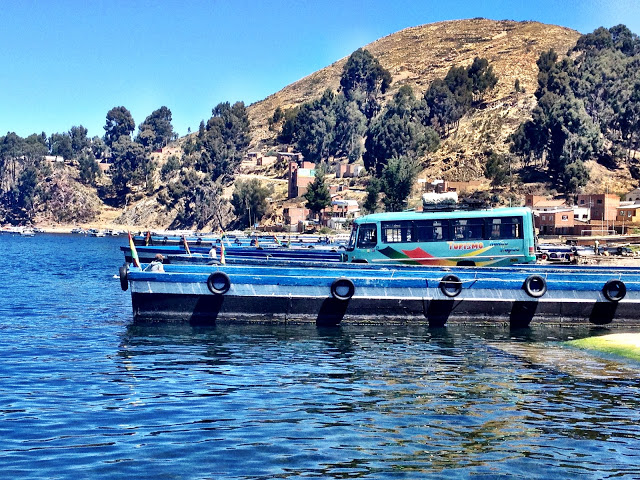 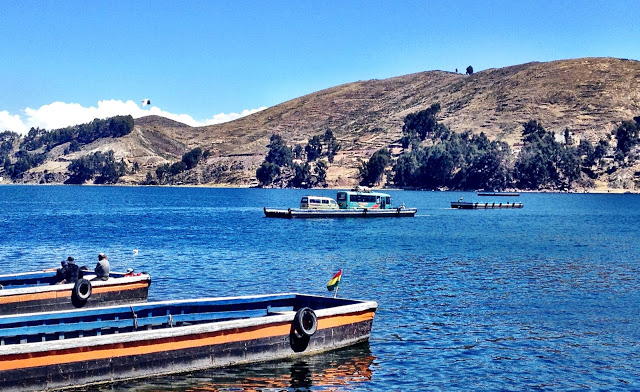 But, sure enough, we made it, the bus made it, and my backpack was accounted for. I didn’t look back to see how the bigger, heavier 60 seater coach got on.

Fast forward one month to Argentina. After an awesome time in Buenos Aires, it was time for me to head North, to Iguazu Falls. This journey was my first overnight bus – a 17 hour journey with via Bariloche.

Buses in Argentina are awesome. The seats are comfy, you get served food (dinner and breakfast on my overnight bus), movies to watch (in Spanish), sweets, and on this occasion, I even got offered a dram of whisky at midnight (perfect after cleaning the teeth 30 minutes earlier). 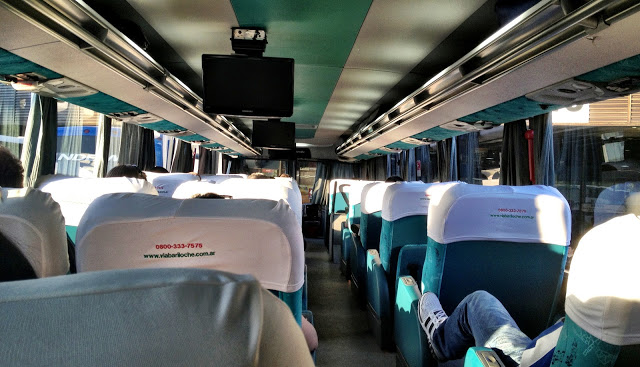 Have you ever had that odd experience where if you think about something enough, it actually manifests itself in real life? That happened to me on this bus journey. Days before heading to Iguazu, I couldn’t stop thinking about that scene in Bruce Almighty where Jim Carrey does his rant from under Niagra Falls, as I wondered how close I’d get to the falls. What was the last film to play on the bus on approach to Iguazu? Bruce Almighty. 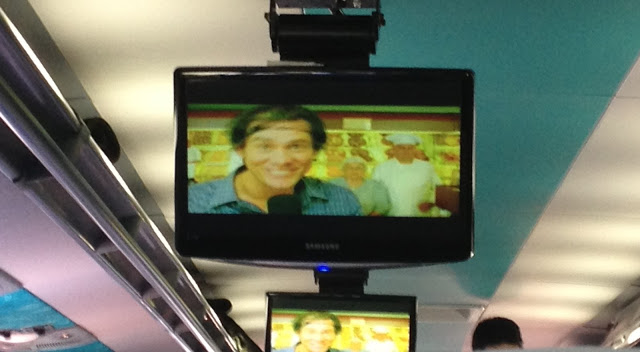 It’s worth mentioning at this point that for long bus journeys across South America, you get offered a choice of seat types. As my friend mentioned in her blog post these vary from cama (the seats fully recline. Actual translation = ‘bed’) to semi-cama (seats recline half way). I didn’t mind semi-cama so long as I had enough leg room, but it’s worth paying the extra for cama on long journeys, if your budget can stretch that far. You will also be given a blanket for overnight journeys, which can come in handy if you’re travelling at altitude (Peru and Bolivia especially).

Crossing the border to Brazil, the buses are still pretty good. Not Argentine standard, but still good. Brazilian buses offer three options – convencional (basic), executivo (a step up from basic), semi-leito (same as semi-cama), and leito (bed). A good website I found to check bus times, seat types, availability and price was Buscaonibus.com.br.

All long distance buses have a fridge near the back of the bus stocked with bottles of water. It is complimentary and self service. Buses also stop every 4-5 hours to give the driver a break and you an opportunity to grab a snack or a drink.

Three English girls and myself set off from Florianopolis, headed for Paraty on another overnight bus, operated by Catarinense. It is a 10 hour journey to Sao Paulo, then another 5 hours from Sao Paulo to Paraty with Reunidas. 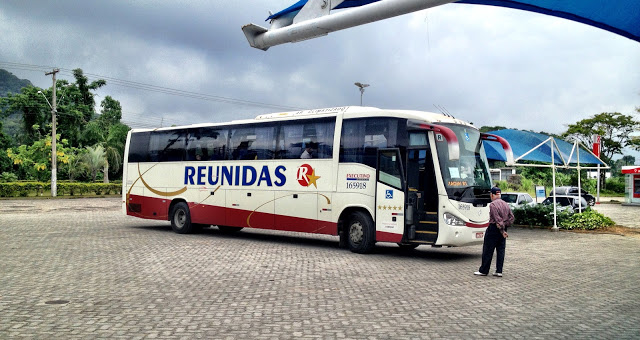 We travelled in executivo seats, which were like a quarter bed….which is appropriate because it felt like I got a quarter amount of normal sleep.

It was the second leg of the journey, between Sao Paulo and Paraty, that the story that started this post happened. I was sat half way down the bus, in an aisle seat, and there was a guy sat over my left shoulder who’s phone would ring every 30 minutes or so, and on the loudest setting. I don’t annoyed easily, but after my quarter sleep it was getting very annoying that he didn’t put the phone – and himself – on silent.

About 1 hour outside Paraty, the bus pulled over unexpectedly. The door opened, and a police offer boarded the bus, pointing at the guy over my left shoulder. A second officer joined him, his right hand placed over his handgun on his right hip. The two moved down the bus and demanded to inspect the man and his bags. Initially the guy put up some resistance, but it was clear they were here for him. The first officer grabbed him, and the second officer leaned over to help, which was when his automatic rifle dug into my shoulder.

Eventually they found a brick size package of cocaine in his bag, and put handcuffs on a boy who could have been no older than 19. Safe to say, he and his phone were pretty silent from this point onwards.

The officers then proceeded to inspect all the other passengers bags, and give a verbal warning to anyone who would be willing to undertake a similar drug running crime. He was wearing shades and looked like an agent out of The Matrix. I doubt anyone would have done.

I didn’t realise it at the time, but that journey turned out to be my last long haul journey in South America. Although I can’t say I miss them, South American bus journeys are an amazing experience. From being sold to at every check point, and anxious immigration checks, though to spectacular scenery and hearing the stories of tourists and locals alike, everyone should experience at least one. Just make sure you stay awake at midnight for the wee dram 😉

Happy 10th Blog Birthday To Me!