On this very day back in 2006, the creative side of my brain was nulled from too much Christmas exuberance, and I built this blog. A day later I wrote my first post.

I’ve done a fair amount of travelling since 2006, that’s for sure!

THE STORY BEHIND SIMON’S JAMJAR

As you may have read in my recent travel blogger interview, when I named this blog, I was struggling for creativity. I looked around the open plan kitchen for inspiration. On the window ledge I saw an empty jam jar and my brain kicked into gear. I wanted to write content and stories that were short and succinct, much like what you could fit into a jam jar. Ten minutes later the blog was born! 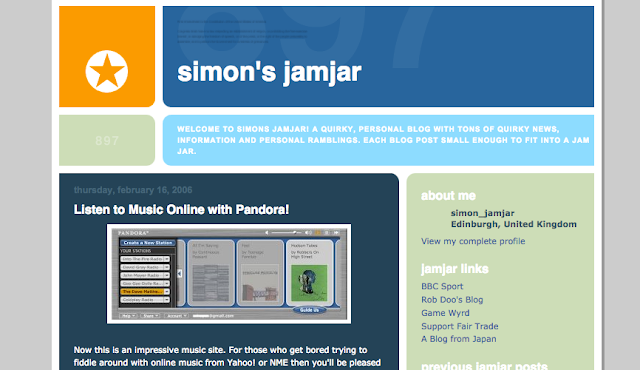 Not the finest of designs, I’m sure you’ll agree!

From starting off as an SEO test bed, this site has morphed into a travel blog and become a big part of me and my life. During my six month, round the world trip in 2012/2013 this blog became my storytelling platform. A way to tell friends, family and anyone who read my blog about the stories and experiences I encountered.

FALLING INTO THE WORLD OF TRAVEL BLOGGING

I was bitten by the travel bug, but my big trip was over in 2013. The London travel blogging scene ended up being my comfort blanket. I could swap stories with likeminded people, reminisce about places I’d visited or get wanderlust for places they had visited and I hadn’t. It was the perfect tonic.

It was this community that really knocked my blog into gear. These bloggers aren’t just awesome people, they have helped and inspire me in more ways than they’ll ever know.

My family have always been incredibly supportive of me in everything I’ve done, but because this blog was so personal to me, it also added a huge layer of pride for them. So when my sister passed away in April 2013, it became even more important for me to carry on writing, carry on travelling, and carry on inspiring.

It might look like all fun and flights, but the truth is building up this blog has not been easy. After helping start 8MS in 2013, this blog has taken up the majority of my spare time in the evenings and weekends.

Hard work, networking, learning, creativity and a genuine love for travel and telling stories has kept going, as well as a continued desire to inspire and improve.

I always aim to visit at least two new countries every year, which, so far I’ve done for the last few years. This is set to continue into 2016. Where? Well, first up, in a few days, I’m off to Kenya!

Africa is an incredible continent, so it will be great to tick off my third country, after visiting Zimbabwe in 2014 and South Africa back in 2009.

I’ll also be ramping up my video content, so be prepared to see more of my face in 2016 and beyond!

This blog has enabled me to meet awesome people, to travel to destinations I could never have dreamt of, and be part of some events I would never previously had the opportunity to attend. So thanks for all the support, thanks for reading, and here’s to another ten years 🙂