Many people told me that if you speak fluent Spanish, you shouldn’t have too much of a problem understanding Portuguese. Herein lies two problems. First, I don’t speak fluent Spanish. Secondly, I didn’t realise how very different the two languages are in a written sense.

So there I was, in Foz do Iguaçu bus station, staring at the menu in the small cafe for what must have been 5 minutes. All I wanted was a sandwich. I tried to order three times – twice I ended up with a small water, and the third time I gave up and ordered a pizza. Not the best start to Brazil, and I was only 3 miles over the border. Thankfully, it was all uphill from there.

From Foz do Iguaçu, I was heading to Florianopolis, touted as the party town of Brazil. But to be honest, after all the long South American bus journeys, I was just looking forward to lying on a beach, and doing nothing.

After arriving early in the morning, I then took a local bus to Lagoa da Conceição, and then another 30 minute bus to Barra da Lagoa. My hostel (Barra Beach Club) was a 120m walk uphill. I’d already seen some photos of the hostel online, but the view in real life was fantastic.

A stones throw from the beach, free caipirinhas at 7pm, and a friendly, mixed crowd to mingle with. Brazil wasn’t too bad after all. 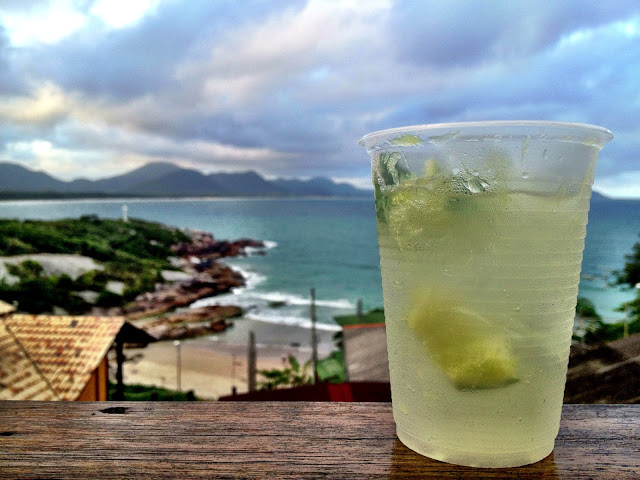 Florianopolis was also my first attempt at playing beach football (after a few beers I might add). A team of me, two Germans and an Italian…you´d have thought we’d have done ok…which we did…for the first 30 minutes. Then it all went downhill.

Floripa (as the locals call it), is also a big surfer town, so after my surf experience in Spain back in May, I decided it was time to get back on the board. It was great fun! But it seems I’m not quite ready for a shortboard. 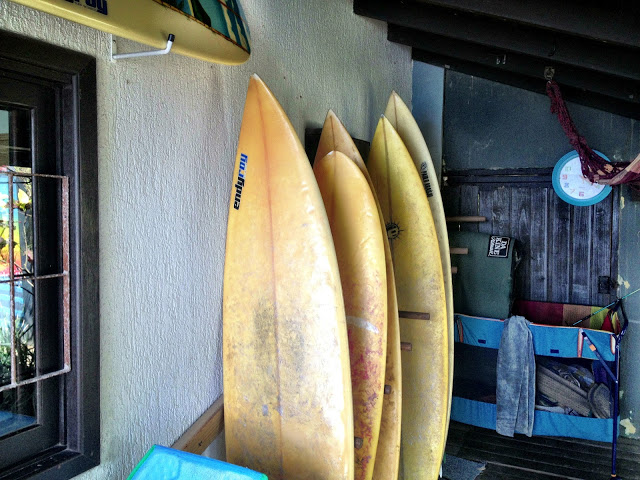 After finishing a course of antibiotics, Florianopolis was the place I got my energy back. It seemed the sun, surf and caipirinhas had given me my step back, so, along with a group of lads, I ventured into Lagao da Conceição, and to the Confraria club. What a place. It was celebrating it’s 9th anniversary as a club – the music was great, the clientele was impressive and the beer flowed. As did the vodka Red Bulls. And the gin and tonics. And the mojitos. We eventually left the club at 6:30am…raded a nearly petrol station for food, and travelled back to the hostel with the sun coming up. Good times!

Unlike most people who stayed at Barra Beach Club, I eventually had to move on. But not before realising three English girls were travelling in the same direction, at the same time. It was the start of a fun group journey 🙂

We grabbed a local bus and walked (well, 3 of us walked) to the bus station, and jumped on yet another long haul bus. This time we were heading for Paraty, another beach town, South of Sao Paulo. It was an overnight bus which took us 10 hours to get to Sao Paulo, and then another 5 hours down to Paraty. The girls stayed in Geko Hostel, and I (eventually) stayed in Misti Chill, the hostel next door.

With so many islands dotted around the bay close to Paraty we all decided to go on a schooner trip to visit more beaches and have a swim in the sea. What a great relaxing day it was. Lounging around in the sun, jumping off boats, sunbathing, sleeping and drinking beer. 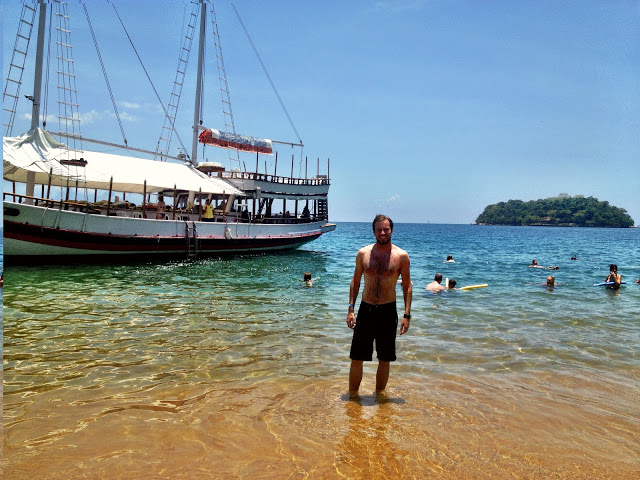 We were there for 3 nights before grabbing yet another bus transfer. This time it wasn’t too long. 3 hours, followed by a 1 hour boat ride…to Ilha Grande. It was hottest day I’d experienced so far on the 5 month trip. Just before getting on the boat, we found out it was close to 38 degrees. Time for a beer, I thought.

Ilha Grande is a stunning island. No cars, lots of jungle, and you have to either trek or grab a boat to find the islands best beaches and sights.

After exploring the small central town of Vila do Abraão on the first day, we set about a 2 hour hike to the infamous and stunning Lopes Mendes beach on day 2.

En route we came across a patch of bamboo, so it seemed only fitting that I grabbed a LOST-like photo before eventually walking out onto the beach. 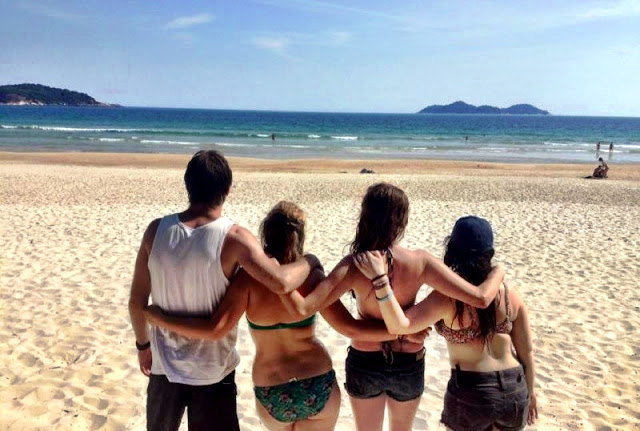 The next few days were spent in a similar fashion to the previous 8 – beaches, beers, hiking, caipirinhas, as well as enjoying a plethora (I’ve been wanting to use that word since I started this post!) of Brazilian food. Safe to say the tan was coming along nicely.

With 3 nights complete on Ilha Grande, it was time for me to move on – this time alone – to Rio de Janeiro. Before I left the UK, I had one highlight that I was looking forward to in each country. Cartagena in Colombia, Machu Picchu in Peru, the salt flats in Bolivia, Buenos Aires in Argentina, and Rio de Janeiro, Brazil.

I took a boat back to the mainland, and jumped on a bus. It would be 2 hours before we reached Rio, so a little nap was in order. I woke up to a car horn blasting in my ear. It dawned on me that I hadn’t been in a city since Buenos Aires, 11 days earlier. It sounds strange, but it was a bit of shock to the system!

We whizzed through the busy streets, and I hopped off the bus 2 blocks from my new hostel, The Mango Tree in Ipanema. I dropped my bags in the 6 bed dorm room and headed straight for the beach. It was around 6pm in the evening, so the lighting on the beach was incredible.

It was a hive of activity. Beach football, beach volleyball, runners, swimmers, surfers, sunbathers, and in the middle of all that, there was me. Mouth open. Gawping (another awesome British word) at the view. I walked to the end of the beach towards the sunset, and all the way back. I had 6 days in Rio, and I was going to enjoy every single one of them.

Rio quickly became one of my top 5 cities in the world. I explored Santa Teresa, Lapa, Copacabana, Leme, the city centre, Christ the Redeemer…and loved it all. So much so in fact, that I decided to try and fit in with the locals on the beach. To try and improve my upper leg tan, I bought myself a pair of zungas, and strutted around posing for the final 3 days.

I thought about coming to Brazil for a short break a couple of years ago, but it never transpired. If you’re thinking of a 2 -3 week break, or if you’re travelling around South America, I couldn’t recommend Brazil enough. It’s a fantastic, laid back, fun country that I’m sure will host a vibrant World Cup in 2014. Just remember to scrub up on your Portuguese 🙂