I started hiking at 2 years of age. Through grazed knees and nettle stings I came to love the outdoors. The fresh air, the views, the feeling of accomplishment once a mountain has been bagged.

Scafell Pike, Ben Nevis and Snowdon have all been ticked off my list, as has one of the toughest endurance hikes in the UK – 24 peaks in 24 hours.

Yet when you speak to fellow hikers in the UK, Cornwall doesn’t really crop up in conversation. But it should, and here’s why.

The South West Coast Path in Cornwall has been rated as one of the top walking paths in the world by Lonely Planet. Having hiking the Tongariro Crossing in New Zealand and the Inca Trail in Peru, I would definitely agree.

The South West Coast Path comprises 630 miles of stunning coastline. From high cliffs and lighthouses, to castles and pristine sandy beaches, Cornwall has arguably far more to offer than the mountain ranges in North Wales and the Lake District.

In early April some friends and I set out to hike a portion of the trail, between Bude and Perranporth, the latter being a place I have visited every year since the age of 11.

Below you will find a 5-day photo journey of our fantastic experience a long the coastline, and I hope you will see how fantastic and unique the South West Coast Path is 🙂

We started in the little known town of Crackington Haven. Nestled in a cove with good surf and a small sandy beach, we climbed up onto the hilltop, between the heather and bracken and were greeted with breathtaking views of the coastline. 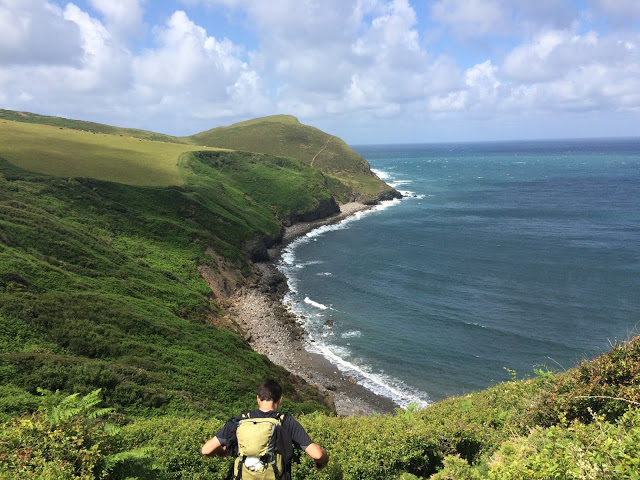 This particular stretch had a lot of up and downs, but as we rose over each jagged hill, we had to stop and take a photo. The only other place in the world where I had to stop around every corner was New Zealand, which shows how special this part of England really is. 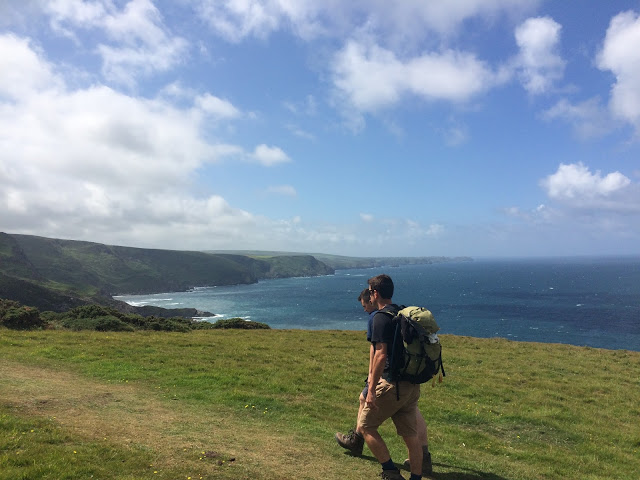 Before long, we had made good head way a long the coastline, and came across some horses on the hillside! They were even kind enough to pose for a couple of photos 🙂 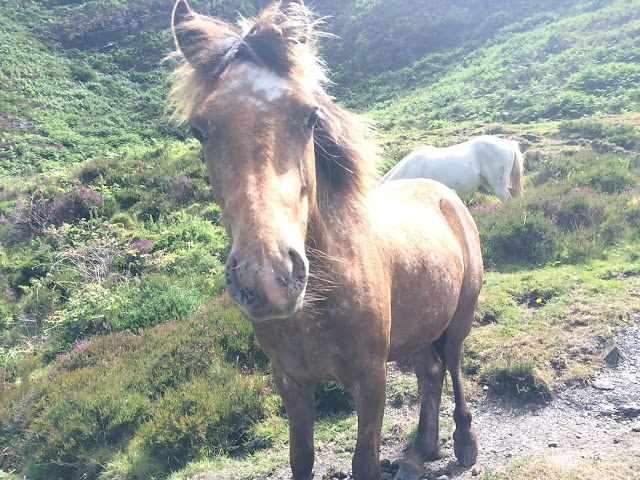 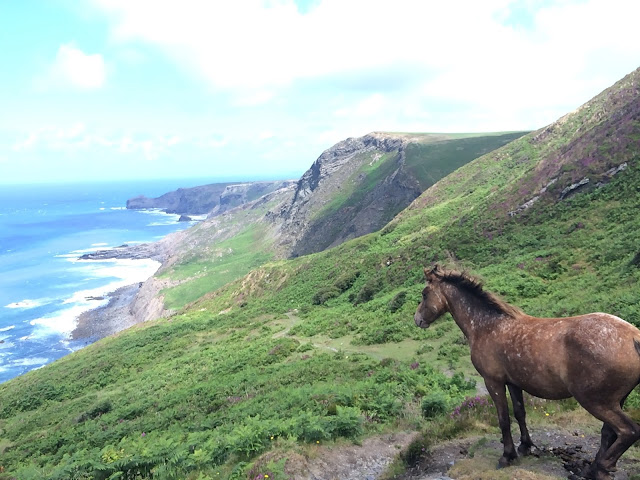 Now that view is definitely something you wouldn’t get on top of a mountain.

We stopped for lunch and spotted a seal in the water whilst munching on a Cornish pasty, then eventually reached the town of Boscastle, famed for the damaging destruction done to the centre during intense flash flooding in August 2004.

Eleven years on and the town has been rebuilt, and is bustling once more, with locals and tourists alike. We dropped down into the town and headed for a well needed pint of Cornish cider. 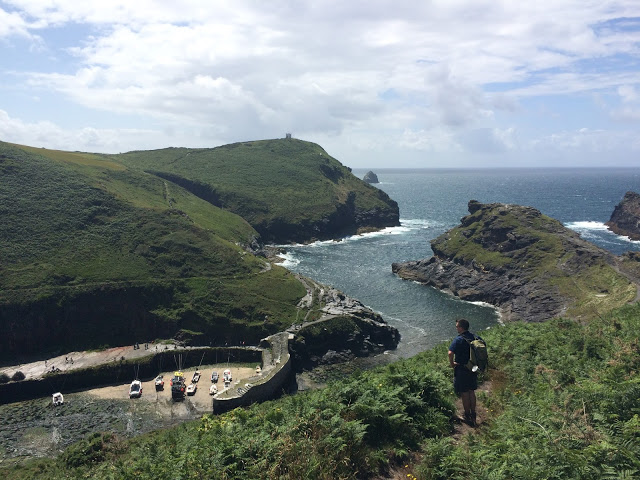 The second day was more of a rest day, following the 8-mile up and down hike on day one. As we were planning on meeting other members of the group in Padstow, we had a quick look around Tintagel castle. Did you know it was the birthplace of King Arthur?

We stopped for a few photos on the clifftop, but the weather was wet and windy, so we quickly headed back to the shelter of the car.

Day three was a monster day – 17-miles of coastline, starting at Padstow. The weather was on our side though, and this made for one of the best days I’ve ever had in Cornwall. The views were simply breathtaking. 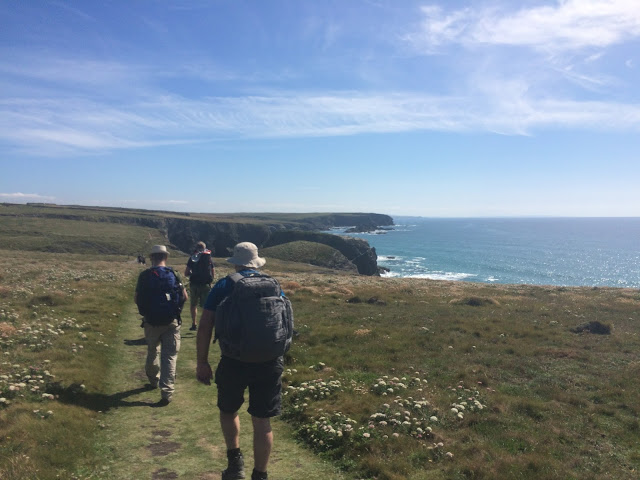 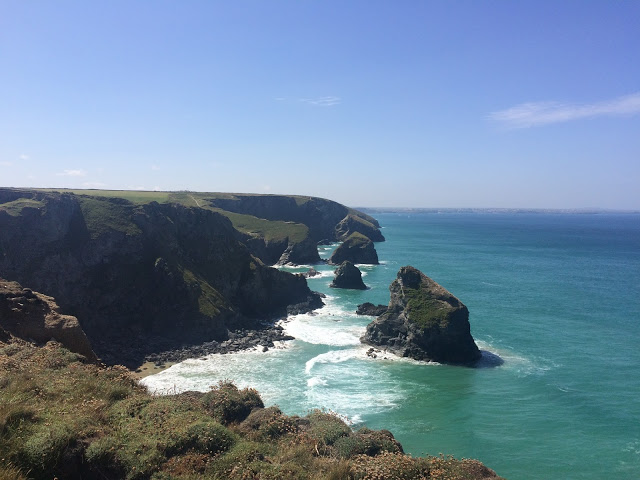 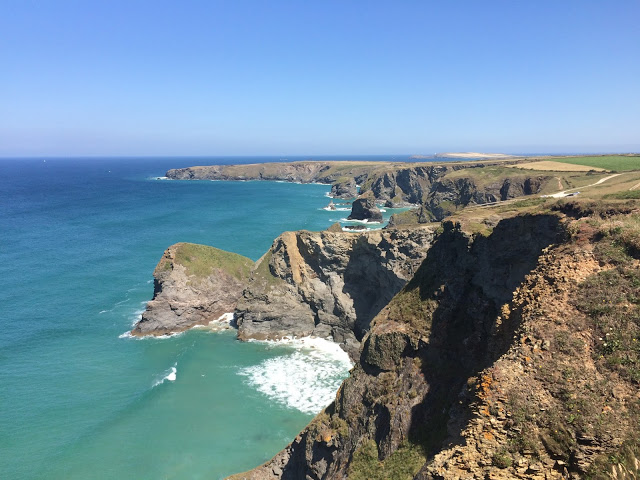 If that wasn’t enough, I’d discovered a bunkhouse just South of Porthcothan, that was owned by the National Trust. With 14 people in our group, and the bunkhouse sleeping 14 people, it was ideal for the weary group of walkers, and a welcome sight after 17-miles.

Located less than 1km from the sea, Beach Head Bunkhouse is in the middle of nowhere. We had the place – and the views – to ourselves. 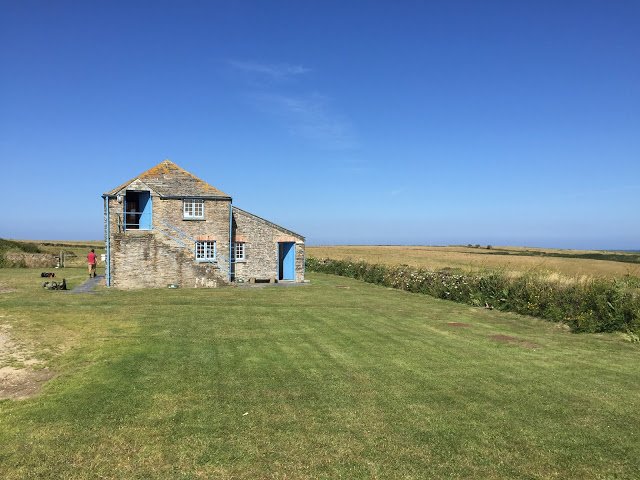 Even better, this place costs £320 for two nights. Split between 14 people, that works out at around £11 per night. Budget hiking and backpacking at it’s finest.

The North Coastal section of the South West Coast Path faces West. Which means you also get some incredible sunsets. 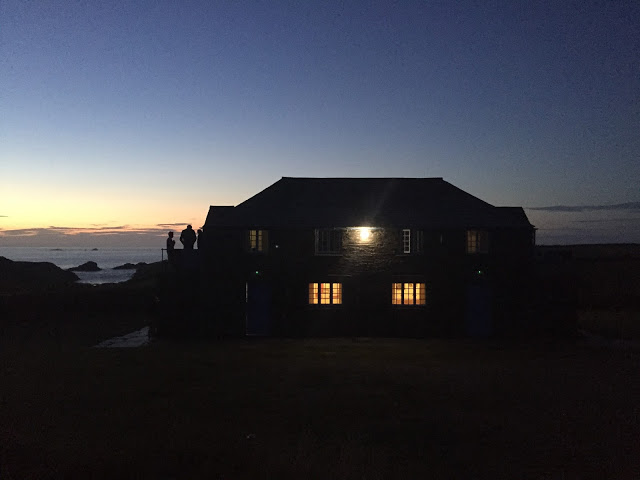 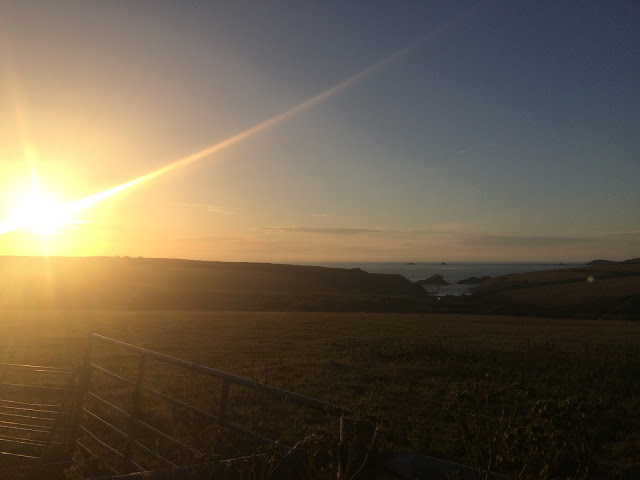 Day four began in bright sunshine, just like day three had ended. Being awoken by seagulls and waves lapping the rocks on the coastline was quite the change from traffic and people shouting back in the less rural areas of England 🙂
On this particular stretch of the South West Coast Path, there are far more beaches to cross. With the sun beating down, it felt very strange to be walking across the sand in walking boots with a big backpack rather than laying down on a towel in swimming shorts!
We went up sand dunes…. 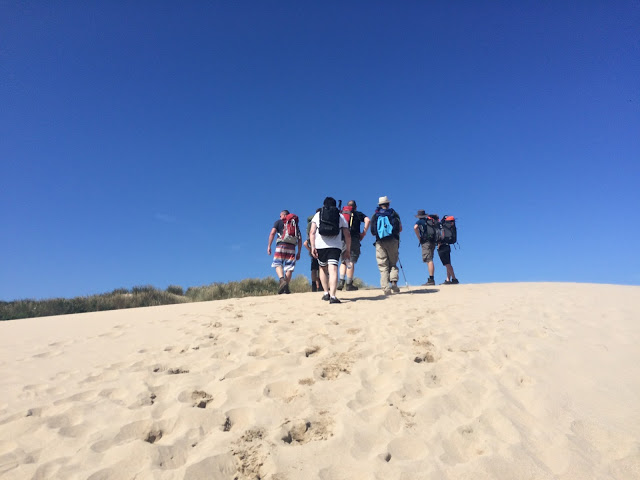 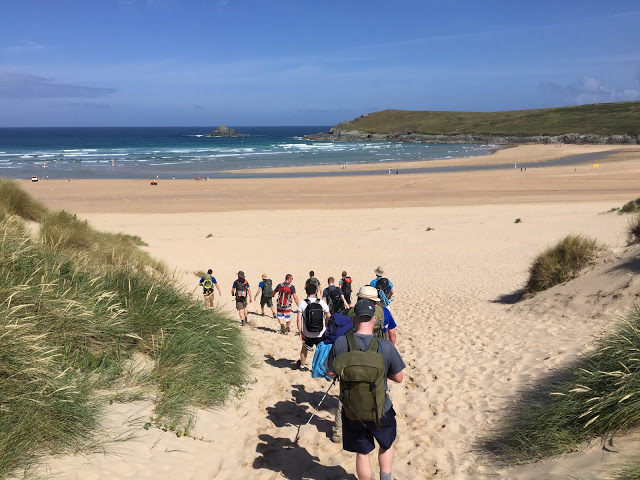 …and across more hillside with incredible views. 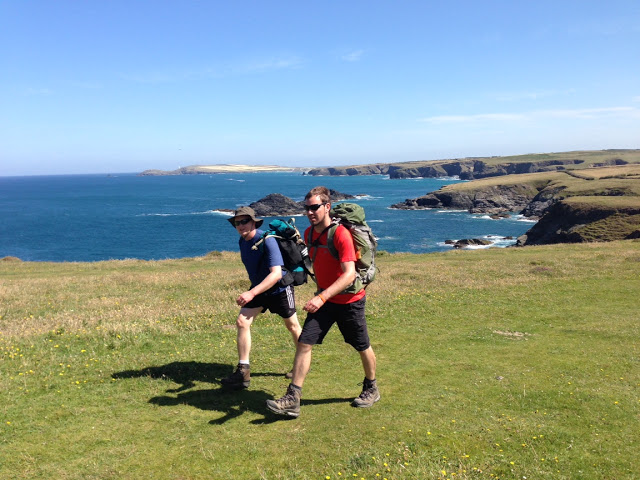 After another tough but highly enjoyable 12-miles, we made it to Newquay for a welcome few pints and a curry.

As the sun rose on our last day of hiking, we were amazed once again that there wasn’t a cloud in the sky. Five days on incredible sunshine. I may be biased, but I don’t think we could have had better views or weather anywhere else in the UK.
The fifth day of hiking was a mixture of beach crossings, up and down hills and cliff top walking – summarising a combination of all the days we experienced so far. 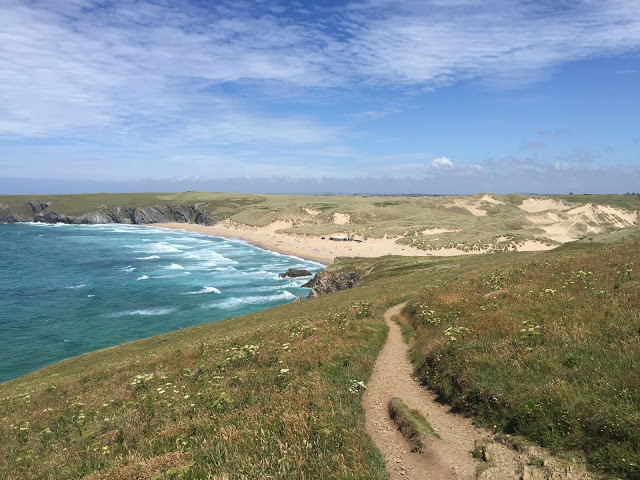 After hiking past the lovely little town of Holywell Bay, the three and a half mile stretch of golden sand at Perranporth came into view. 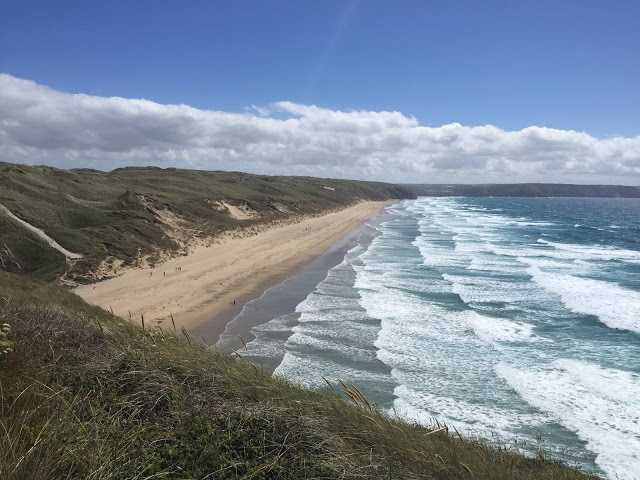 Surfers negotiated the white waves, and fellow hikers marched a long the soft golden sand. We stuck to the cliff top to retain height and followed the coastline a long to Perranporth. 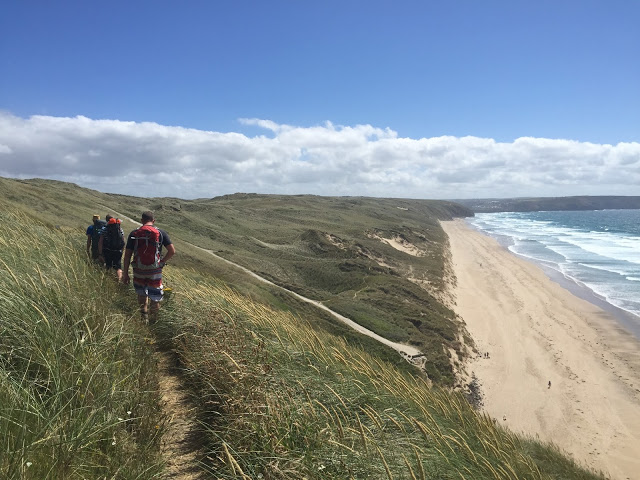 Where else in the UK can you hike 630 miles of superb coastline, with a warm sea breeze and cloudless skies? The heritage, castles, wildlife and scenery make the hike incredibly unique and diverse, and I couldn’t recommend Cornwall enough.
If you love hiking, you have to give the South West Coast Path a try. You can even finish with a cold pint of Cornish cider on Perranporth beach 🙂 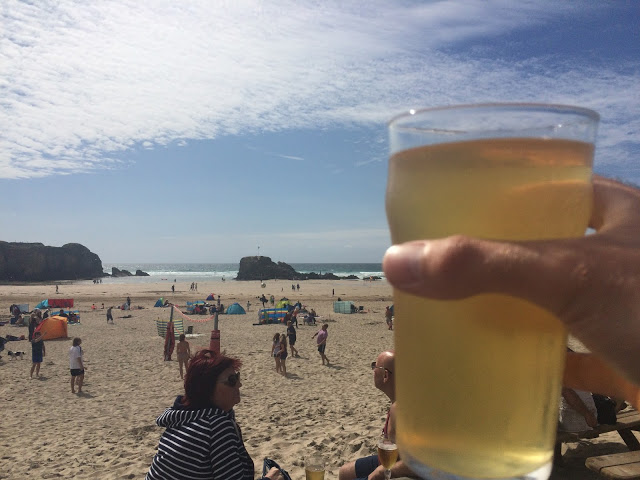 Basque Country: Pintxos, Wine And A Trip To Spain