If someone says to you ‘New Zealand National Park‘, what is the first thing that jumps into your head? For me, it’s the sweeping 360 degree, stunning, panoramic mountain shots in Lord Of The Rings, with dwarves and horses running across stunning landscape.

Ironic really, because the Tongariro National Park is exactly that – a breathtaking, sweeping volcanic landscape. 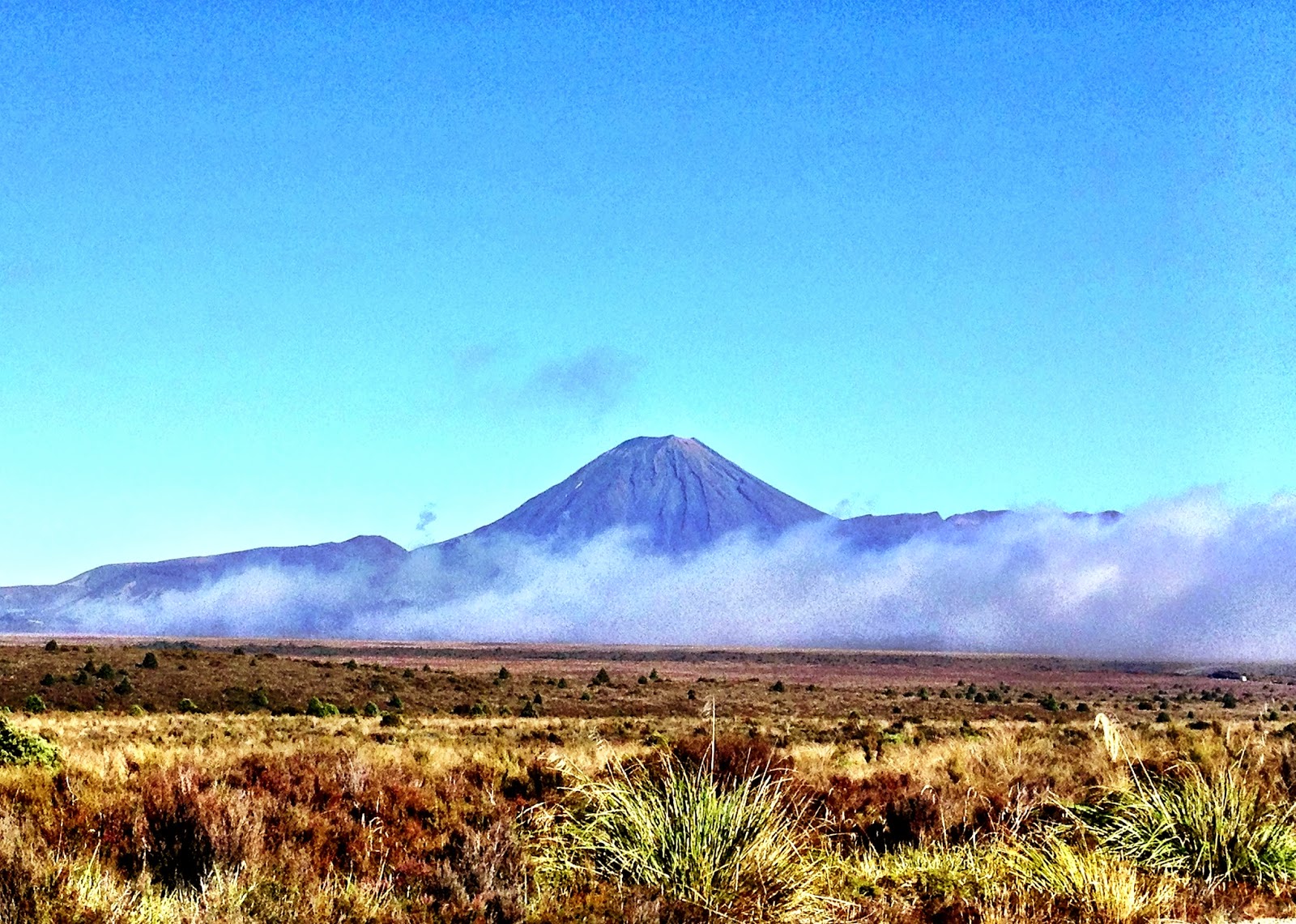 I’d never heard of Tongariro before I arrived in New Zealand. Shocking, considering  that a) I love hiking, and b) the Tongariro National Park is the second largest National Park in the world, behind Yellowstone in the USA.

If you’d not heard or known about the area before Lord Of The Rings, you might have heard about it’s namesake mountain in August 2012. Dormant for over 115 years, the seemingly sleepy Mount Tongariro volcano came to life, firing ash and rock more than four miles into the air, and hampering travel both on the ground, and in the sky. A huge cloud of ash covered parts of the North Island like a grey blanket. It then erupted again on November 21st, 2012.

Whilst there has been no major activity since, steam and gas plumes from the Te Maari area are always present, and unfortunately the full crossing wasn’t possible because of the safety risks the steam and gas posed.

Still, you could still climb over the other volcanos, and up the side of Mount Doom (Mount Ngauruhoe for non-Lord Of The Rings fans). I’m a big fan of the outdoors and climbing mountains, so this wasn’t to be missed.

In order to see as much as the Tongariro Alpine Crossing and National Park as I could, I needed to get on the bus in Taupo, and leave by 6:00am. After a little nap on the coach, my fellow travellers and I looked left out of the coach window and saw steam and gas bellowing out of the mountain top, as we approached the entrance to the National Park. 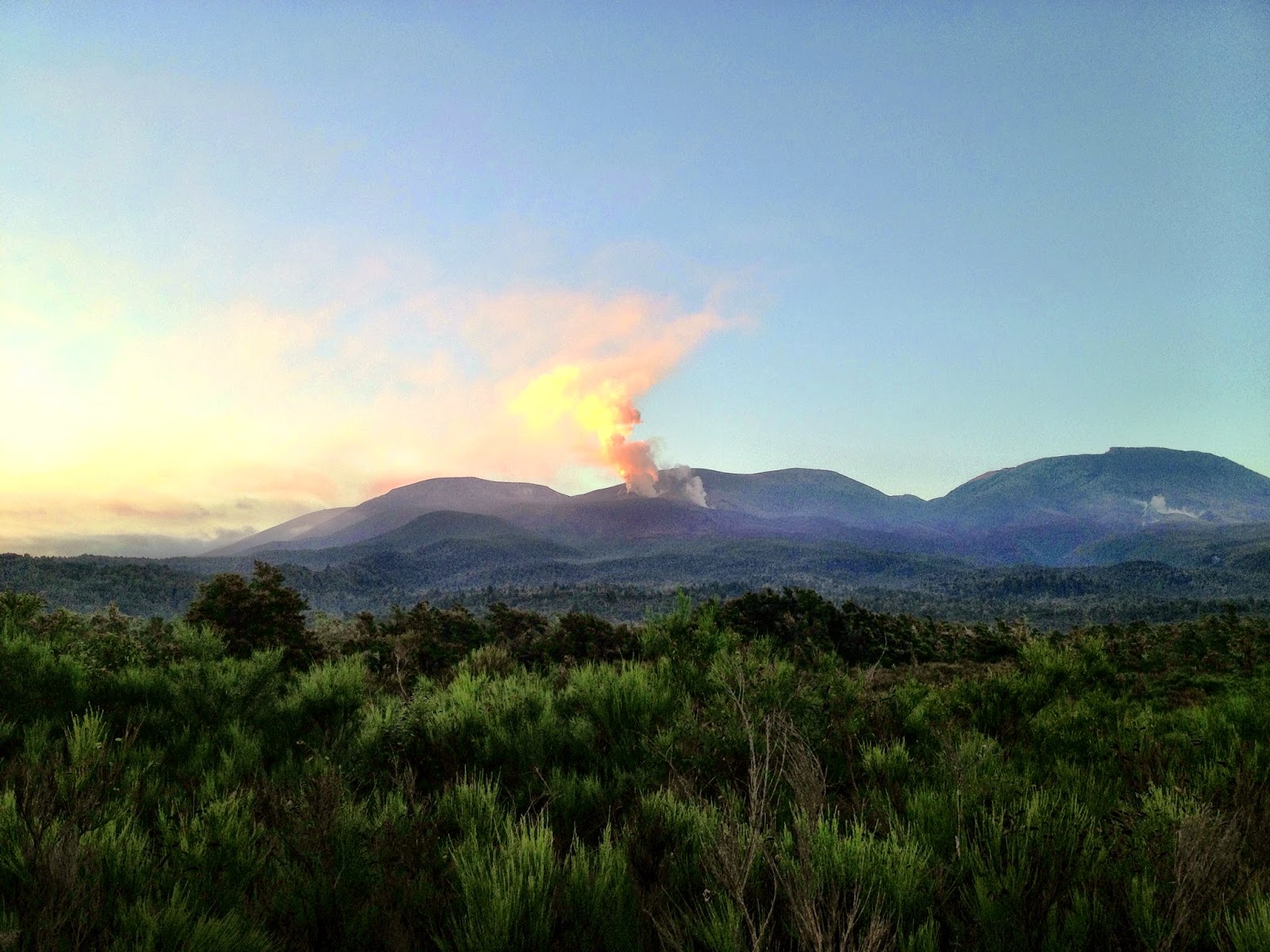 Thirty minutes later, after a quick nibble on a banana to power my sleeping body, I stepped off the coach with the sun still hiding behind the mountains. At first glance, the Tongariro National Park looked like a moonscape. It was a mixture of volcanic rocks, tussock grasses, moss and different sized rocks for as far as the eye could see (which actually wasn’t that far as the sun hadn’t risen properly).

We set off. Best foot forward. We turned the first corner after 30 minutes to see the sun slowly creeping over the side of Mount Ngauruhoe, 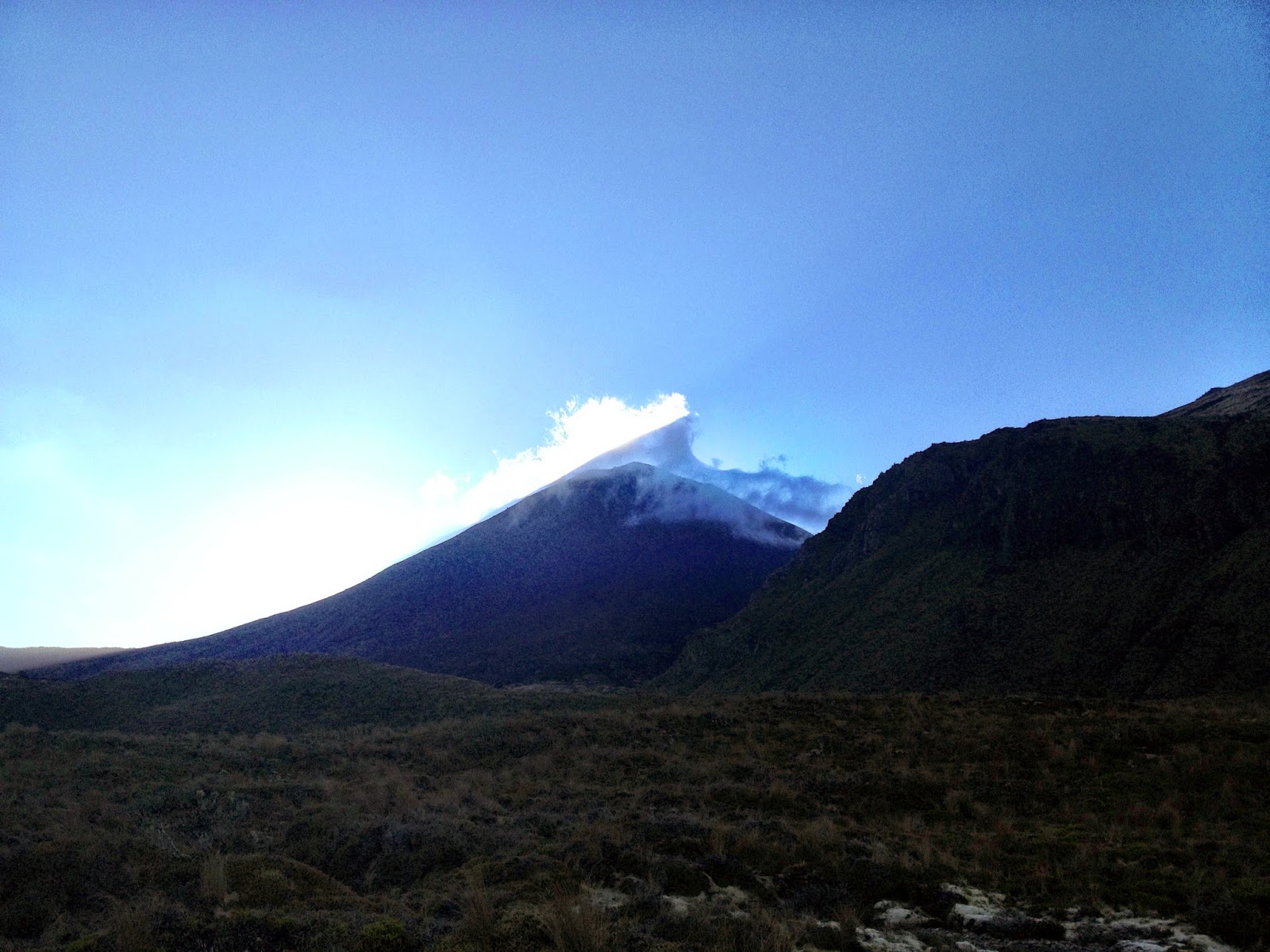 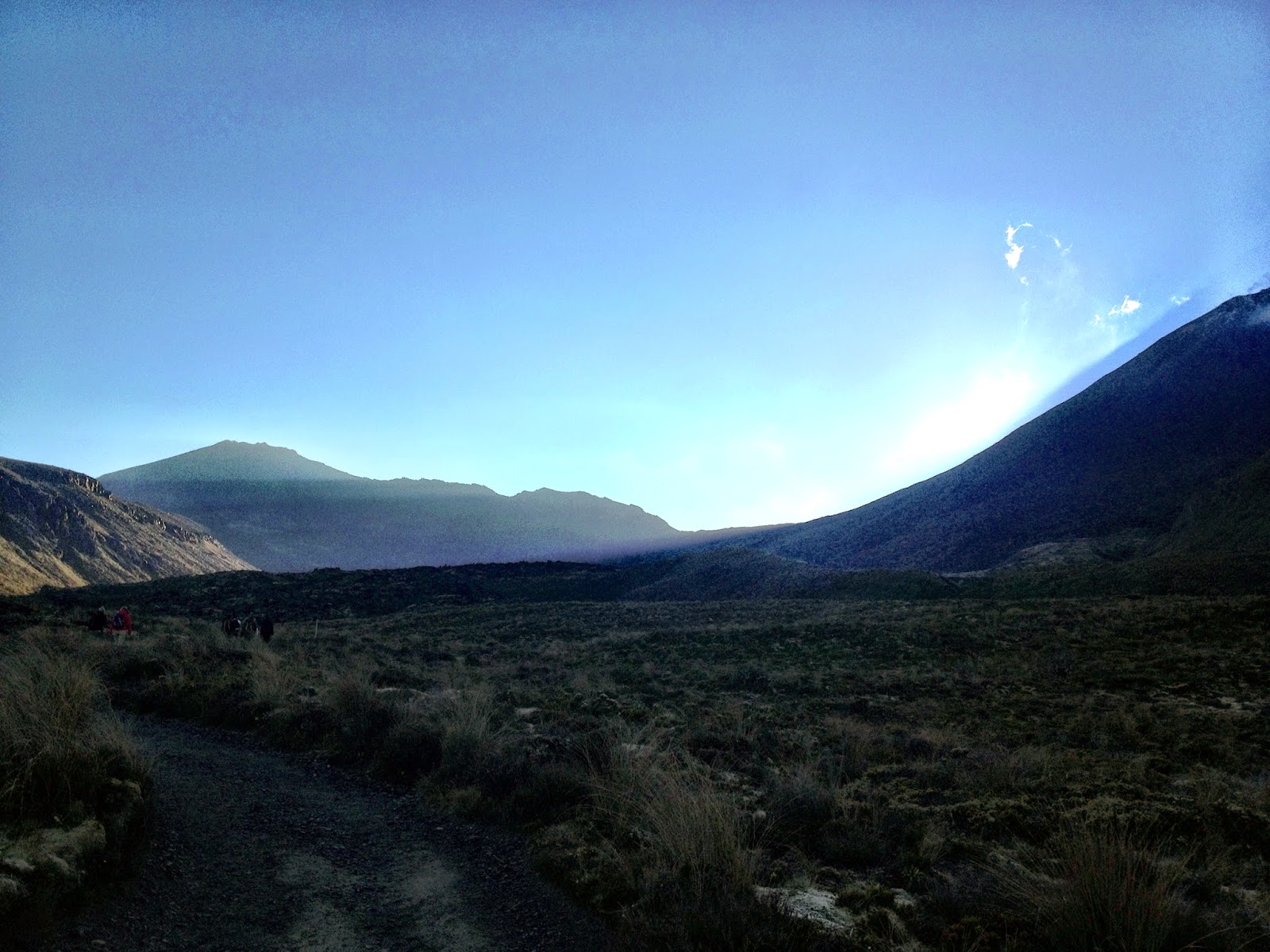 After an hours hiking, we reached a small waterfall at Soda Springs at the base of the main track up to the South Crater, and then we started climbing. It took another hour to reach the South Crater, but it was worth it. We were now at 1,650m, and walking on the shoulder of Mount Ngauruhoe. 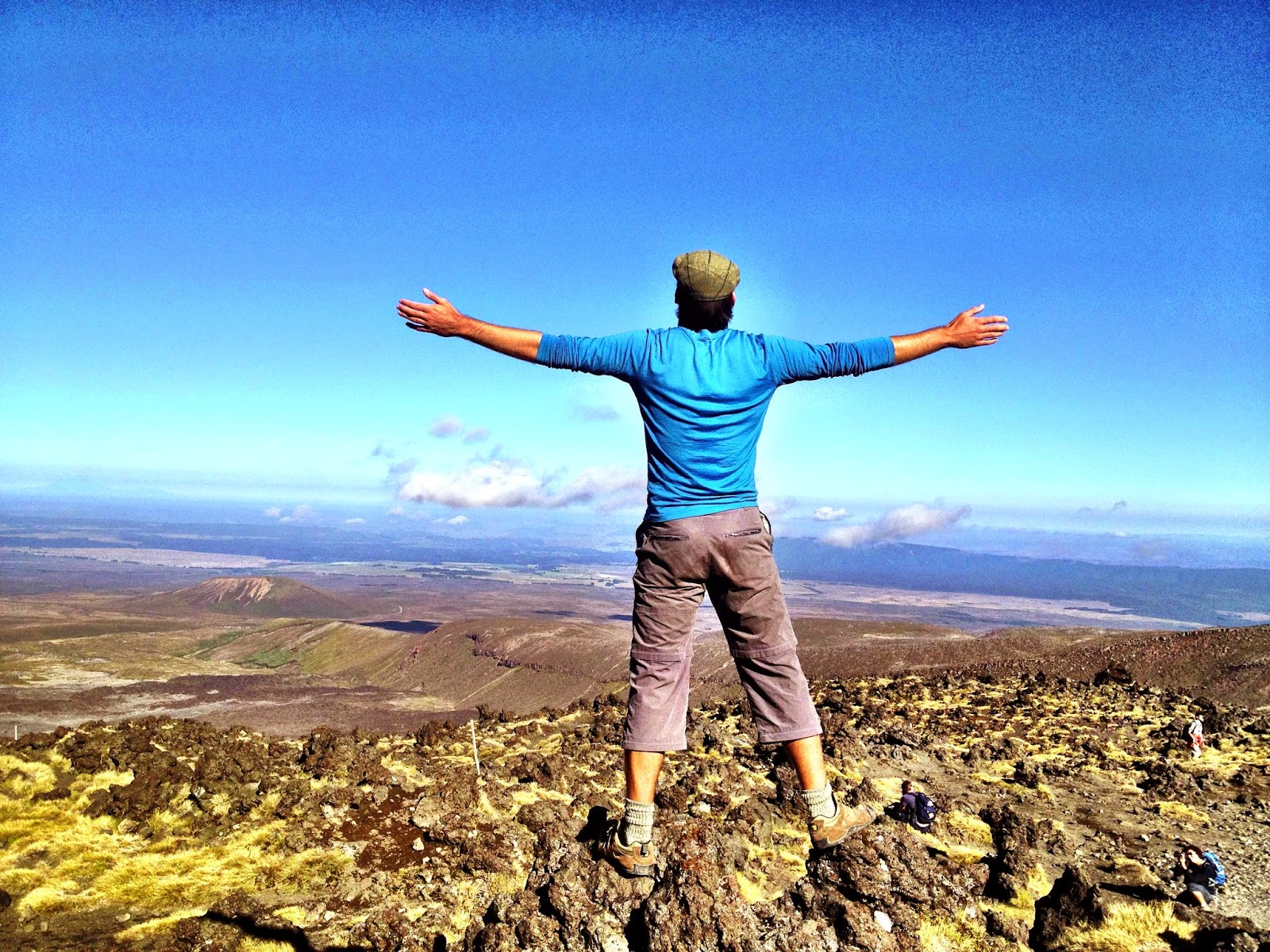 Like most of my days in New Zealand, this was another blue sky day. We climbed up to the Red Crater, and looking back at the South Crater path, we had a brilliant vantage over to Mount Ngauruhoe. The view was incredible. 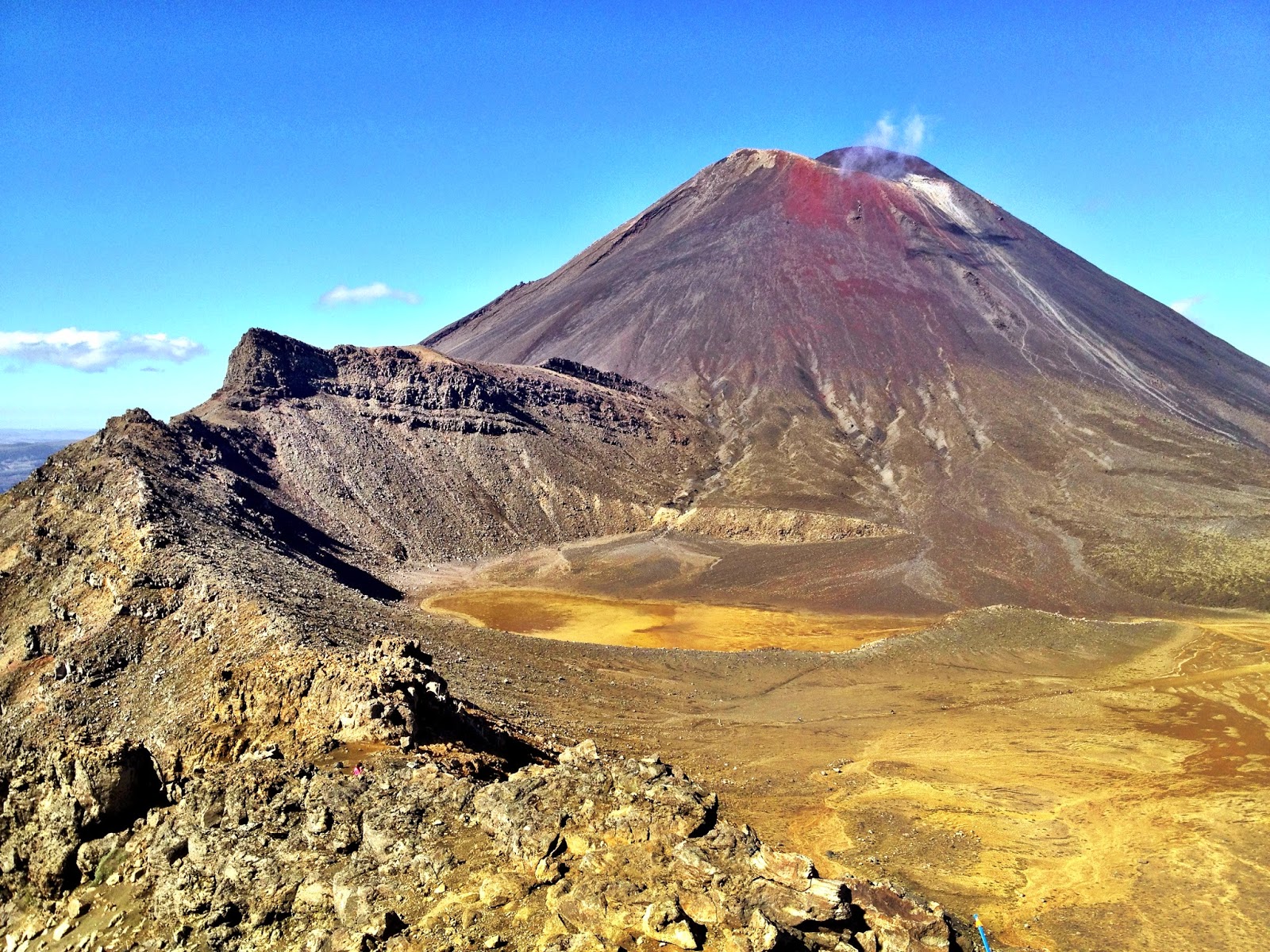 It was here that we were told a story about the history of the area. As well as being an area of stunning natural beauty, Tongariro also has a big historical and cultural significance. When Maori chiefs passed away, they were brought up to these mountains and buried in order to be naturally cremated by the volcanic fires. I also heard the same story on numerous occasions about why the North Island was covered in geothermal and volcanic activity.

A wide area from the Bay of Plenty, all the way past the south end of Lake Taupo (including Tongariro, Ngauruhoe and Ruapehu), is full of volcanoes, geysers and hot springs. According to Maori legend, all this activity started because of a great priest called Ngatoroirangi and a male chief, called Tia. After arriving on the North Island, Tia had initially explored the eastern side of Taupo, and Ngatoroirangi headed further south to the then lifeless mountains in Tongariro. He climbed to the top of one of the peaks and was overcome by the terrible cold winds. He called upon his sisters in the ancestral home of Hawaiki to send him heat for warmth. The fire gods answered the sisters prayers and the fire came, travelling under the sea and land, breaking the coastal surface at the Bay of Plenty, and running as a line through Rotorua, Taupo and down to the mountains in the Tongariro National Park, igniting the volcanoes and geothermal areas as it passed.

Given the view from where I was standing, that would be quite the video to capture with a drone!

We turned back around, and looked for 360 degrees across the shoulder of Mount Tongariro. The sky was so clear that we could just about make out the outline of the distinct Mount Taranaki, over 80 miles away on the West coast.

We headed up and over to the safe section of Mount Tongariro (1967m), then dropped back down the the Red Crater, to overlook the Emerald Lakes and sit down for some lunch. 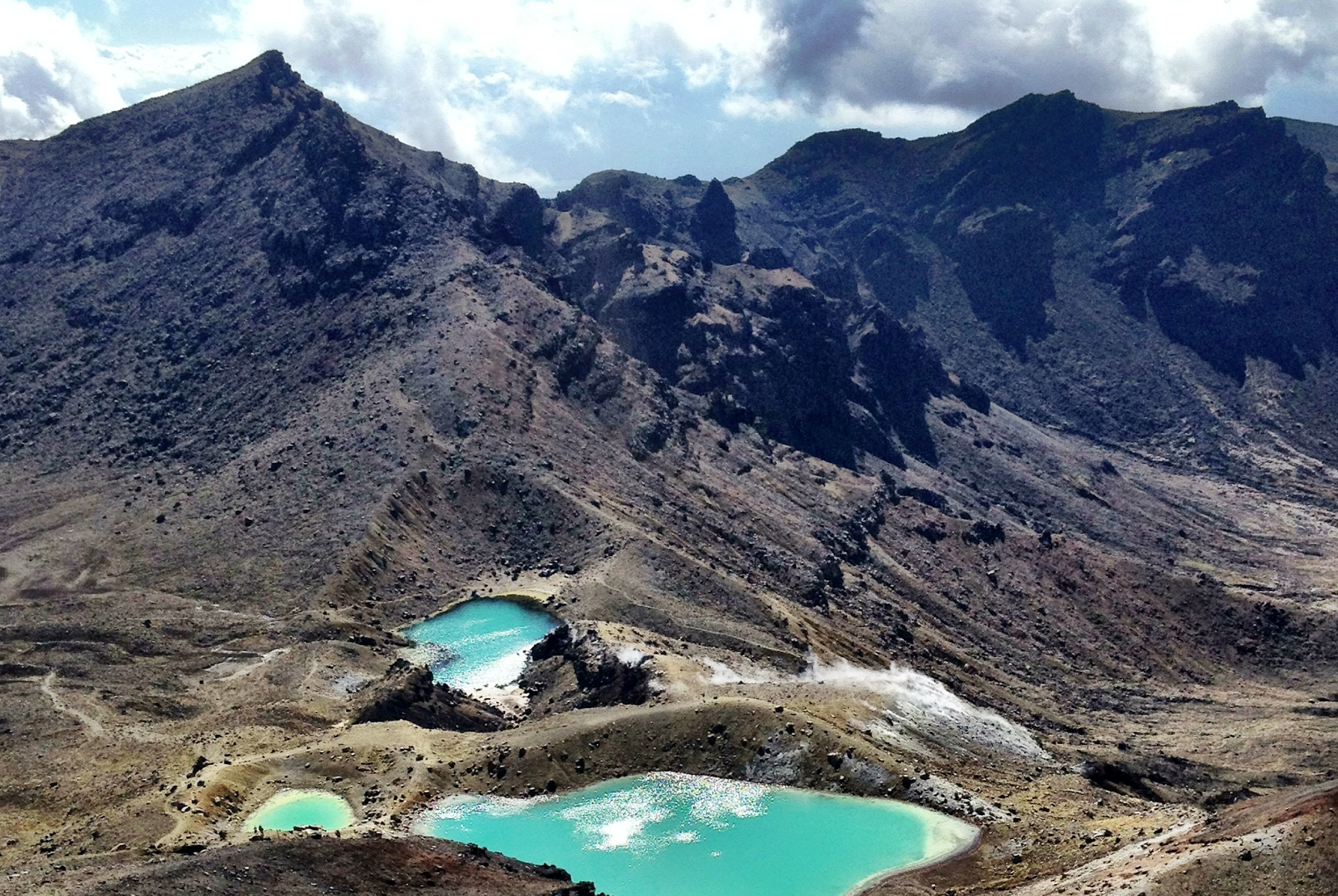 I was just about to park my bottom on the rock when I noticed parts of the ground were steaming. My initial unease soon passed, as I recognised everyone else was sat down in the same area…then I found out why. The rock was part of the most southerly section of Mount Tongariro, and after it’s eruptions in 2012, the volcanic activity still passes through the rock underneath, warming the rock at the surface. I’ve never been so comfortable eating sandwiches high up on a mountain!

Once lunch had settled, I got up from my comfortable spot, and started heading back down the path. On the journey back, the lighting was still fantastic, so our bus driver pulled over so we could take one final snap of the Tongariro and Ngauruhoe mountains.

It was a shame I didn’t get to complete the full crossing, but I was extremely happy with my experience.

It was great to see the mountains and volcanic rock close up, and it was good to partially hike one of the most epic treks in New Zealand.