Papua New Guinea is often described as the land of the unexpected, and this is no more apparent than in the Western Highlands city of Mount Hagen.

It is amazing to think that much of the land and tribes in the Western Highlands was only first discovered by gold prospectors from Australia in the 1930’s. Despite Mount Hagen growing substantially in the modern day, there are villages only a few kilometres away that are still cut off from modern day civilisation. Papua New Guinea is still steeped in mystery, and claims to be one of the last frontiers on Earth, and for those very reasons, I couldn’t wait to start exploring.

Flying into Mount Hagen over the fertile Wahgi Valley, it struck me that this area of Papua New Guinea was vastly different to Kimbe Bay. We had swapped volcanoes, plantations and coral sea for fertile farmland and highland jungle villages.

We were picked up at the airport by our beaming Rondon Ridge driver, Paul, who had me in stitches when he held up a sign saying ‘Welcome to Mount Hagen Mr & Mrs Heyes‘. I decided my dad would wear the skirt on this part of our PNG journey 🙂 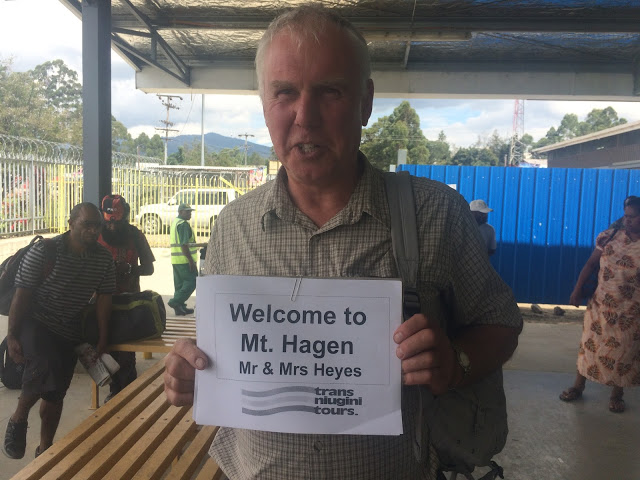 Driving through Mount Hagen it became apparent that not only the landscape was different, but there was also a different cultural vibe. Kimbe Bay was laid back, but Mount Hagen was bustling. Centred around a vibrant market, there are more businesses, more shops, and more industry. Mount Hagen is a busy town. It is Papua New Guinea’s third largest city, and is easily one of the fastest growing.

Our bus crossed a rickety old bridge on the outskirts of town, and immediately the hustle and bustle of city life was replaced by idyllic rural life, where families tend to their gardens on either side of the road.

That bridge acts as the state line, and everything on the rural side of the bridge is owned by the villagers. In fact every square metre of land is owned by clans and families, showing just how important sustainable farming is to everyday life in Papua New Guinea.

We turned right at a fork in the road and began the climb on what is effectively a rocky, dusty track that winds it’s way between the village gardens and leads to Rondon Ridge, a luxury eco-property that sits high on the hilltop overlooking the Wahgi Valley and Mount Hagen.

Looking over the beaming smiles and the friendly, exaggerated waves of kids by the roadside, we gazed at the lush volcanic slopes that seemed capable of growing anything. Sweet potatoes, corn, cabbage, cauliflower, beans…you name it, they grow it.

As we climbed higher, the winding road began to give us staggering views of the Wahgi Valley, but it was only once we reached Rondon Ridge, that the astounding beauty of the valley became apparent. Blue sky, clouds, sunshine, lush greenery and a white mist lingered to provide us with a breathtaking view. 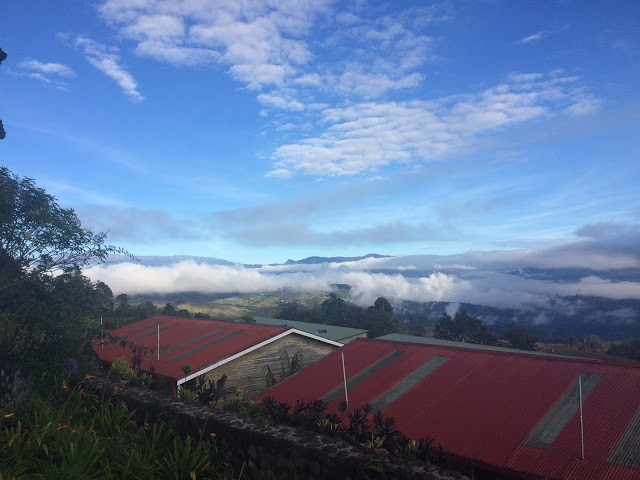 The following morning, we met our tour guide, Raymond. Raymond has lived in Mount Hagen his whole life, and speaks superb English through a dark, bushy beard.

“Does everyone still live in castles in England?”

Raymond’s opening gambit put me on the back foot. “In school we learning about George and the dragon, knights in armour and that people travelled by horse and cart and lived in castles. That is the perception of England for many school kids in Papua New Guinea because those are the stories they learn in school“.

Whilst families in Papua New Guinea sometimes have access to TV and newspapers, it is rare that they keep up with the news on a weekly basis, let alone daily.

Part of me was surprised that England was perceived in such an archaic way, but then I thought about the real perception if these villagers did have access to the news. Drugs, crime, racism, immigration problems…the other part of me actually preferred the medieval perception.

“We have a pretty big drugs problem in England“, said my dad, jolting me out of my thoughts and pretty much reading my mind.

“We grow loads of marijuana, but we simply use it as medicine: we feed it to pigs when they get sick.“

I immediately pictured loads of pigs lying on their backs, laughing, and smoking spliffs.

We continued down the road, and eventually reached our first village, Kaip, where we would take a tour through some lush gardens owned by a local man and his family.

We met some of the local kids and started walking down the makeshift driveway, when my dad veered off to the right.

“This is a lovely colour of hibiscus“, he began.

“Hibiscus. It’s also a plant that we grow in England“, said my dad.

“You know the names of these plants? We don’t know what they are called….we just call them all flowers“, said Raymond.

What began as a village tour turned into a plant lesson. My dad is a landscaper and nurseryman by trade, and his throwaway comment about the Hibiscus had the locals entranced. 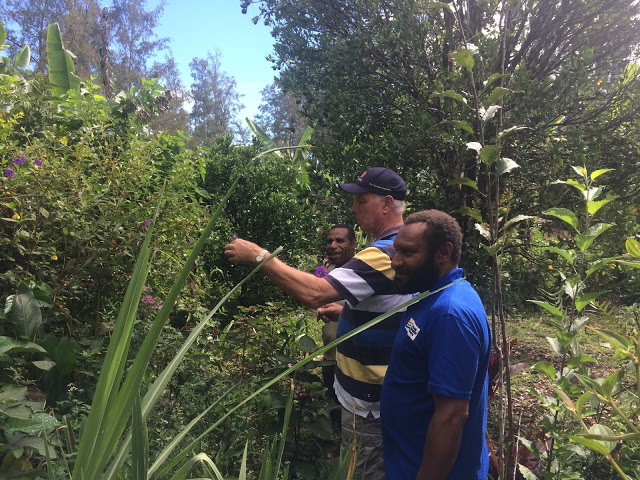 He was led around the garden for almost an hour, the owner and Raymond asking him what each plant was called, writing it down, and then taking a picture on his phone so they could remember each one. 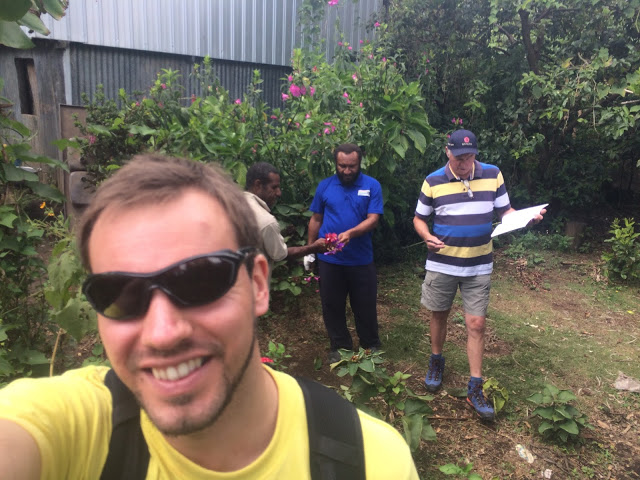 In the end my dad named 24 different plant species. Raymond and the garden owner were over the moon. Instead of calling everything flowers, they now had names for all their plants.

At the rear of the garden we were introduced to some children in traditional dress. We were told they were in training and learning a local ‘Spirit Dance’. 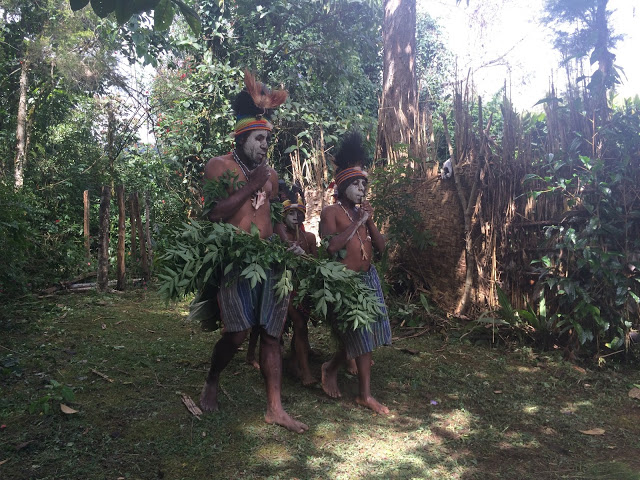 We learned that the spirit dance is performed in terms of tribal hardship, with the whole tribe heading high up in the mountains to perform the dance to call upon their ancestors for help.

This is a tradition that has been passed down for generations, and everyone believes the spirit dance helps to carve a positive path forward. Raymond even told us stories of the sky turning a dark grey when the dance in performed… 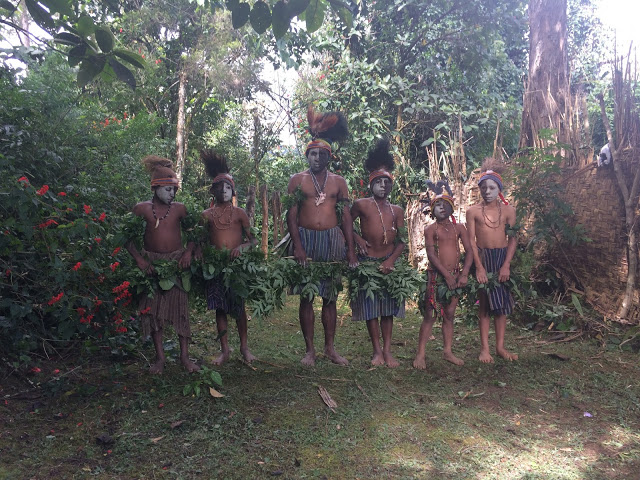 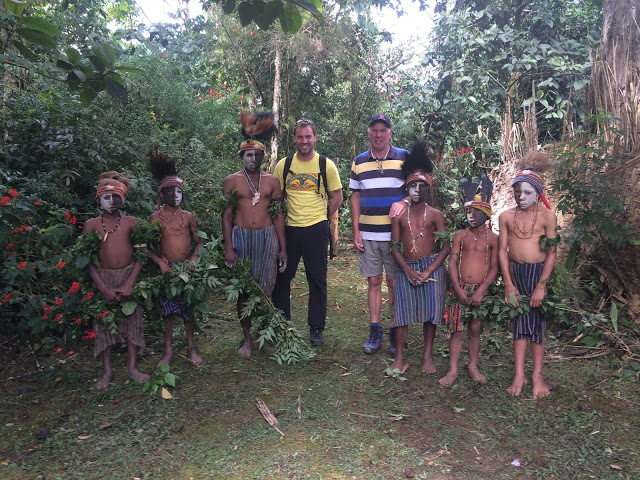 LEARNING ABOUT THE MUDMEN

We hopped back in our bus, said goodbye to our flower-loving friends, and headed to our second village, known as Pogla.

Here, we were treated to a reenactment of the story of the mudmen.

According to legend, Pogla villagers were invaded by the Kuli tribe and forced off their land, leaving many of the women behind. 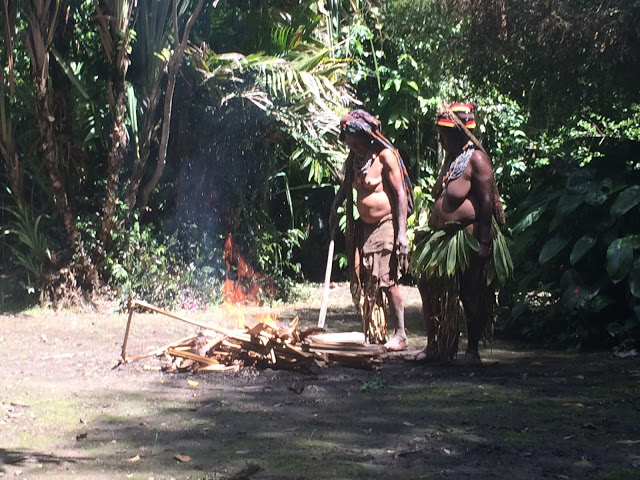 Overpowered, they came up with a creative idea. They covered themselves in mud and made heavy clay masks with demonic features, all designed to trick the Kuli tribe into thinking these white monsters were avenging spirits returning from the heavens. 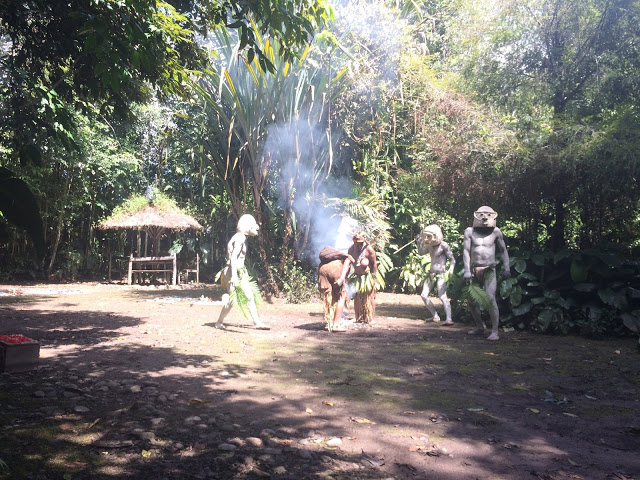 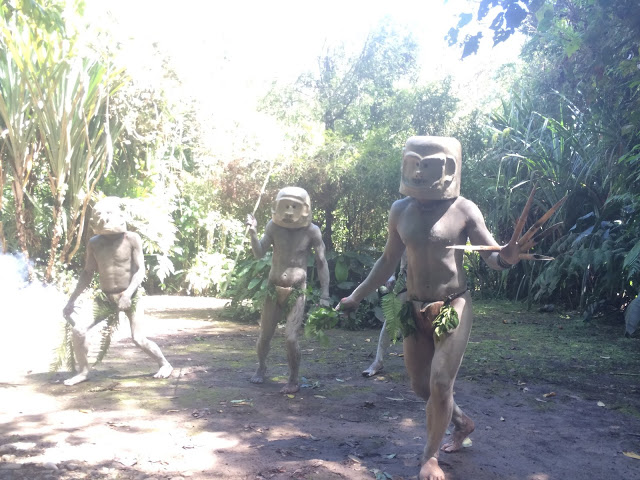 The clay-clad tribe danced madly, scaring away the Kuli tribe without a fight.

We tried on the heavy clay masks. When worn with traditional dress they look quite scary, but when worn with normal clothes they just look silly 🙂 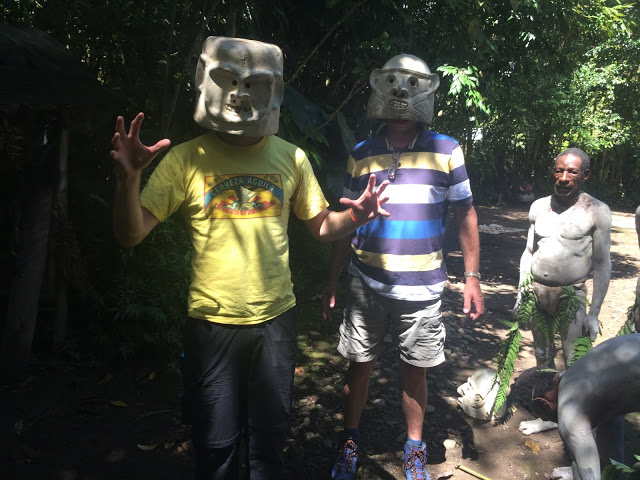 Our last village tour of the day was 2 miles down the road, past a tea plantation. Named Tokua, we were greeted at the entrance by a menacing old man with a spear.

“This is the usual greeting you would receive if you walk into another village“, explained Raymond. “They want to know pretty quickly if you are a friend or foe“.

Once we explained we were definitely friends, we headed into the village.

We met a witch doctor who is used to try and cure illnesses and communicate with spirits through rocks. Sometimes the cures work, sometimes they don’t, explained Raymond. 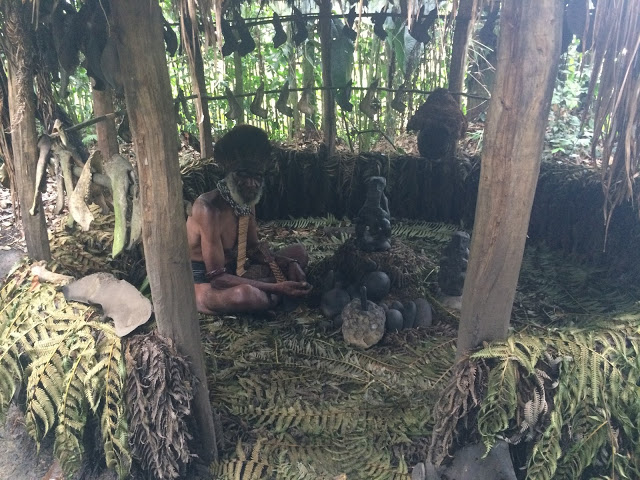 We moved towards the central part of the village, watched a local man create fire using a strip of bamboo, dried wood and a small rock, and then we learnt about the houses most people in Mount Hagen – and Papua New Guinea – live in. 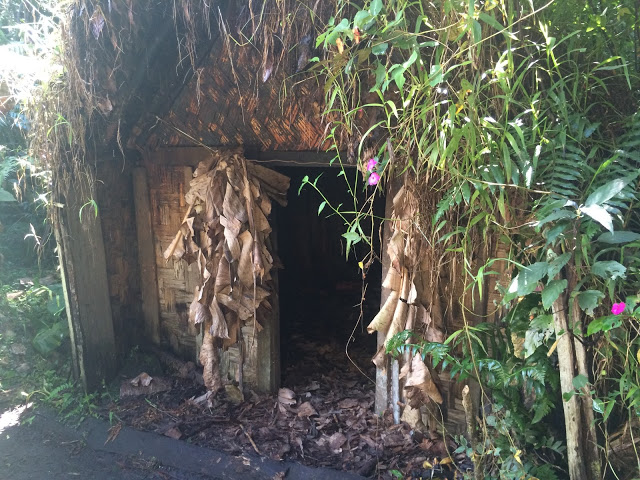 Usually made from the wood of local trees, each house would usually accommodate a small family. Dried banana plant leaves hung from a vine would form the door.

In the centre of the one room house there is a fire pit. But no chimney.

“A fire inside the house has multiple benefits“, Raymond explained. “Firstly, we are in the mountains, so the fire keeps us warm when the winds are cool“. “Secondly, the smoke and fire keeps the mosquitos and snakes away“, he said.

I won’t lie – at this point I was wearing flip flops and decided to keep a close eye on the dark ground inside the house.

“Lastly, we stay low to the ground when the fire is lit so we can breathe and talk”, Raymond continued. “The smoke rises through the roof, coating it in ash. A house that has a normal roof here may last 3 years. A house with ask soaked wood can last 10 years“.

No smoke alarms. No carbon monoxide thoughts. This is tribal living closer to caveman than current civilisation, but to the Tokua villagers, they don’t realise this, and nor do they care. This is their world, and we are seen as the weird outsiders.

On the way back to Rondon Ridge, we stopped at a local shop (I say shop, it was more like a small bus shelter with with a shelf) and got chatting to some locals.

Raymond announces that we are father and son, and the women make a weird ‘oooh’ sound and start chatting amongst themselves. My dad points at something, and I nod in acknowledgement. Shortly after, several women hit their male partners on the arm and point at us.

“What were they saying?“, I asked Raymond.

“They were saying that real men teach their son how to fish, how to hunt, how to garden…and they were saying ‘look at the white man – he brings his son to the other side of the world and teaches properly!’“, Raymond explained.

It was becoming apparent that the father son bond is extremely important in Papua New Guinea, and despite his abhorrent snoring, bringing my dad a long on the trip was a great decision 🙂