The second leg of my Papua New Guinea tour saw me visit the highlands, and learn more about Huli people and their culture.

Much like Mount Hagen, Hela Province and its capital Tari lie in the highland region of Papua New Guinea. Apart from a relatively new oil pipeline that runs from the mountain top down to Port Moresby, life here is very disconnected from the more urban areas of PNG.

Hela Province is home to the Huli tribe – the biggest tribe in Papua New Guinea, with around 400,000 people. Village communities are incredibly close and strong here, and tribal traditions are some of the oldest in Papua New Guinea.

AMBUA LODGE: OUR TARI BASE

After surviving a short tropical downpour as we stepped off the plane, my dad and I hopped aboard our waiting bus, and we headed through Tari, and up into the mountains.

We were aiming for Ambua Lodge. Nestled high up on the hillside, Ambua Lodge is one of the best, and most scenic places to stay in Tari.

Aside from comfortable rooms and a social dining area, Ambua Lodge has some incredible views of Tari and the surrounding valley. 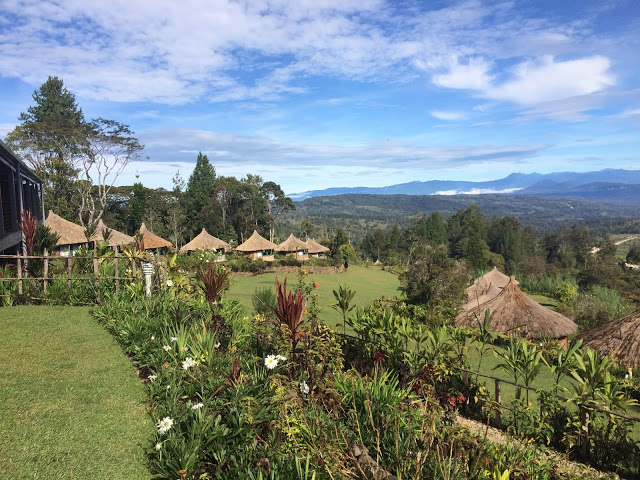 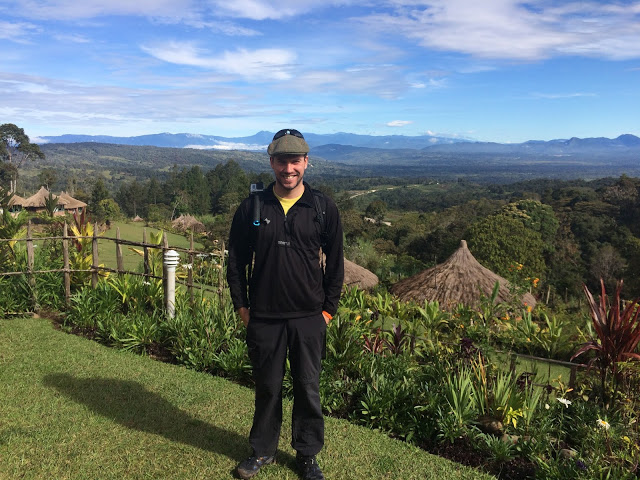 Many of the rooms are large rondavels, each with their own stunning view of the valley below. 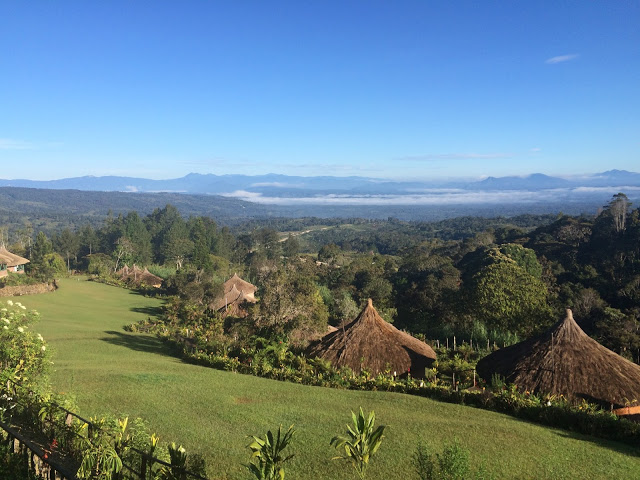 Each of the rooms at Ambua Lodge faces West, so you can watch some awesome sunsets!

The next morning we rose early and heading back down towards Tari. We were off for a guided tour round two local villages, to learn about their traditions and understand more about the Huli people.

Our first stop was the village that our bus driver – Paul – was from. Paul has two wives, and five children. When I asked him about men having multiple wives in Papua New Guinea, he made me chuckle.

“Having one wife is good. Having two wives is great. Having three wives is a big problem“

Paul said that although they don’t live on much money, sustaining food and a normal life for three wives and all their children can be a strain. So how do the men get their own back? They make the women do the gardening.

Ok, that’s not strictly true, but in this village, all the women prepare the soil, and then plant the vegetables, ready for harvesting later in the year.

In the first of the two pictures above, you may also be able to spot a four-legged willing helper. Yep, a little pig. Pigs are brilliant for gardening purposes. They will rough up the soil, eat any remnant roots, and leave the area in perfect condition for planting.

After a quick aramay (the local dialect for thank you), we were then given a more masculine lesson in using a bow and arrow.

Men in Papua New Guinea hunt using knives, spears and bow and arrows. There are very few guns, so they have to make the most of the weapons they can make using local materials.

Despite a rocky start, the local men hit a stick in the ground several times, at a distance of 20m. Pretty impressive! 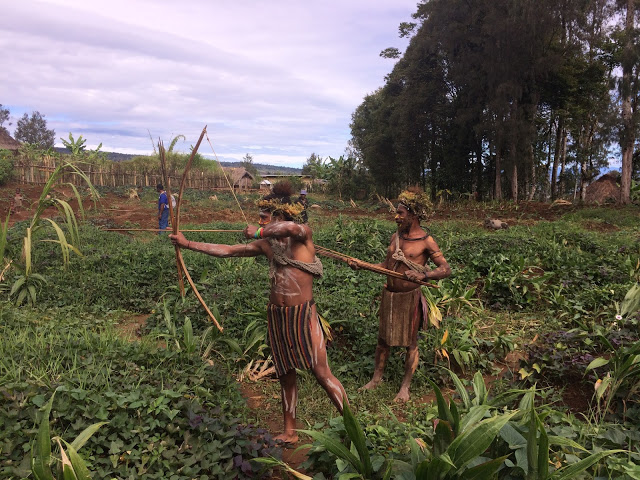 In Huli tradition, men and women live and sleep in separate houses. Boys will usually stay with their mother until around 12 years of age, before joining the other men and sleeping in their houses.

We watched the bags being made by some of the village women, and they showed us how to carry a child in the bag. The poor little guy wasn’t amused 🙂 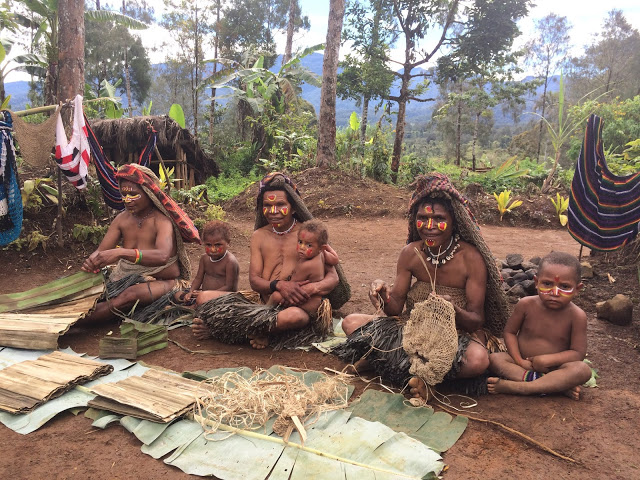 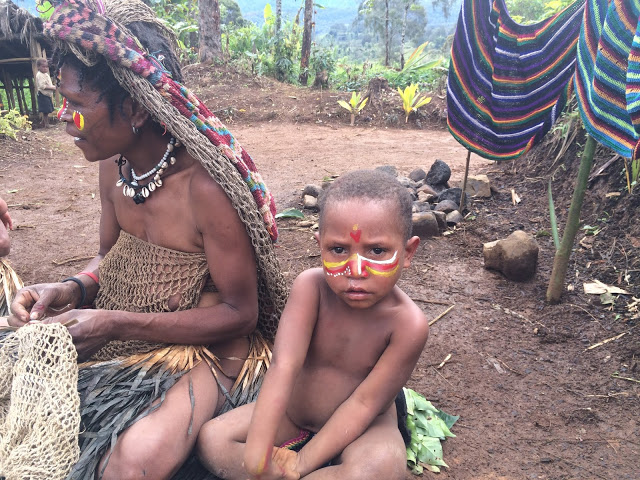 We hopped back on the bus and headed to another small village, closer to Tari. Here we would learn about the who the Huli tribe are, and their famous connection to wigs.

The Huli tribe are the most colourful tribe in the whole of Papua New Guinea. Famed for wearing bright colours, their headdresses are made using multi-coloured feathers from the many Birds Of Paradise that are found in the nearby trees and forests.

We met one man, who had his face painted a bright yellow colour, with red, fox coloured feathers creating a striking appearance on the top of his headdress. These bright, ginger-red feathers are taken from the Raggiana Bird of Paradise, the national bird and symbol of Papua New Guinea. 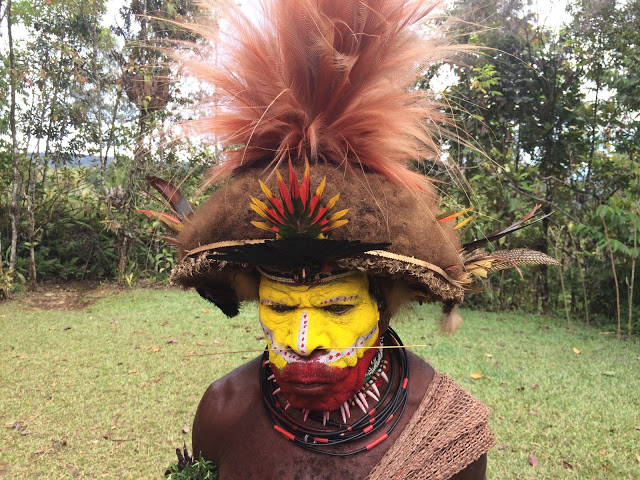 “No, not really. Men paint their face in the Huli tribe to signify the change from a boy to a man. Once a boy goes through adolescence, he becomes a man and can paint his face with any design“, the tribesman told us.

You may have also noticed the extraordinary wig in the picture above. Unique to the Huli wigmen, these wigs are carefully grown and crafted by men in the tribe, with many sacrifices a long the way. Our next clan visit would explain exactly how.

We hopped off the bus, headed down a small track, and sat on a log as more Huli wigmen made their way down the track to greet us. Our guide, Steven, explained that this was a wig school specifically designed for outsiders like my dad and me and I. “Wig schools are sacred“, he explained. “Only the students and the wig school teacher are allowed into the actual schools“. And so our learning about the wigs commenced.

Both teaching and studying wig growth are not jobs that are taken lightly. Much of the power of the teacher is not only to keep the students in line, but also to cast spells to help the wigs grow to their full capacity.

At the age of 14, virgin boys go to wig school and don’t return home until they graduate. One wig takes 18-months to grow, and the students can grow several wigs back to back. One ‘boy’ we met had grown ten wigs in a row. That’s 180 months…over ten years.

As mentioned earlier, men and women live separately in the Huli tribe, as the men believe women can be a source of danger. As such, this is a boys only school.

To enter the school, the students families usually pay the wig teacher one pig. If they want to continue in the school, another pig or money is needed to continue their wig education.

The wig making process is an extremely important process for the men of the Huli tribe. Each boy must construct their own wig, and it is part of the culture to personalise their appearance. “Freedom of expression is an essential part of Huli culture, so we encourage individuality in the wigs and face paint.“, said Steven, reaffirming what we learnt earlier.

The boys learn the traditions of the wigs in school. They learn things such as spiritual cleansing, as well as sprinkling magic water on their wigs to keep the hair looking pristine.

It was an eye opening lesson, but the Huli tribe take the schooling process very seriously. They are one of the most feared tribes in all of Papua New Guinea, and want to look their best at all times.

The men of the Huli tribe express their traditions through the growth and care of their wigs. We learned that they can grow everyday wigs, as well as wigs for ceremonial purposes, as shown by the gentlemen below. 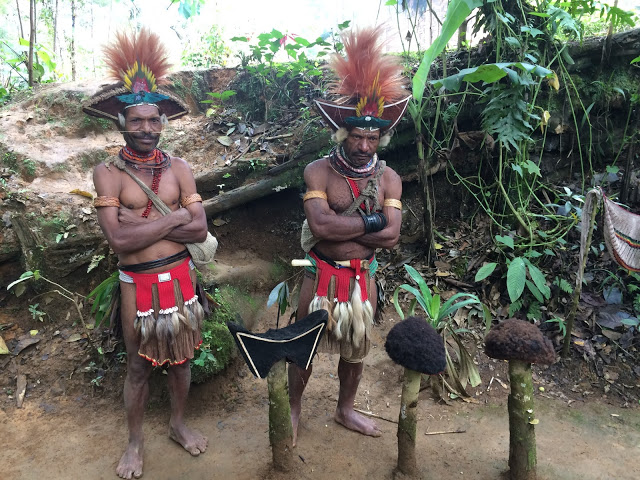 Much like our experiences in Mount Hagen, it was fascinating to learn about the traditions and rituals of a society that is still devoid of internet access and modern civilisation as we know it. Times have changed, and there are less wig students now than their used to be, but this is a tradition that is still very strong.

The next morning, we headed to Tari airport for the last leg of our trip to Tufi. I thought one of the wig teachers had cast a spell over the airport when I was introduced to the ‘departures lounge’… 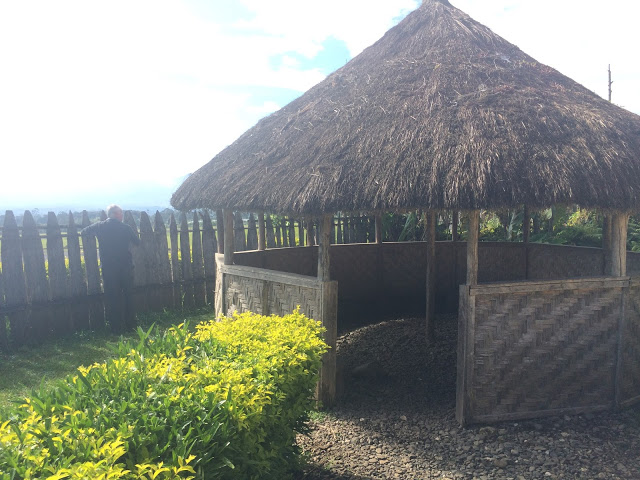 My dad peeked over the fence at the runway and I sat in the little departures hut. “Where else in the world could you have an experience like today?“, I thought.

And that’s what makes Papua New Guinea so unique.