The South Pacific Sea saw some epic battles between Japan and America during World War II (WW2). I’ve always been interested in World War II history, but being based in the UK always meant that I seemed to learn more about the war that took place on our shores, rather than the battles that happened further afield.

Papua New Guinea was a heavy battleground during World War II, with some vicious fighting taking place over land, sea and air. As a result, there are relics on land, wrecks in the sea, and plenty of untouched war history to explore. 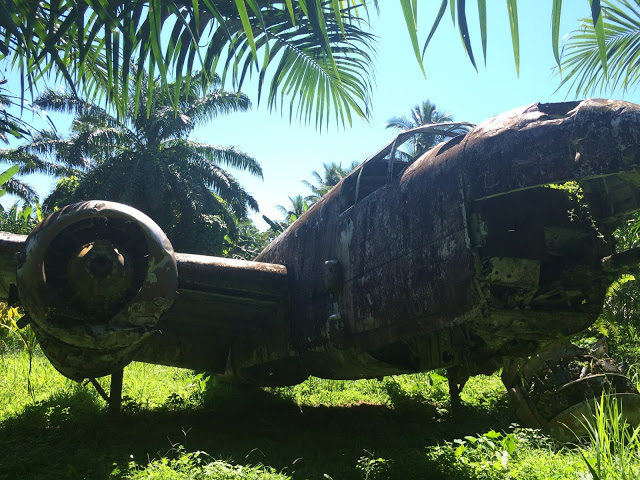 When we landed into Walindi Plantation Resort, we found out that a World War II aircraft lay relatively untouched in the jungle, a mere 35 minute drive away. Driving North West from Walindi, we headed to the old Talasea airstrip to get a closer look at the planes.

Fast forward to early 1944, and thanks to Allied forces taking key locations such as Buna in Papua New Guinea, and inflicting heavy loses in the battle for the Soloman Islands, the initial threat posed by the nippy Japanese Zero fighters and wider forces had effectively been nullified and restricted to Rabaul.

But…some Japanese Army were still hiding around the Kimbe Bay area. In September 1944, a string of supply barges set off under the cover of darkness to try and get food, medicine and fuel to the small garrison of Japanese soldiers that remained. Hopping from one coastal hideout to another, the tubs eventually reached a sheltered cove in Wide Bay, on the South Coast of East New Britain.

At the same time, occasional fly overs by Allied aircrew based around Bougainville ensured that any remaining Japanese threats were taken out. On 3rd September, 1944, an American B-25H bomber took off, with the orders to fly low and fast over the South coast of New Britain and take out any ships that may be gambling on the rain to travel from island to island.

Spotted out in the open, the B-25H unleashed heavy fire on the tug and barges, and each enemy target was blown apart and destroyed.

Whilst the fly over was a success, the B-25H had a problem. One of the radials failed, and the other engine began to splutter. Closer than Bougainville, the captain made a decision to fly to Talasea, which had an emergency airstrip.

The aircraft landed, blew out it’s nose gear, and eventually skidded to a stop, with no injuries to those on board.

Less than one week after the B-25H landed, the Lockheed Ventura NZ4522 was sent on a mission to bomb an airstrip near Rabaul. Taking off from Bougainville Island, the Lockheed commenced a steep dive and dropped bombs on the target. Although all six bombs should have dropped, two did not, so a second attempt was needed.

After the remaining two bombs were released, the starboard engine cut out. Flying on one engine, the Lockheed Ventura would never make it back to Bougainville Island, so the captain decided to head for Talasea.

With fuel running low, the Lockheed landed on the airstrip, which was 600 yards long and 45 yards wide. Again, there were no injuries.

We turned off the bumpy road, up a steep dirt track that climbed high into the jungle. 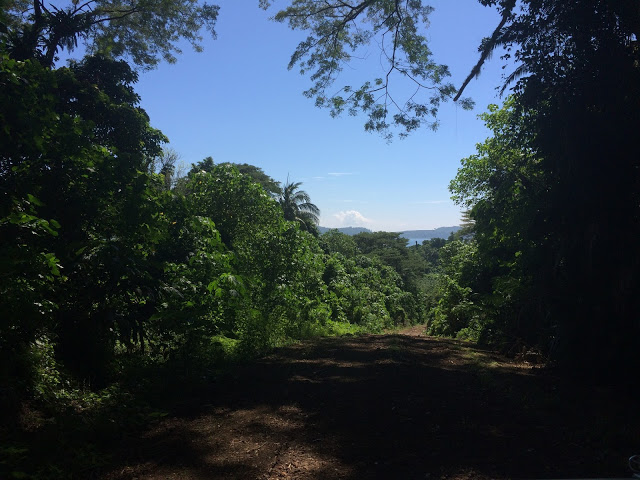 After a 10 minute drive up the track, our tour guide announced that we had arrived.

Sure enough, through the jungle reeds and vines, we spotted a plane. The former Talasea airstrip is now unrecognisable, with trees, grasses and vines now engulfing the land in all directions.

Making our way through an overgrown thin track, we reached the B-25H bomber, still resting on its undercarriage. 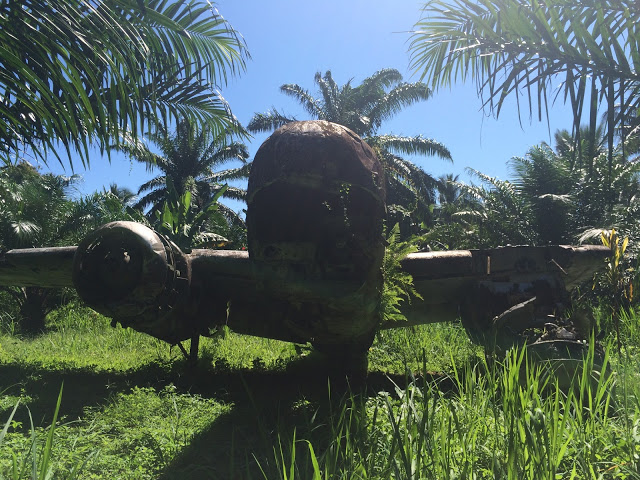 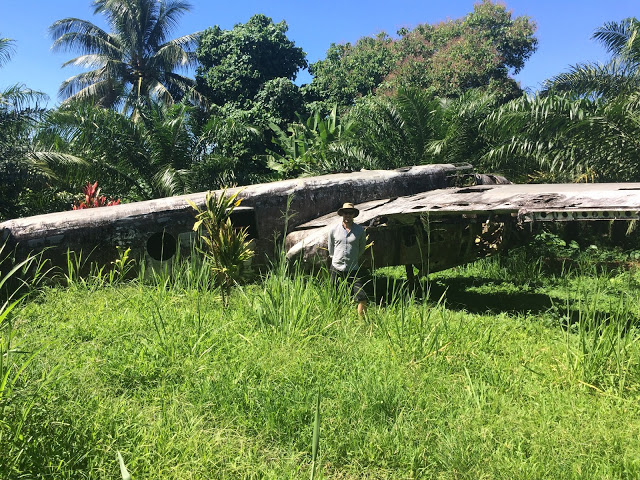 Although it was incredibly hot due to the scorching sun, it was in fantastic condition. One engine housing and part of its left wing had fallen off, but otherwise it looked fantastic. My dad was in his element.

We wandered around the plane for a good 10 minutes, exploring all of its nooks and crannies.

“The other plane is over there, 40 metres away“, said our guide. Another plane?! We thought we were only seeing one plane.

We walked back through the undergrowth, across the dirt track, and sure enough, through the trees, was another plane. It was the Lockheed Ventura. 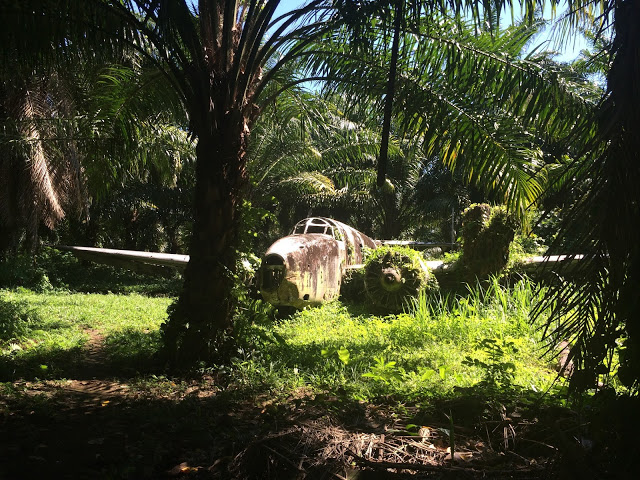 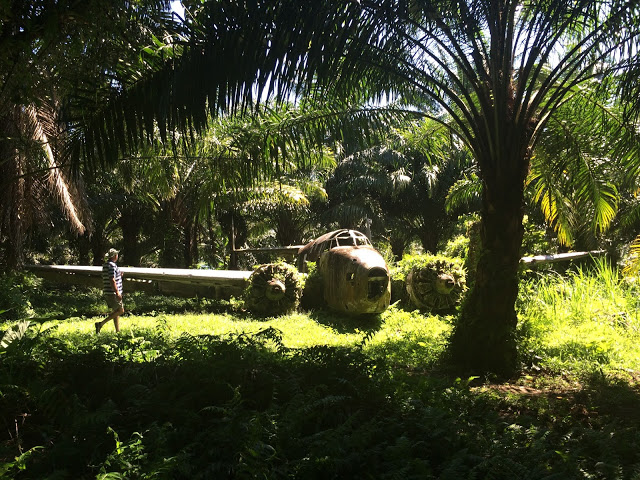 In arguably better condition than the B-25H, you can still see the Allied star on the side of the Lockheed. Vines and grasses have grown up through the undercarriage, but you can still walk inside, and look at where the pilots and gunners would have sat.

For anyone visiting New Britain – and if you don’t get a chance wreck dive in Kimbe Bay – I would thoroughly recommend visiting these World War II planes. There are the best relics I’ve ever seen, and are incredibly rare, being in their final resting position since the end of the second World War.

Land tours to the planes are available from Walindi Plantation Resort. Information on the planes can be found in the library.

My visit to Kimbe Bay was made possible through my Blogger Ambassador trip with Papua New Guinea Tourism UK.