Xi’an is one of my favourite cities in China. After a 17 hour overnight sleeper train from Yichang and using a hole in the floor for the loo, a decent hotel was a welcome relief.

Xi’an was once China’s capital city, with a history that spans over 3000 years. I spent three days exploring the Muslim Quarter and its Great Mosque, as well as the local street food stalls and the awesome Ming Dynasty City Wall (which you can cycle on to give you great views of the city!).

But there was one thing on my mind in Xi’an: the famous Terracotta Warriors. These life-size, 2000-year-old statues were formerly housed in underground vaults until discovered by a farmer in 1974, who accidentally hit one over the head with spade.

The vast terracotta army was created by Emperor Qin, the first unifier of China. Qin played a significant part in China’s history. During his rule, he standardised coins, weights, and measures, interlinked the states with canals and roads, and is credited for building the first version of the Great Wall.

To signify the importance of his reign, Qin ordered the construction of a subterranean city within a gigantic mound, with surrounding artefacts and soldiers.

The terracotta warrior site is one of those surrounding areas, and split into four ‘pits’. And it is pretty big. When I arrived at the site, I walked up the steps of Pit number one, and stared in wonder at what lay before me. Hundreds of terracotta soldiers, horses and mud walls, in a pit that must have been over 150m long. 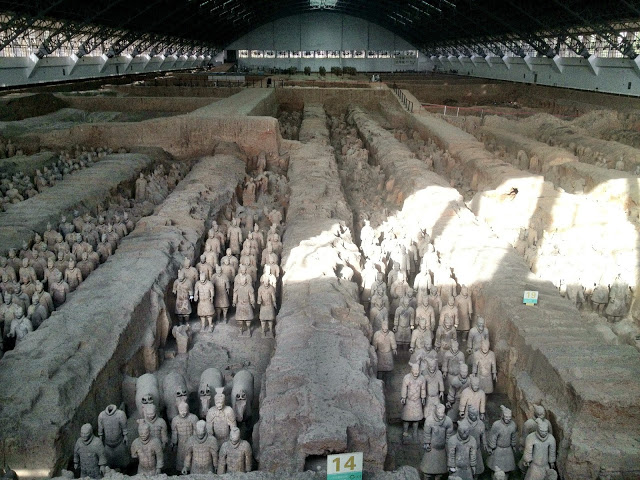 What makes them even more incredible, is that every single soldier has a unique face. Each figure was meant to be an exact replica of each soldier that was loyal to Emperor Qin during his reign. It’s no wonder it took over 38 years, using over 700,000 men to build and create them all. 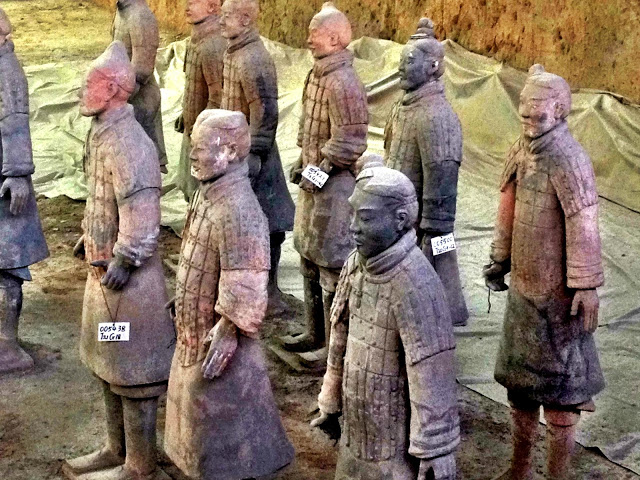 Whilst many of the terracotta army look a muddy grey in colour, some have been found to have striking colours on their armour, and have been preserved in the adjacent museum.

The first excavation of the terracotta warriors occurred between 1978 and 1984, when over 1,500 artefacts were unearthed. The second excavation was in 1985, but was stopped in the same year because archaeologists found the equipment and technology at that time could not protect the historic relics.

Excavation is a slow process, and was still going on when I visited in March 2013. 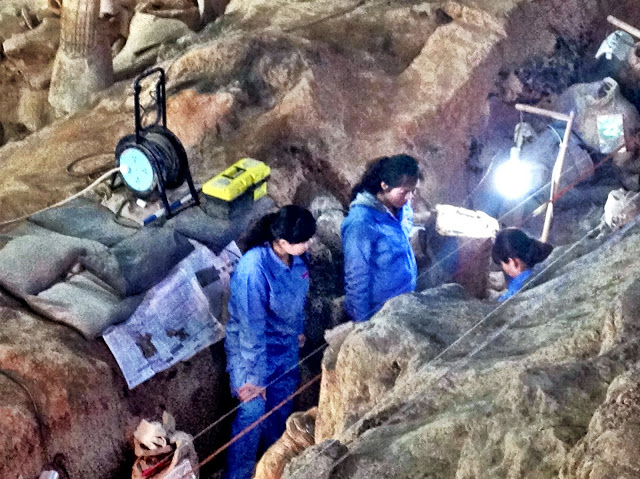 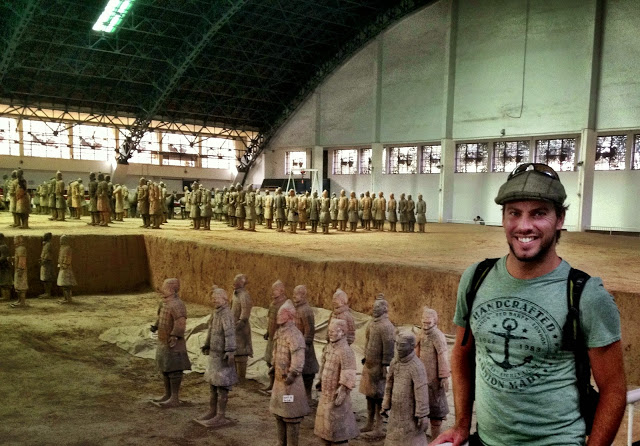 To date, there are four terracotta warrior pits that have been discovered and partially excavated.

Earlier I mentioned Emperor Qin ordered the construction of a subterranean city with surrounding artefacts and soldiers. The terracotta warriors are a tiny piece of this excavated puzzle.

The terracotta warriors are incredible, but they are part of something MUCH bigger.

To give you some perspective of the sheer size and scale of this subterranean city, I’ve created a map. 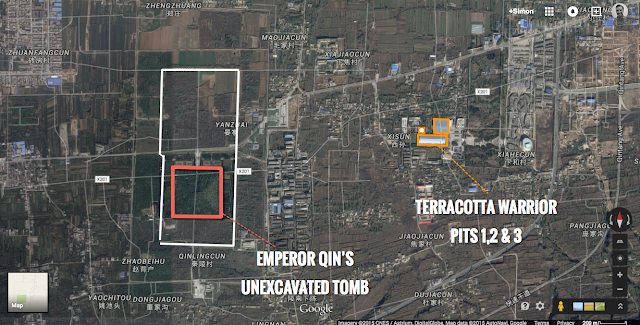 Given Pit 1 is over 150m long, the main Emperor’s tomb is probably over ten times the size, AND there is around 1000m between the main tomb and the terracotta army that was discovered in 1974.

Just imagine what could be found between the current terracotta army site and the main tomb, let alone the main tomb itself.

Our GAdventures guide continued: “Nobody has been in the Emperor’s tomb. It is the big discovery still to happen. But the people studying the tomb are worried that if they open it now, everything inside many be destroyed due to sunlight and oxygen affecting the state of the artefacts.”

So not only are the terracotta warriors a tiny piece of Emperor Qin’s mausoleum, but they are, bizarrely, relatively insignificant when it comes to the main tomb itself.

I wanted to find out more about this massive mound, so did some digging (no pun intended!).

According to a researcher with the Shaanxi Provincial Archaeology Institute, experimental pits dug around the tomb have revealed musicians, dancers, and acrobats full of life and caught in mid-performance.

Excavations of any kind are on hold for now, due to the ‘complex conditions’ within the tomb. The decision whether to explore the tomb is up to the government of China. That decision will likely be influenced by the pace of technological progress, as, like the excavations of Pit 1 in the 80’s and 90’s, technology has progressed significantly. Imagine what tools might be available in 20 or 30 years time.

The answers to a number of China’s historical mysteries may lie buried inside that tomb, but it could be many years before people will ever see inside it.

The terracotta warriors aren’t the most significant discovery in Chinese history. Seeing inside that tomb will be.