You’ve all heard of the term ‘yuccie‘, right? No? Well think of it as a more creative, entrepreneurial hipster.

A yuccie, as described perfectly by Skyscanner, is a young, urban creative. Yuccies are a new breed of young people that like a flat white, a craft beer, and have a start up spirit.

In order to capture and explore where these yuccies hang out, Skyscanner decided to explore 20 of the yucciest cities and neighbourhoods in the world, and hand over their Periscope account to 20 travel writers and bloggers for them to broadcast live from each location.

Sounds like a great project, right? Yep. And even better, Skyscanner chose me (woop!) to showcase Islington at night, and explore the bars and restaurants where yuccies hang out. 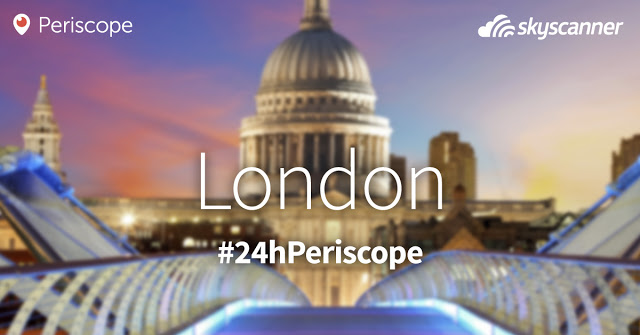 This was Skyscanner’s second #24hPeriscope project, the first being an overwhelming success back in April, as it pioneered the use of Periscope on a global scale.

This time around, Skyscanner picked 24 Yuccie cities, showcased by 24 people, all in 24 hours.

“What is Periscope?” I hear you ask? Periscope is a live video streaming app launched by Twitter earlier in March this year. Social Media Week recently wrote a post covering everything you need to know about the app, which is well worth a read.

As travel blogging and video recording goes, this was by far my biggest challenge to date. Speaking for 1 hour about Islington, showing people around and trying to be as interactive as possible was never going to be easy. Essentially I was a live tour guide, trying to be as social and informative as possible…and I loved every minute. At one point I had 234 viewers around the world 🙂

I had fun showcasing some of the bars on Upper Street, a craft beer pub, a Turkish restaurant, meringues in Ottolengi, the Kings Head Theatre Pub, as well as old of the oldest cinemas in the UK: the Screen On The Green.

Below are a couple of the broadcast recordings, so feel free to watch them back and let me know what you think!

LIVE on #Periscope: Exploring one of the oldest cinemas in London – come join me! #24hPeriscope https://t.co/LWjntUVTTL

If you want to check out the full schedule and see who was involved, check out this link.

Do you think Islington is the only Yuccie spot in London? Let me know if there are other places to explore, and I’ll put them on my Periscope list.

Lastly, many thanks to those that tuned in – I hope you enjoyed the tour!

Basque Country: Pintxos, Wine And A Trip To Spain
Scroll to top