I’m going to throw it out there right away – there are many similarities between Reykjavik, Iceland, and Queenstown, New Zealand.

As I was coming into land over the snow covered lava fields of Iceland, there was a certain excitement and trepidation that made my feet tingle. Just like when I arrived into Queenstown.

Given Queenstown is my favourite town in the world, it was safe to say I enjoyed Reykjavik, and especially the Golden Circle tour. 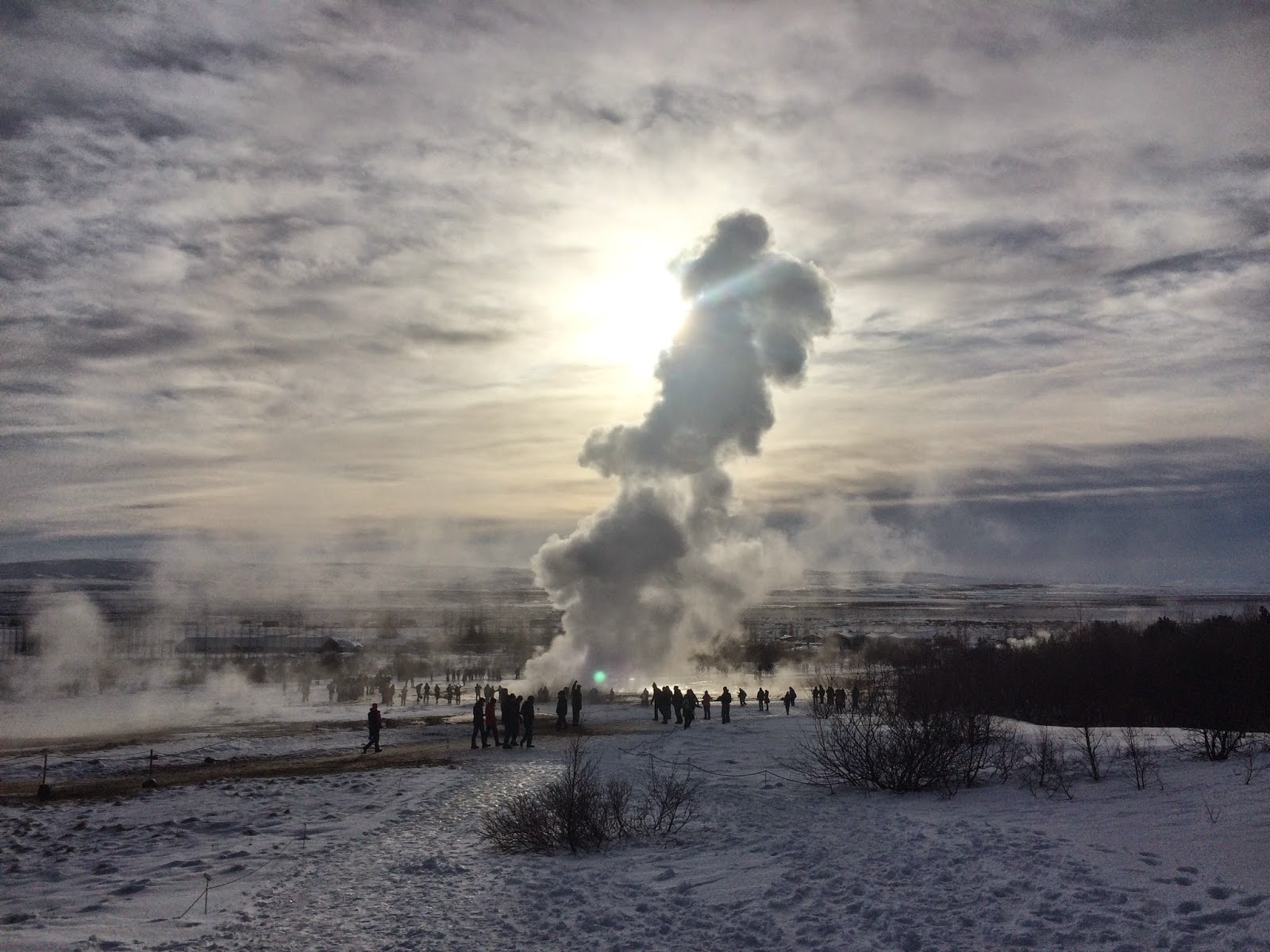 I was collected from Loft Hostel at 8:30am, and headed to the main bus station. After changing buses, I hopped on a bigger coach, and headed East, into central Iceland.

EVERYTHING IS GREAT IN ICELAND

Our tour guide was a very friendly, laid back chap. He started giving us some information and stats about Iceland, and told it in a very humorous way.

“Iceland has no military, because we have no enemies. Although a couple of polar bears once swam over from Greenland. They weren’t enemies per se, but for the first time, humans in Iceland weren’t top of the food chain“

How awesome is that?! “There is very little crime here, women have equal rights, our healthcare is free, and our education is free“.

Aside from the NHS, that made the UK look pretty ordinary.

He continued. “100% of our energy is renewable, and we have lots of fresh water, meaning we can create fantastic craft beer“. Now he was talking my language, but did Iceland have any negative points?!

“We don’t have a great football team and it is incredibly cold in the winter“. If those were the only negative points Iceland has to offer, then Iceland can proudly puff out its chest and other countries need to look in the mirror.

Oh, and there is the odd earthquake, of course.

GROWING TOMATOES ALL YEAR ROUND

After an hours drive inland, our first stop was at the impressive Fridheimar greenhouse cultivation centre. Just as our tour guide said, 100% of Iceland’s energy is renewable, so they can use it for whatever purpose they see fit. Here, they grow delicious tomatoes – with the aid of the geothermal heat – all year round. 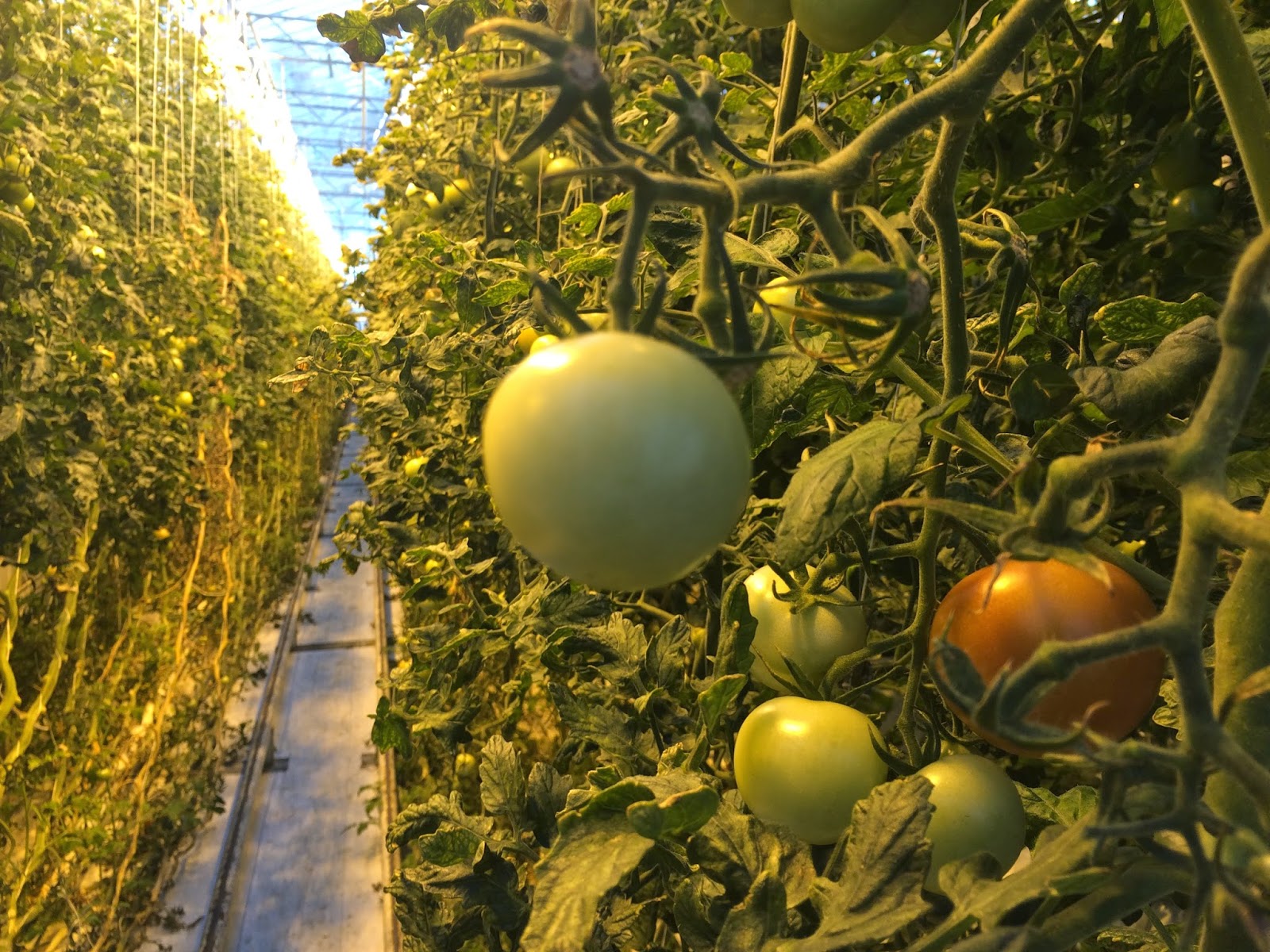 The cultivation centre uses the geo-thermal power to create both heat and light, both of which Iceland needs in abundance in the winter season.

In fact, the amount of power that is needed to keep the greenhouse lit over the course of a year is enough to power a town of 3000 people. That allows the Fridheimar greenhouse to grow 300 tonnes of tomatoes per year, which makes up around 20% of Iceland’s total tomato produce.

Given the level of tomato production, they can always spare a few to make tomato soup and Bloody Mary’s for any visitors, and I can confirm both are delicious!

10 minutes away from the Fridheimar greenhouse is the Geysir geothermal area. Unfortunately the main Geysir is inactive at the moment, but we were treated to several explosions from the Strokkur geyser, which shoots a column of water up to 30 metres into the air every 6 – 8 minutes. 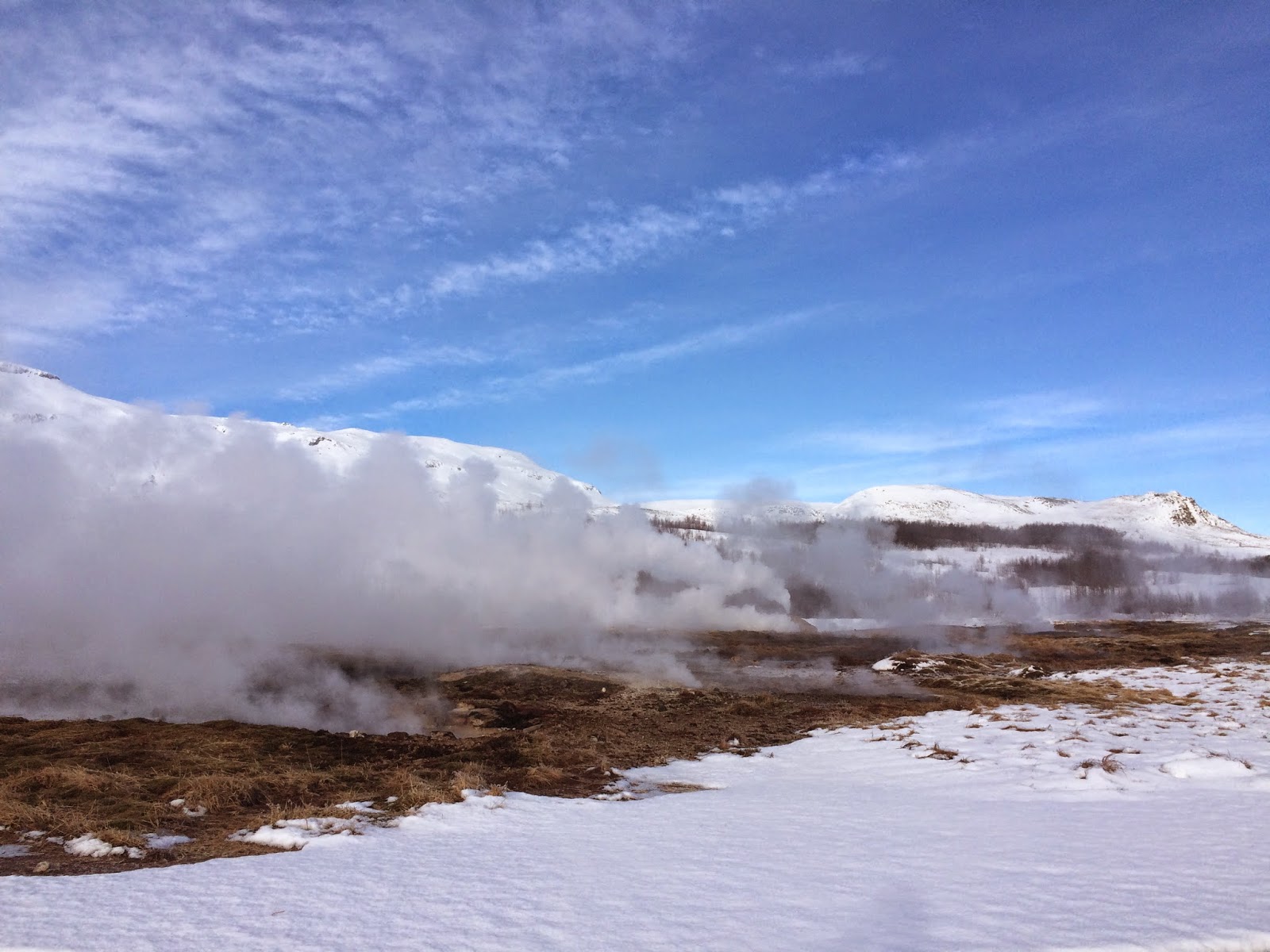 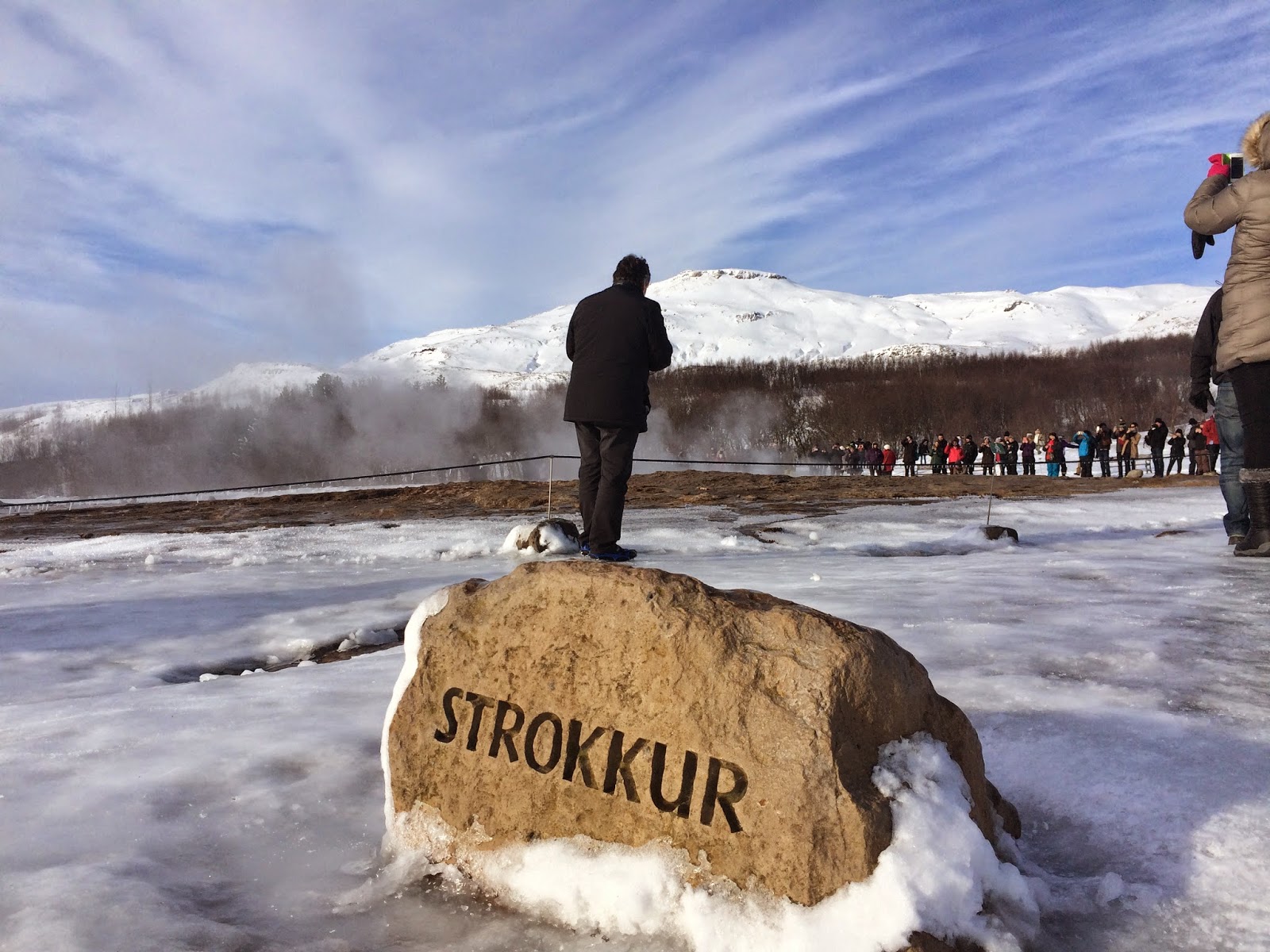 There is a very limited window of time to capture the eruption from start to finish, so you have to be very patient to get the right shot. I didn’t manage it with my camera, but as you can see in the video below, my trusty GoPro was on hand to capture the Strokkur geyser erupting.

There are several geysers in the area, as well as a small hill, which is available to climb for those who want to risk a little more of the icy path to get a better view of the landscape.

I hiked up the hill, turned around, and was amazed by the view. A bleak, barren landscape, covered by farmland and rocky lava fields. The sun was trying to break through the clouds, which made from some spectacular photographs 🙂 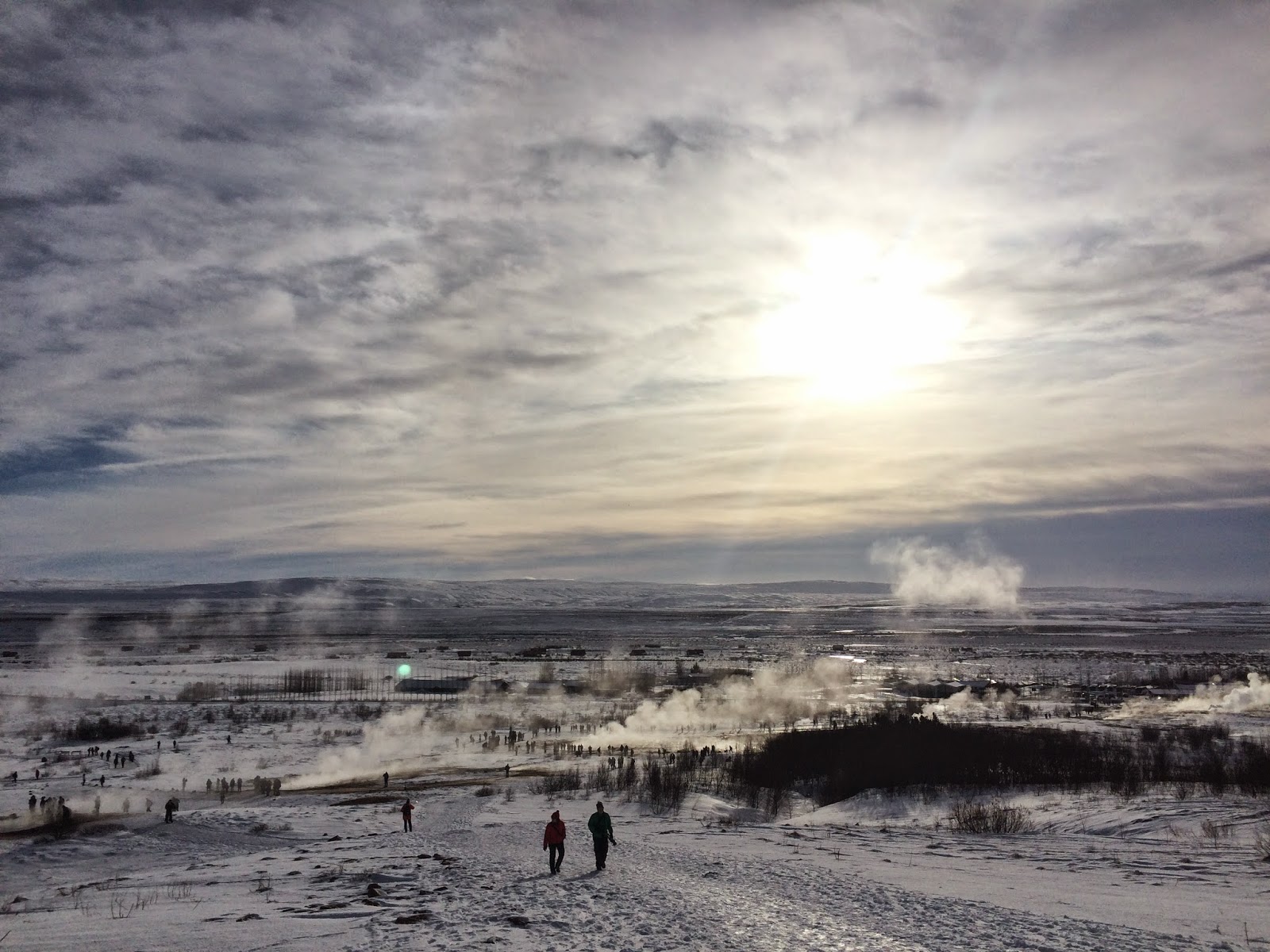 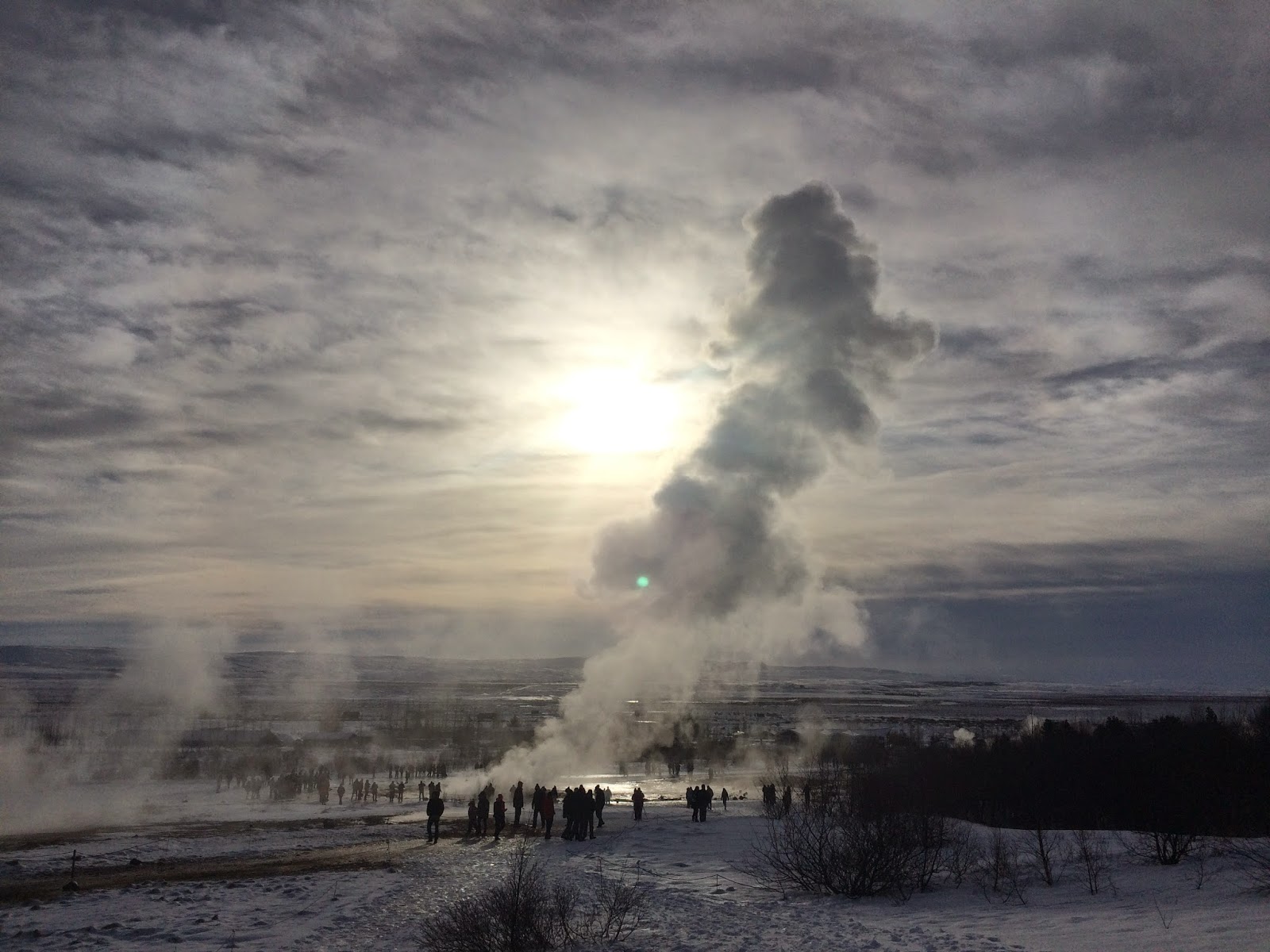 Up until a few years ago, soap was used to induce an eruption from the main geyser. It would be announced in the morning that the main geyser would erupt at 3pm, so tourists could time their arrival. Eventually it was discovered that soap affects the natural plumbing of the geyser, so this was stopped.

I made my way back down the hill, and across the precarious icy path into the warmth of the adjacent restaurant for lunch.

After a quick lunch stop, we jumped back on the bus, and drove another 20 minutes to the next feature of the Golden Circle tour – the impressive Gullfoss waterfall.

The location of the waterfall is in a shallow valley, which acts as a wind tunnel. The wind chill made it incredibly cold as I made my way down the icy wooden steps to get a view of the Hvítá river, and the 32m tumble and plunge of water into the crevice below. 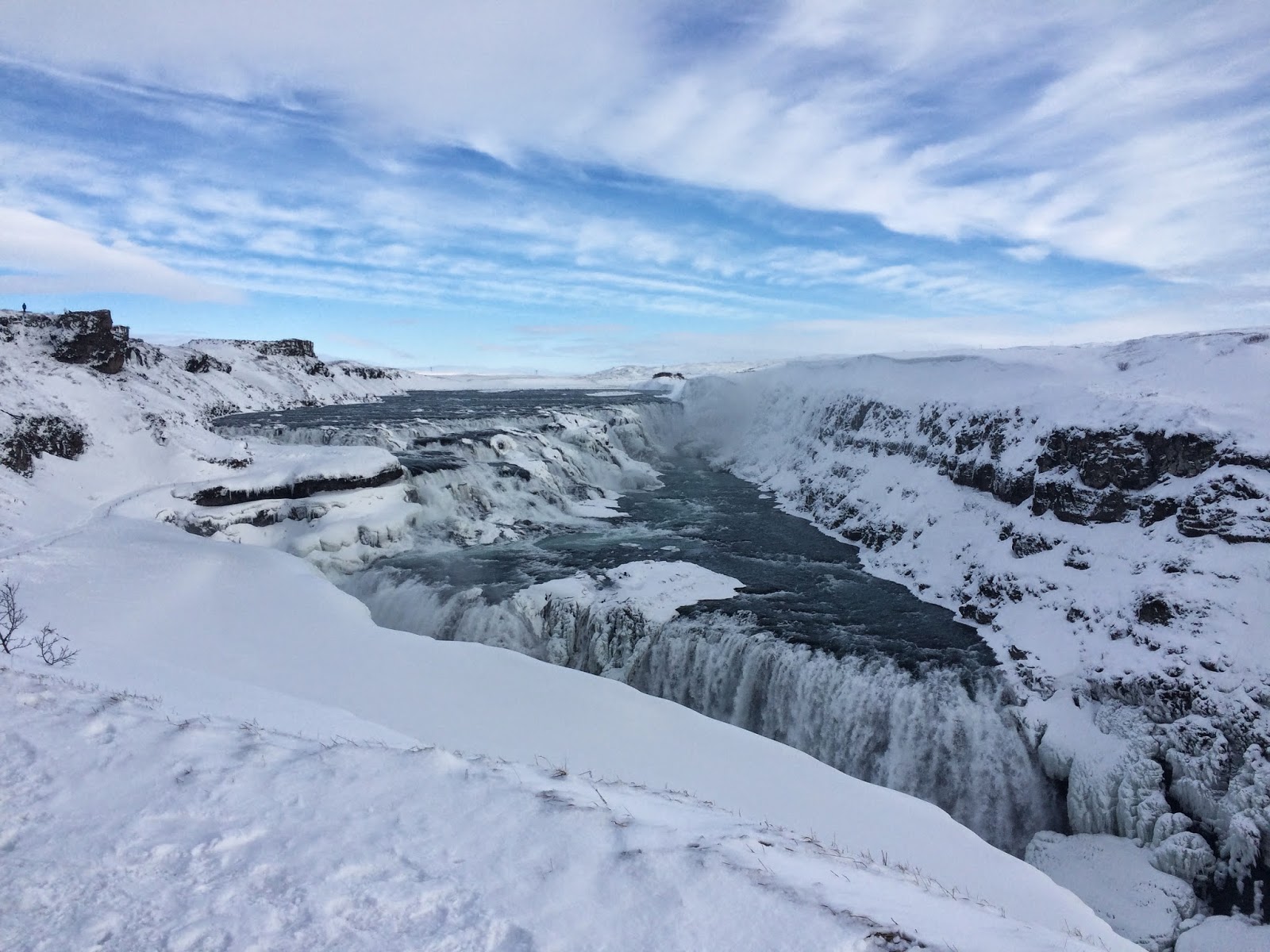 Even after 10 minutes of watching the waterfall, my hands and face were beginning to turn to ice…so I headed back up the stairs to the cafe and grabbed an Irish coffee to warm me up!

Many visitors say it is the most impressive waterfall they have ever seen. I’ve been fortunate enough to see Iguazu Falls and Victoria Falls, and for sheer power and size respectively, I’ll put the Gullfoss waterfall third on my list 🙂

Once everyone had caught a glimpse of the waterfall, it was time for a few more Iceland facts from our tour guide.

“Iceland has been above sea level for 16 million years. We shouldn’t even exist, but thanks to tectonic plates, we are very much here“. That set the tone for our final stop – the Thingvellir National Park.

The Thingvellir National Park isn’t just known for it geology. It also holds a very important place in Icelandic history. The Icelandic general assembly was established here around 930 AD, and continued to convene at the ‘Parliament Plains’ until 1798. Major events in the history of Iceland have taken place here, and as such it is held in high esteem by all Icelanders.

Today, the area is a protected national shrine. And you can see why they met here – the views are pretty incredible! 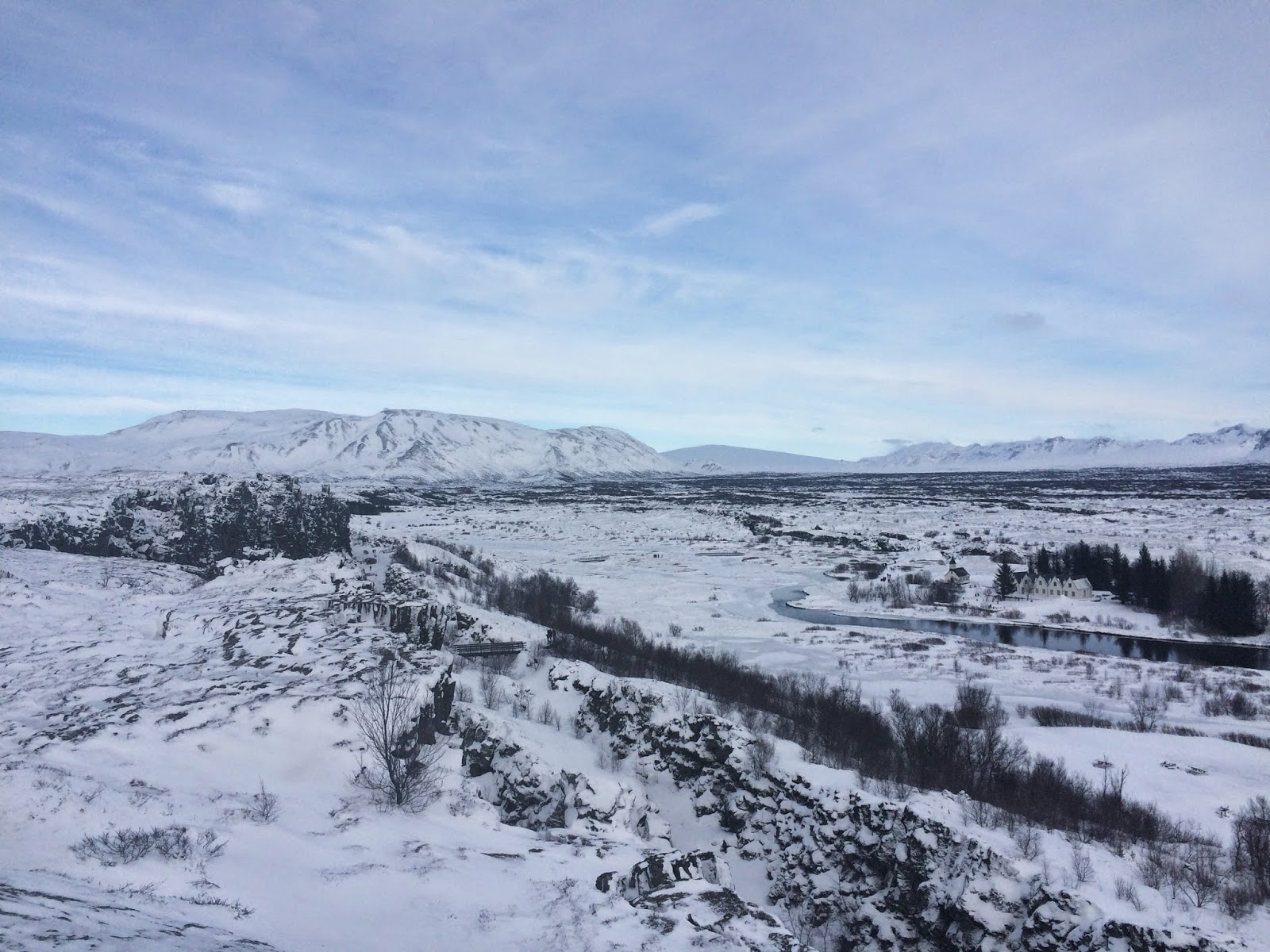 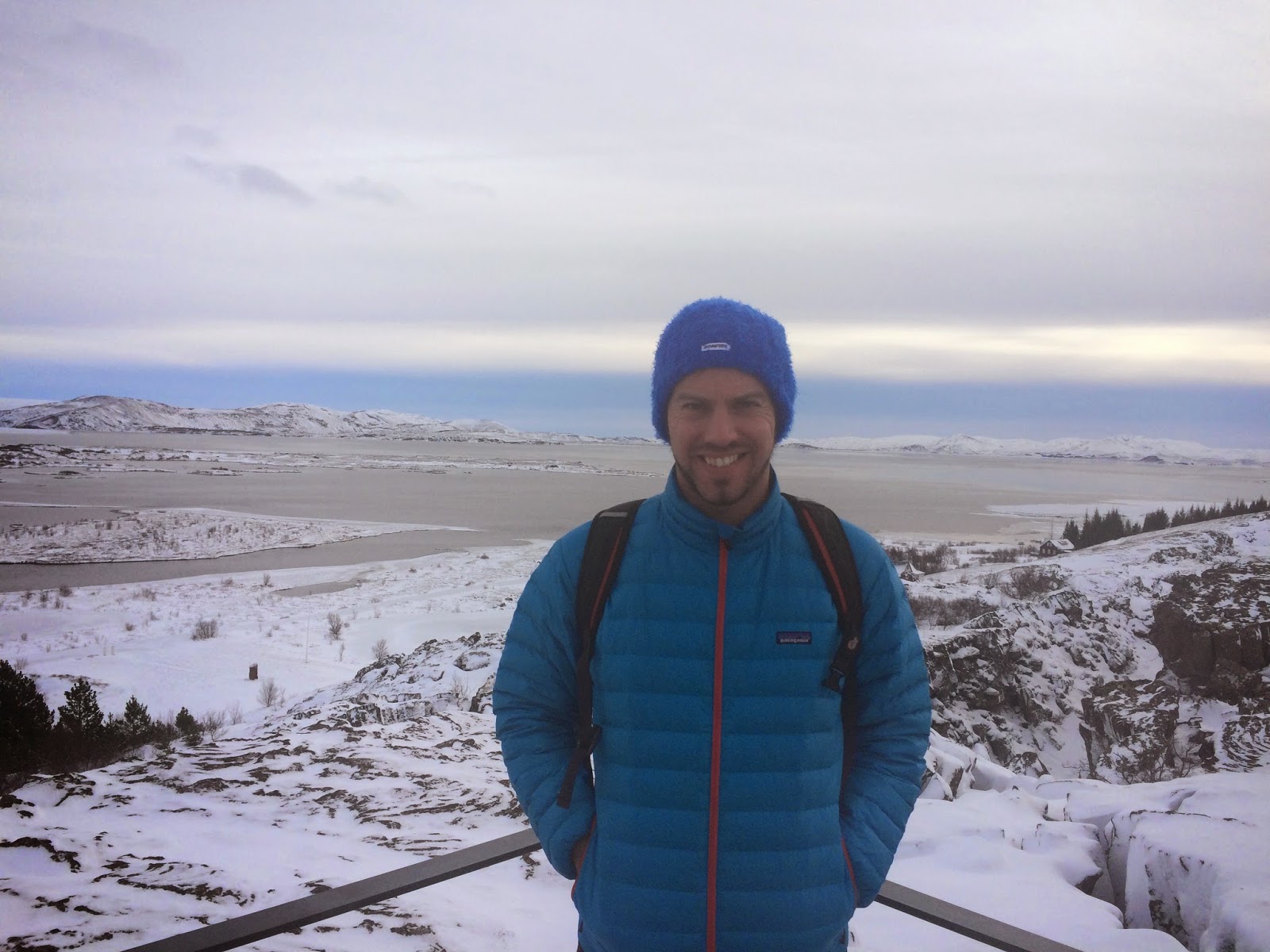 And right next to where the Parliament used to meet? The edge of the North American tectonic plate. 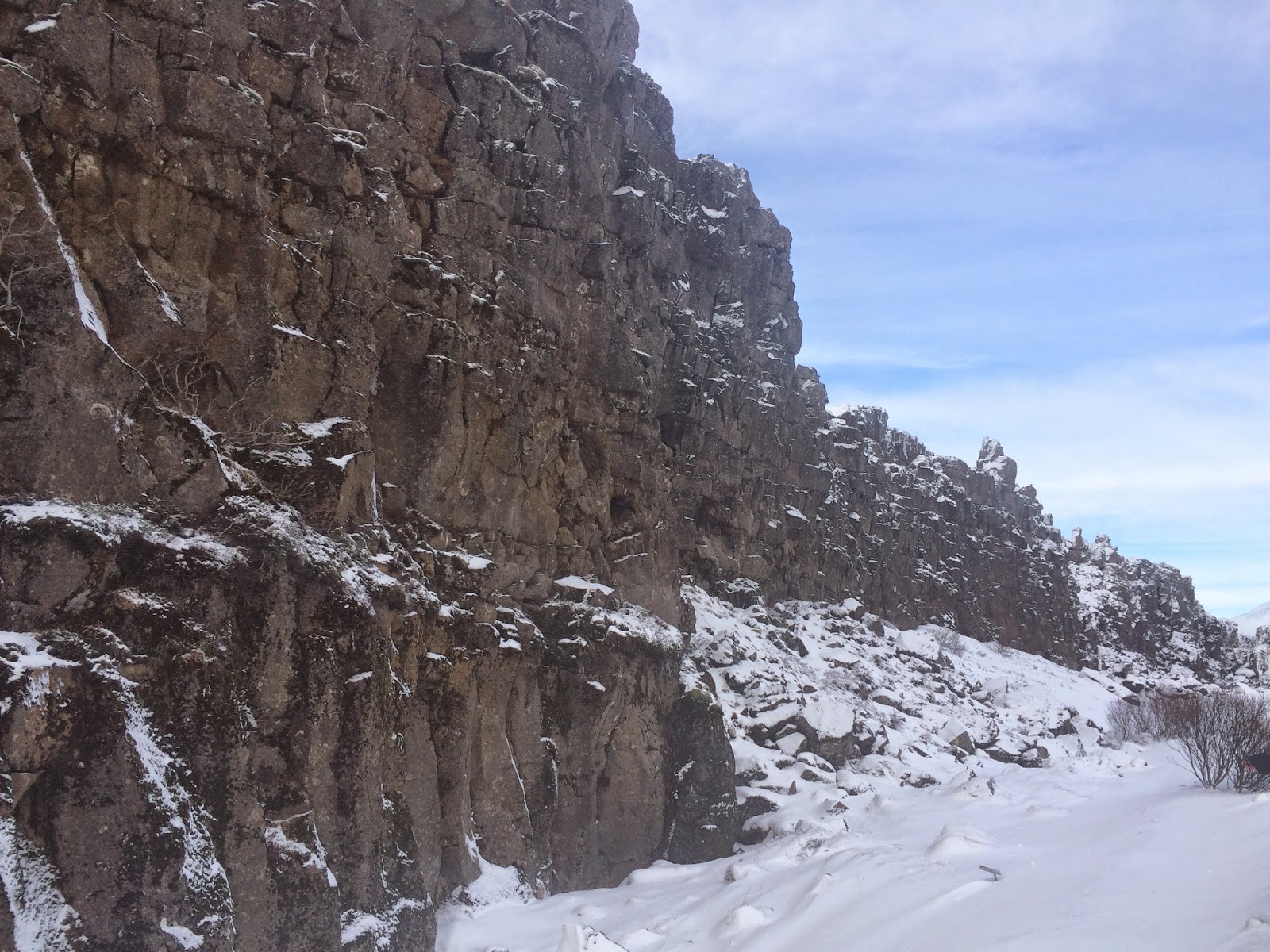 Much like learning about the Inca Trail in my geography class at A-Level, I was also amazed by tectonic plates. It seemed a far cry that I would actually see and touch one in real life.

As you’ll see in the video below, turning and looking out over the landscape, the edge of the Eurasian plate sits somewhere in the distance, and two plates are moving away from each other, at a rate of a few centimetres every year. It is this movement that causes a lot of the earthquakes in Iceland.

We walked to the top of the path and got a final few pictures of the Parliament Plains before heading back onto the coach, and heading back into Reykjavik.

Whilst I was incredibly lucky to see the Northern Lights, the Golden Circle tour was the best trip I took in Iceland. The tour takes up a full day, but I would thoroughly recommend it. Just remember to take lots of warm clothes!

WHERE TO STAY IN REYKJAVIK?

PIN IT FOR LATER 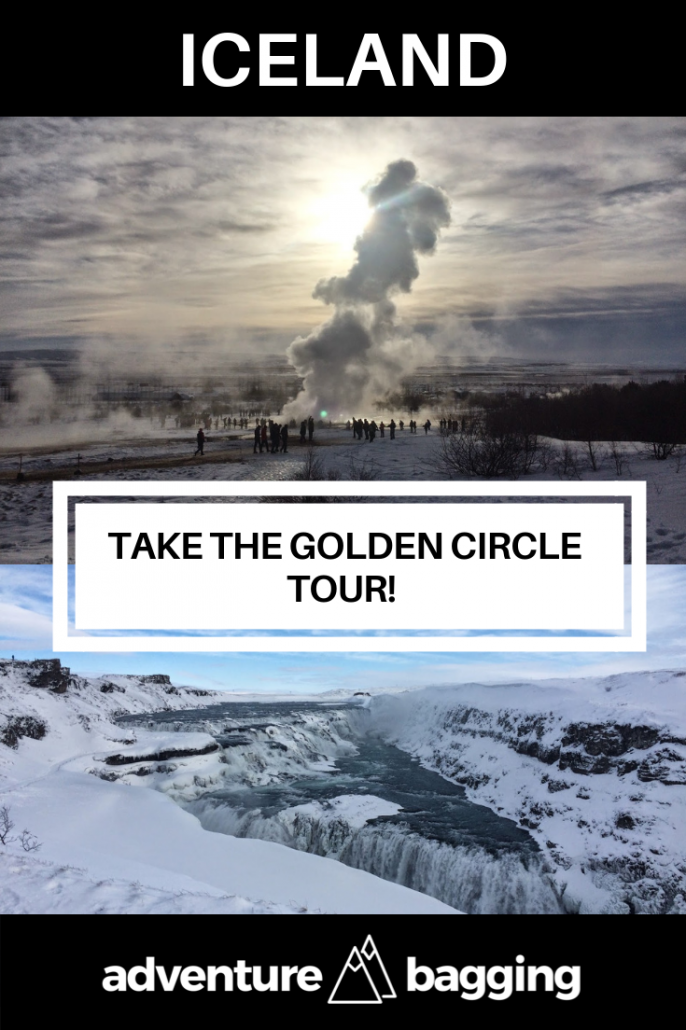 Disclaimer – some of the links included in this post are affiliate links, which are a form of advertising. Any hotels booked or products bought through these links help me pay for this blog. Just so you know 🙂