In 2011, I bought shares in a craft beer company called BrewDog, through a crowdfunding project called Equity For Punks.

Much like my first digital agency bigmouthmedia, BrewDog is a huge Scottish success story, and has been the UK’s fastest growing food and drinks company for the past seven years (2012 – 2019).

Despite me shouting from the rooftops, many people still hadn’t heard of BrewDog up until recently. Their awesome brews have been creeping onto the shelves of major supermarkets over the last few years, and they have been (not so) quietly creating a craft beer revolution. 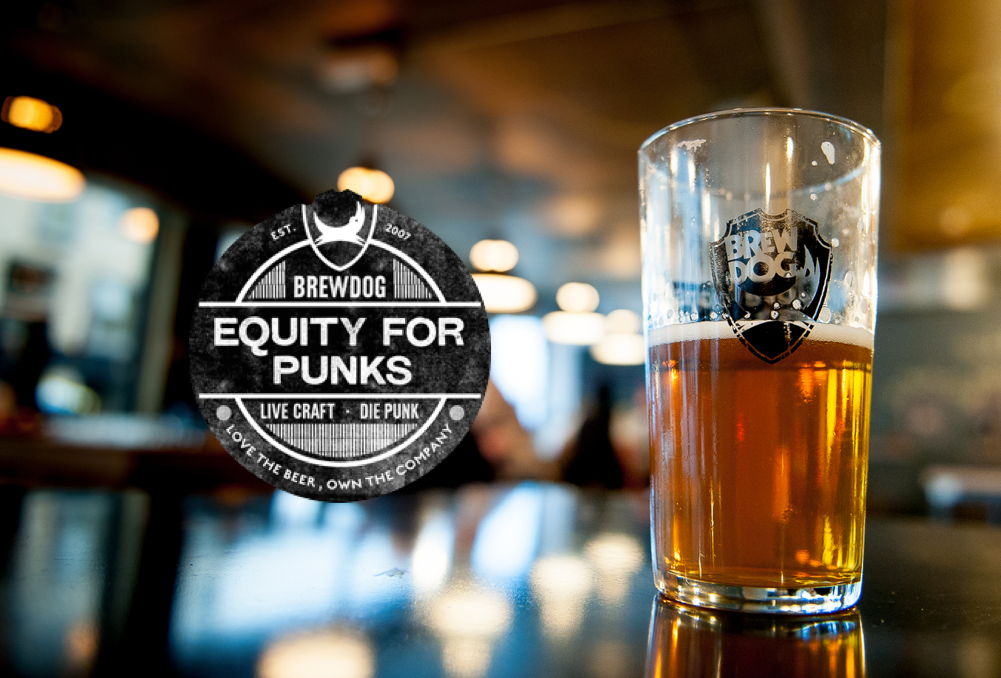 I was sat at my desk in Edinburgh in 2007, when we received an enquiry from an Aberdeen-based beverage company called BrewDog. The name got my attention. I had a peek at their site.

Back then, BrewDog had six or seven beers, including their flagship brew – the 6% Punk IPA.

Both the founders James and Martin were 24 years of age. I was 25.

I love ale and craft beer, so without knowing it, they firmly planted themselves on my radar.

It soon became clear that BrewDog didn’t do things by halves. This was a hardcore company.

In 2008, they brewed the world’s strongest beer – Tokyo – a 16%, rich, smoky stout. It came to the point that the Portman Group (an alcohol industry marketing regulatory body) banned most of their beer.

In fact they sued them.

In 2009, they brewed yet another record breaking beer. This time, Tactical Nuclear Penguin (a 32% ABV beer) became the world’s strongest beer.

In that same year they also aged a beer on the deck of a fishing boat, smashed loads of industrial beers with a golf club and grew the business by 200% (in a recession).

Every time I read about BrewDog, they seemed to be pushing boundaries, and smashing records (and shit beer).

In 2009 they launched Equity For Punks, one of the first crowdfunding initiatives to hit the UK.

Equity For Punks allowed craft beer lovers and the general public to buy shares in BrewDog. This round of investment saw over 1,300 people buy BrewDog shares. I missed out….on that occasion.

ANY PR IS GOOD PR

As well as annoying the Portman Group, BrewDog’s ‘on-the-edge’ marketing and PR continued to raise eyebrows. In 2010 they brewed another record breaking 55% beer called the End Of History, and packed the bottles into dead squirrels, making it the world’s most expensive beer ever as they ‘fused art, craft beer and taxidermy’.

Ultimately this was about getting noticed, and educating people that beer can be enjoyed, and that there are alternatives to the generic, mainstream beers available. 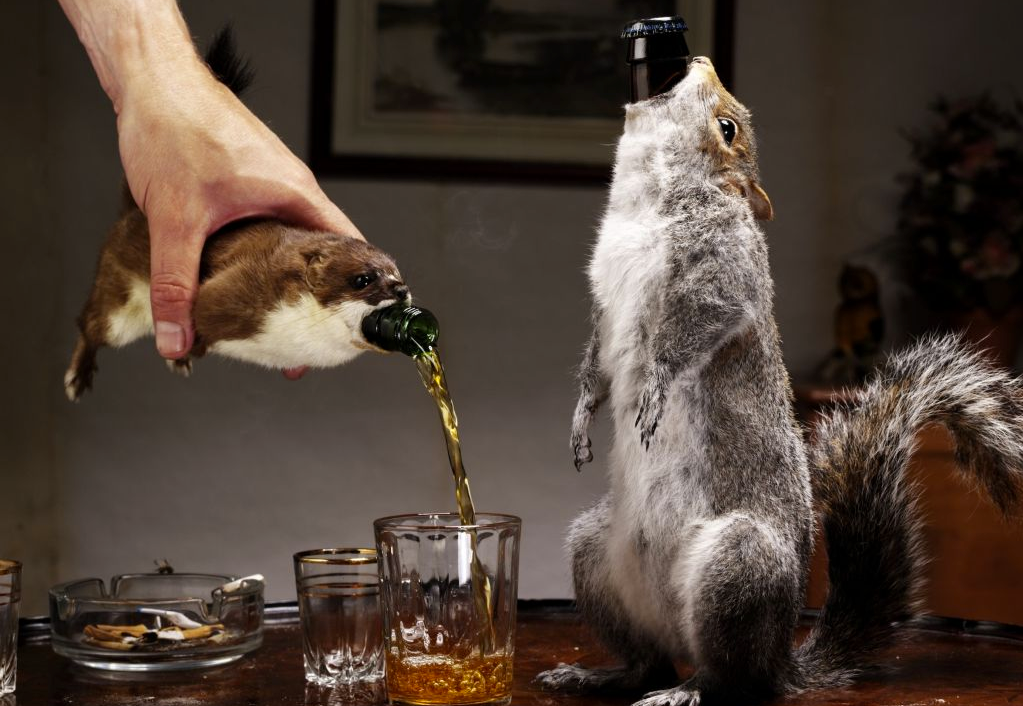 They then went and brewed a beer at the bottom of the ocean (and called it Sunk Punk), dispensed a 28% beer from a modified deers head, and drove a tank around London to launch their BrewDog Camden bar.

As I mentioned above, they don’t do things by halves (but they do drinks in schooners).

Enough was enough. I missed out in 2009, so with some cash I saved up in 2010 and 2011, I finally bought shares in BrewDog through their Equity For Punks scheme. This second crowdfunding round saw BrewDog raise £2.2 million by the end of 2011.

So not only did I own part of a craft beer company, I also got a lifetime discount in their bars, an online discount, an invite to their epic annual AGM, and updates on how the company was progressing. 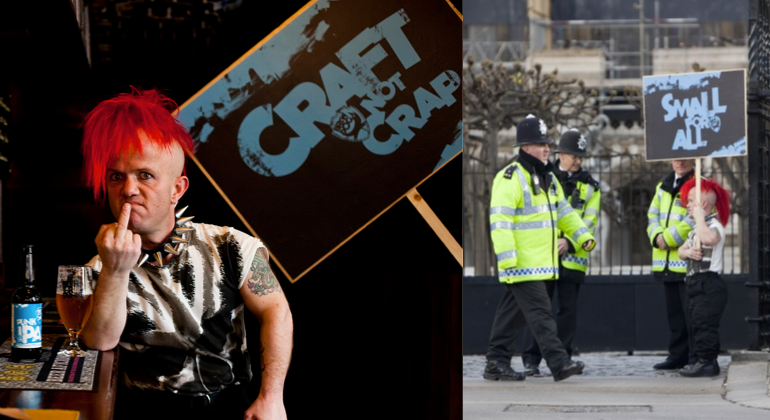 Through a government lobbying protest with a dwarf, science minister David Willets confirmed that the coalition government would tear up 300-year-old measures laws, allowing a new two-thirds of a pint, or ‘schooner’ measure to be available – which is perfectly suited to more flavoursome craft beers.

In 2012 they moved to a brand new brewery (purchased with the crowdfunding cash), and opened 6 more bars.

In 2013, BrewDog raised another £4.25 million through the third Equity For Punks crowdfunding round. In fact they raised over £1 million within the first 24 hours.

BrewDog has grown sales at an annualised rate of 167 per cent over the past five years. By early 2015 they had bars in Stockholm, Helsinki, Toyko, Sao Paulo, Gothenburg, Bologne, Barcelona and Firenze, with plenty more to come in the USA and other countries. 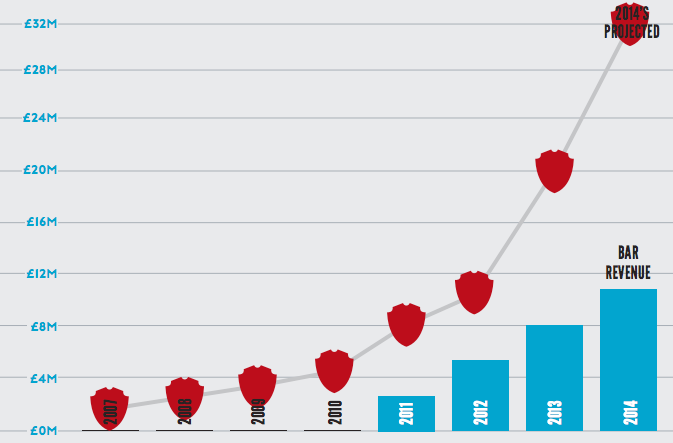 From a turnover of £8 million in 2011, they grew their turnover t0 over £30 million in 2014. At this time BrewDog only made up 0.046% of the UK beer market, which meant plenty of room for disruption and growth.

Another perk of being an Equity Punk, is that I am invited to different bar openings, tastings and other events throughout the year.

In 2015, I was delighted to attend the grand opening of BrewDog Shepherd’s Bush, with an in-house tasting with co-founder Martin Dickie.

THE JUGGERNAUT ROLLS ON

Brewdog have been relentless in their growth, their audacity, their PR and their overwhelming desire to make people as passionate about craft beer as they are.

In 2015, Brewdog overhauled their manufacturing process and began to brew most of their beers in cans, rather than bottles. Why? Cans are lightweight. They keep out light and oxygen, helping the beer to stay fresh and tasting awesome. But most importantly, cans are environmentally friendly.

Over the next four years, Brewdog would grow exponentially. Far beyond the growth mentioned above. From a turnover of £30 million in 2014, they hit over £200 million in 2019, with over £75 million of that revenue coming from their every expanding range of bars around the globe.

No-one could have predicted what was going to happen in 2020, and on what scale.

Once lockdown hit the UK, all BrewDog bars had to close which meant BrewDog lost 70% of it’s revenue overnight.

But like all great brands, they adapted, and they overcame.

They used their distillery to produce hand sanitiser for primary care (desperately needed at this time) and shipped over 200,000 units to NHS hospitals in the first few weeks.

They started using their trucks & drivers to do home deliveries of school lunches to those in isolation in local community. For free.

In late April they launched ‘Help NHS Heroes’ 12 packs of Punk IPA, which rolled off our canning lines. All the profits from every single case were donated to the NHS.

In May 2020 during lockdown, taking aim at the stupidity of Dominic Cummings, they launched a new brew – Barnard Castle Eye Test. It was a top seller online, and even new Labour leader Keir Starmer couldn’t resist getting in on the action.

Brewdog captain, James Watt, admitted that at the end of March when revenues dropped, that he honesty did not know if BrewDog would survive.

However, despite 101 of their bars being closed & all of the business challenges they continue to face on a daily basis through the pandemic, they somehow managed to grow their total revenue for 2020 by 10%.

Impressive to say the least.

From switching to cans in 2015, Brewdog made a HUGE leap in August 2020, becoming the first beer brand to become carbon negative. That means they take twice as much carbon out of the air as they emit.

They purchased 2,000 acres of woodland forest in Scotland, and are going to plant a tree for every Equity Punk currently enrolled (yay, I get my own tree!). 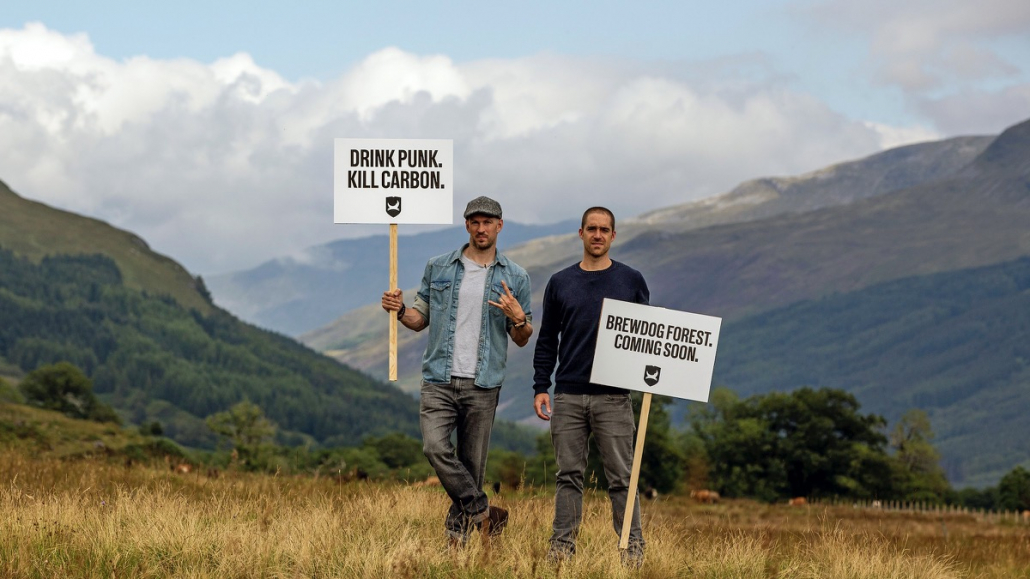 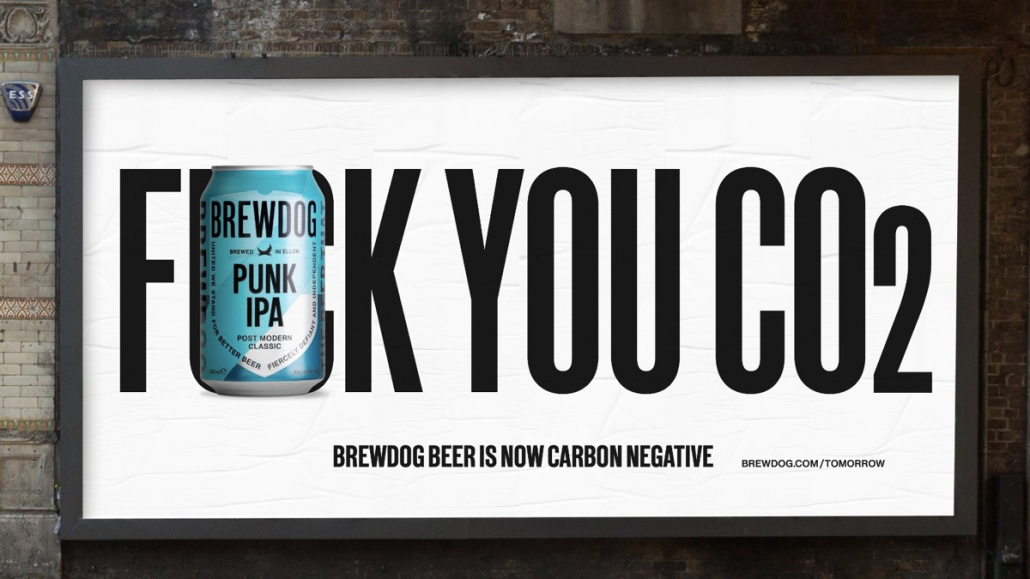 By 2022, Brewdog will have planted 1 million trees up in Scotland (near Loch Lomond for those interested).

Then in February 2021, BrewDog achieved B Corp certification. B Corps are a global community of businesses that meet the highest standards of verified social & environmental performance & public transparency, ultimately to help build a better world.

Even during the Coronavirus pandemic, they’ve adapted, survived and shown businesses can be a force for good.

And they are still going full steam ahead with new retail locations, including hotels in Manchester, Berlin & Brisbane and iconic locations in Mumbai, Las Vegas, Amsterdam, Sydney, Cleveland and Milan.

The UK and USA have seen a small boom in crowdfunding projects. Websites such as Seedrs and Crowdcube have new projects launching weekly, with startups and small businesses giving you their pitch and a chance to invest.

BrewDog raised £7 million over the past four years, from three separate equity fund-raising issues. Given interest rates on savings accounts are nothing but dire at the moment, crowdfunding is worth a look…but remember, there are risks!

Want to own your own shares in BrewDog? Now you can. Find out more!

Despite my preaching, not all my friends and family like BrewDog beers. Some are pretty strong, but if you’re looking for a nice few starter ales, I would strongly recommend Dead Pony Club pale ale, Elvis Juice for a fresh, smooth citrus burst to your beer, and Jack Hammer, for a slightly stronger, fruity flavour.

Do you fancy owning your own shares in BrewDog? Well, good news – BrewDog launched Equity For Punks Tomorrow (Sept 2020), and are looking to secure £7.5 million from craft beer lovers around the world.

For more information, visit www.brewdog.com/equityforpunks and don’t forget to enter my referral code for more goodies – R432272 😉 You can buy shares up to the end of January 2021 (although the crowdfunding round may close sooner).