Every so often I have a travel experience that sticks in my head. It’s an experience and a set of memories that makes me grin spontaneously on a random day, and makes a great meal time story. Ever get that?

Rhino Safari Camp, situated on the South East shore of Lake Kariba, provided five of those travel experiences in under 24 hours, which is why it was one of my favourite places in Zimbabwe. 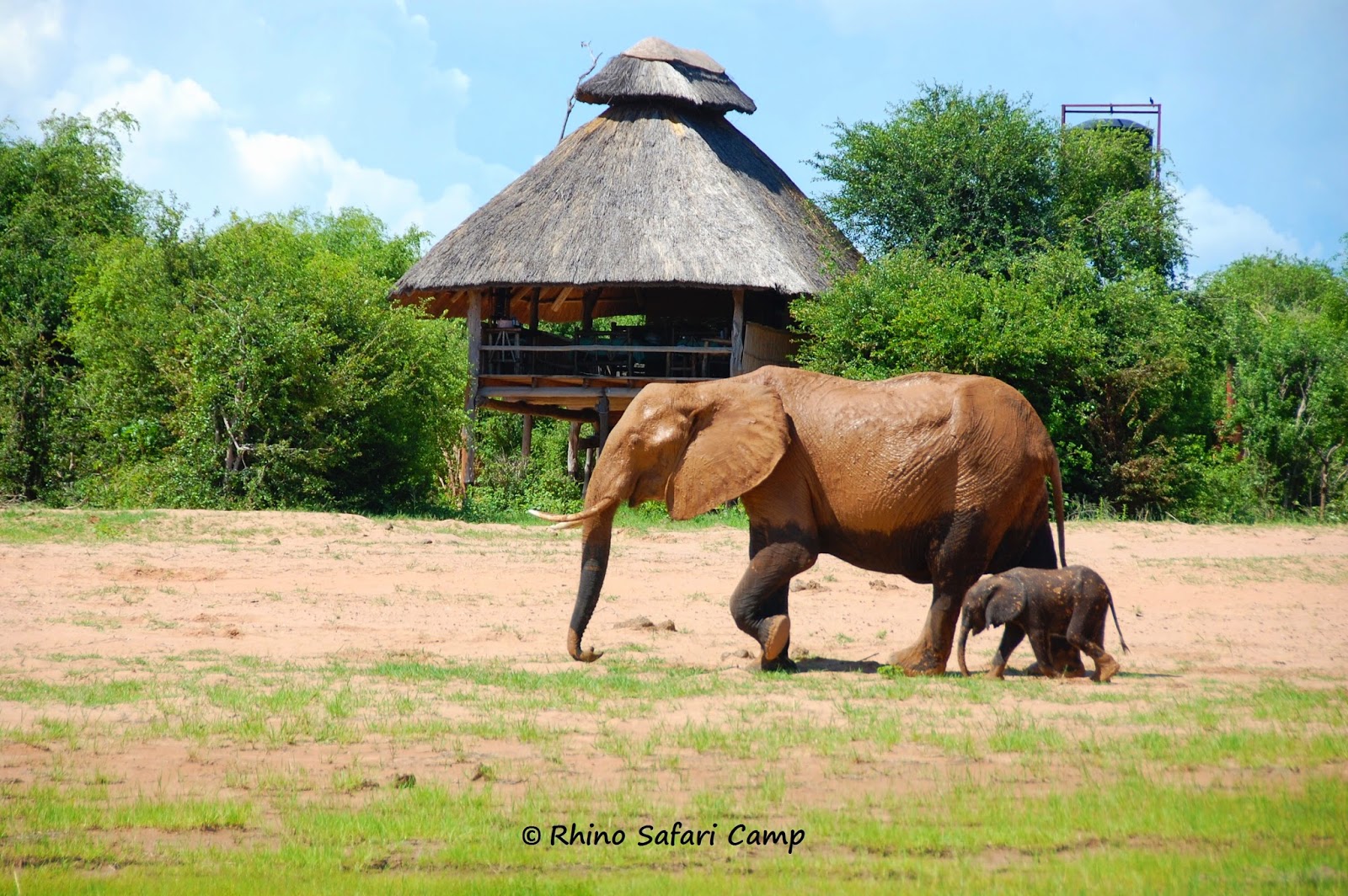 CROCODILES ON THE SHORE

Our Rhino Safari Camp experience began as we made our way from the houseboat rig onto the beach next to the camp. The sun was beginning to set, we were well-watered from a few ciders, and we could see Jenny and the camp team had set up chairs on the beach with drinks and nibbles for us to watch the sunset.

It was the perfect start.

Except…we had heard on more than one occasion that Lake Kariba is overflowed with crocodiles. Locals say there is a crocodile every 10 metres along its shore. So, when we had to depart the rig, navigate the shallow waters and walk to the beach, there were some critical faces. Some went for a piggy back from the camp team. Others (like me) just ploughed on through. If the camp team thought it was safe enough, it was safe enough for me.

As we arrived around the headland on the rig, we noticed several elephants a few hundred metres away, nibbling on green shoots of tall bushes.

As Jenny had just finished her welcome and safety briefing, said elephants were now 50 metres away and had obviously decided the bushes nearer the camp were much tastier.

Looking inland we had elephants close by, and looking out over the Lake we had (yet another) stunning sunset. 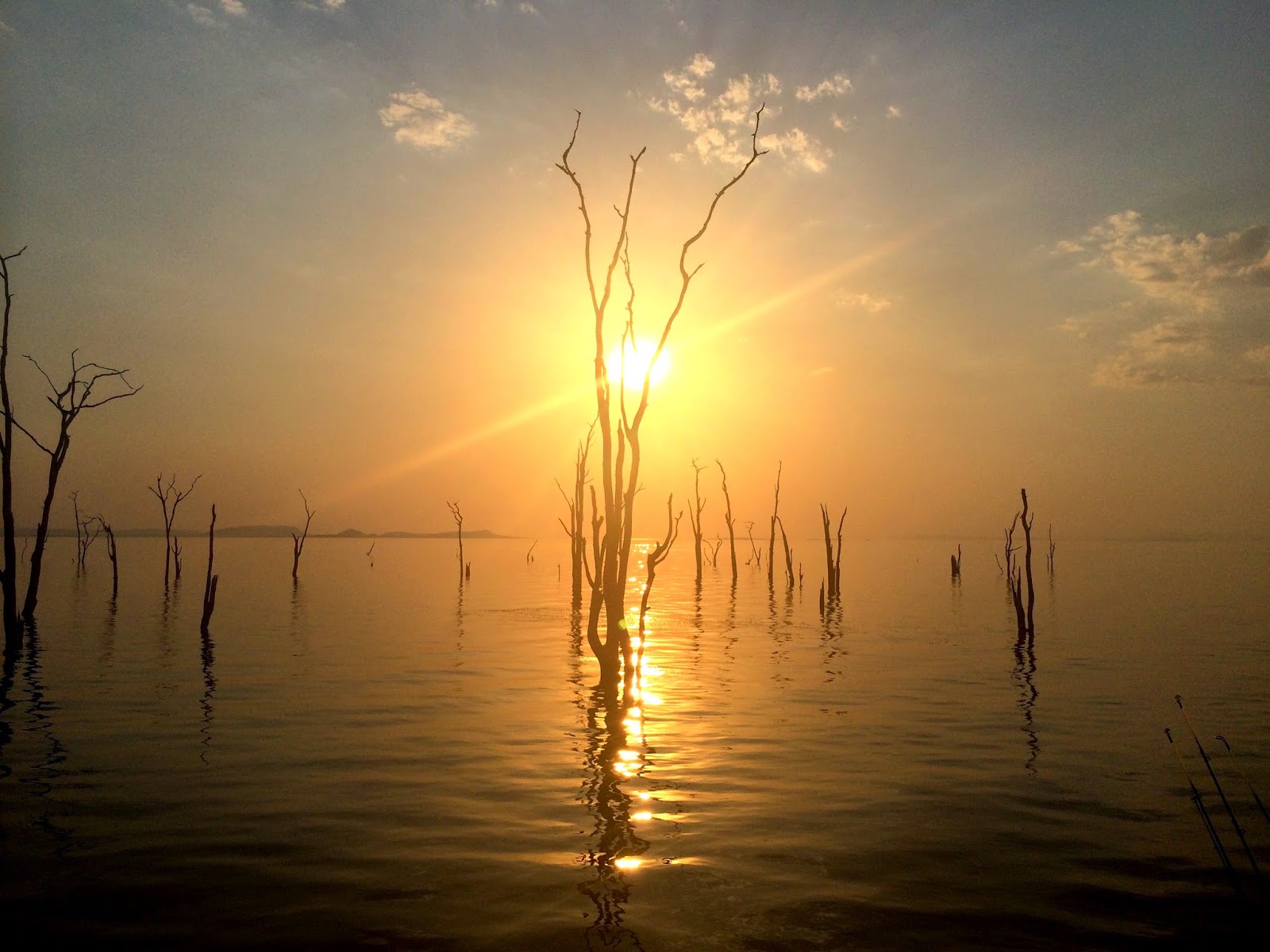 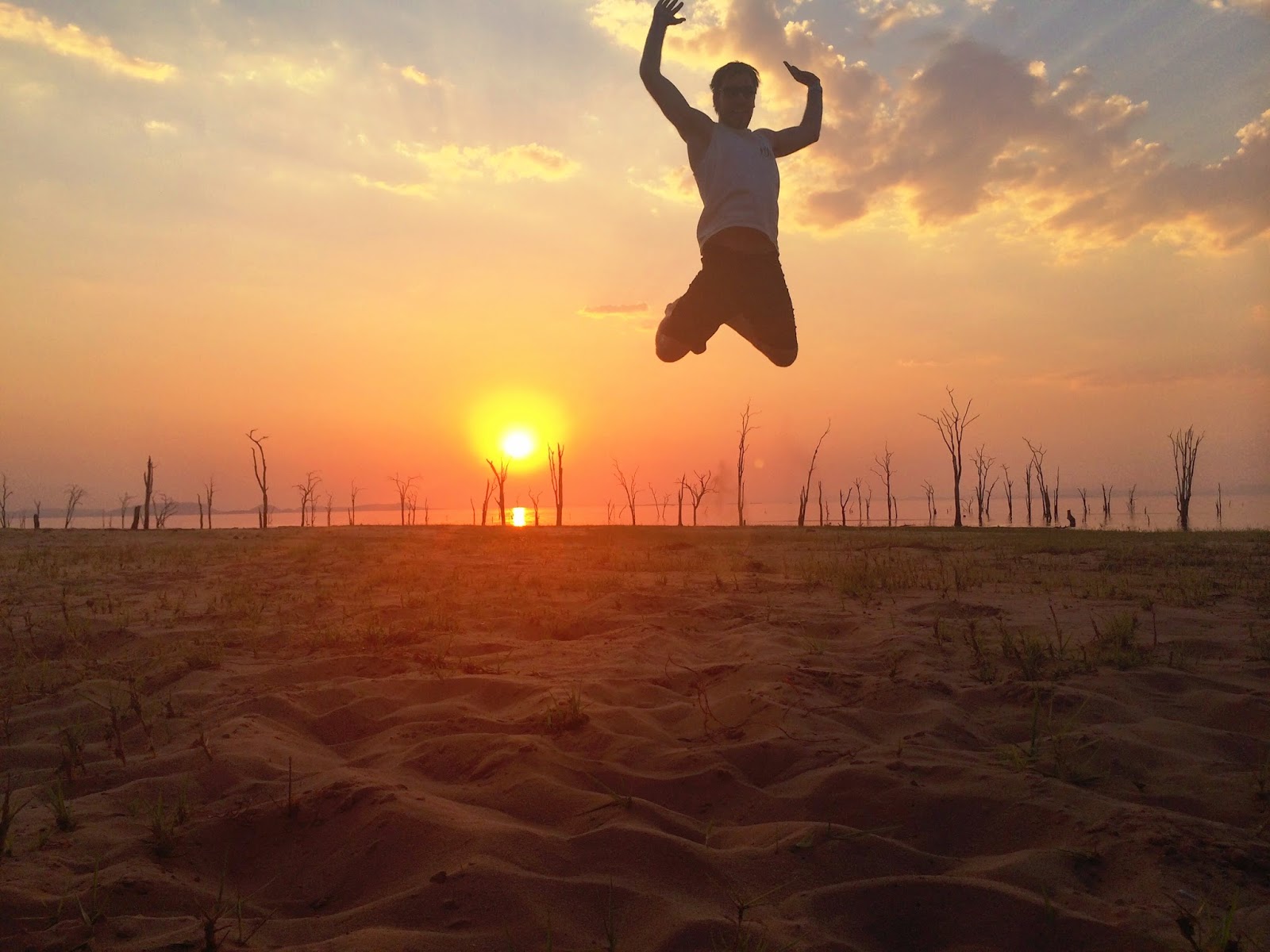 This, for me, epitomised Zimbabwe. Personal, close-to-nature, unique experiences you would never have anywhere else in the world.

The daydreaming didn’t last long though.

The elephants were becoming ‘playful’, and although you don’t think of elephants as dangerous animals, you wouldn’t want to get in the way of one if it was running towards you. As was about to be the case with a particularly frisky elephant.

Jenny calmly explained we should move – SLOWLY – towards the camp, leaving everything behind. One by one we tiptoed over the deadwood and made it safely to the camp, as the guides – Steve and Simeon – made sure the path was safe behind us.

Quite the start to our Rhino Safari Camp experience!

I’d heard a lot about Rhino Safari Camp before I arrived, with most people saying it was an authentic, almost back-to-nature experience. To a large extend, this is spot on.

The main camp and all the rooms are elevated on stilts. There are no enclosed walls. The thatch roof simply slopes down over all sides to cover you from the elements. That means that animals can roam – freely – around your room, and underneath your room.

Elephants, rhino and lions can frequently be found walking through the camp. Yes, really. 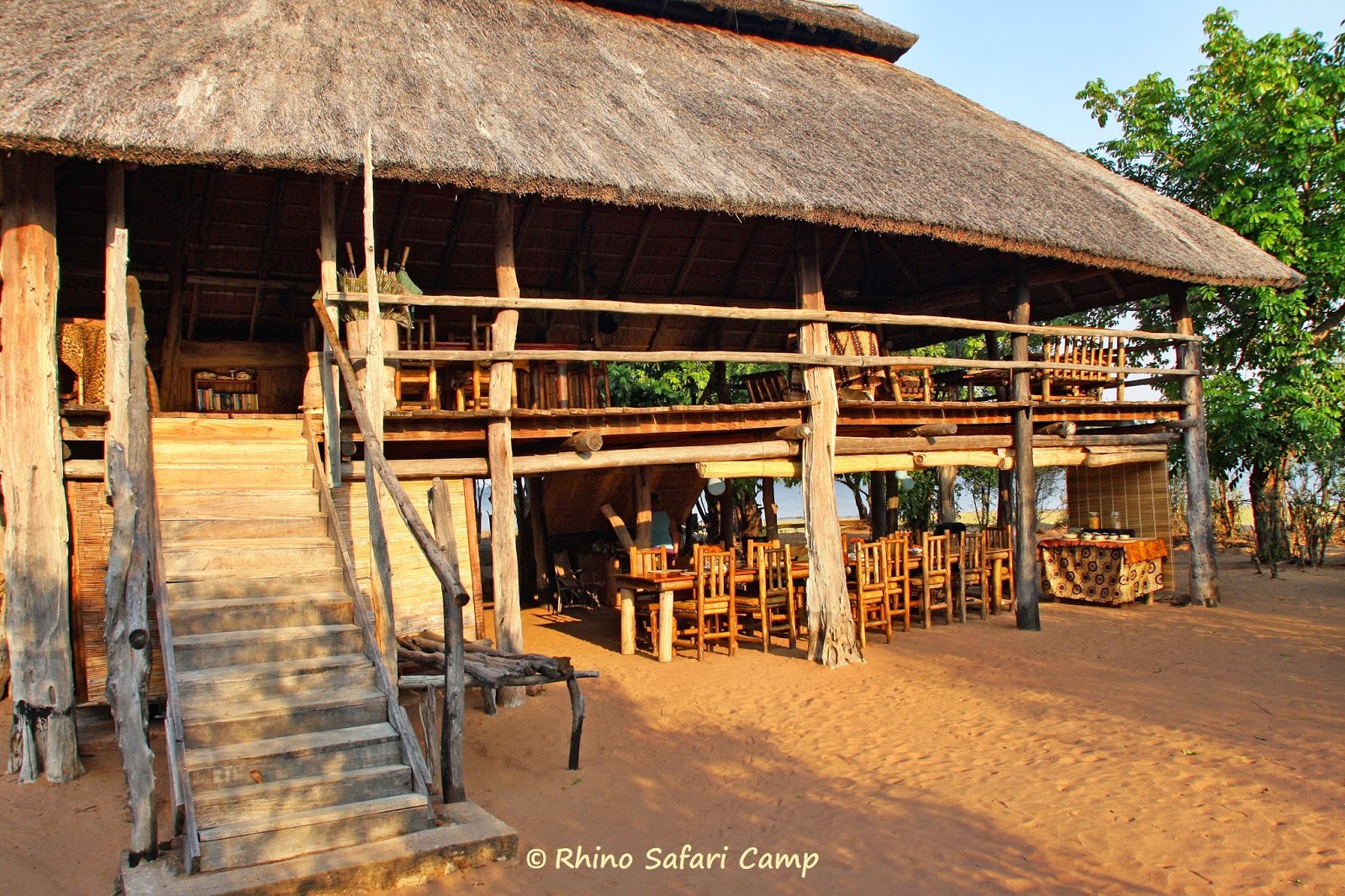 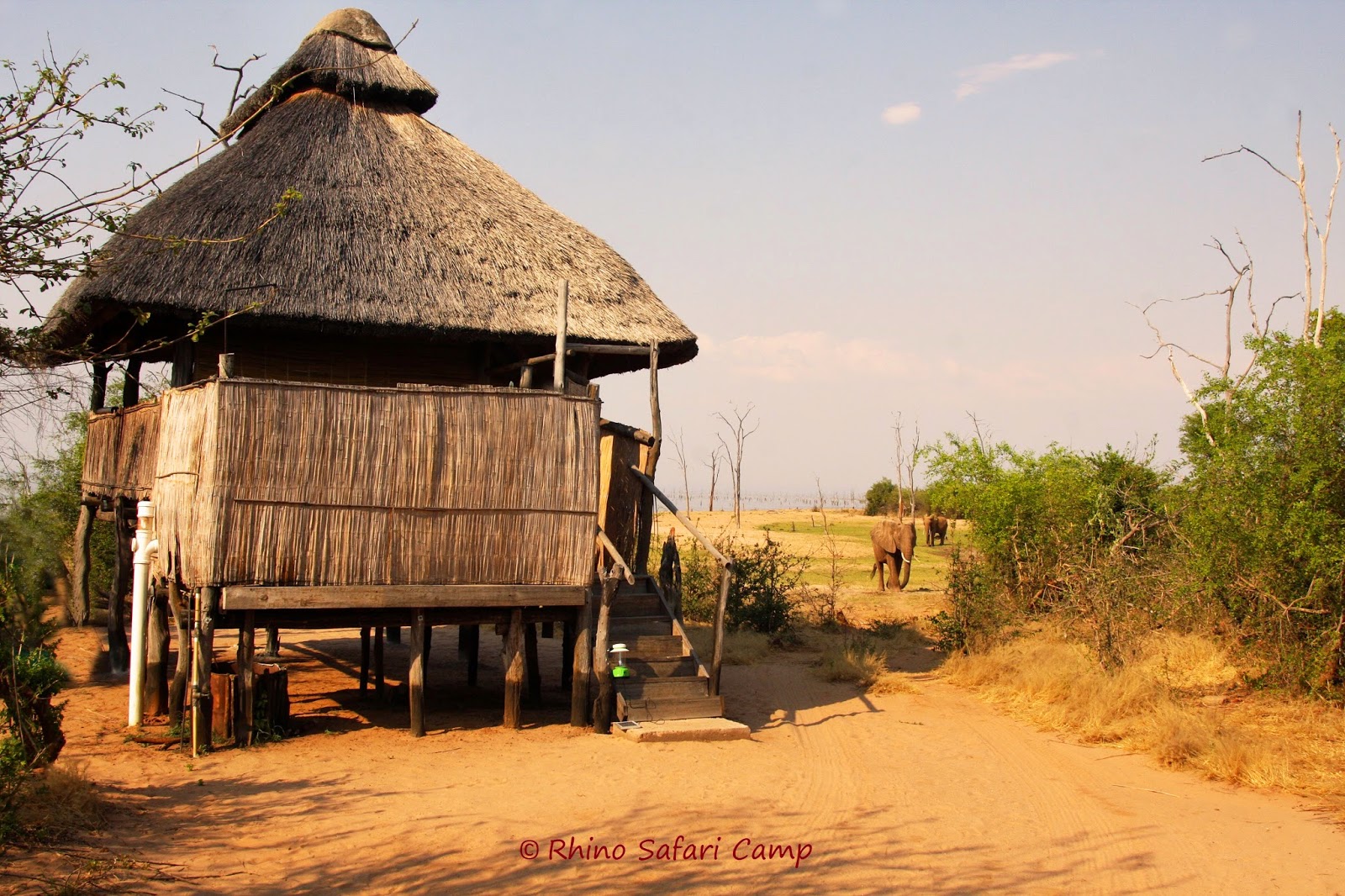 YOU NEED A GUIDE (AND A RIFLE) TO WALK AROUND

In other safari camp resorts or lodges, you are free to roam around. Not so much at Rhino Safari Camp. Because of it’s openness, only the guides can tell you when it is safe to walk between your room and the camp.

Once the sun goes down, you don’t go anywhere without a guide. Or his rifle. Steve and Simeon were great at making sure everyone was completely safe in their rooms and at the main camp.

One of my favourite experiences at Rhino Safari Lodge was sitting around the campfire next to the beach, telling stories, and getting lost in the flames.

Following an excellent dinner, we retired to chairs around the fire, for Jenny to tell us how Rhino began, and some of the stories of the animals around the camp. 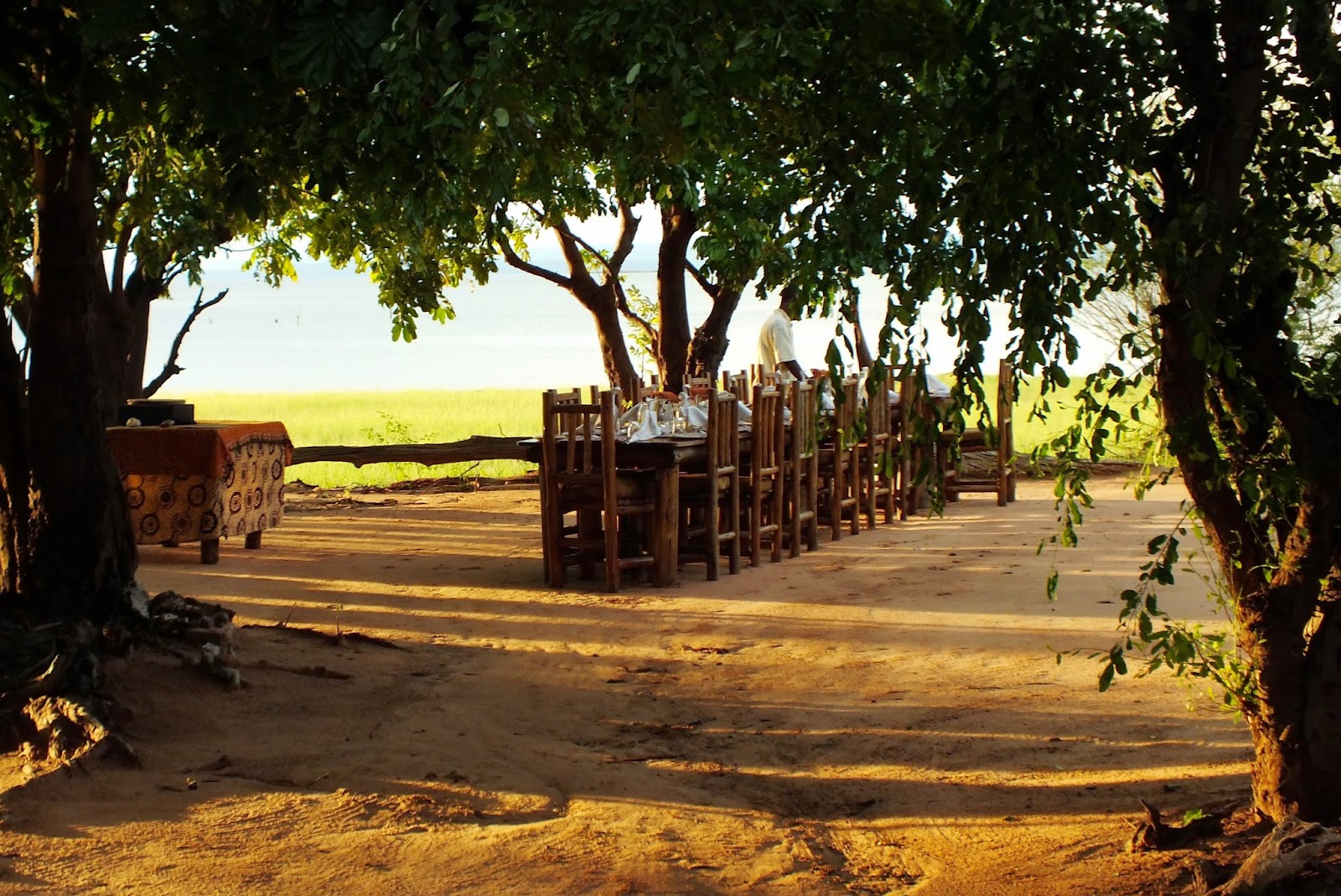 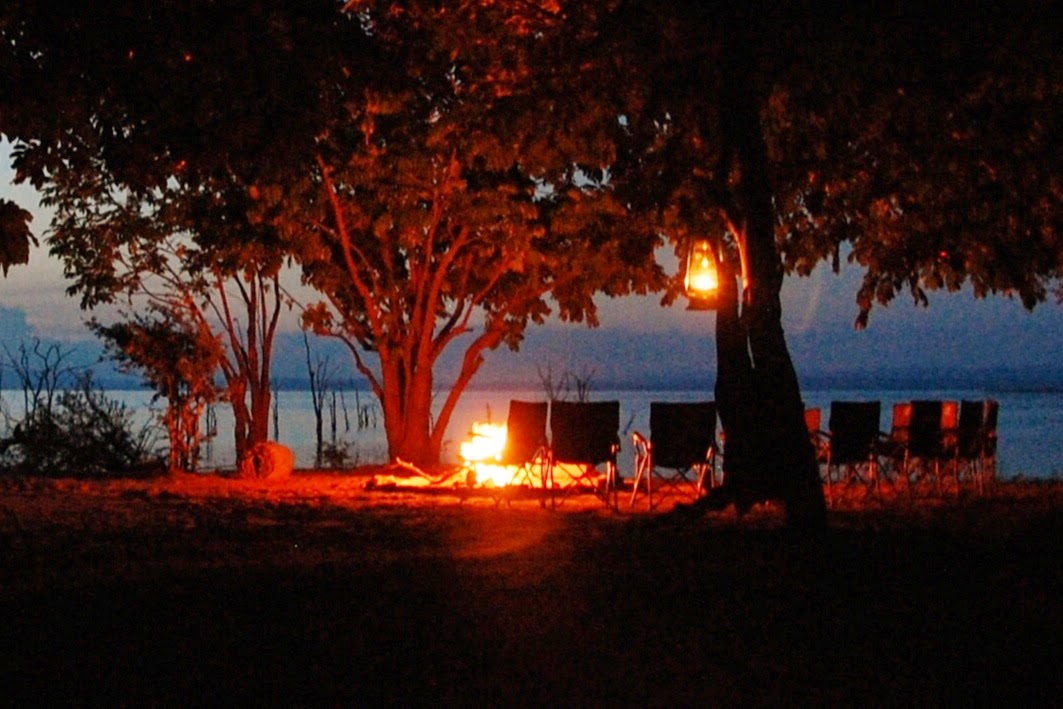 Given the hustle and bustle of the UK, and the ‘constantly online’ mindset, Rhino Safari Camp was a complete juxtaposition, and a welcome break. All you could hear was the flames crackling, and lap of the waves against the shore, and with no wifi, you were forced into socialising and telling stories. And I loved every minute.

With the campfire extinguished, we were guided back to our rooms by Steve and Simeon. With temperatures in the high 30’s during the day, the air was still warm and muggy. Getting to sleep in the sticky heat may be difficult. Thankfully, with weary eyes and legs, it wasn’t difficult at all.

It was only when the howling wind woke me up entangled in my mosquito net did I struggle. With Rhino Safari Camp being on a headland, it’s open to the elements, and this night it felt as if Hurricane Kariba was blowing through the camp.

It was a welcome cool wind, but it was causing havoc, blowing items all over the room. With strategic placement of a few heavy shoes, we pinned down the mosquito net and nodded back off to sleep in the cooling wind.

The next morning, we were up at 5am for a morning game drive. After a little GoPro filming (see the video at the bottom of this post), we grabbed our bags and headed back to camp. We were in room 6 – the room furthest away from the main camp area.

Hannah and hannah were in room 3. As we approached their room we noticed something odd on the roof. Was it a skull? A flag? Nope, it was a pair of bikini bottoms! 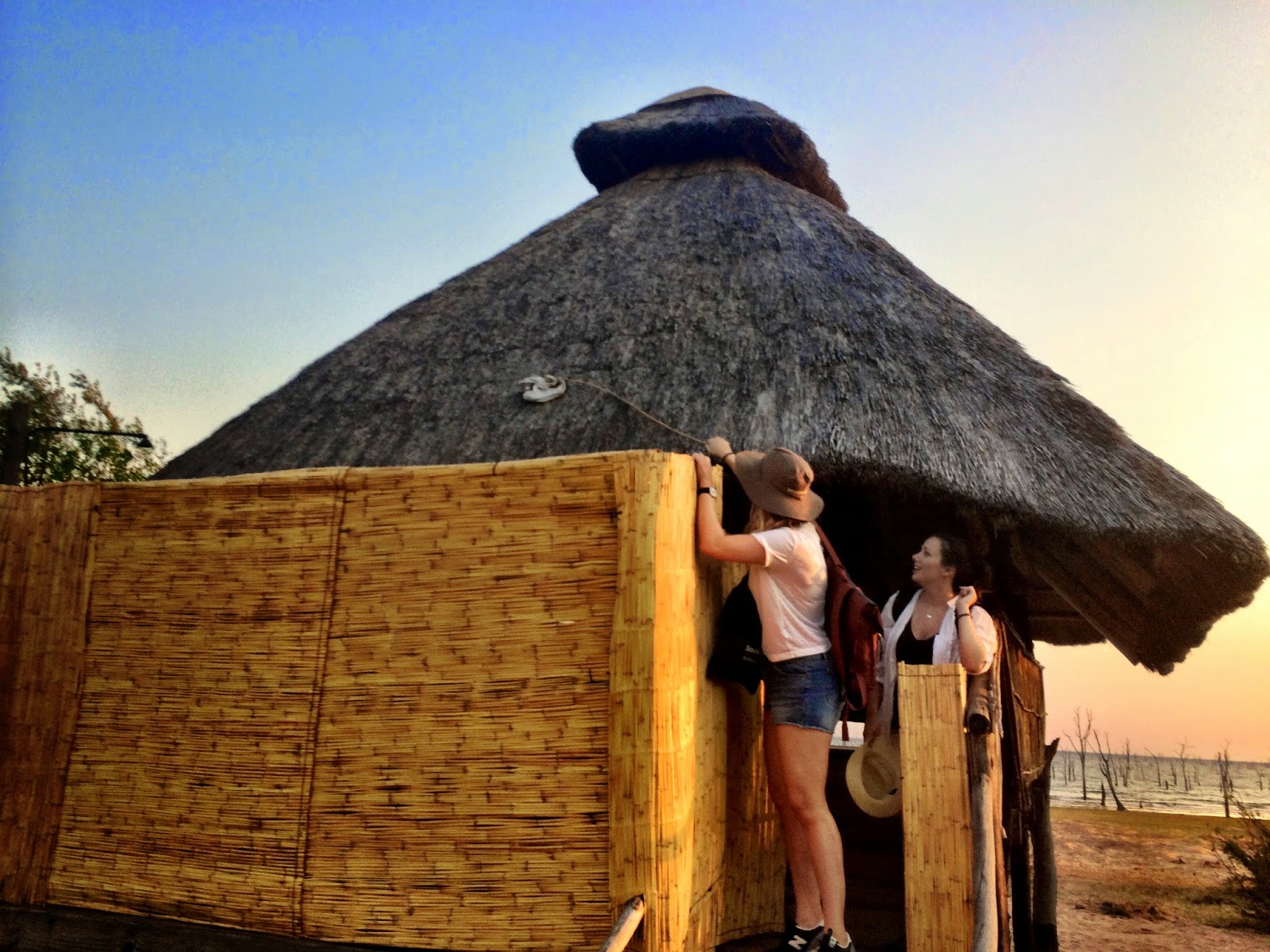 GAME DRIVE ON THE CONCESSION

Rhino Safari Camp has a private concession within the Matusadona National Park that covers 180 hectares. But there are no fences around the camp or the concession. That means the wildlife can come and go as they please.

We set off around the headland, eventually driving into the sunrise. With the Land Rover ticking over and the breeze of the lake, it was a very nice start to the day.

We gradually worked our way around the concession, and then headed deeper into Matusadona National Park. We had heard that an elephant had got stuck in the mud the day before, and had been taken down by a pride of lions, so we headed for the reported area to see if we could find the kill location.

En route, we got stopped in our tracks by a couple of elephants, desperate to find any green shoots remaining in what was becoming an increasingly arid area. 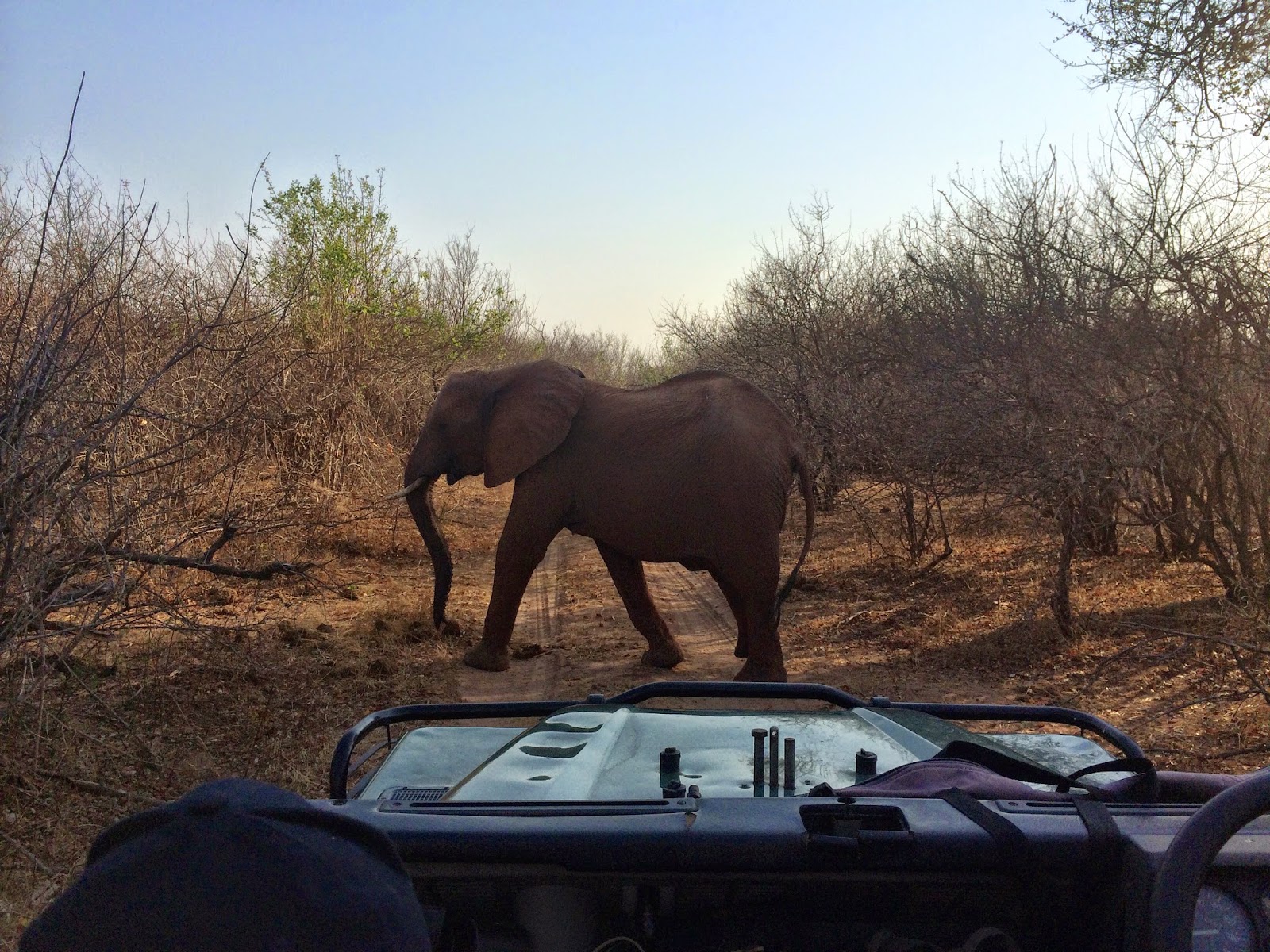 Land Rover Defenders can pretty much go anywhere, but after a couple of hours driving around the headland, we couldn’t go any further.

“Ok, let’s get out of the vehicle. We can track the lions on foot from here”

My only previous experience of safari was in South Africa, and under no circumstances was anyone allowed to leave the vehicle. Right now, we were heading out, on foot, in search of lions. I think a few comfort zones of people in the group were breached, but for me, this was new territory. But we trusted Steve and Simeon. The adrenaline was up, and we followed them into the bush.

Despite Steve and Simeon’s best efforts, we still didn’t manage to find the kill site. The adventure of being on foot and off the beaten path was pretty incredible, and certainly provided a great travel story!

With the game drive done, it was time to re-board the rig and Umbozha houseboat.

Rhino Safari Camp was an incredible experience. Jenny, Karl, Simeon and Steve provide a safe, friendly experience in a very authentic, unique location. If you want to stay somewhere that is disconnected from life, but connected with African nature, this is the place for you.

Have a peek at the video below for a walkthrough of the camp and the game drive experience.