Kariba is a town that has been deprived of tourism for a long time. For such a beautiful part of Zimbabwe, access has been a problem in the past. But since Air Zimbabwe reconnected Kariba with Harare – flying three times a week – the area has been revitalised, and is thriving once more, bringing both local and international holidaymakers into the region.

Can’t be bothered reading the whole post? Then scroll to the bottom and check out my video of our Umbozha houseboat experience 🙂

Following our short 40 minute flight from Harare, we hopped in our transfer buses and headed for our base for the next three days – a Lake Kariba houseboat, called Umbozha. 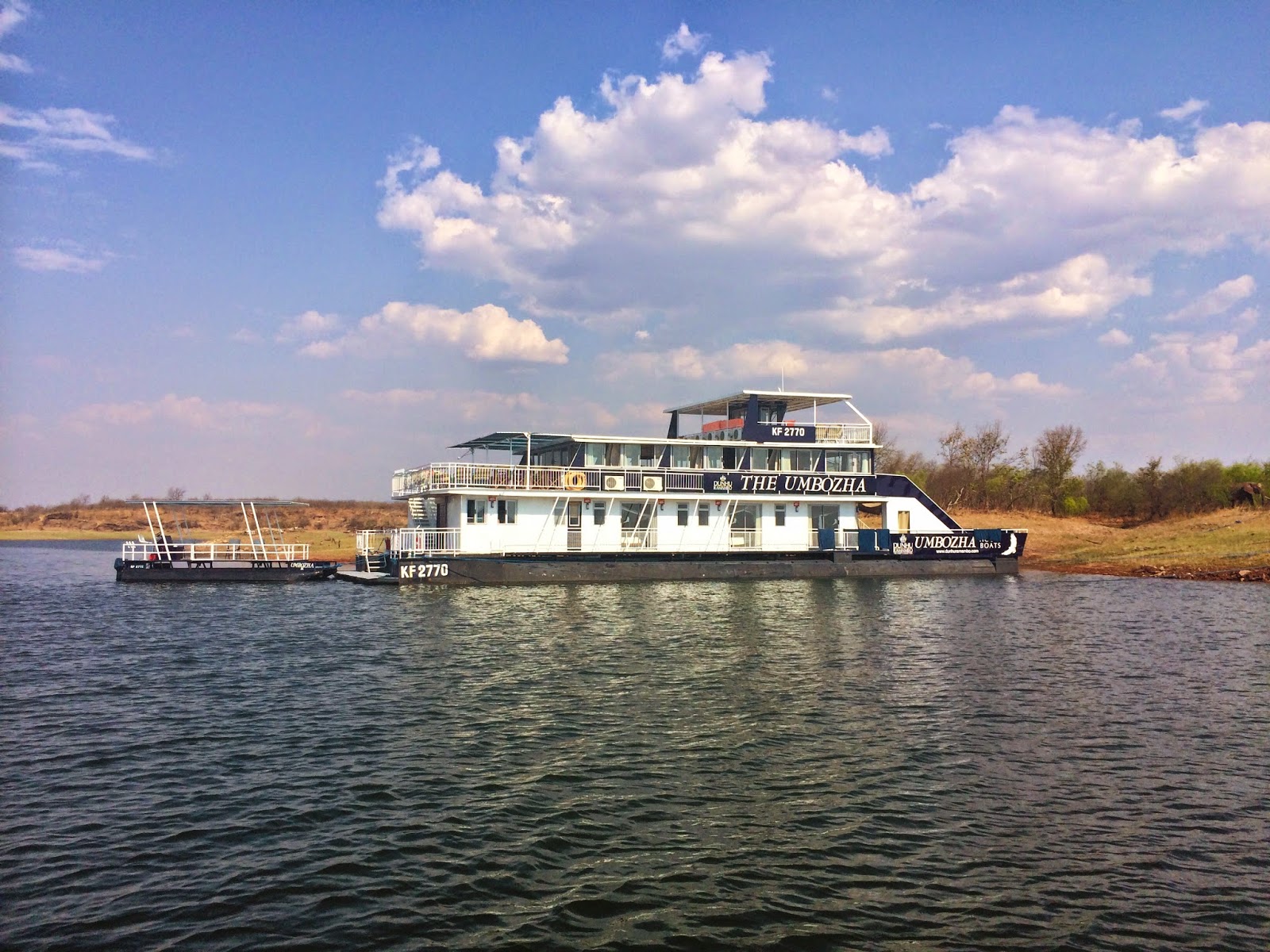 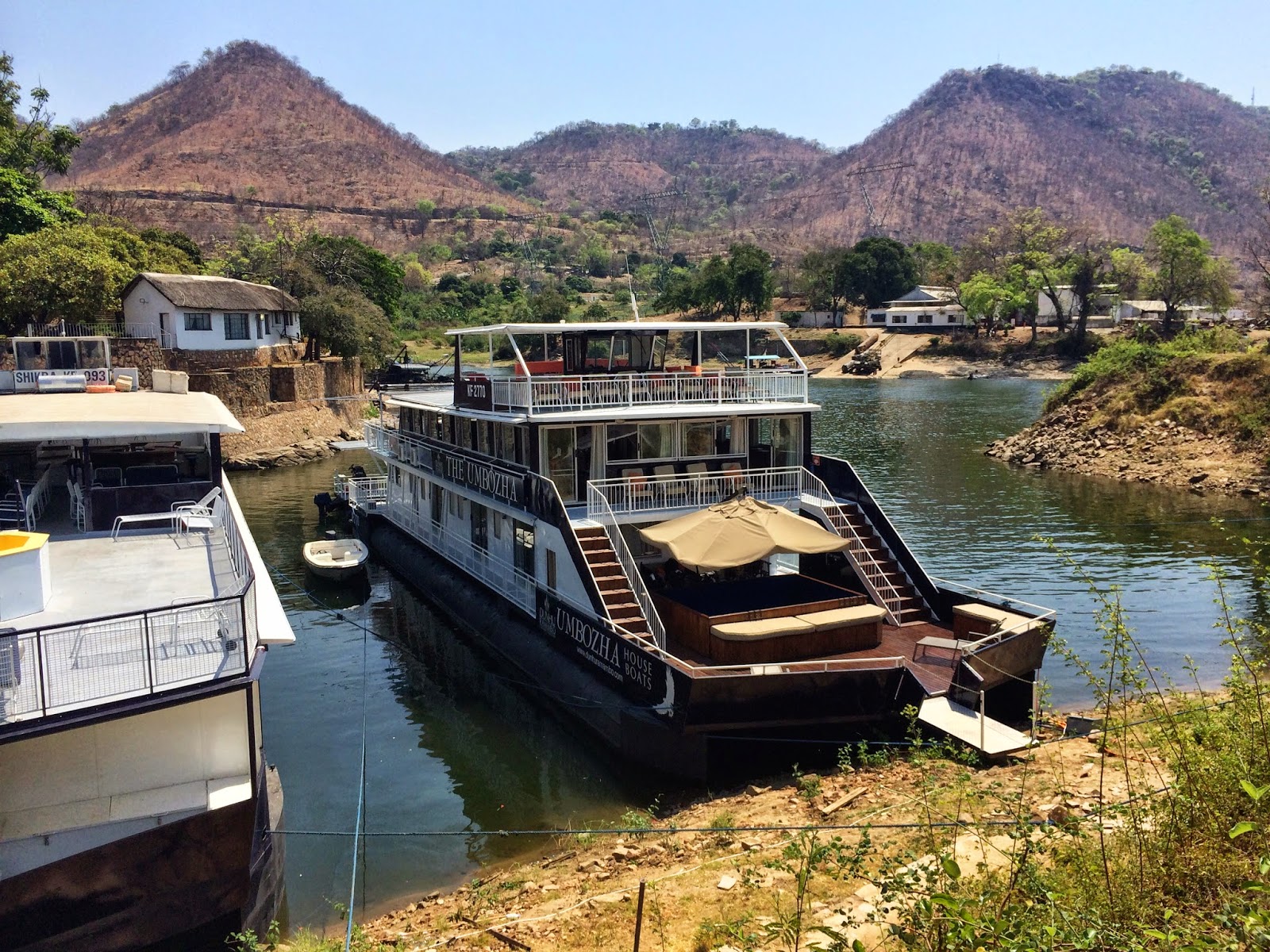 For those who follow my blog, you’ll know this wasn’t my first houseboat experience. But where ‘Rock The Houseboat’ catered for a slightly younger audience, with paint-balling ducks and kayaking, the Umbozha had more of a luxury feel.

Umbozha (which translates as ‘affluence’) has nine rooms, with a mix of double, quads and twin rooms located on the lower deck. On the same deck at the front of the boat there is a small pool and an area for lounging. Upstairs there is a main living and dining area, and the top deck holds the bridge and more space for soaking up the sun.

Coming from the hustle and bustle of Harare, Umbozha was a welcome break, and we wasted no time in relaxing. We had a six hour journey to get to our next destination (Bumi Hills), so the cold beers were opened and we made the most of the mid-morning sun on the deck. 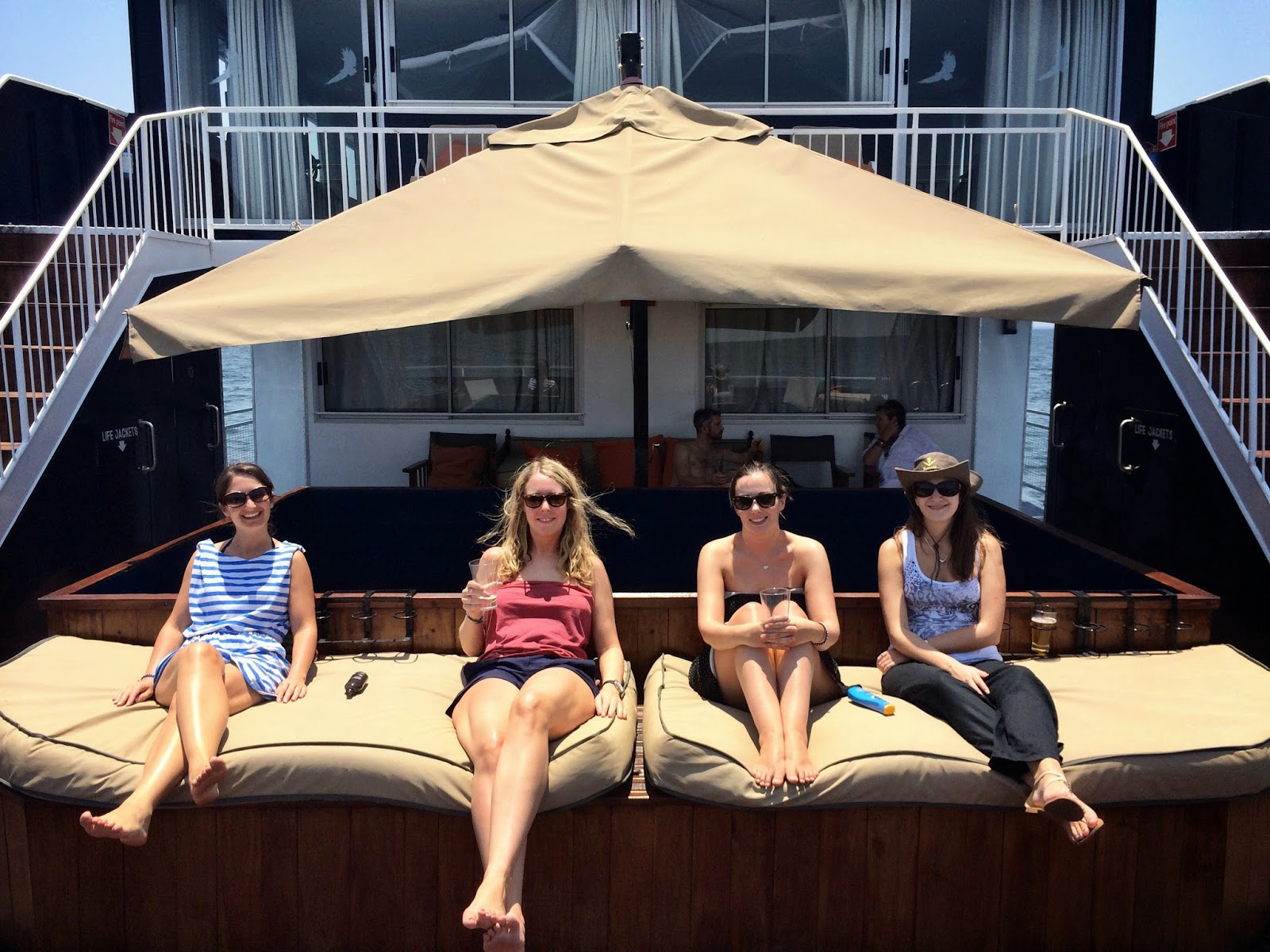 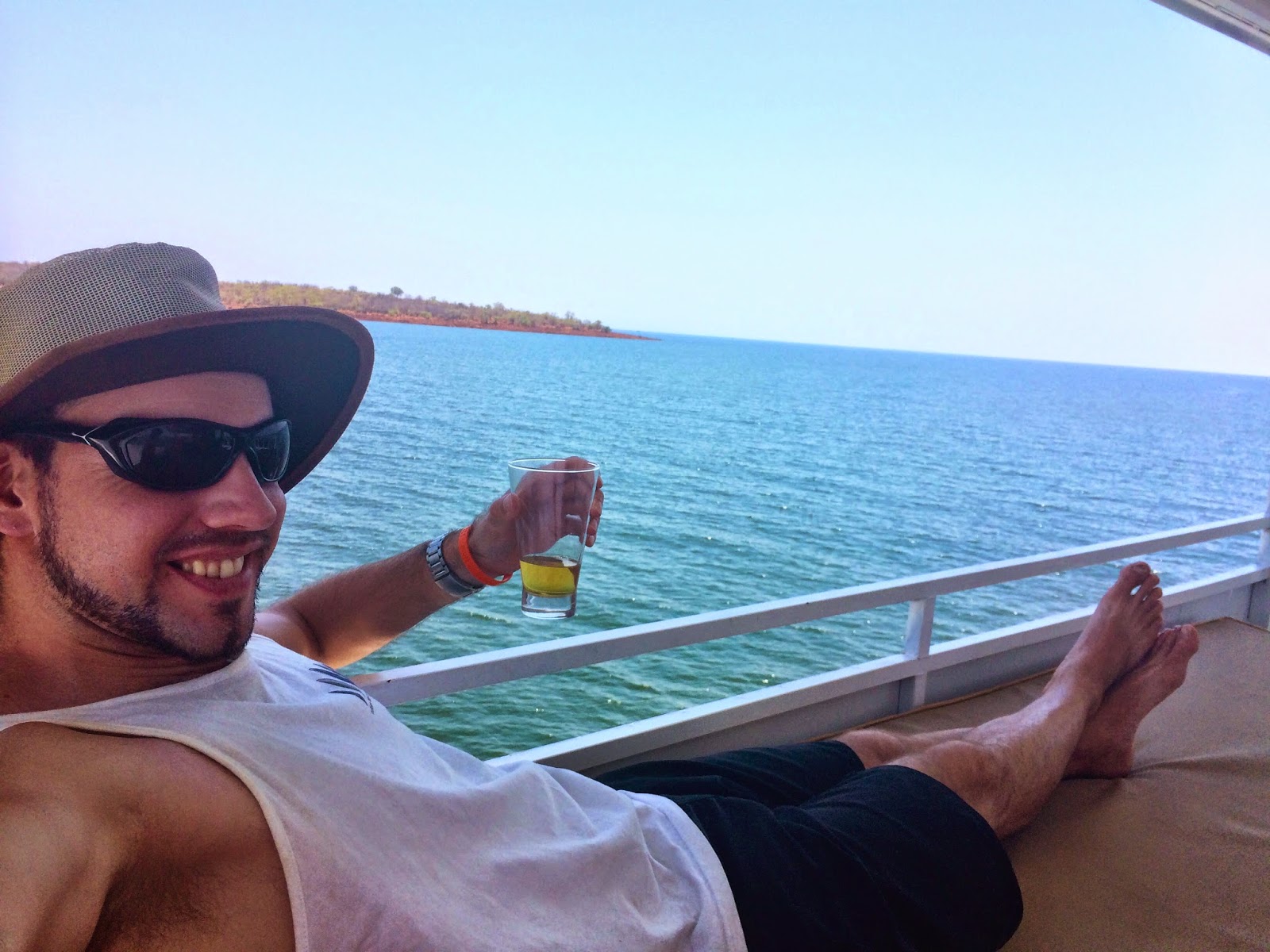 There are plenty of activities that come part of the Umbozha package. With two ribs at the back of the boat we were able to go on ‘lake game drives’, taking in some amazing views of elephants, crocodiles and fish eagles along the shoreline. 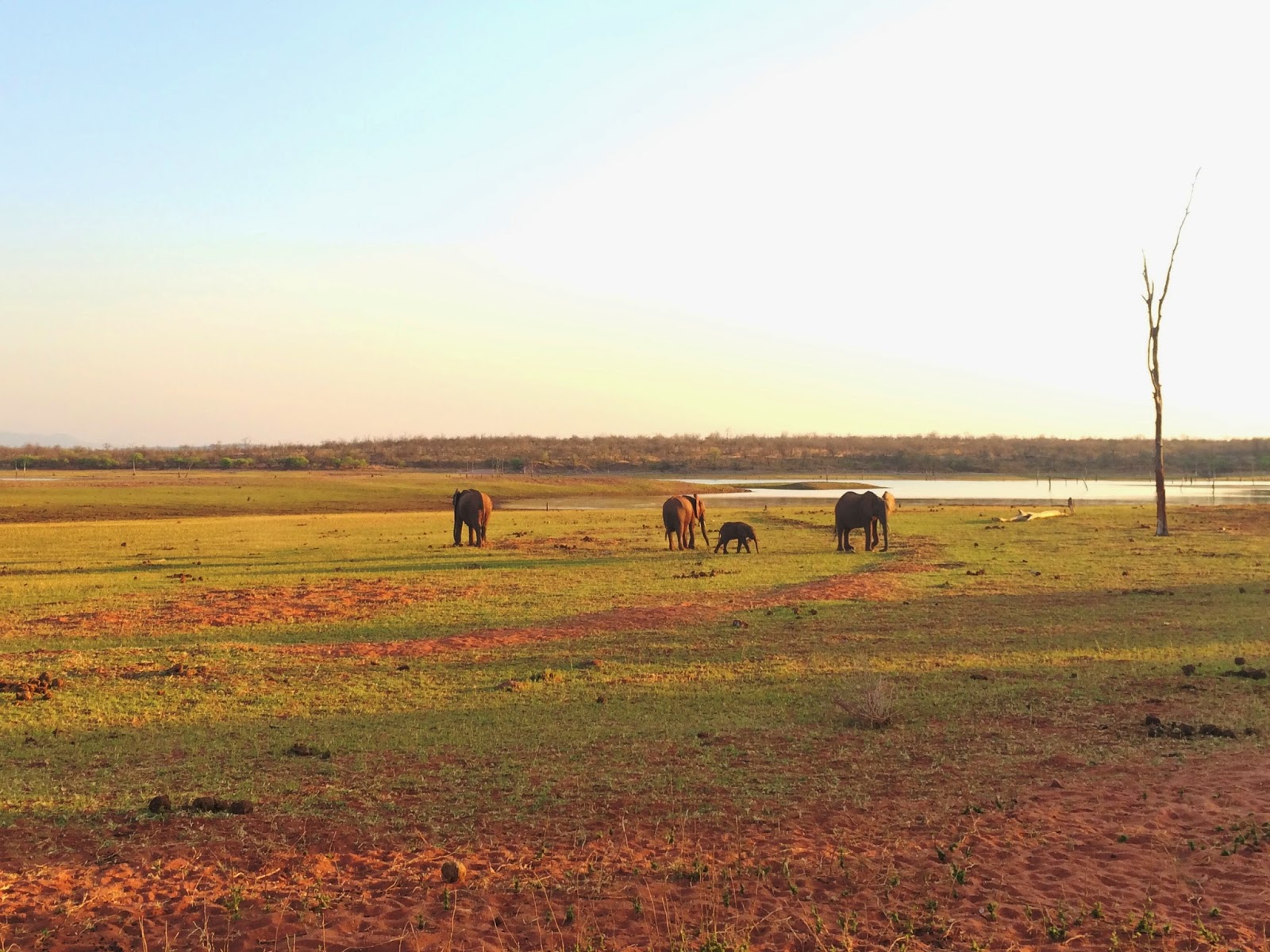 Lake Kariba is also known for it’s great fishing, particularly tiger fish and bream. As with the houseboat in New Zealand, there was a competition for who could catch the first fish. I wasted no time, and cast the line into the lake, sipping on a cold Zambezi beer between reels.

I am proud to say I caught the first fish again! Well, sort of. When I say fish, it was probably no bigger that a goldfish. And when I say caught, the fish had it’s mouth around my bait, and after 2 minutes out of the water it decided to release it’s grip, and then plotted back into the water. A little embarrassing to say the least.

“It takes great skill to catch a fish of that size“, came the shout from a local Zimbabwean. Safe to say that cemented the embarrassment.

Lake Kariba is deceptively large. It is around 280km long – about the same distance from Southend to Cornwall, and around 30km wide. In the shallows there are crocodiles a plenty, so we were warned not to mess around when exiting the boat on foot!

As the Zambezi river was flooded by the dam in the early 1960’s, the water rose, covering forests of trees that formed the old Zambezi valley. These dead trees are still standing, and poke out of the water in the shallows, providing an eerie perspective on the history of the lake. 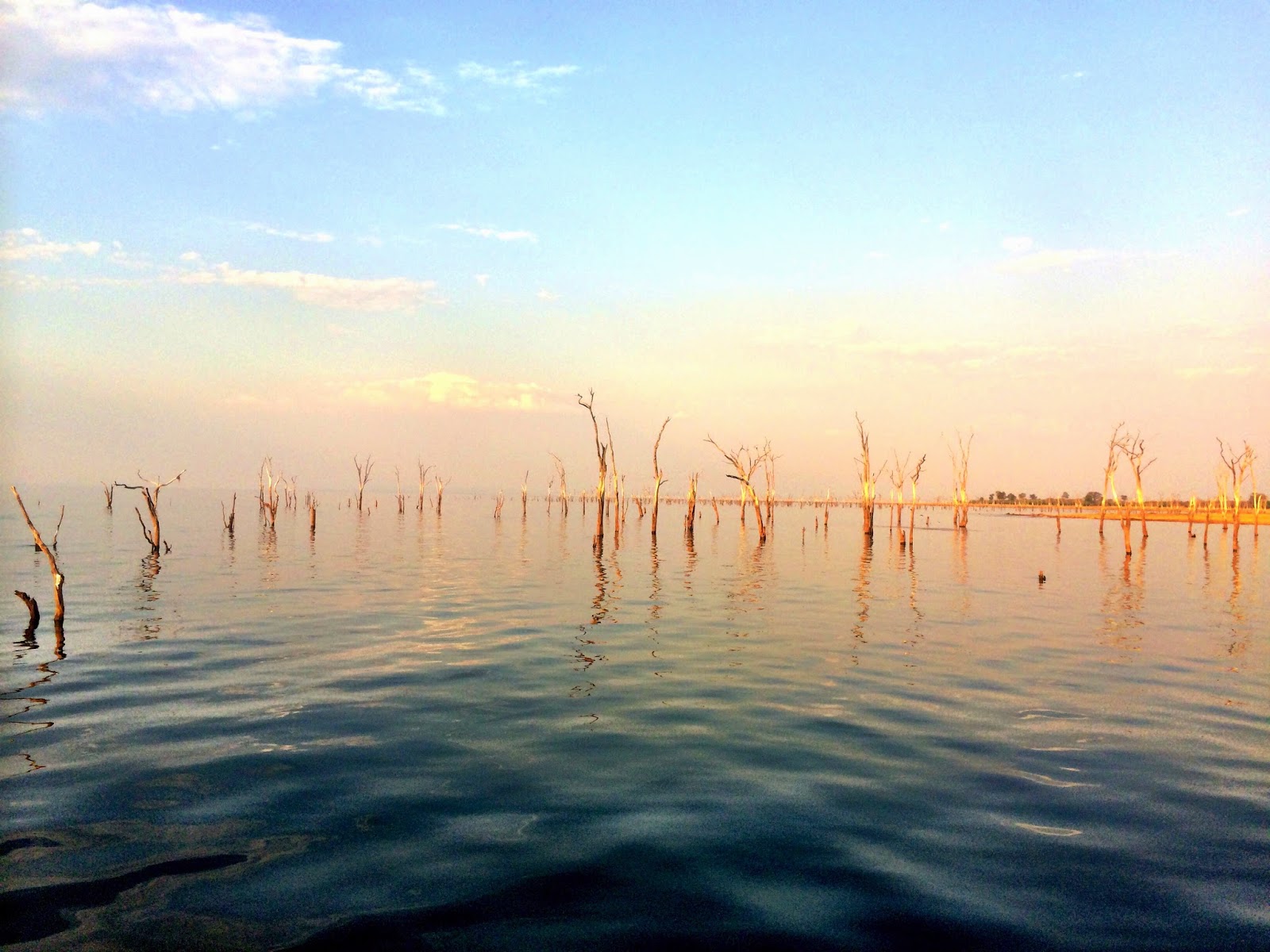 As the lake is man made, it has a very fragile ecosystem, which can make or break several species all at once.

Dotted around various points around the shore, there are markers that indicate the highest water levels of the lake. Each time I noticed that the highest level was in 2011, and we were told a story of how this rise had a dramatic effect on the wildlife.

Impala and buffalo rely on the grasslands to graze, but as the water level rose above the grasslands in 2011, there was no food for all the buffalo and impale, so many died and their numbers declined. At the same time, the lion population rose dramatically, because there was so much buffalo and impala easily available, and only recently have the numbers of buffalo, impala and lion returned to more stable levels.

A fish farming project introduced to Lake Kariba a decade ago, saw crayfish imported from Australia. At some point, the fish farm was shut down, but everyone forgot about the crayfish. They escaped and bred in their hundreds.

Scientists believe that the crayfish is now breeding out of control in Lake Kariba. Crocodiles don’t eat them, the locals don’t eat them (they are seen as alien to locals), and tiger fish thrive in deeper waters. In fact the pesky crayfish feeds on everything in the lake, it is affecting the ecological chain, much like the high waters of the lake in 2011.

With it’s thriving numbers, the crayfish are easy to catch, so to help reduce the population a little, the Umbozha crew cast their nets and we were given fresh crayfish to eat each day on board the boat. 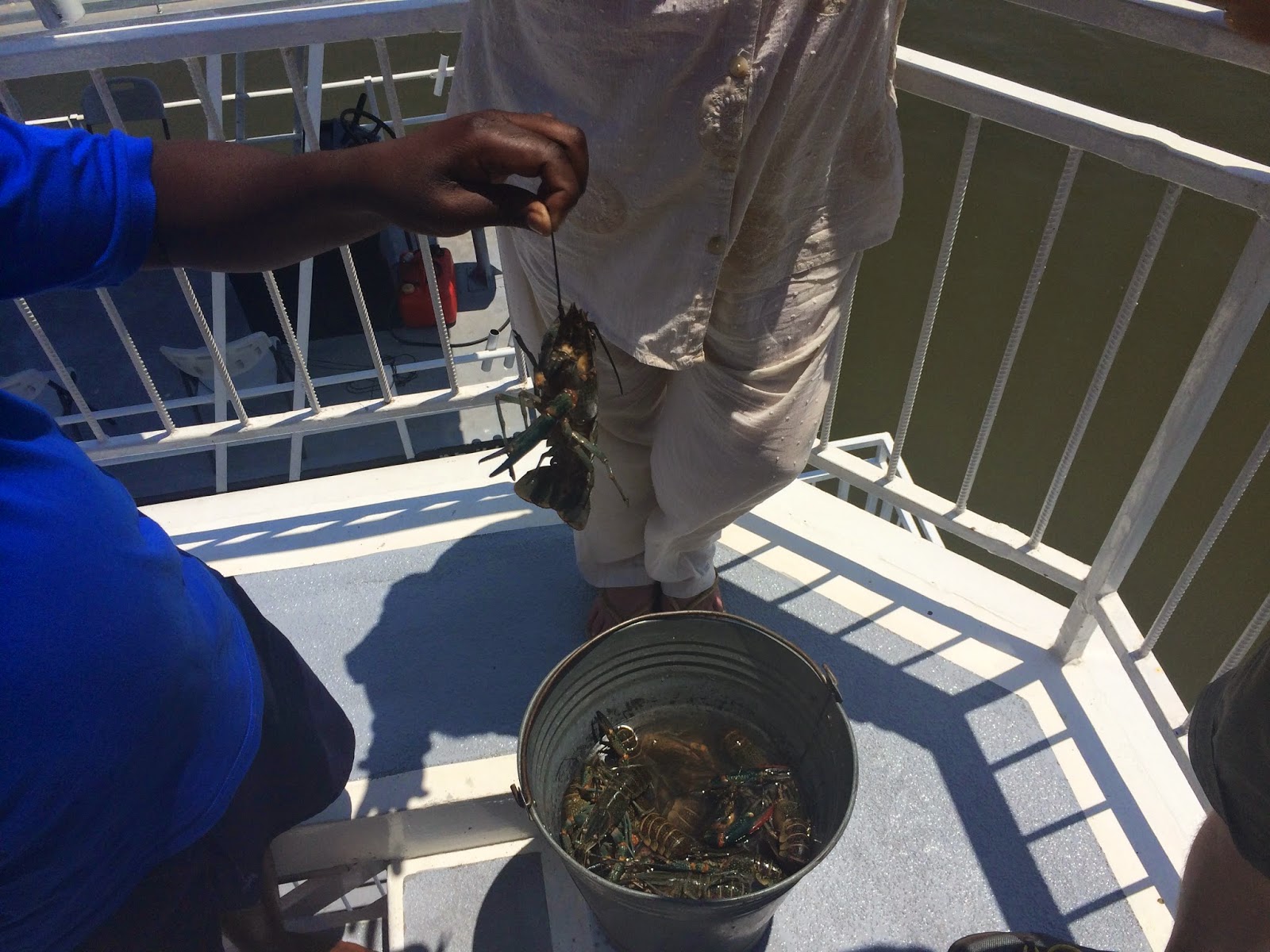 SWIMMING WITH CROCODILES (BY ACCIDENT)

Crocodiles generally stick around the shores of Lake Kariba. In fact for a croc to roll you, in needs to have its feet on the ground, which is why their kills usually happen in the shallows. So when we were told it was ‘very uncommon’ for crocodiles to swim to the middle of the lake, we wasted no time in changing into our swim wear and making the most of the cool, fresh water in the lake.

We all swam, jumped off the boat and had a great time cooling off in the middle of the lake.

It wasn’t until we were on land the next day when a local guide at Rhino Safari Camp told us that crocodiles swim across the lake all the time.

If you Google ‘swimming lake Kariba’ you’ll notice most the pictures are of people swimming inside cages.

So whilst I’d recommend staying in the pool at the front of the Umbozha, I’m proud to say I’ve swam with crocodiles (technically & probably true) and survived to tell the story 🙂

Much of the success of a houseboat relies heavily on the crew, and this houseboat has a few characters that will keep you laughing until the sun goes down. Jan – head chef and also known as ‘sweetie’ (she doesn’t do names, so affectionately calls everyone sweetie darling) – is one of the key cogs on this boat, and besides having an amazing history with the lake, she also makes an amazing pickled / curried fish dish.

I cannot shout enough about the sunsets and sunrises in this part of the country. The sunsets over Lake Kariba are spectacular, with the flame-orange ball lighting up the sky every evening. 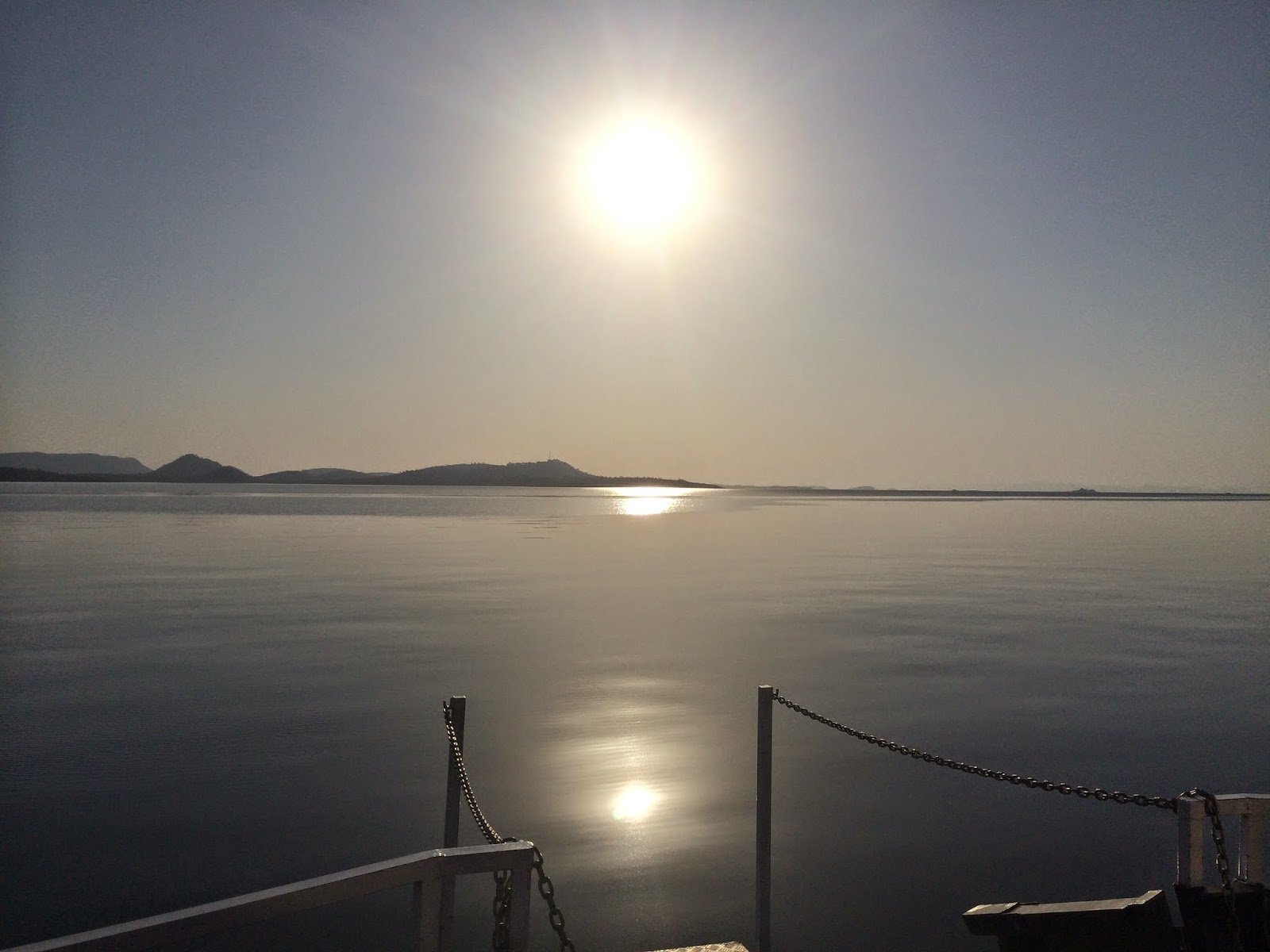 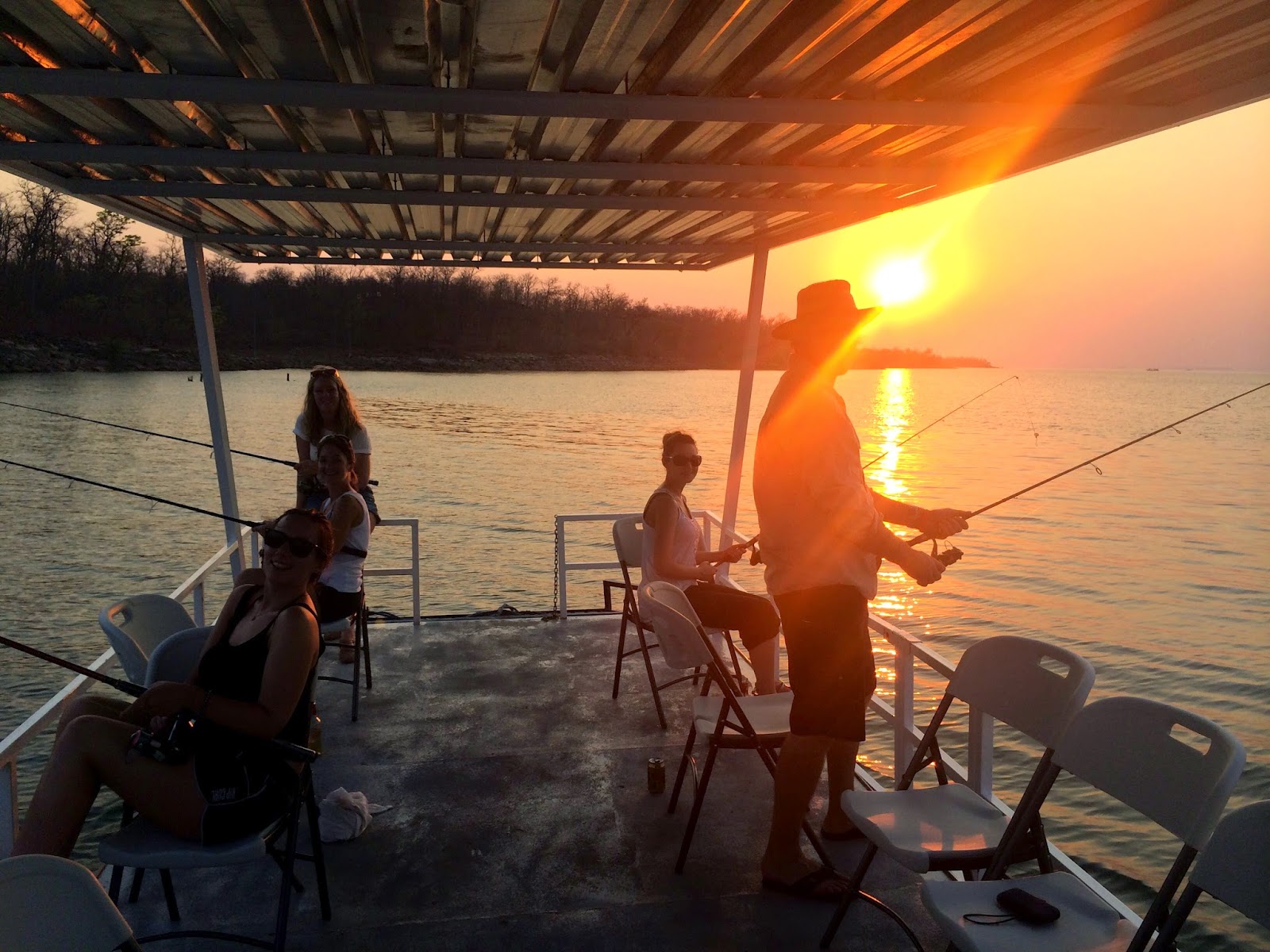 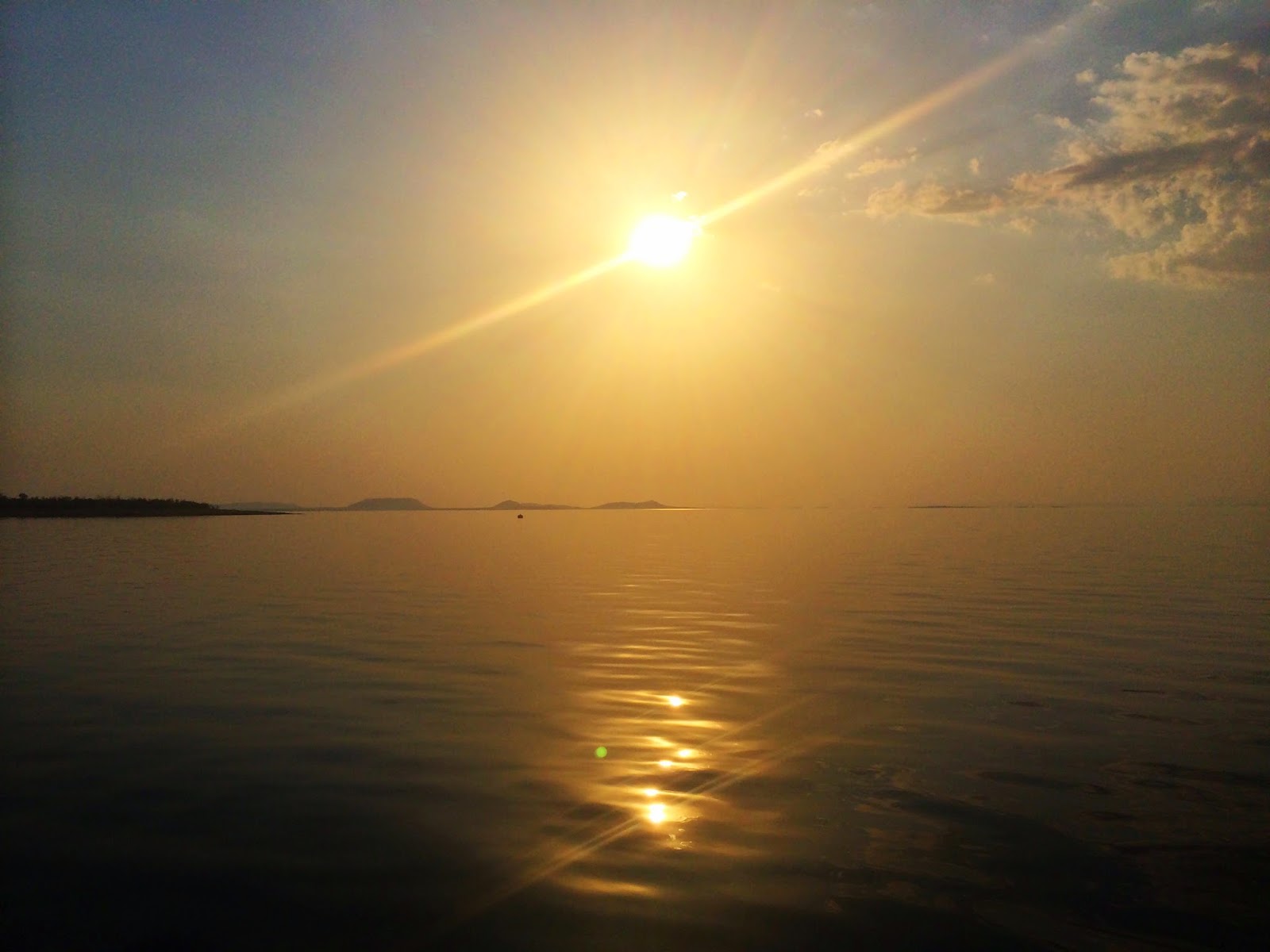 I was disappointed to hear that the majority of international travellers that come to Zimbabwe hop into Victoria Falls and out again, without exploring Lake Kariba or many of the other diverse areas of the country.

If you want to extend your trip from Victoria Falls, the Umbozha team can help with a 1/2 night stay, as well as transporting you along the lake.

Similarly, if you want to get from Kariba to Victoria Falls, Umbozha is a great, relaxing alternative to long tarmac roads.

For more information about Lake Kariba and the different accommodation and transport options, I would highly recommend checking out WildZambezi.com.

All the footage for my travel vlogs in Zimbabwe were captured using my GoPro. Lake Kariba was the first test of the waterproof housing, and as you’ll see from the video below, it survived and allowed me to capture our fantastic Umbozha experience 🙂