I’ve only been travelling for 3 weeks, but it feels more like 3 months. This is my second day of doing nothing, so I thought it was about time to catch up on a few blog posts and share some pics and stories with you from the journey so far.

Let’s start in Colombia. Prior to visiting Colombia, I was warned of how dangerous it was, and how my 5 month trip would only begin if I survive Colombia. My experience couldn´t have been further from the truth. For anyone travelling to South America, Colombia should be the first country on your list. The people are friendly, the food is nice, they love their salsa, and no trip would be complete without a generous dose of Aguadiente.

I was only in Bogota for 3 nights, but the days and nights were packed with activities. When I landed into the airport and grabbed a taxi to my hostel, the culture shock came thick and fast. Because of all the warnings about how unsafe taxis can be, I don´t think I took a breath until I reached the hostel. Looking back, the journey was safe, and the police presence is everywhere in Colombia, so I guess it was a case of adapting to a new country.

I landed in the evening, so was early to bed to try and reset my body clock. I stayed at the Masaya Hostel, located in the nice area of Candalaria. I would recommend it to anyone, as the staff are helpful, it’s in a great location, and you meet people from all over the world.

The next day I met a guy from New Jersey and a girl from Brazil and we decided to explore the city. We went to the police museum (who were particularly proud of their Pablo Escobar stories) and to the Botero museum. Botero is famed for making his paintings ´fat´, which makes looking round the museum a lot of fun.

The next day it was time to meet up with the group I would be travelling with for the coming 9 days, and we met at the foot of the Monserrate, a 3100m high mountain which provides incredible views over Bogota.

At the top, I was nothing short of amazed by the views. As expected, it was quite touristy at the top, with little stalls selling everything from ponchos and water to wooden willys and canelazo, a spiced cinammon rum drink (of course I tried it). It was also the first time I discovered coca leaves and coca tea, which all the locals consumed to alleviate altitude sickness problems. 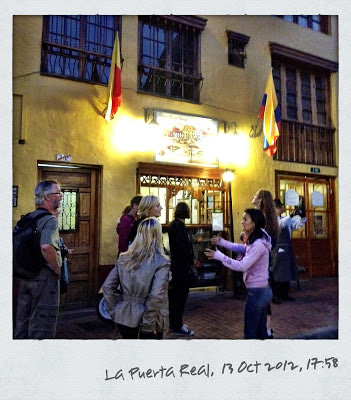 In the evening, we went to a relatively new restaurant in Candalaria, called La Puerta Real. The owners had created a museum within the restaurant, and gave us a tour of the pictures and artefacts before we sat down to eat. This was my first time to try ajiaco, a Colombian chicken and potato based soup, which was absolutely delicious.

Later that evening, all the group headed out for a few beers…which turned into a night of Aguadiente shots, salsa dancing and a 2am finish. It was my first taste of Colombian salsa, but it wouldn’t be the last…

I was in a group of 10 for the trip around Colombia, and only after 24 hours together, everyone got on really well, which would turn out to be the main ingredient for what would be a great trip round Colombia.
The next morning, we headed to the bus station, and boarded a WiFi enabled bus (yes, really – read more here) for what would turn out to be a 13 hour bus journey to Medellin.
Those 3 days in Bogota blew previous Colombian sterotypes out of the water. Those who had previously visited Colombia were right – you have to visit to appreciate what an amazing place it is.
2nd November 2012/2 Comments/by Simon Heyes
https://adventurebagging.co.uk/wp-content/uploads/2012/11/bogota-monserrate-view-candalaria.jpg 1536 2048 Simon Heyes https://adventurebagging.co.uk/wp-content/uploads/2018/10/Adventure-Bagging-Travel-Blog-WP.svg Simon Heyes2012-11-02 19:14:002018-06-10 15:02:13A Quick Trip Round Bogota, Colombia
2 replies

Throwing Food In the Air And Catching It In Your Mouth