Medellin has a troubled past. In the 90’s Medellin was one of the most dangerous cities in the world, and even up to 10 years ago, it was riddled with crime, after trying to shake off the aftermath of the Escobar drug cartel.

As such, my prior thoughts about Medellin were ones of serious reservations about safety. We arrived into the bus station late in the evening, after travelling for 13 hours from Bogota. That didn’t deter us from enjoying the evening. We headed to a bar and had our first taste of Medellin Añejo, a delicious local rum.

One drink turned into another drink, and we soon entered a flaming shots bar called Chupitos. Me being me, I was first in the queue.

A few tired legs headed back to the hotel, and 6 drink and salsa hungry bodies remained. That was me and 5 girls. Given that there were only 2 men on the trip, it was a running theme that I had become a ‘pimp’ for all the girls that stayed out. We headed to another bar and danced and drank with locals, who were only too keen to dance and drink with us. The salsa died at 3am, and we headed for bed.

The next morning, we took the metro to the centre of Medellin and walked around. We saw damaged Botero statues from the last car bomb to hit San Antonia Place, back in 1995. Pablo Escobar’s fight with the government was brutal, and his bounty-paying for the public to kill police men and women was something the Colombian government couldn’t even control.

It was a shock to the system to learn how dangerous Medellin was, but also how far the city had come in a short time.

We strolled around the city, and stayed around the main Plaza Botero. Apparently it’s good luck to touch all of the 24 statues. It was a hot day, but we rose to the task.

Fernando Botero was born in Medellin in 1932 and has since become famous across the world for his ‘larger than life’ paintings, drawings and sculptures. In Medellin his work is everywhere, so it seemed fitting I visited another Boteo museum to see more of his work.

Shortly after, we ended up in one of the main parks, and I had my first cafe tinto. It is a black, but naturally sweet coffee which was absolutely amazing, and would lead me to seek out more cafe tintos across Colombia.

That afternoon, our guide took us to one of the favelas in the mountains, called Santa Domingo. We took a cable car (essentially a ski lift without the skis) to the top, and began exploring a very different community to that of central Medellin.

The people were poor, but always had a smile on their face. Not once did I feel unsafe. We strolled the streets, had lunch, and took in the views over Medellin, before heading back to the hotel to cook local food, including coconut rice and garlic and chilli infused shrimp. Later that evening, salsa was once again top of the agenda, so 4 of us made our way to the main nightlife area of Medellin and created our own little party…and so began my first of many salsa lessons from the Swiss girl amongst the group.

The next morning, we were again up early to take a bus to El Peñól. This little town has an interesting past, with the old El Peñól flooded (you can now only see the cross from the church remaining) and a new El Peñól built to rehouse all the people. We met one of the first local men to move to the new El Peñól, and he wished us well looking round the new town.

I was amazed to hear that the reservoir that covered old El Peñól and covers a fast area powers 30% of all Colombia! We also saw a little submarine cast to the sides of all the boats. This submarine was used by Pablo Escobar when he was in hiding.

The next bus stop was at La Piedra del Peñól, a huge natural rock (second in size only behind Ayres Rock) which we were tasked to climb. After 740 steps, the views from the top were breathtaking (despite the rain)

After a beer at the top, we made our way down and onto the pretty town of Guatapé. All the houses in Guatapé have their own colours and drawings on the front of houses (called zócalos), to represent a special item or location to each homeowner. It was great to wander the streets, ponder whether I could live in such a remote place and dodge the tuk-tuks on the way to lunch.

Just before dinner, I took the first photo of the group. Here they are enjoying Aguila and Club Colombia!

For lunch I tried my first bandeja paisa, a local dish which wasn’t too dissimilar to an English fry up…just with different ingredients, see! 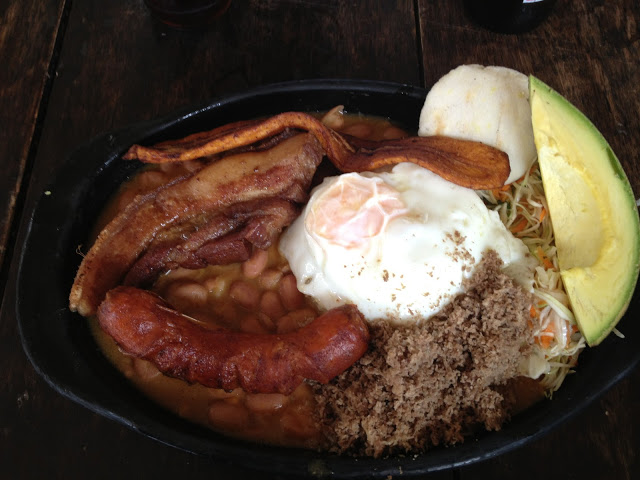 Ok, so British fry ups don’t include avocado, minced beef or plantain. Still, it was tasty!

Later that evening, we once again ventured out into Medellin, and danced the night away at various bars, to various salsa songs. Who would have thought I’d enjoy salsa so much?! Even more so when I was complimented on my salsa dancing by a local Colombian girl 🙂

We made it home safely, and rested tired heads and legs for the last leg of the tour – Tayrona National Park and Cartagena.

A Quick Trip Round Bogota, Colombia