If you’re thinking about visiting Sri Lanka, but aren’t really sure where to start to see the main highlights the country has to offer, fear not, I’ve got the perfect one week itinerary for you.

Update! Check out the accompanying video at the bottom of this post, which provider more information on how to spend one week in Sri Lanka!

I visited Sri Lanka on my honeymoon in 2017, and had a total of 8 days on the ground, covering all the popular food, historical, cultural and scenic sights of the Indian Ocean island.

I’ve plotted the route on the map below, so hopefully that will help give you an idea of the route and itinerary I’ve chosen.

Flights to Sri Lanka from the UK take around 12 hours, so it’s worth bearing in mind those miles and hours will take their toll. We landed at Colombo airport and took a short drive North to Negombo, and checked into our hotel. Technically we lost a day, but I would recommend recuperating, rather than taking a 4 – 5 hour drive on the same day you land.

We stayed at the Jetwing Beach hotel in Negombo.

The following morning we left the hotel after breakfast and heading North East, into Sri Lanka’s ‘cultural triangle’. The journey from Negombo to our base in Habarana took 3 hours, but can take longer if you travel around lunchtime.

Habarana is a fairly small town, but is a brilliant base for exploring the cultural triangle, as it’s bang smack in the centre. We stayed at the Cinnamon Lodge Hotel in Habarana.

You can do any of the following tours in any order, but as a rough guide, climbing Sigiriya rock took us 4 hours in total, visiting the Dambulla cave temples took 2 hours in total, and I would suggest giving yourself a full morning or afternoon for a safari in Minneriya National Park.

We were on honeymoon, so gave ourselves 3-nights in Habarana, but you can easily cover all the main sights in 2 full days.

One of the highlights of our one week trip to Sri Lanka was climbing the ancient rock fortress and water gardens of Sigiriya Rock. Aside from the stunning 360 degree views at the top, it is also great to learn about the history of Sigiriya, and the impressive underground water engineering – built hundreds of years ago, but still pumps water up to a lake onto the top of the rock – nearly 200m high.

The climb up the rock is quite simple, and you don’t have to be super fit to reach the top. There are a series of simple staircases up to the top, with various places to stop and take a breather. 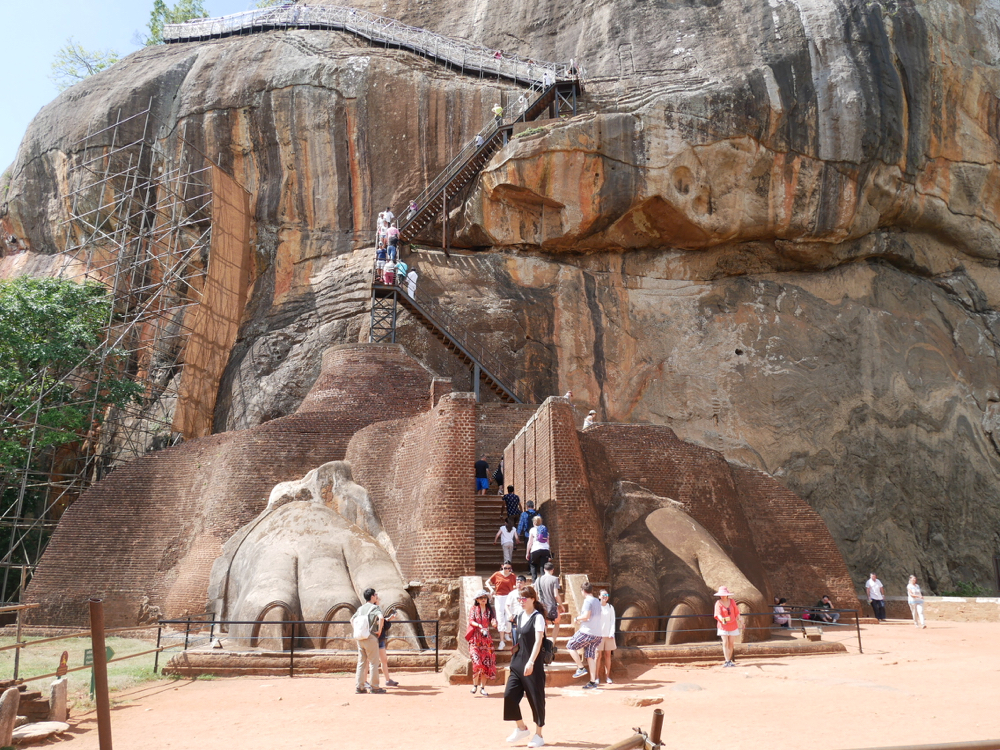 Buddhism is a common theme of many of the historical sites in Sri Lanka, and no more so is this noticable than at the Dambulla cave temples in the centre of the country. Comprising three rooms filled with 153 Buddha statues and natural paint murals covering an area of almost 2,100 square metres, it is an impressive sight to behold, and one of the best preserved historical sites in Sri Lanka. 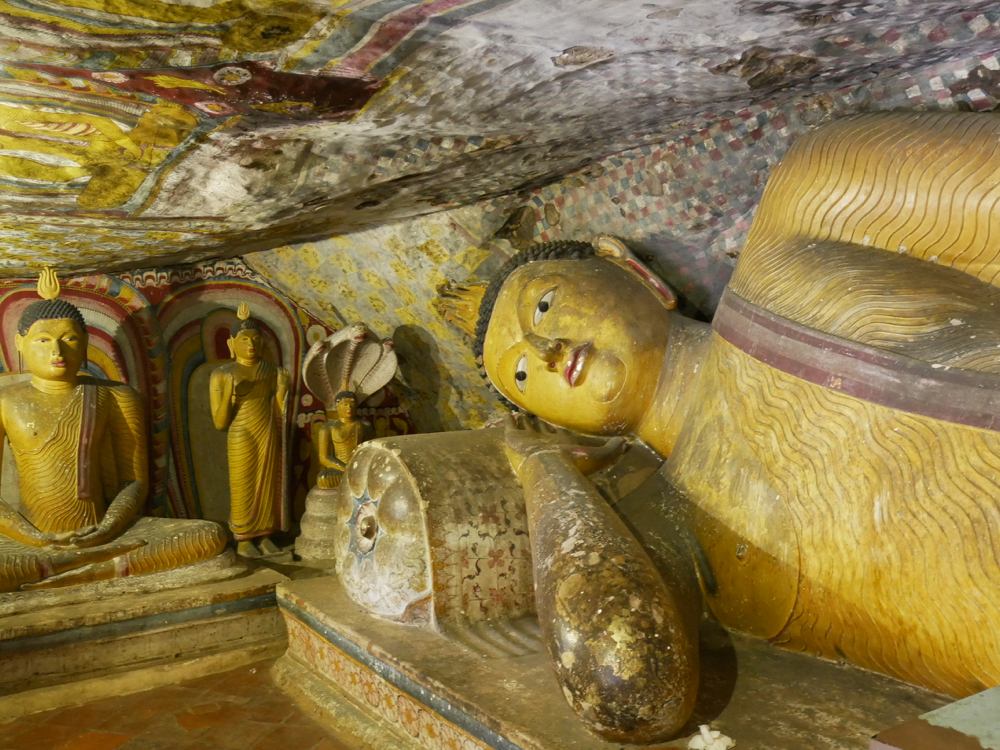 A 30 minute drive from Habarana is the vast Minneriya National Park. Whilst it doesn’t have the vast amount of wildlife as Yala National Park, there are still plenty of elephants, deer crocodiles and bird life to keep you happy. 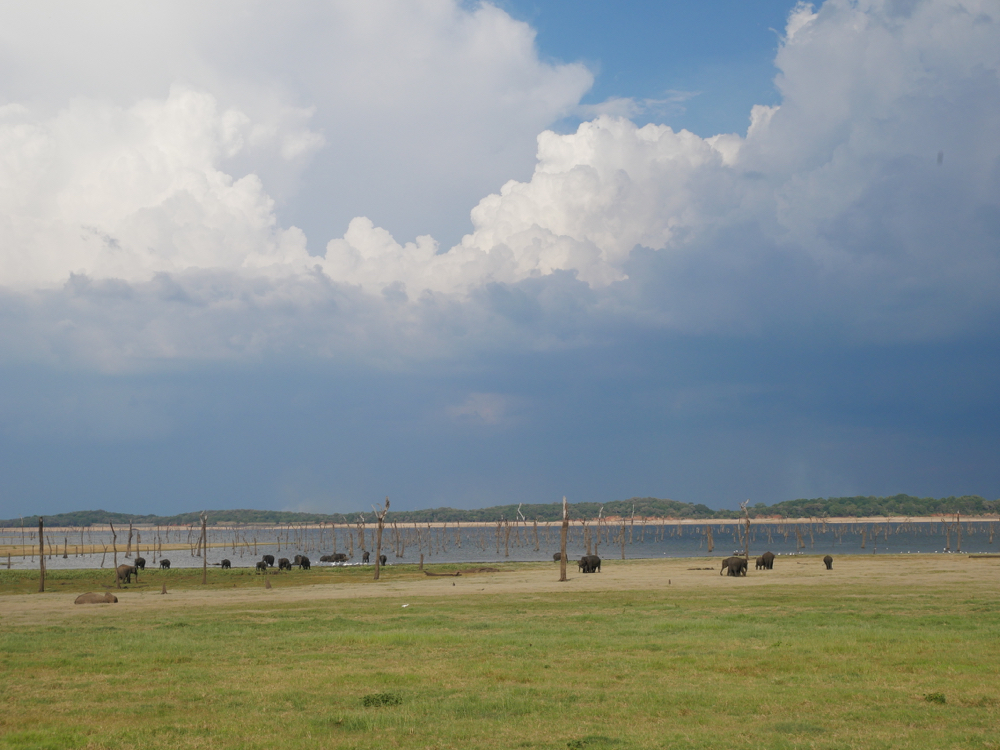 One of my favourite parts of our Sri Lanka week trip was a trip to a local village near Dambulla, where we learnt about traditional cooking. As well as helping out in the kitchen, we watched local village women make different Sri Lankan foods, from spicy coconut sambal through to dhal curries.

I try and organise a village tour wherever I travel to in the world, as it gives you a fantastic glimpse of real life in the country, and some of the traditional ways of cooking, farming and family life. Definitely try and fit this in your itinerary, if you can. 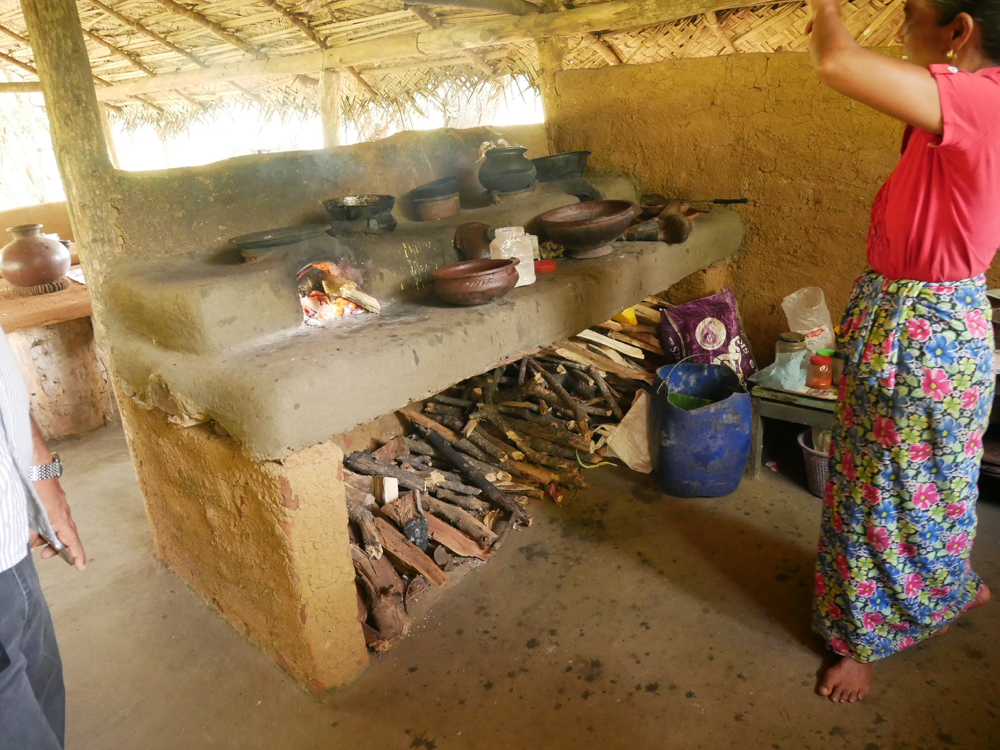 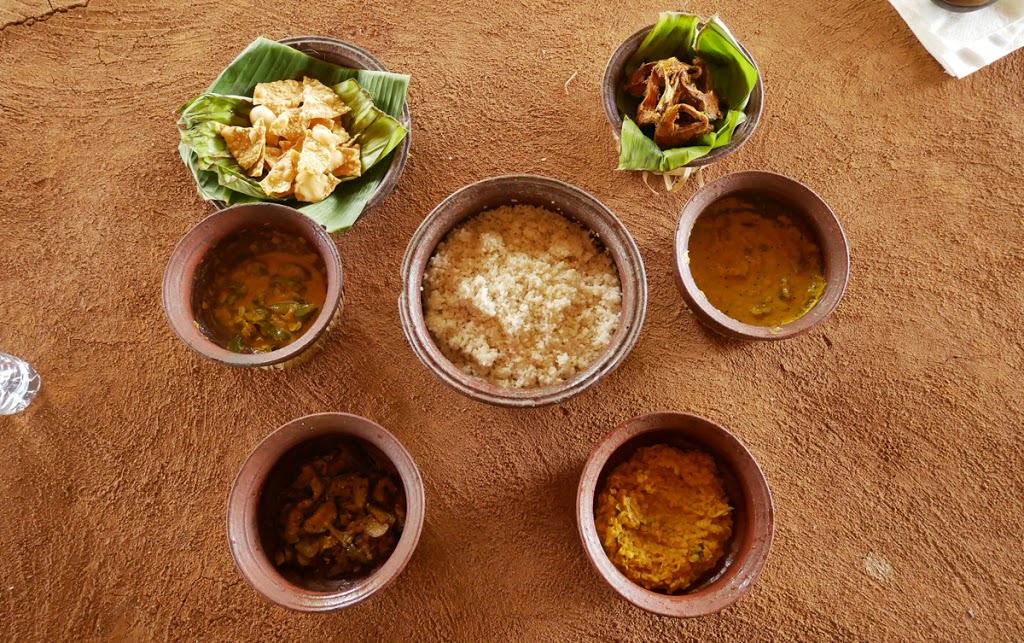 Polonnaruwa was the second capital city of Sri Lanka, and its main archaeological site is filled with hundreds of ancient structures – from tombs and temples, to stupas and statues. You can also explore the old Parliament building ruins. 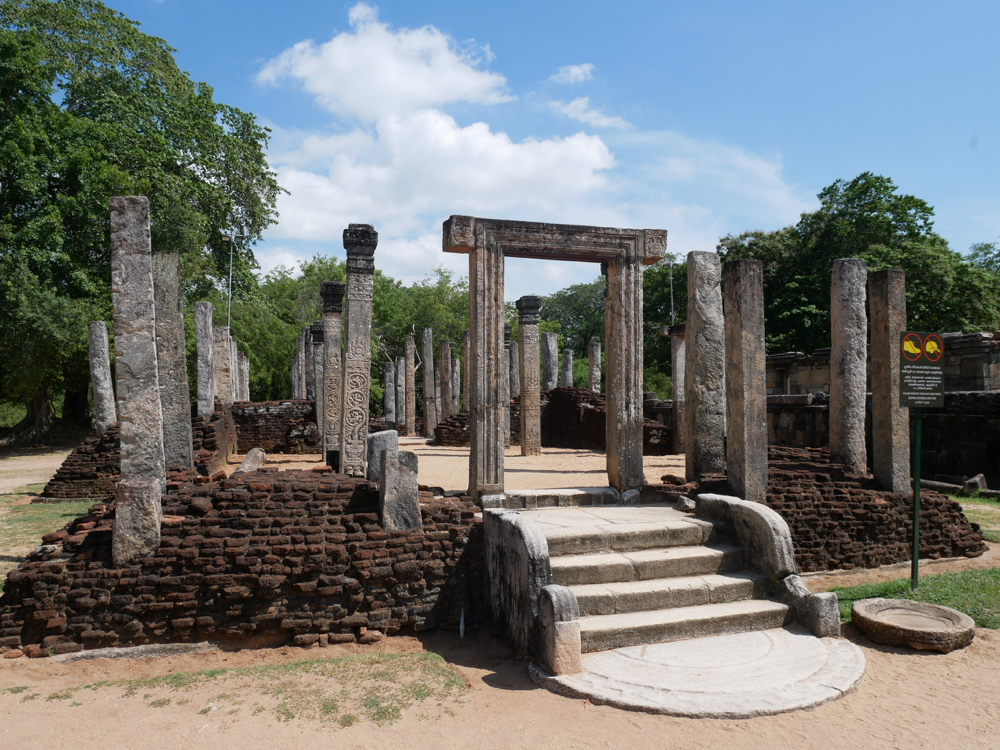 A further 3 hour drive South saw us arrive is the riverside city of Kandy, Sri Lanka’s second largest city. We stayed at the impressive Cinnamon Citadel Hotel in Kandy, which, perched by the riverside, provides striking views of the tropical forest over the river. 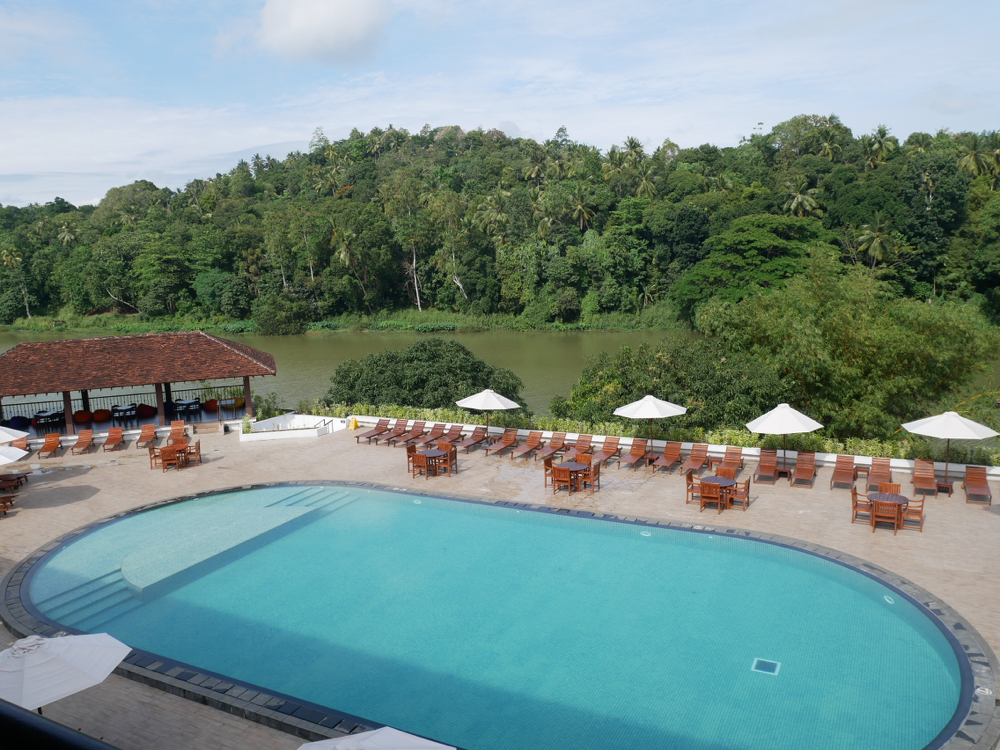 TEMPLE OF THE TOOTH

Perhaps Kandy’s most famous building (and encompassing feature) is the Temple of the Tooth, which, as the name suggests is the current resting place of the Buddha’s tooth relic. This tooth has quite the history, and has travelling more places around the country than some of Sri Lanka’s local inhabitants. I won’t go into too much detail, but the temple is well worth a visit. A grand structure from the outside, lit up at night, it is fascinating to look around, and learn about why people can queue for up to an hour to get a glimpse of the golden tooth casket. 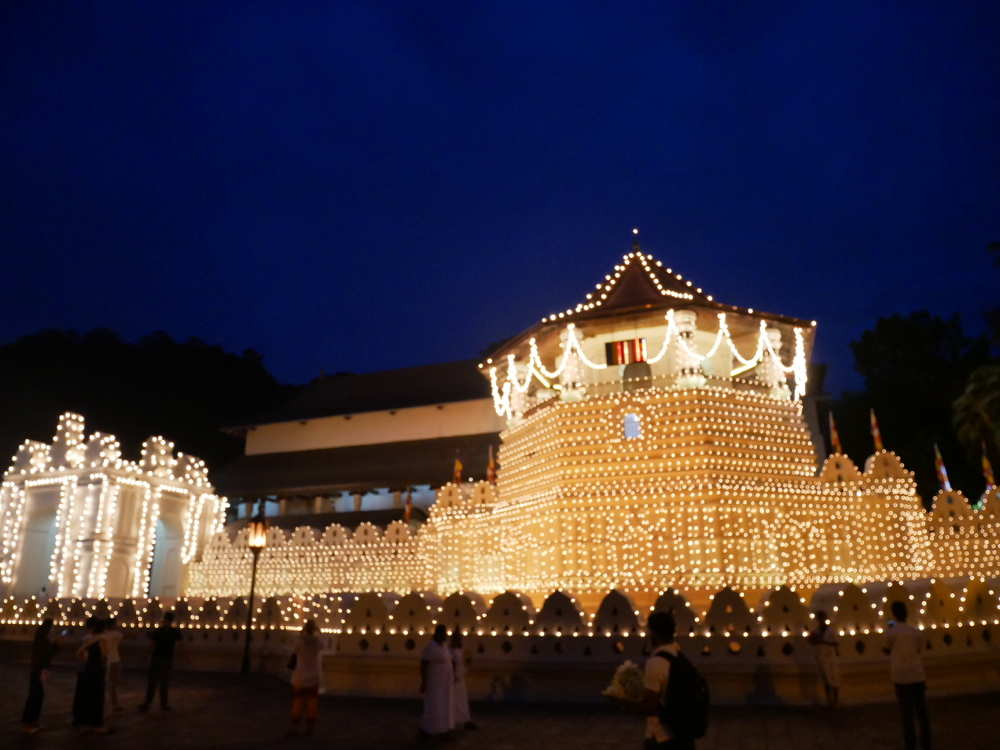 The Royal Botanical Gardens are closer to Peradeniya than Kandy, but it’s nice to drive around the city and see some of the markets and street stalls on the way to the botanical gardens. Once inside, give yourself a good 2 – 3 hours to look around, as the gardens are bigger than they seem.

It was incredibly hot the day we walked around, so make a note that there is a little shop which sells ice cream and lollies in the centre, perfect to help you cool down! Tickets cost around £5 for adults.

THE TRAIN FROM KANDY TO NUWARA ELIYA

On our final day in Kandy, we headed to Peradeniya and boarded the train to Nuwara Eliya (the closest train station is Nanu Oya, 5 miles down the hill). Much has been written of this incredible train journey, and believe me when I tell you it is one of the most stunning train journeys in the world.

The train journey to Nuwara Eliya takes you deep into tea plantation country, and the train snakes around the tea fields and hillsides, as well as skirting lush green valleys and waterfalls. It is simply stunning. 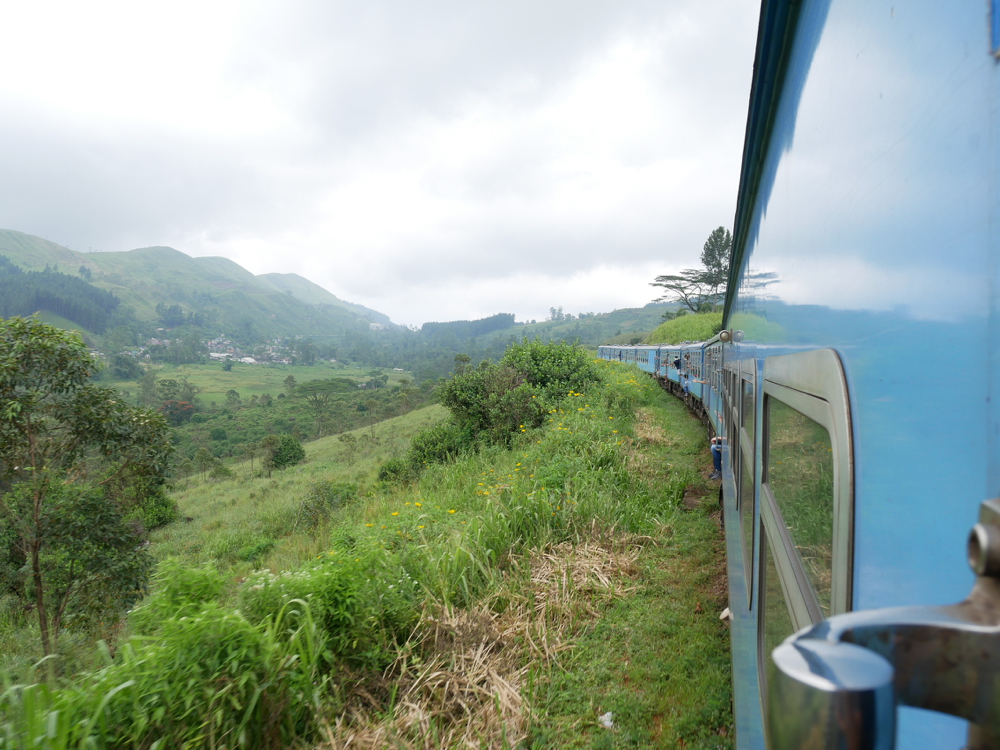 Most articles and guides will mention the train from Kandy to Ella. We didn’t go that far, getting off at Nuwara Eliya, the town known as ‘Little England’ thanks to its colonial roots. The main reason for this is that the drive from Nuwara Eliya to Colombo is close to 5 hours, whereas Ella to Colombo could take 6 – 7 hours. For the purposes of a one week itinerary, it makes more sense to keep the drive time to a minimum.

We stayed at the aptly-named Grand Hotel in Nuwara Eliya. With a large billiards room, piano room and grand wooden fascias, you could have been in a large Scottish hunting lodge, not a small town in the middle of Sri Lanka.

Founded in the 19th century by the British, Nuwara Eliya has a colonial charm, typified by the local post office, and many of the private homes and gardens.

In the town there is a racecourse, a golf club, a market and several restaurants. We were only there for a little over 24 hours, but still managed to try an Indian restaurant and 9-holes on the golf course 🙂

The final leg of our trip was the 5-hour drive back to Colombo. Depending on flight times, you could set of early and fly the same day, or do we what did and arrive, stay the night in a local hotel (we were in the Cinnamon Lakeside hotel this time), and then fly out first thing in the morning.

EXTENDING THE ITINERARY TO 10 DAYS

For those looking for a 10-day itinerary, I would highly recommend incorporating Yala National Park, down in the South East corner of the country, and the old fort town of Galle. Sadly we ran out of time to visit both of these places, but if I ever went back, both of these would be on the hit list.

You would probably need two nights in Yala (simply because it takes 2.5 hours to reach Yala from Ella, and 4 hours from Yala to Galle), and probably one night in Galle, before the 2.5 hour drive back to the airport.

There you have it – the ideal one week itinerary for Sri Lanka! If you’ve never visited Sri Lanka, you won’t be disappointed. The cricket-enthusiastic, curry-orientated, tuk-tuk-filled island gem is definitely worth a visit.

Age Is Just A Number
Scroll to top