There is no better feeling than flying down a mountain at 60km per hour, whilst taking in the fresh air and mountain views.

This year was my 14th year of skiing, and once again I loved every minute.

We took a 4 year break from ski chalet holidays due to travels and friends having apartments, so when we booked a last minute trip to La Plagne through Snowfinders, we couldn’t wait to get back into the chalet scene.

If you know where and how to look, chalet ski holidays are brilliant value. You get return flights, transfers, ski chalet accommodation, afternoon tea and cake, a 3-course meal for six out of seven nights, and free wine with the meal. This time around, we got all that for close to £550 per person.

THE JOYS OF MEET & GREET PARKING

Our flight from London Gatwick was at 6am, so we had to be at the airport for just before 4am.

That meant getting up at 3am to make the journey from leafy Hertfordshire. We usually park at the airport, but with so many different heavy bags, I was pretty chuffed when Purple Parking got in touch and asked if we would like to try out their meet and greet service for a review collaboration. It was perfect.

Drop the car right outside the terminal, and have someone drive and park it for the week. I couldn’t recommend the convenience enough – especially if you’re travelling with several ski bags!

La Plagne is not your average ski resort. It is split into many different ‘villages’ so has quite a fragmented feel, but each little village has it’s own collection of bars and restaurants, which ensures everyone is catered for.

Our chalet for the week was called Chalet Roussette, located in Plagne 1800 with Skiworld. We were directly opposite the 1800 ski lift too, which made it pretty much ski out! 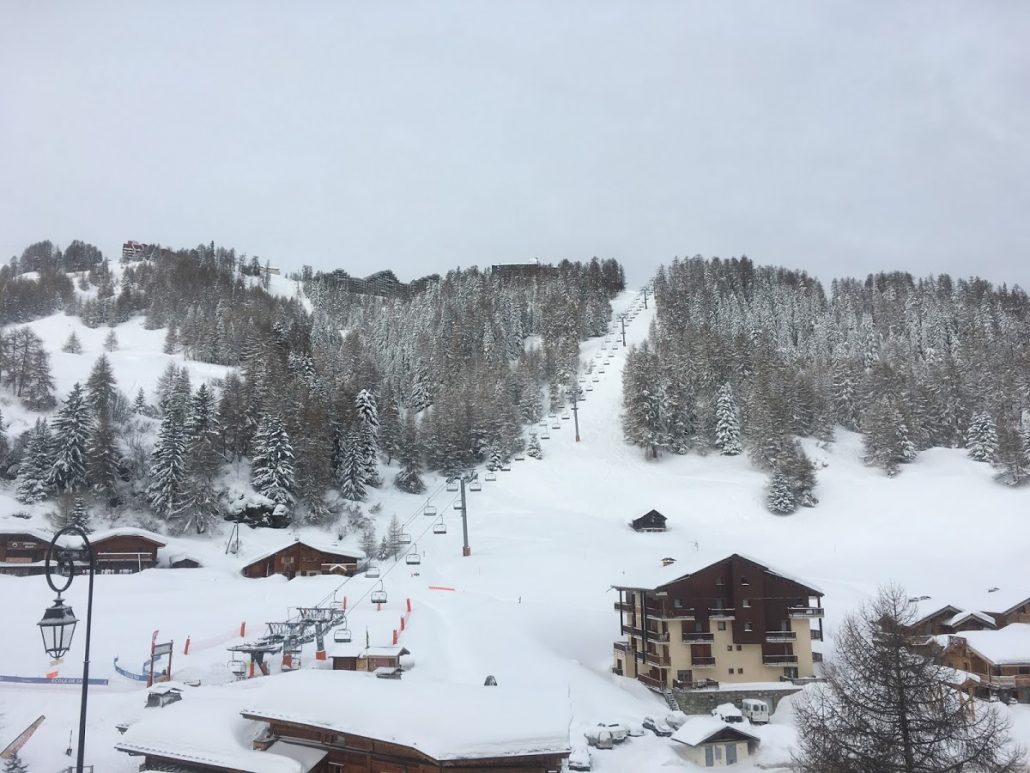 If you’re staying in Plagne 1800, check out the Bobsleigh Bar and Bar La Mine for apres ski, and La Cantine cooks up some fantastic dishes for lunch and dinner. There are also two ski rental shops, as well as a supermarket and cash machine higher up the hill.

In 2003, La Plagne became connected with the neighbouring resort of Les Arcs, which created the Paradiski piste area. Linked by the Vanoise Express – a double-decker cable car that can carry 200 people – the area provides 425km of piste. Check out the piste map – it’s a pretty vast area!

The second highest point in La Plagne is Roche De Mio. Situated at 2700m, it was here on the second day that our gondola broke through the low lying cloud, and presented up with blue skies above an amazing inversion. 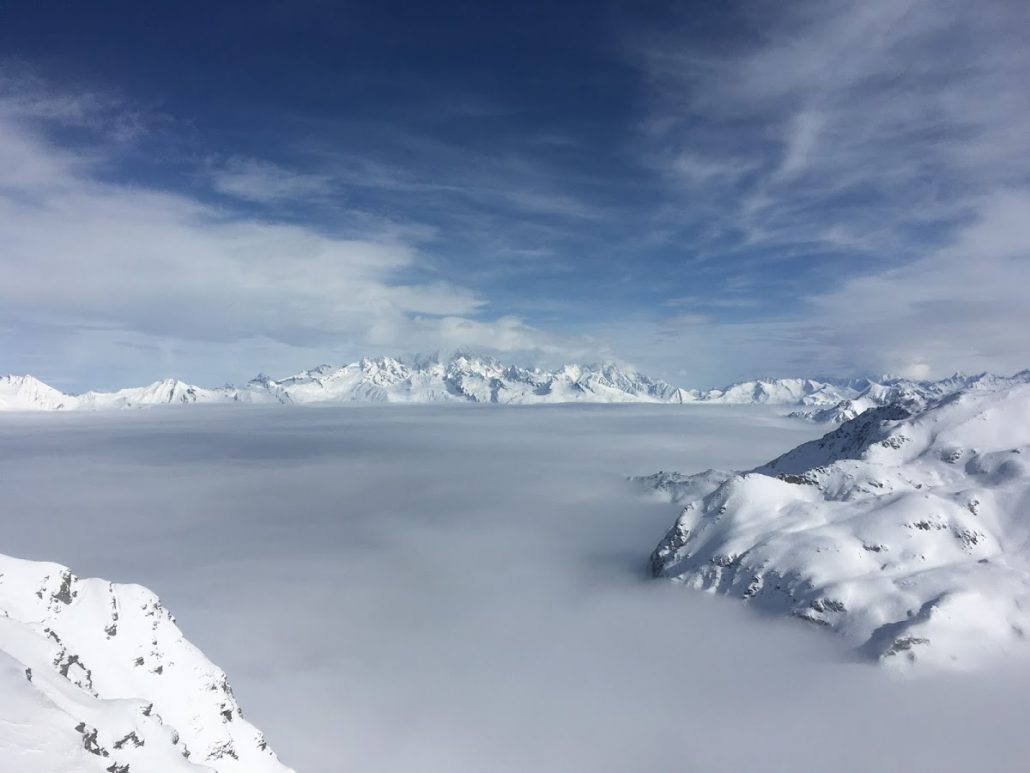 THE SNOW CONDITIONS IN LA PLAGNE

It had been snowing every day the week before we arrived, so there was plenty of snow on the ground during our ski week. In fact the first couple of days were superb – great piste conditions and blue skis, which made for some fantastic mountain pictures. 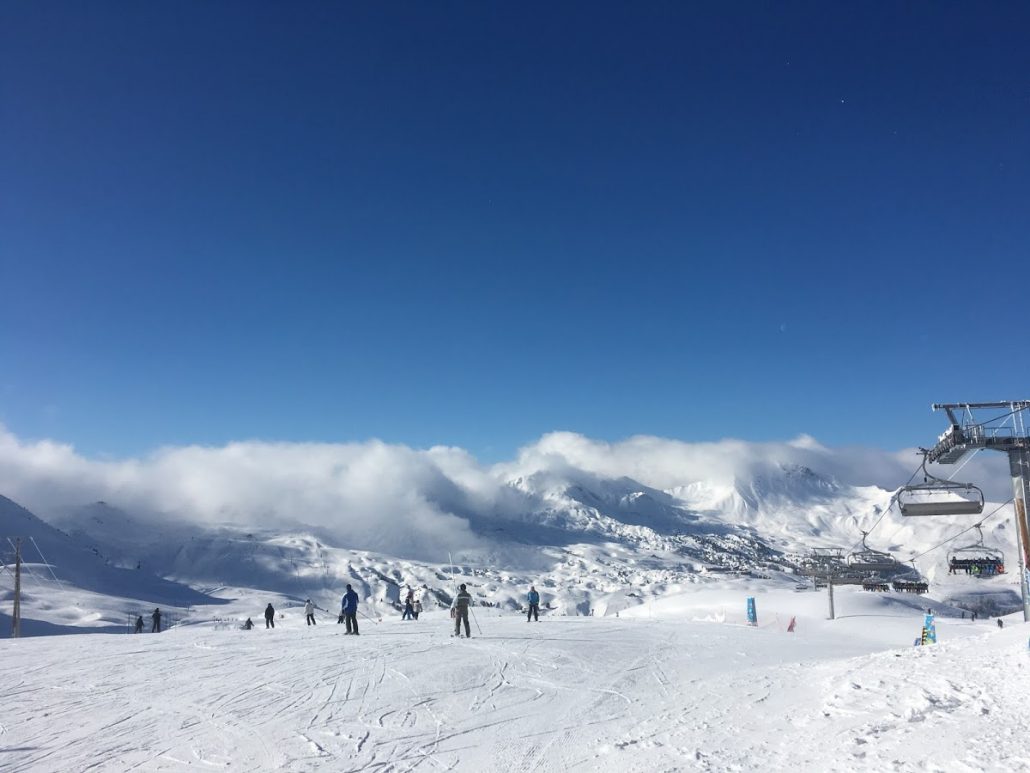 Even when the cloud covered the mountain like a blanket, the higher points of the mountain were still sun drenched. On one of the first afternoons we decided to stop for a rum-infused hot chocolate at Les Inversions restaurant, plonked ourselves down on some deckchairs and took in this view: 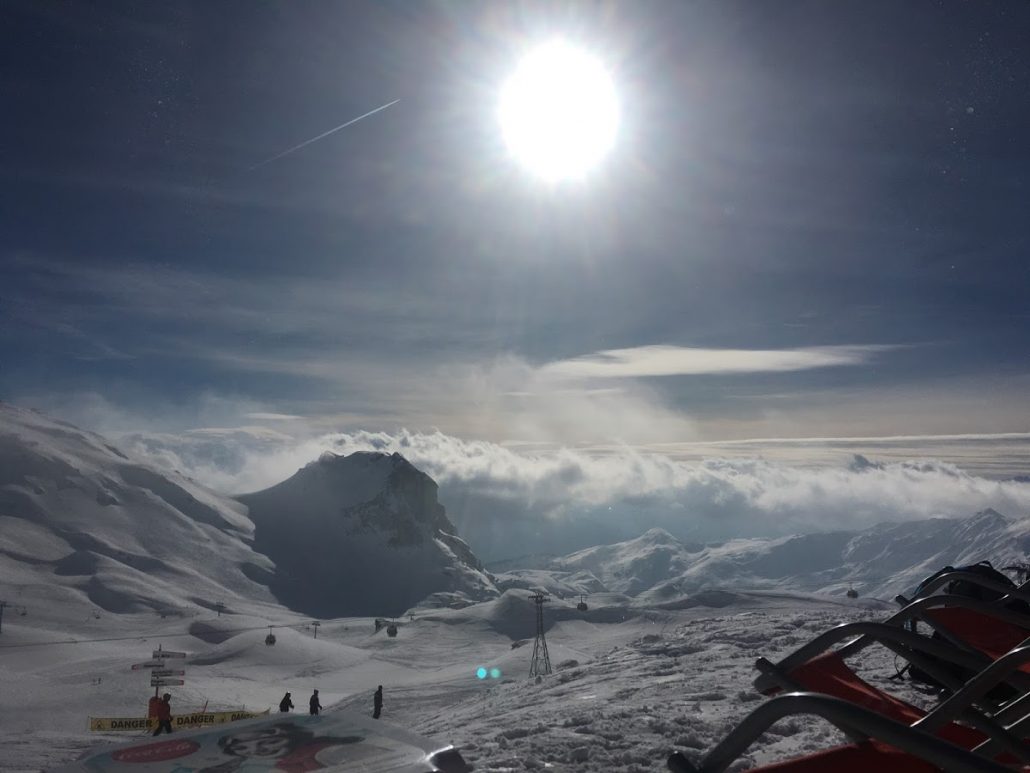 This year my younger brother joined us on the ski trip – it was his first time skiing, so he couldn’t have asked for better conditions. It was no surprise he picked it up so quickly! 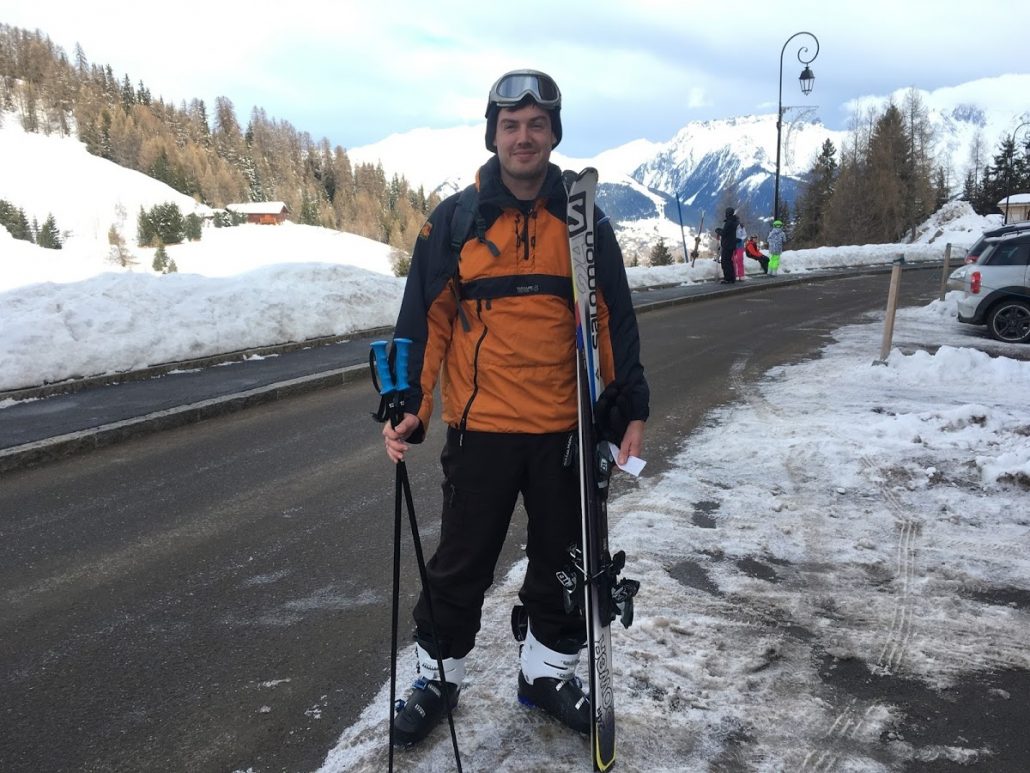 After the first couple of days, it began snowing. And then it became heavy snow. And it didn’t stop for 48 hours. So much so, we entered Bar La Mine when it started snowing, came out 2 hours later and the road had turned into a slope…so we skied back down the road to the chalet!

Then on the final day, we headed lower down to Champagny and took in some off-piste and Les Bols, a fantastic red run that winds down through the trees. Check out how nice the conditions were! 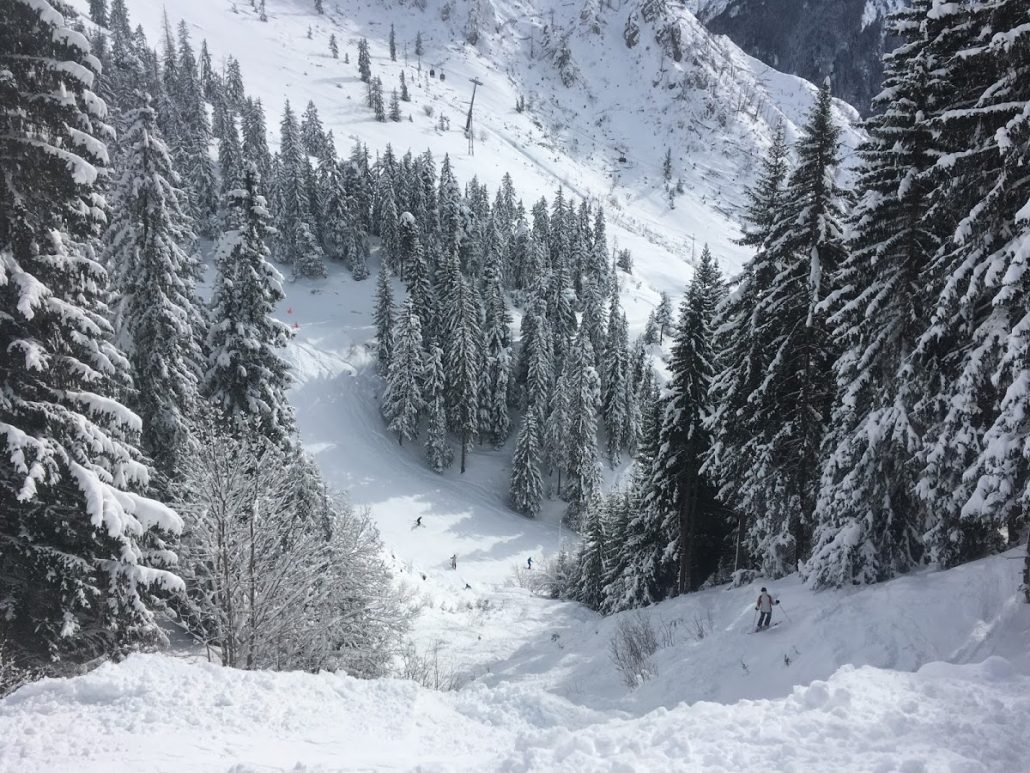 Warning – this pic will make you salivate… 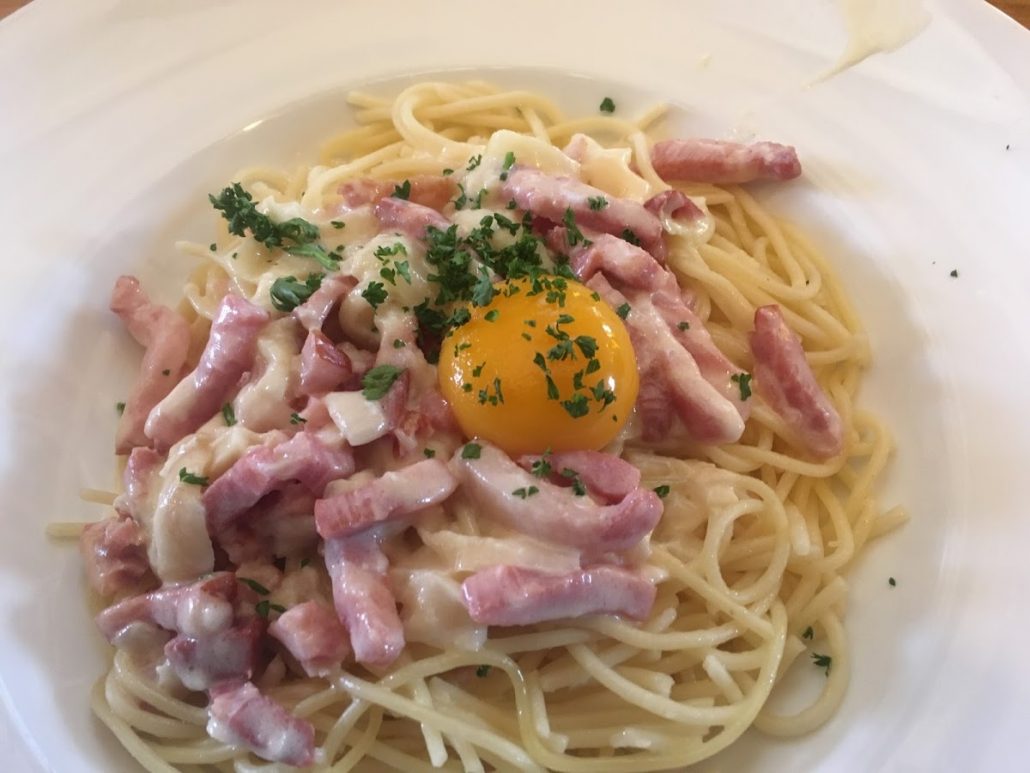 As it was my brothers first ski trip, it was only right we treated him to a fondue and hot rocks at L’Arlequin, located in Plagne Aime 2000. Cook your own meat, dip it into local French cheese. Yum! 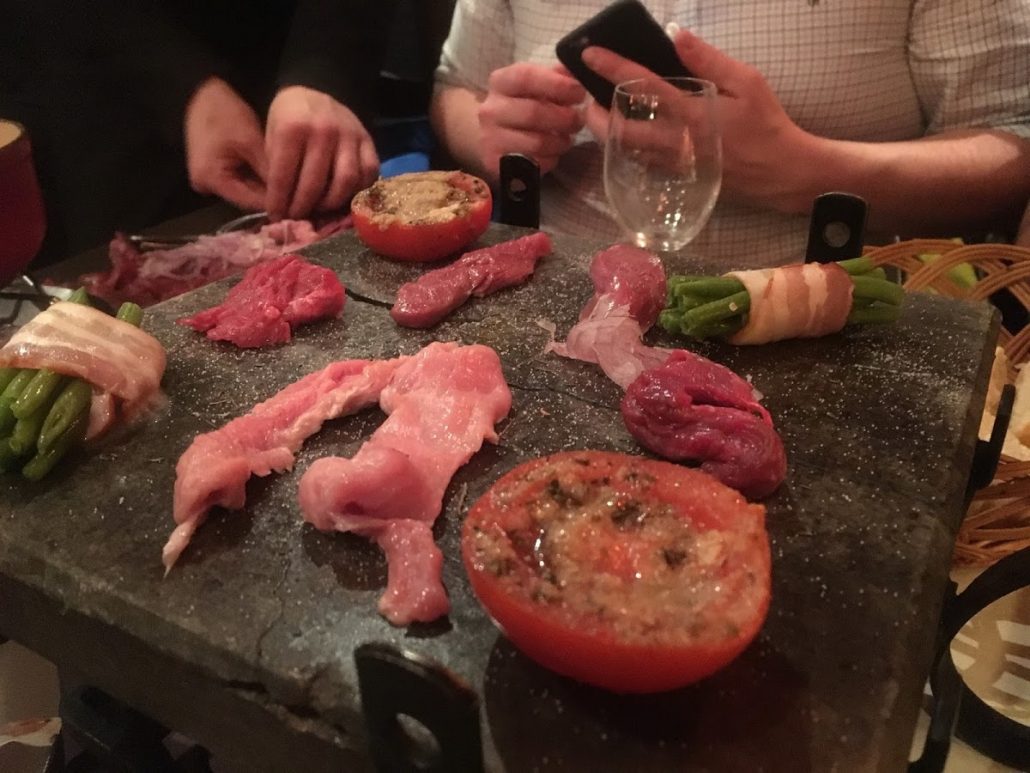 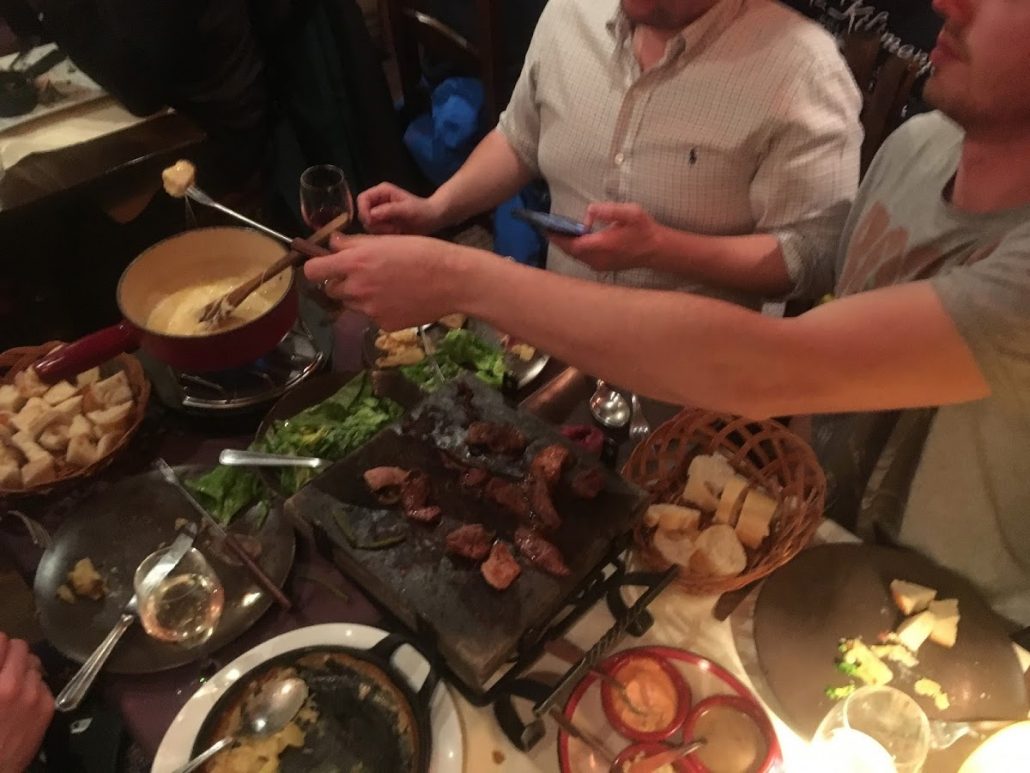 La Plagne is a unique ski resort. Not only does it comprise several different villages, it also has an Olympic bobsleigh run. The slalom run is one of only six in the world, so we didn’t need to be asked twice if we wanted to do it.

We donned our helmets and hurtled down the 1 minute run at 120km per hour, hitting g-force 4 on some of the bends! 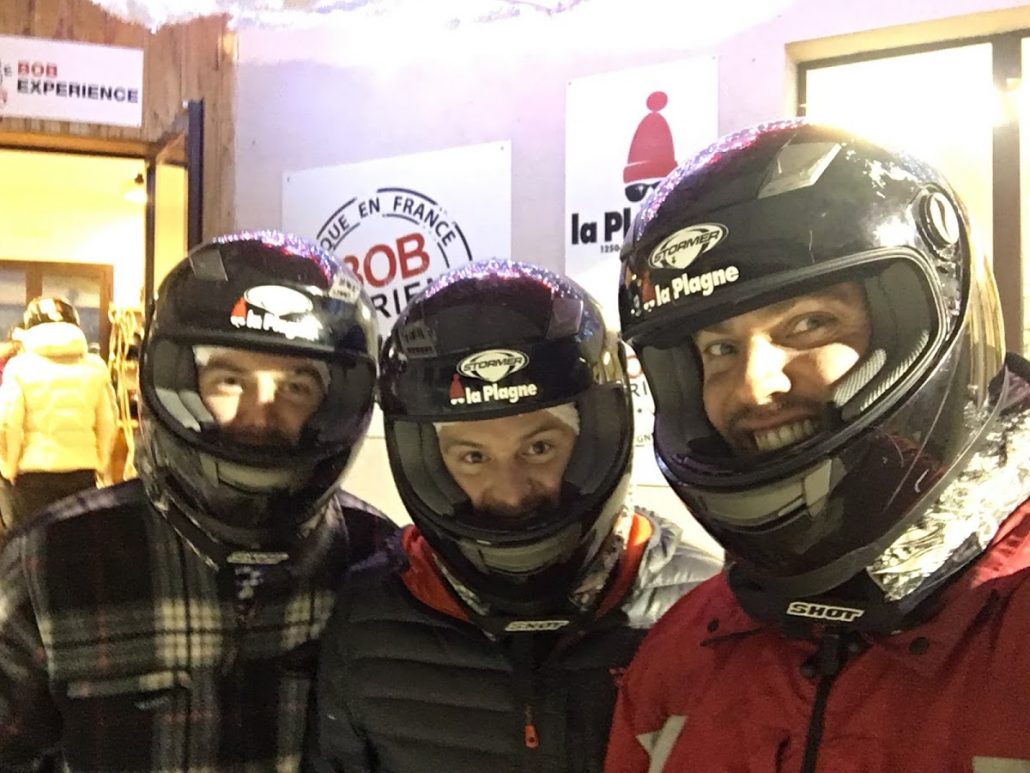 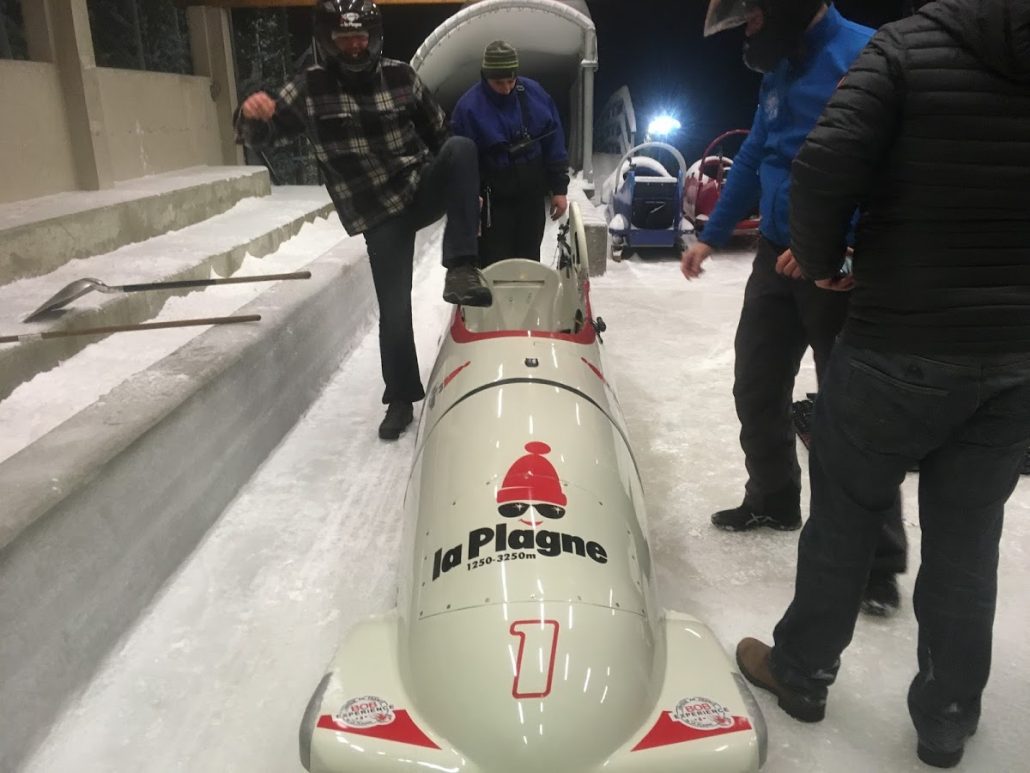 We had a fantastic week with Skiworld in La Plagne. We even had time for a few shots of Flugel and another rum-infused hot chocolate before heading home 🙂 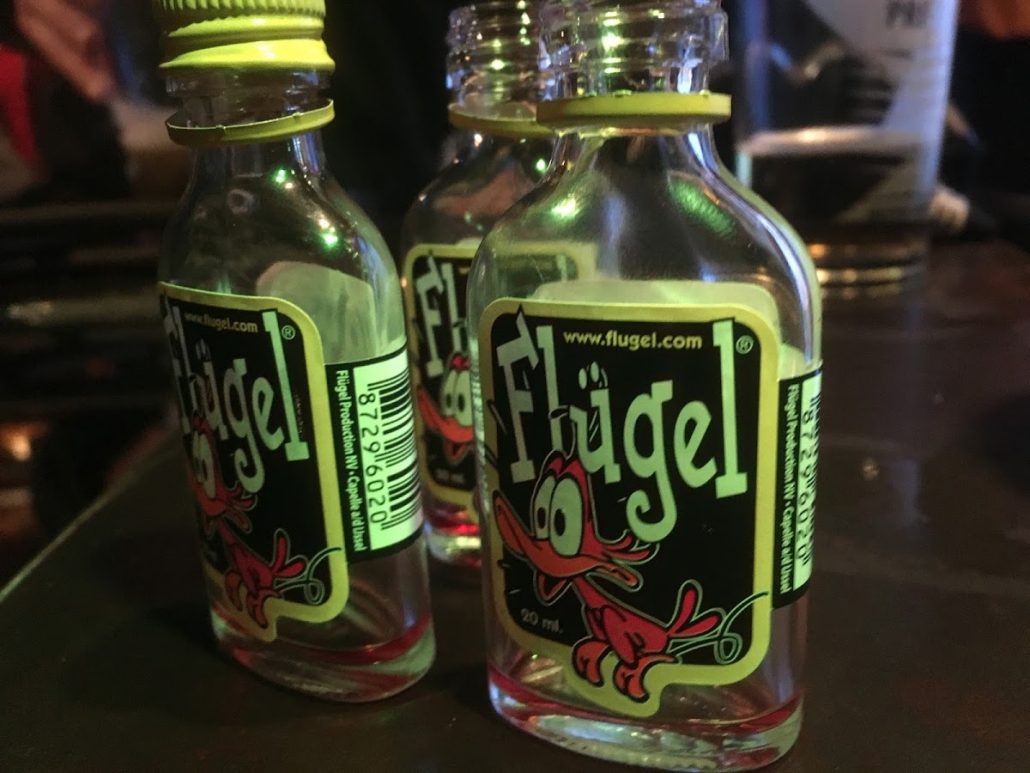 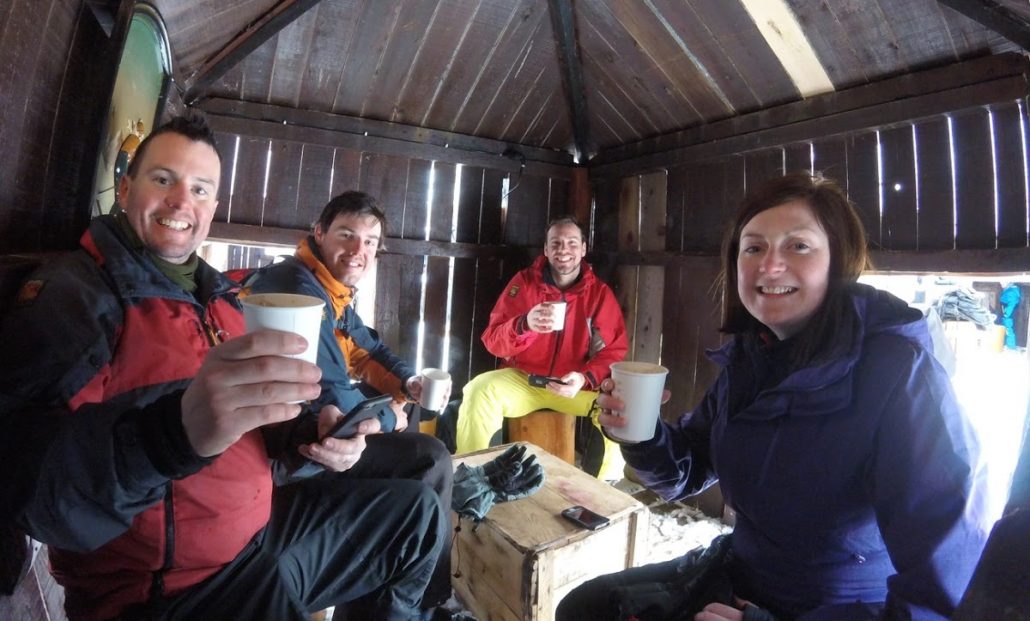 Until next year! Maybe a return to Tignes is finally on the cards…

If you’re skiing this season, enjoy the snow – there’s plenty of it 🙂