White water rafting has always been on my bucket list. For one reason or another, I’d always missed the opportunities to do it in other countries. The day before we arrived into sulphur smelling Rotorua, I found out I had another chance to go rafting. I wasn’t going to miss out again. 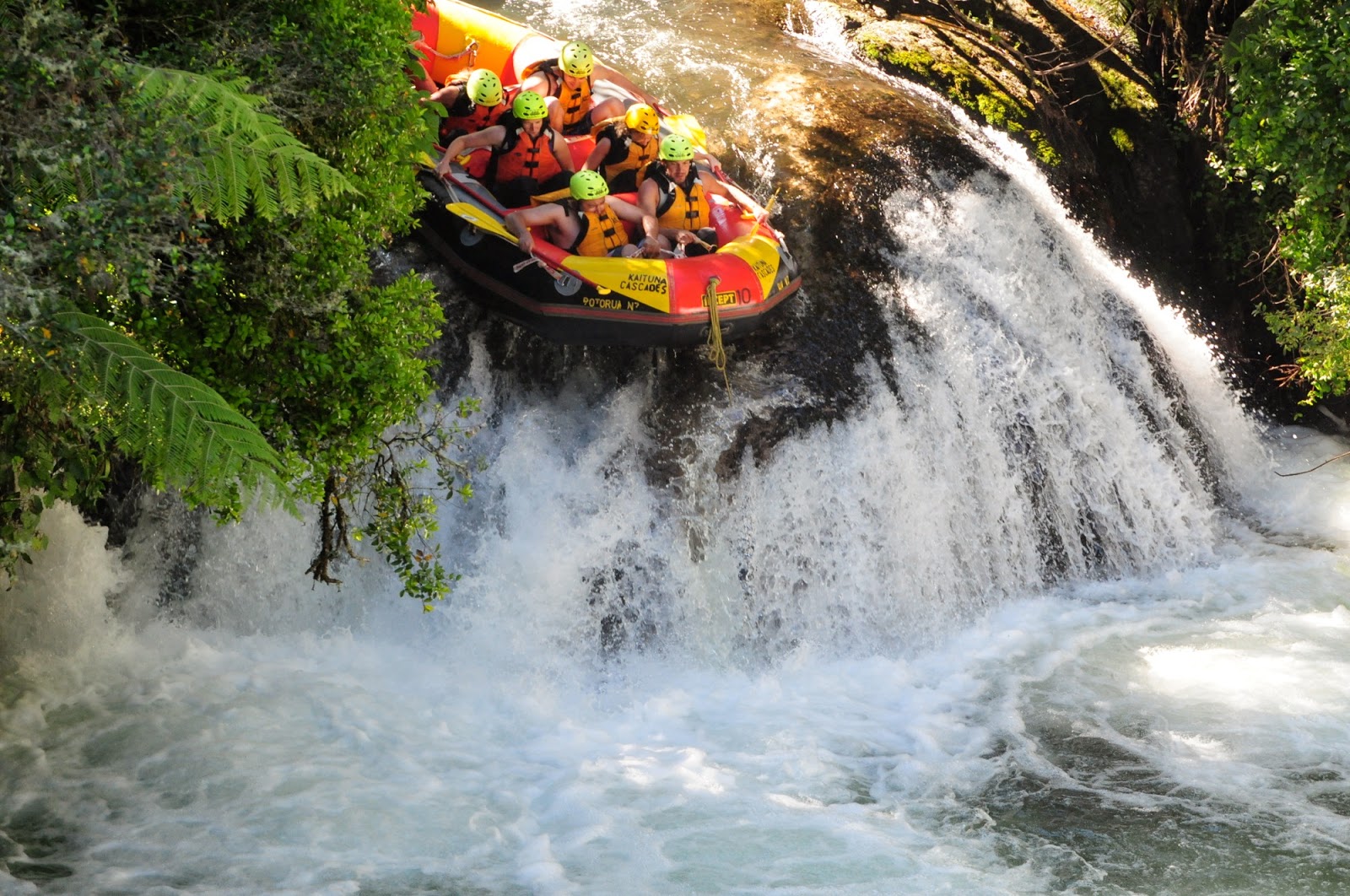 We met the Kaituna Cascades team outside their base in Rotorua. They were half way through blowing up the rafts outside their hangar base, so we were given a quick summary of the rafting morning by a tanned man with blond curly hair, who then told us to split into two groups.

The man continued: “No? Well now you do! How big is the world’s highest commercially rafted waterfall? About twice as high as our hangar here, or 7 metres”

That was high. Very high. The tanned man with blond curly hair had got my attention.

I could sense there were a few nerves in the group, but if skydiving taught me one thing, it was to embrace any fear you have.

We were given a further safety briefing, told how to paddle in unison, and told how to sit in the raft. We slipped into our flattering black wetsuits, clipped on our lifejackets, had a quick team picture, and headed for the river. 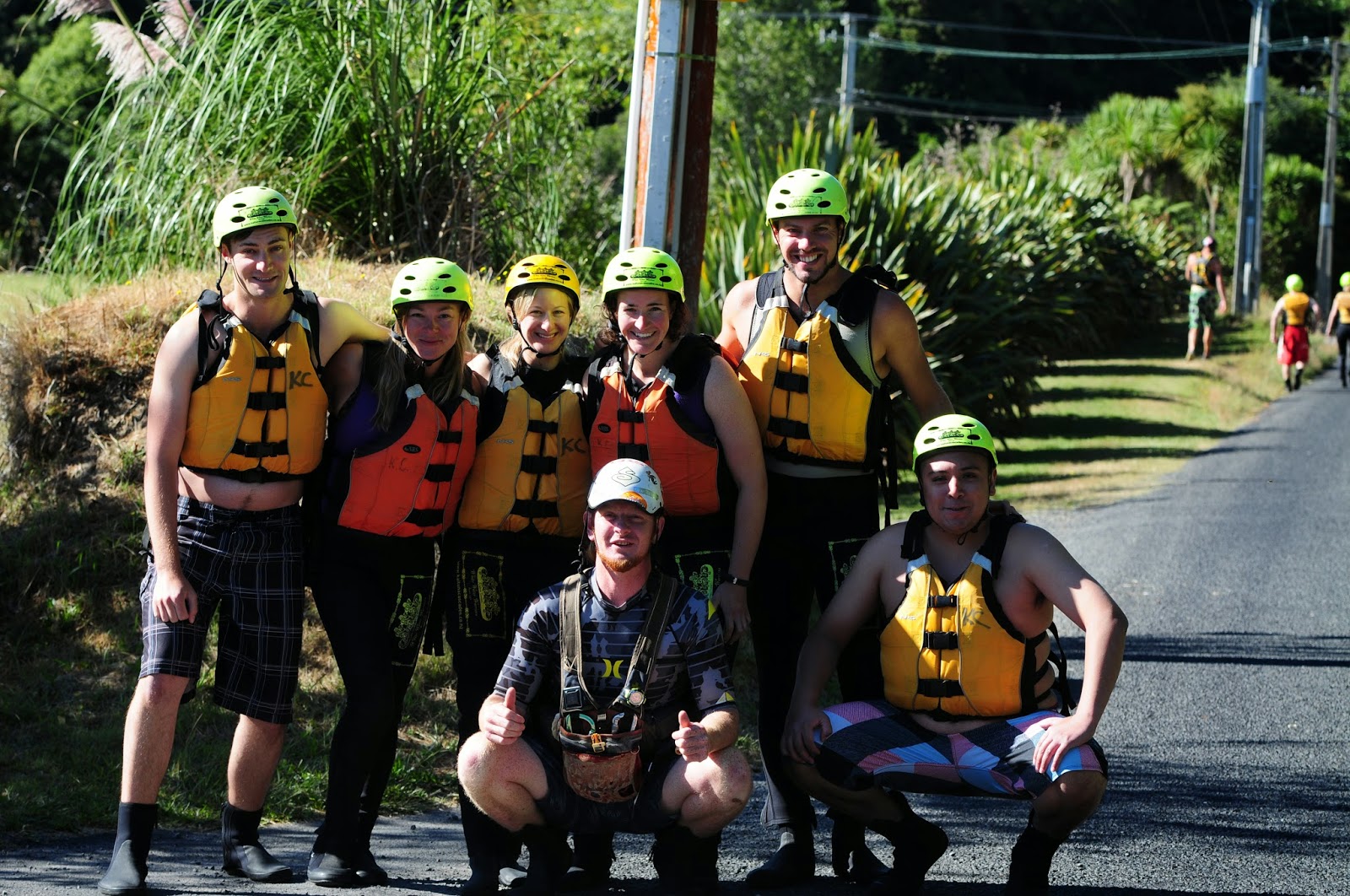 We carried the raft down the road, to the point where the we entered the river. The guides and crew put the rafts onto the river, and one by one, we jumped in. For steering purposes the strongest people need to be at the front of the raft, so in a group mainly made up of girls, myself and a friend from Chile took the helm.

At this point my adrenaline level reached a 6 out of 10. The roar of the river sent the heart pumping, and the excitement and eagerness on the team’s faces added to the anticipation of rafting a 7m waterfall.

We sailed down a couple of bumps, paddling forwards in unison, then backwards, spinning down the river, bumping into rocks and trees at the side. This was fun! 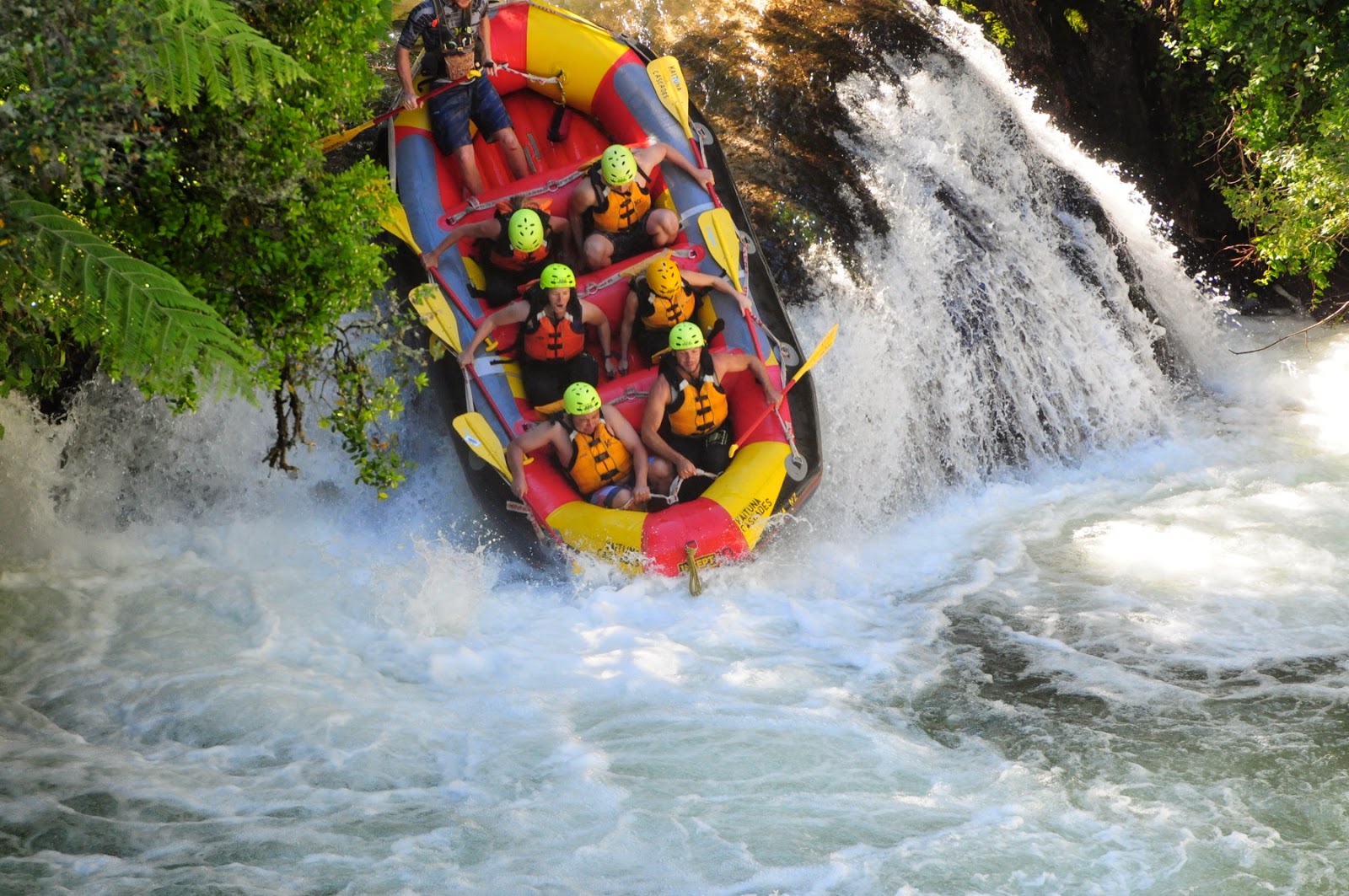 We were now half way down the river, with the two biggest waterfalls to come. Hearts were pumping, but we were getting used to the raft, the bumps and falls. We were even allowed a little dip in the river at a slower point, floating feet first for 20m or so before clamoring back into the raft.

Paddles at the ready, it was time for the first big waterfall. One last team shot with paddles raised before we sailed over the edge. 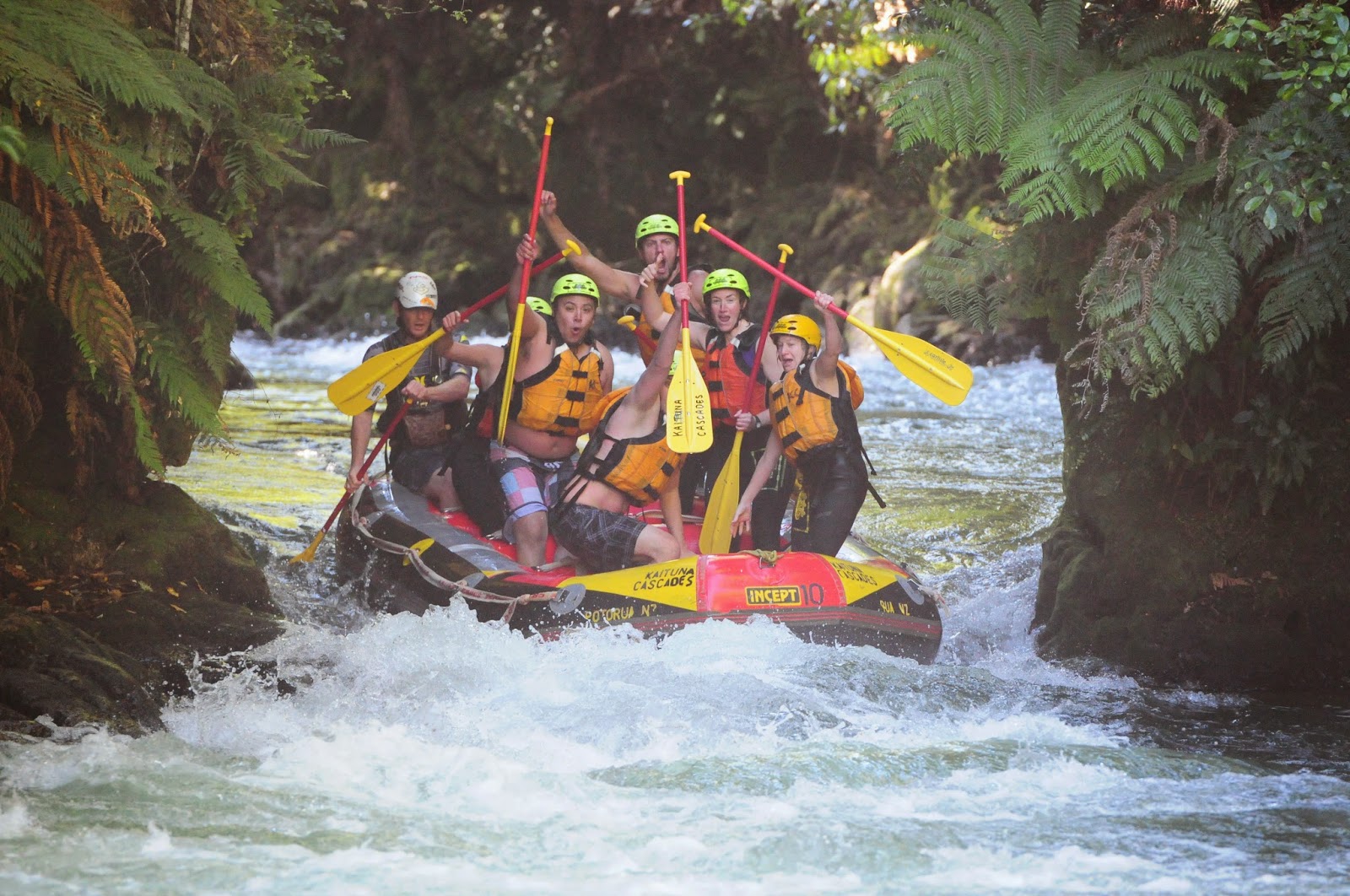 We approached the top of the first waterfall and put into practice what we’d learnt back at the base. Paddles to the side, tuck yourself down into the raft with your head down, and hang on for dear life.

With a mouth full of water and adrenaline levels reaching an 8, we’d made it. 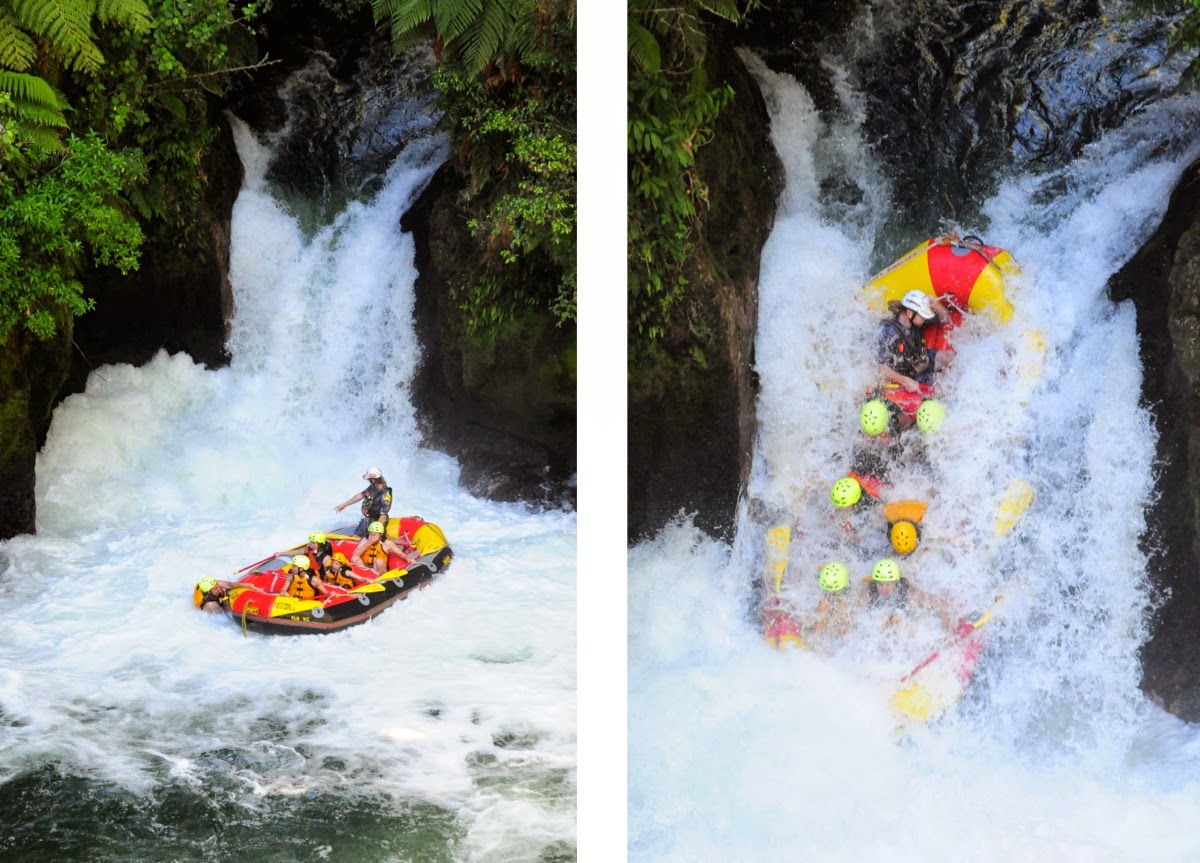 Loud whoops and cheers were made as we came out unscathed. But the highest waterfall was yet to come. Tutea Falls – which gives the river a Grade 5 when it comes to white water rafting.

We waited for the other raft to go down first, and then it was our turn. Same drill, tuck, duck and hang on! The raft went down the waterfall and at the bottom we were completely submerged underwater for what felt like ages. Adrenaline levels were through the roof. I felt the raft tip to the right, and just as it popped up above the water I saw my Chilean friend fly out of the raft, upside down, and another girl disappear in my peripheral vision. Bodies were going everywhere! 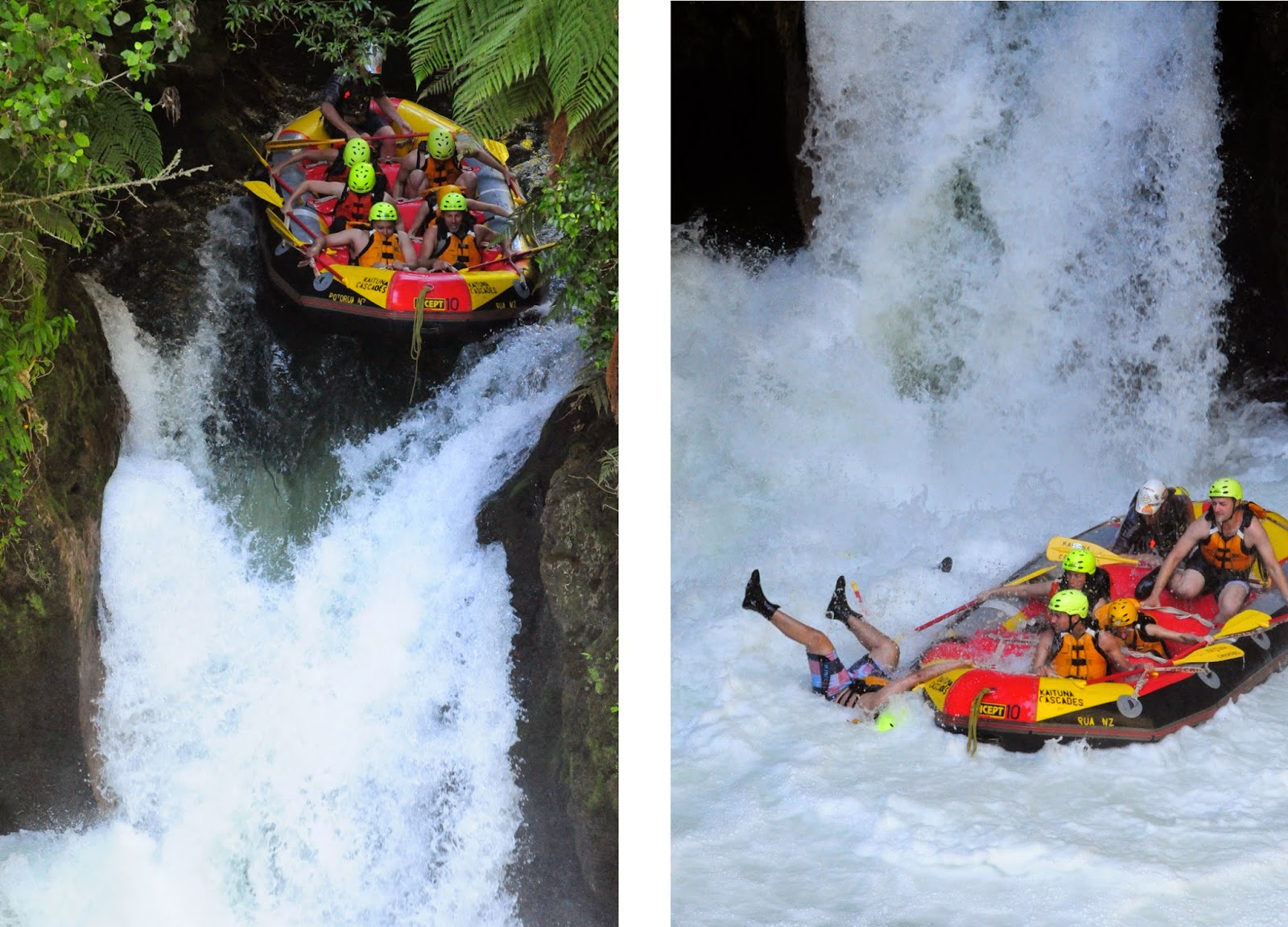 Thankfully both team mates were fine after swimming back to the raft from the waterfall. Scary stuff, but made for some highly entertaining photos!

30 minutes of rafting had gone very quickly, and the remaining 10 minutes was spent playing around with different, smaller waterfalls, including ducking the front of the raft into the waterfall as group members rotated the front two seats. 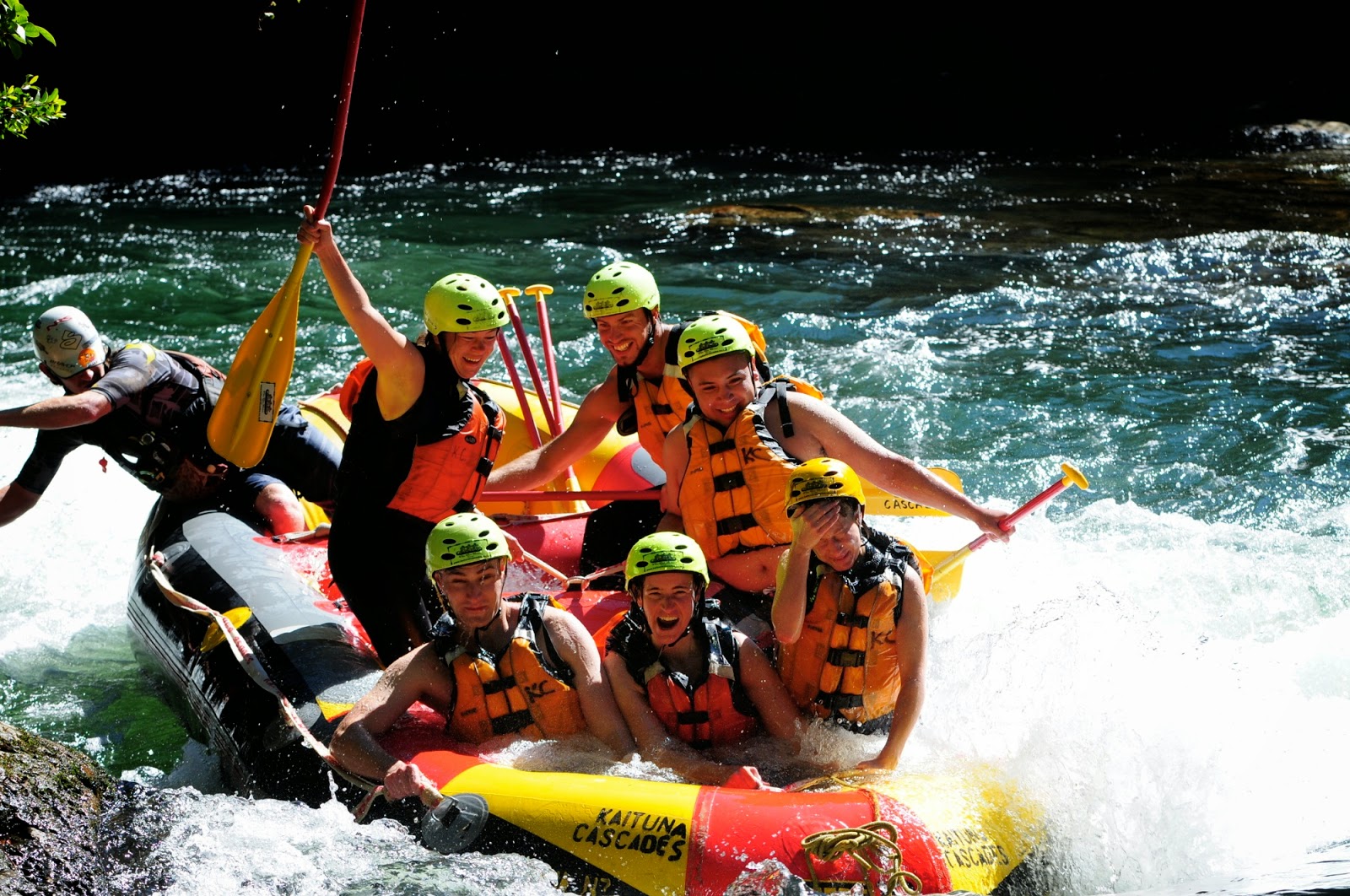 Eventually we made it back onto dry land. But the Kaituna Cascades team weren’t done with the adrenaline shots. “Who likes jumping off stuff?!”. An overwhelming response from the group, which was unsurorising considering our adrenaline levels were through the roof. “Who likes jumping off BIG stuff?!”. Mixed response this time, but ended up with the girls stayed put to jump off stuff, and the boys heading over a bridge and up a path to jump off big stuff.

With the adrenaline still pumping through the body, one by one we jumped off a cliff into the river 15m below – a great way to cap a great morning.

A short swim later and we were finally done. Back to base to look through photos, spend the rest of the day wrestling our wetsuits, and to collect tea and medals.

Safe to say, if you’ve never done white water rafting, I’d highly recommend it! The team at Kaituna Cascades were awesome, so if you’re planning on visiting Rotorua in New Zealand, look these guys up!

Touring The Bay Of Islands In New Zealand’s Largest Houseboat