The Bay Of Islands is situated in the very North-West region of the North Island of New Zealand. It is one of the most popular destinations in the North Island, and for very good reason.

The bus journey from Auckland to Paihia takes around 3 hours, so whilst munching my way though a packet of Haribo Tangfastics, I had plenty of time to work out what I wanted from the Bay of Islands trip. 1) A bay. 2) Islands. 3) A houseboat. 4) Dolphins. I was pretty sure 1 – 3 were achievable. Dolphins could be a stretch.

Arriving into a wet and windy Paihia, we saw the brown wooden house boat bobbing around in the marina. “Say hi to The Rock – your accommodation for the next 2 days!“, said our tour guide as we got off the bus. I gave a quick wave to the brown houseboat, and then concentrated on the waves that were making the boats look like toys that were being tossed around by a baby.

Thankfully I don’t get sea sick, and my balance is pretty good, so the rocking didn’t bother me. We met two members of the crew on the jetty, and then jumped in the rocking orange dingy for the 10-minute transfer to The Rock.

We jumped out of the dingy (literally) and onto the houseboat, which was remarkably stable given the rocky waters.

“Welcome aboard the Rock guys – the biggest houseboat in New Zealand! What are your names? I’ll show you to your rooms!”

I dropped my stuff in the room, then headed down for a tour, which I thought was odd, given the boat isn’t that big.

“We have a pool table, sink to wash up, free tea and coffee, a bar, a BBQ, fishing rods, kayaks, a log fire, books, a guitar, downstairs loo, and some wetsuits.”

I stood corrected. The Rock had everything. It even had a decoy duck.

“What’s that for?“, I asked. “This is Matilda. You’ll find out a little later what she’s for”, came the crew member reply. Fair enough. Matilda and I sat at the bar and had a free cup of tea whilst we waited for the other group members to board.

Once everyone was accounted for, there was a safety briefing, swiftly followed by one of the crew putting on some goggles, and bringing out a loaded paintball gun.

“Ok guys, Matilda is going for a paddle. You have to come up to the back of the boat, introduce yourself, give one fact about yourselves, then you get three shots at Matilda. If you hit her, you get a free drink from the bar!“. It was the most extreme way of getting to know others that I’d ever experienced. But it was fun. 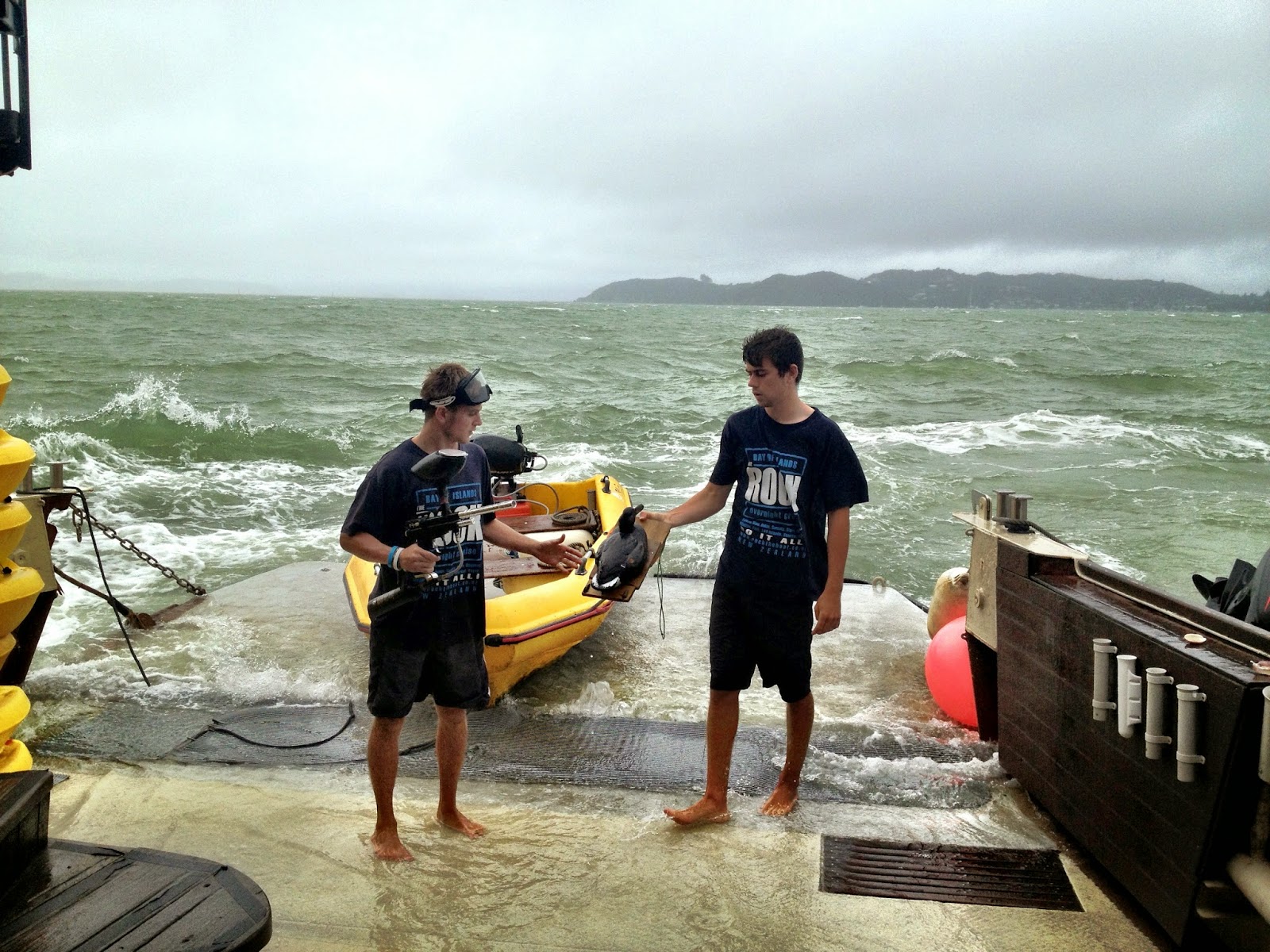 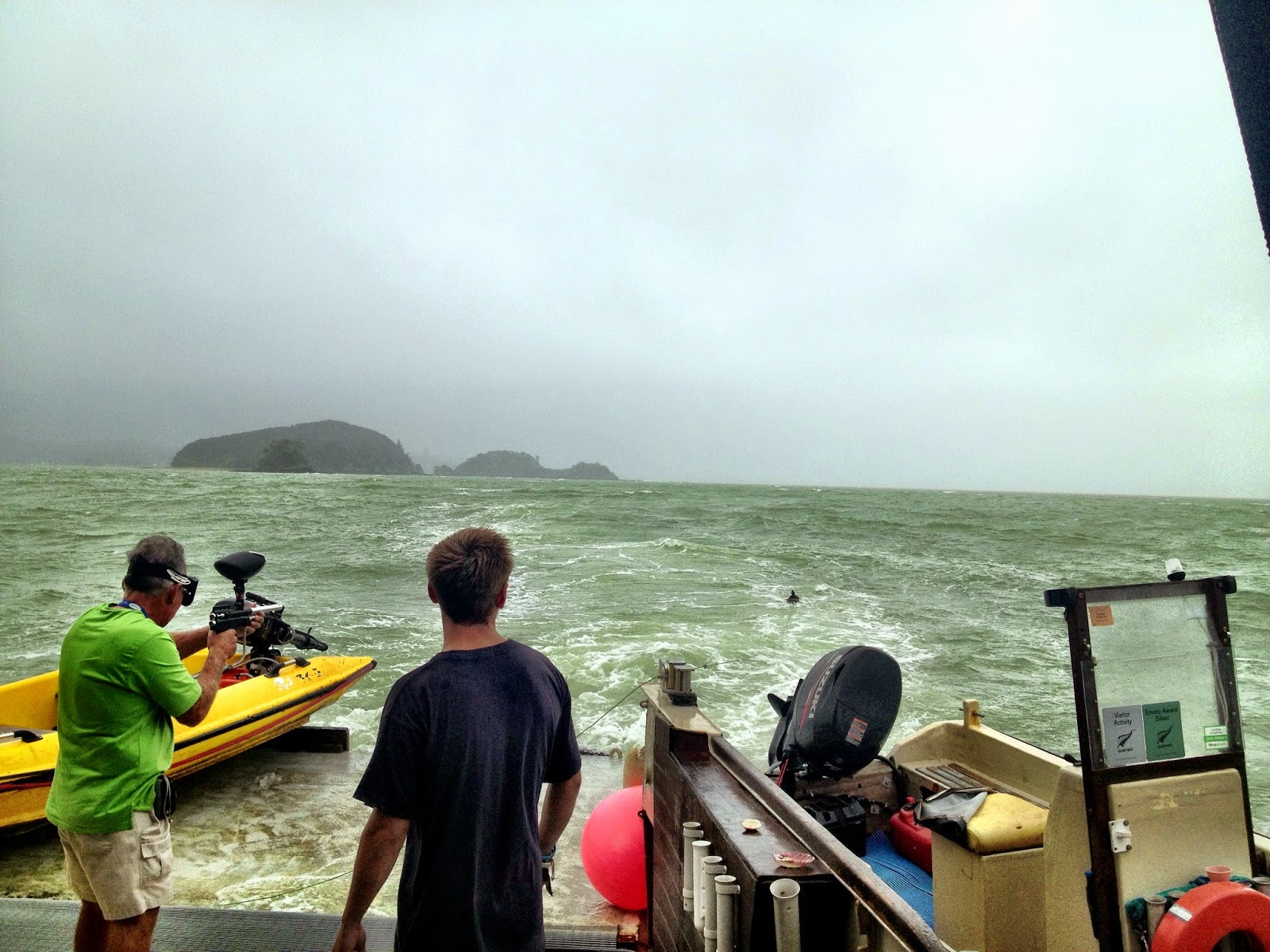 After a couple of games of pool (marbles really) on the rocky sea, it was fishing time. We each got a rod, a lovely yellow rain jacket, a quick explanation of how to fish, some bait, and then we took our positions on the back of the now still boat.

“The first person to catch a fish gets a free drink from the bar!“, was the shout from the crew. I was liking the competitive theme on board the Rock.

5 minutes past, and guess who caught the first fish? That’s right, yours truly! I drank the beer and baited (no pun intended) everyone else for not being quick enough.

An hour later, the sun started to set. The rods were packed away, and it was barbeque time! 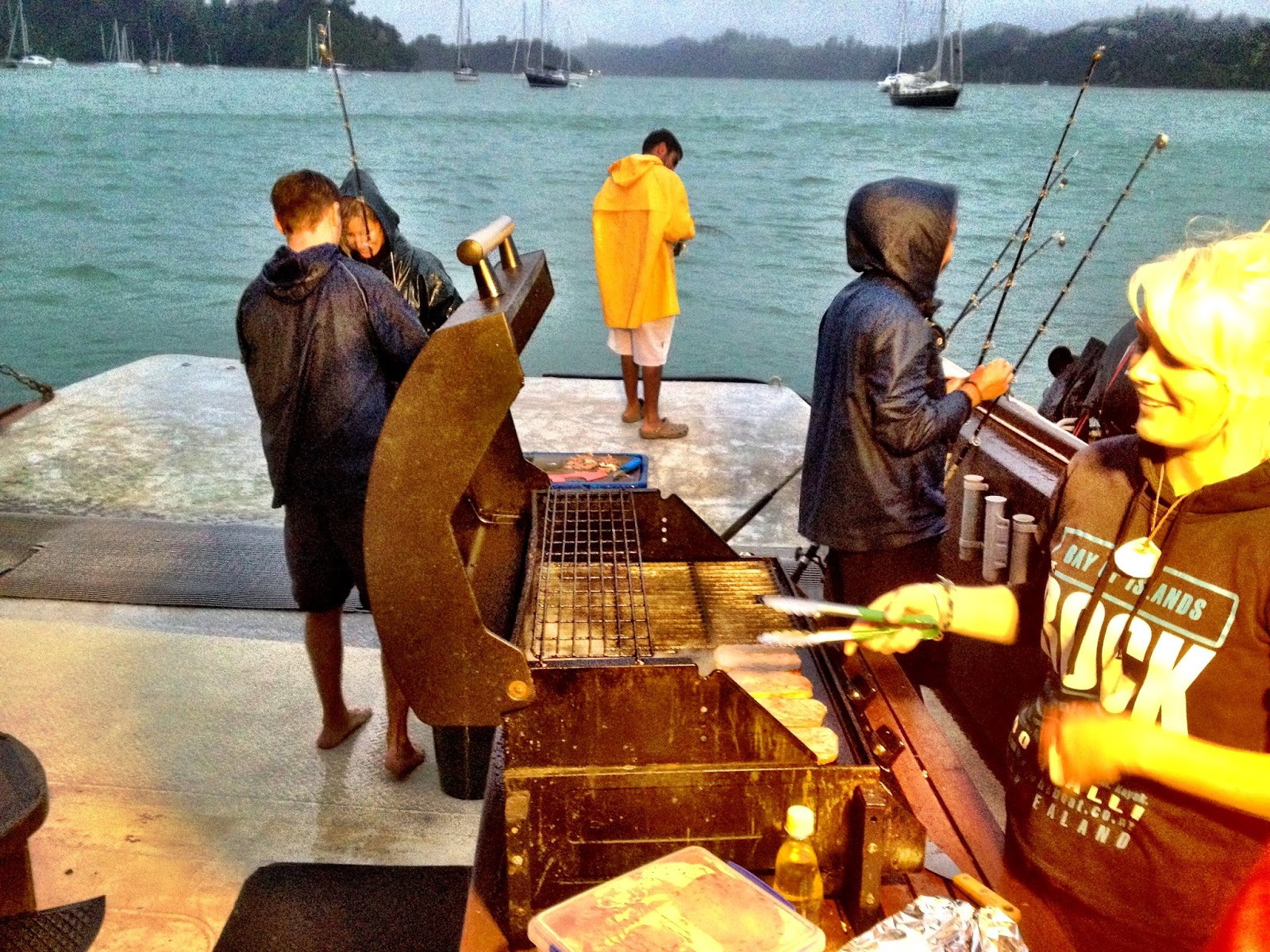 Any fish we caught were thrown on the BBQ, along with some tasty burgers, sausages and steak. With full bellies, there was a post-dinner activity waiting for the group – night kayaking.

One by one we pulled on a wetsuit, and jumped into a kayak. We paddled away from the boat, and towards darkness. The view was stunning. Looking up, you could see hundreds of stars in the clear sky. Looking down, we learned about the incredible phosphorescence. Moving your hand or paddle through this sun-charged algae makes the water light up in pastel blue or green. It was an amazing sight, made even better by knowing I was in one of the few places in the world where phosphorescence could be experienced. If you’ve ever seen the film Life of Pi, it’s just like that. Just not as bright. And without the whale.

We paddled back to the boat, and were greeted by a roaring fire (fear not, it was a completely safe and encolosed wood burner). After a shower and a cup of tea, we settled down near the fire, telling stories and toasting marshmallows.

Not a bad first day in the Bay of Islands.

The next morning we were woken by the engine starting at 7am. We were on the move to a new location. After a quick breakfast and coffee, we were given a navigation lesson as well as some Bay of Island facts by the crew – all very informative! 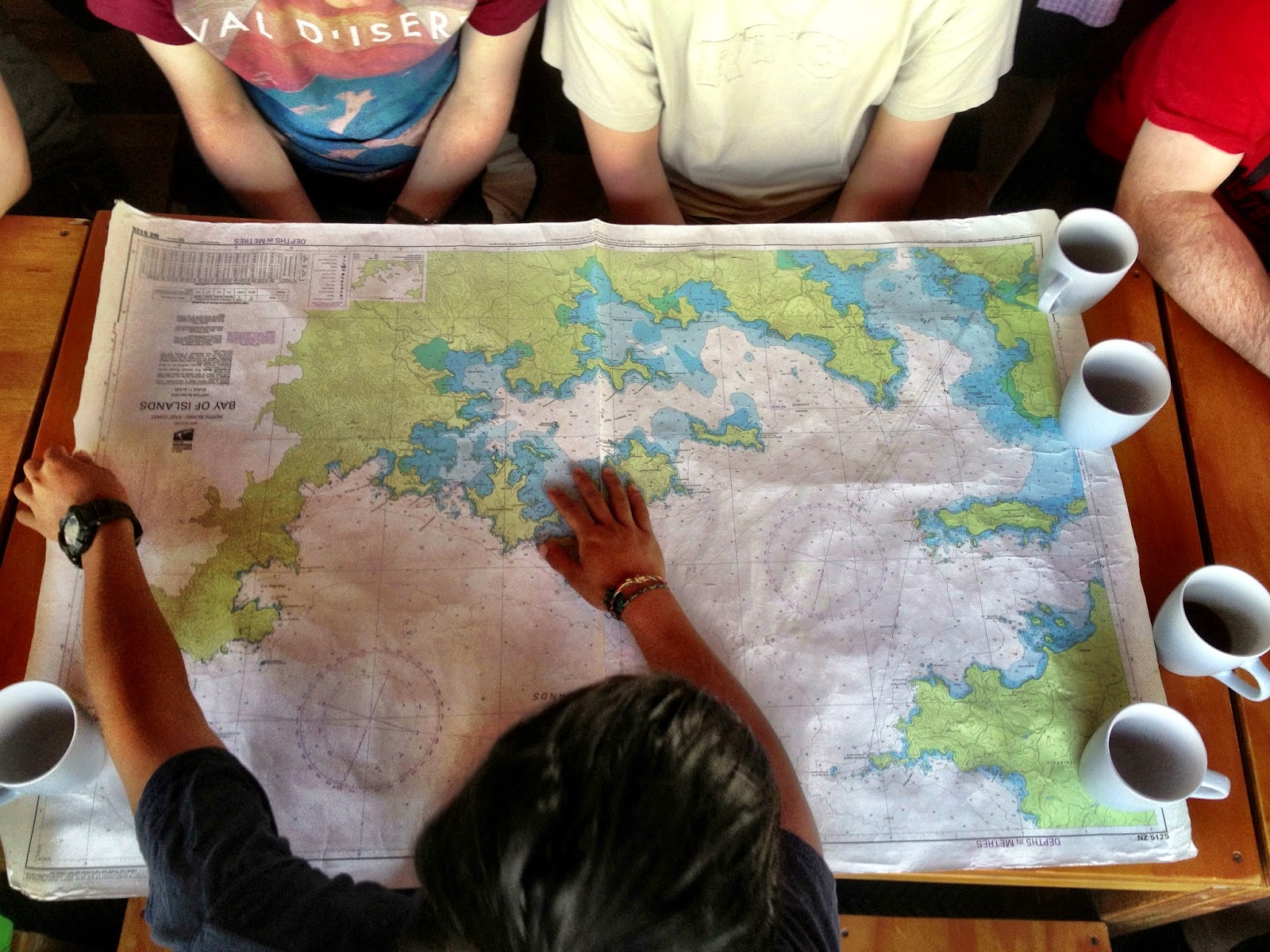 An hour later, The Rock moored, and we kayaked to a nearby island for a walk. Some stayed on the beach, while others headed up the island past some old World War II navy barack foundations, and up to a lookout at the top of the hill. The view was incredible. 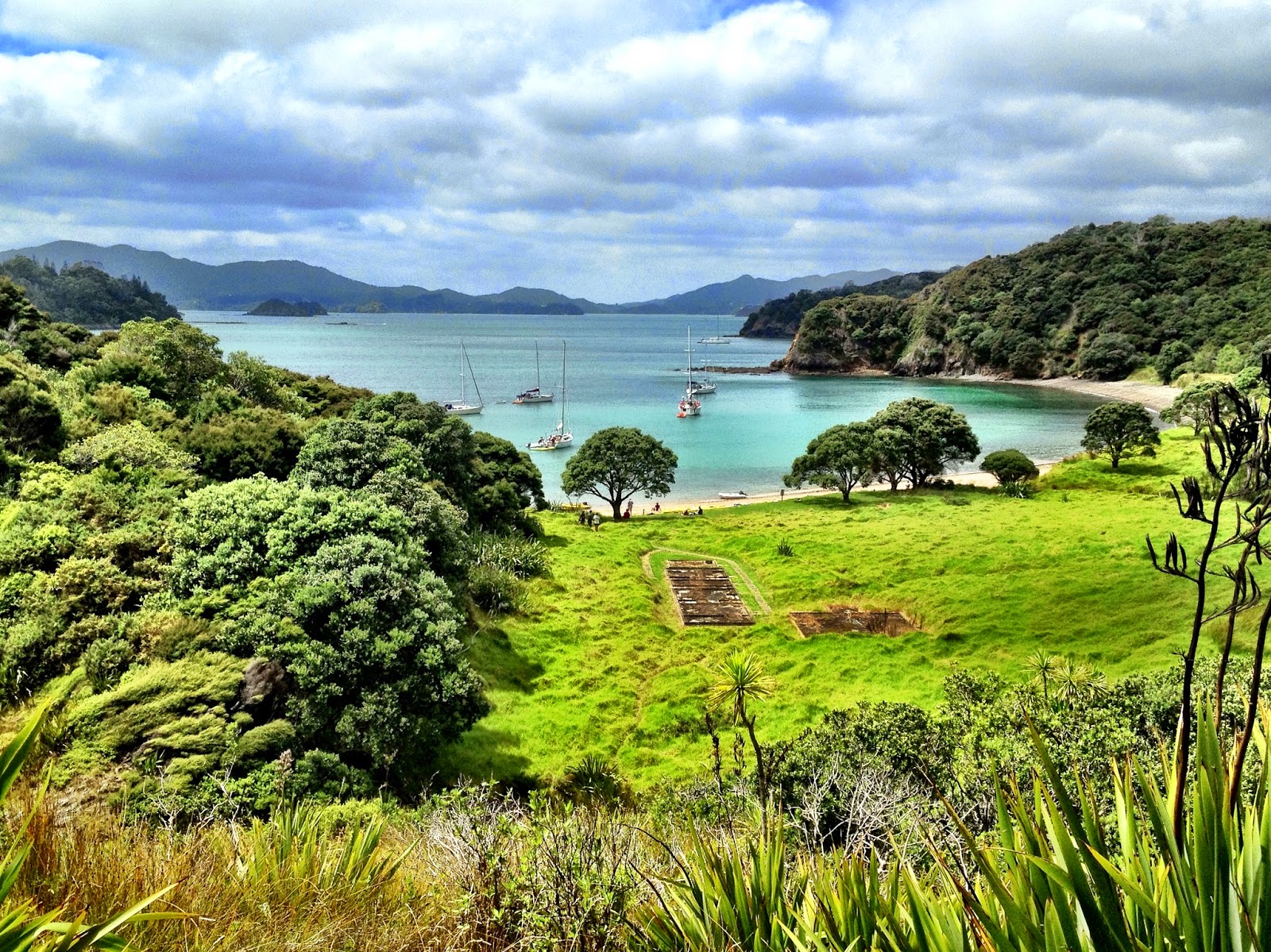 A few of us walked around the cliff to overlook the next bay. I’m glad I did.

Before I even had the chance to exhale a shout, a school of dolphins were swimming and jumping in the bay, right before my eyes. 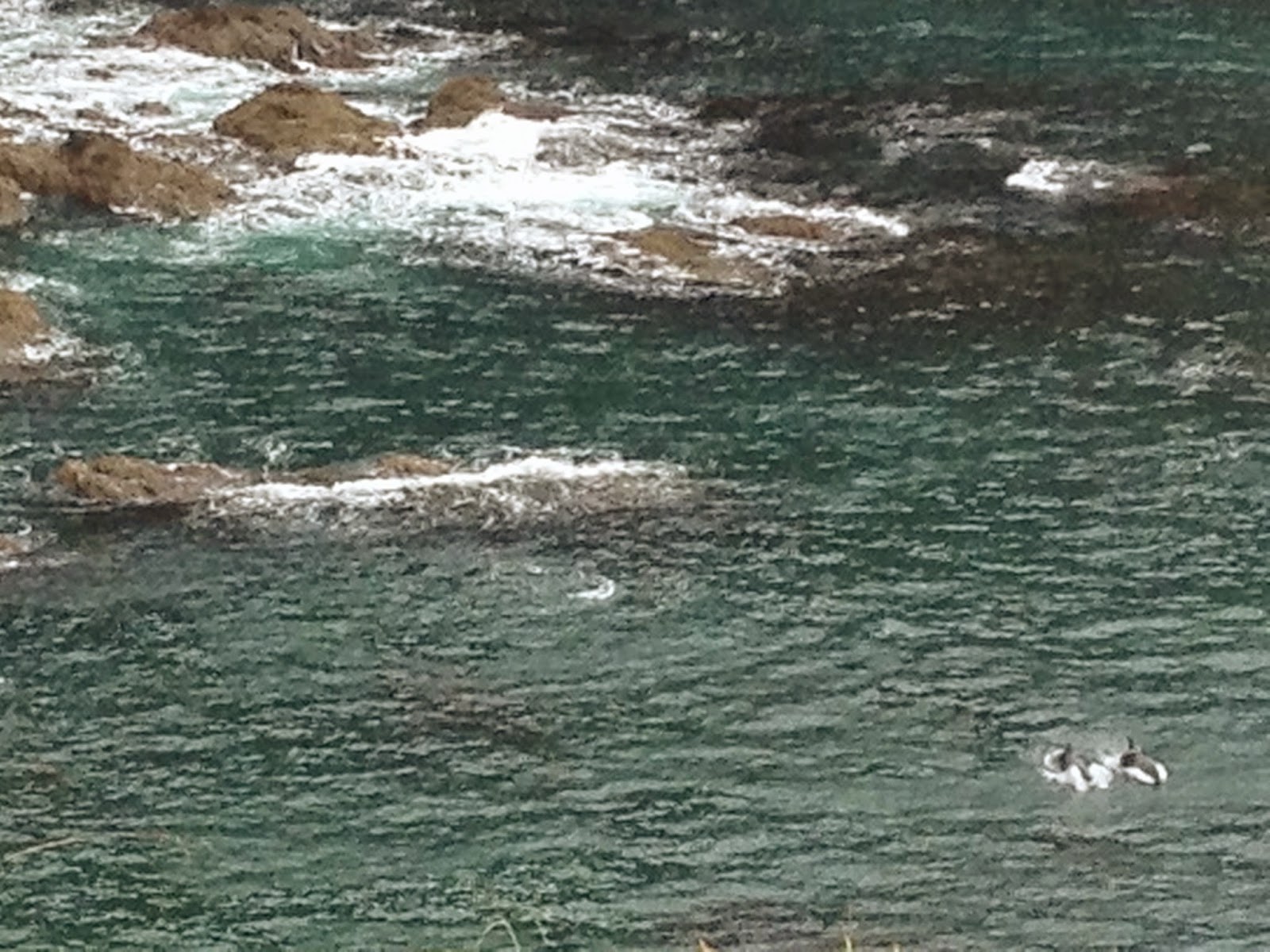 It was times like this that I wished I had an SLR with a very large zoom.

After snapping lots of pics, we headed back down the hill to the kayaks and back to The Rock. I’d just sat down with a sandwich and a can of full fat Coke, and was about to look through my photos, when I heard a shout from the front of the boat.

“DOLPHINS!“. The sandwich went up in the air as I ran to the front of the boat. Amazingly it seemed the dolphins had followed our kayaks back to the boat! We looked at the crew. The crew looked at us. “What are we waiting for?!“, came the shout. My shirt came off, and I dived in, along with four others.

Not only did I see dolphins, I also got to swim with them in the wild!

When the adrenaline in my system finally died down, and my sandwich had digested, we were told the last activity on the boat was snorkelling and diving for sea urchin, known as kina.

These spiky little creatures attach themselves to rocks under the water, and then feed on algae. “Any we catch, we can eat the egg sacks back on board!“. That didn’t sound too appetising, but I’m always of the mindset you have to try these things when you travel.

We caught loads. When the kina was cracked open, it looked like something out of an alien movie. It has five teeth in the middle which filter the algae, and two or three egg sacks. Down the hatch! It tasted like a mussel. A much more ‘salty sea’ tasting mussel, but a mussel all the same.

A final shower, and it was time to motor back to Paihia. The Rock was an amazing, fun two day experience which included everything I was expecting, and much more. The scenery was fantastic, the activities were great and swimming with dolphins is something I’ll never forget.

If you get the chance, join Ben and the rest of the crew for a fun two day cruise.