I didn’t realise it at the time, but looking back, this was a ‘once in a lifetime’ experience.

A couple of years ago I flew First Class with British Airways. And no, I wasn’t on my honeymoon. Which is going to make things a little awkward for the future 🙂

I know what you’re thinking. How on earth did he afford to do that?! Well, through a mixture of air miles/Avios, personal choice, and a sales presentation in Washington D.C, I managed to fly British Airways first class from London Heathrow to New York City on New Years Eve, 2011.

At the time, flying First Class didn’t seem like such a big event. I’d flown business class with British Airways, Etihad Airways and Emirates for various work trips around the world, so I assumed First Class with BA couldn’t be that different. Could it?

This story begins back in 2008, when I signed up for a British Airways / American Express Premium Credit Card. In an agreement with my old agency, all my travel expenses (and nothing else) would be put on this Amex card, and then paid off at the end of each month. I was starting to take around two flights per week, so this was the best way to keep on top of all the expenses – for both parties.

The added bonus was that with the Amex card, I accrued air miles for every travel purchase I made. In addition, I received three times the usual amount of air miles (Avios) when I purchased a British Airways flight. That quickly propelled me into Silver status with BA, meaning I got even more Avios when I flew with BA.

Fast forward to November 2011, and I was working on an international digital marketing pitch, for which the date was set for January 2nd, in Washington D.C.

Personal events at the time made me want to escape the UK for New Year, so after discussions with my old agency, they agreed for me to buy the return flight to New York, but any additional non-work days/nights, and the train to Washington should be paid for out of my own pocket. Fair enough.

By this point in time, I had accrued over 160,000 Avios. When I started browsing the BA site for flights to New York, I discovered that if I flew out on New Years Eve and back the following week, I could get a BA First Class return ticket for under £650…

My response? I sat staring at the screen with my mouth open for at least 5 minutes…prompting former colleagues to throw stuff into my mouth during their lunch break.

I clicked. I used the air miles. I paid. I booked. 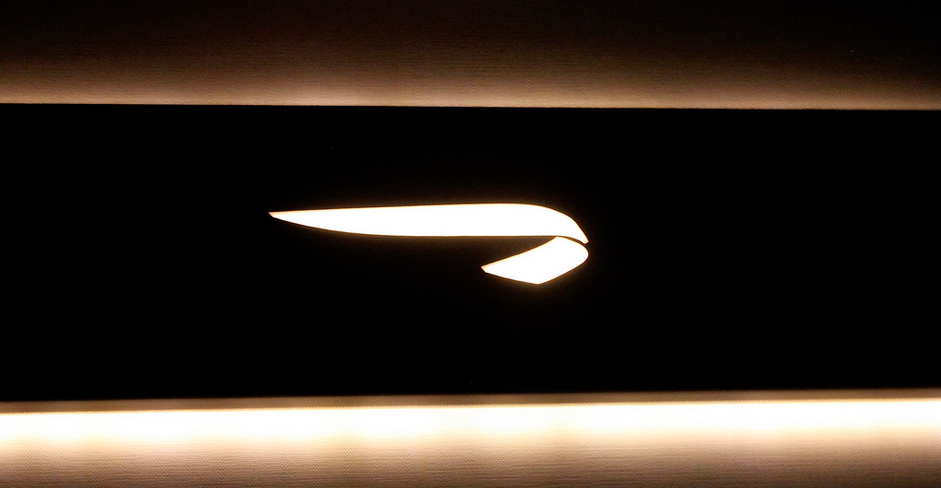 It didn’t really dawn on me that I was travelling First Class until I arrived at Heathrow Terminal 5.

Instead of going to the Galleries Lounge, I could now enter the exclusive Concorde Room.

Not one to miss out on the facilities and food on offer, I ordered eggs benedict with a side of champagne. Well, I’m not one to look a gift horse in the mouth…

Food and luxuries aside, probably the best (yet simplest) highlight of the trip was….being able to turn left as you step onto the plane.

The smirk was quickly wiped from my face as the oh-so-friendly steward spilt champagne into my groin. Nothing like a touch of feeling uncomfortable to bring me back down to Earth!

As I wasn’t in full travel blogger mode in 2011, I didn’t take many pictures, but I have sourced a few to give you an idea of what the cabin looked like, and the overall experience.

My seat was very comfy indeed. Complete with all mod cons, including a USB charging area, storage, and the ability to fold out into a flat bed. Well, a flat bed for someone under 6ft tall. I had to scrunch a little.

Aside from the earlier champagne spillage, the highlight for the flight for me was the amazing food and drink on offer. 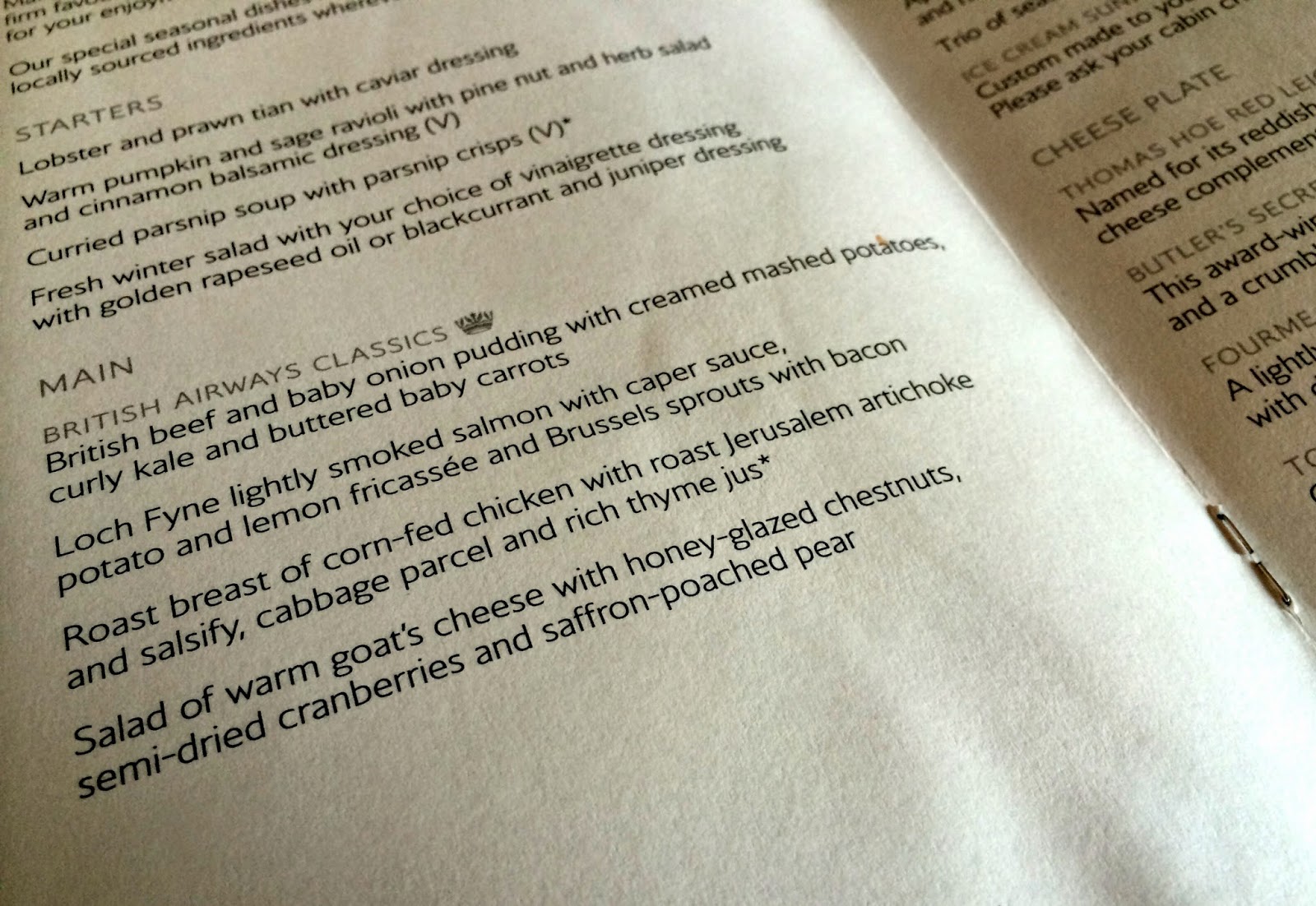 As part of their ‘Height Cuisine’ initiative, BA was exploring ways to ‘counteract the effects of altitude on your taste buds’. I’m sure they meant the food, but I wasted no time diving head first into the drinks menu. First up, an aperitif of Kir Royale. Followed by another. You simply can’t account for passenger boarding taking longer than usual.

This was then swiftly followed up by a glass of Laurent-Perrier Grand Siecle champagne. The next hour of the journey looked a lot like this:

With the plane now well up in the air, it wasn’t long before the food arrived. I went for the starter of lobster and prawn tian with caviar dressing – delicious! 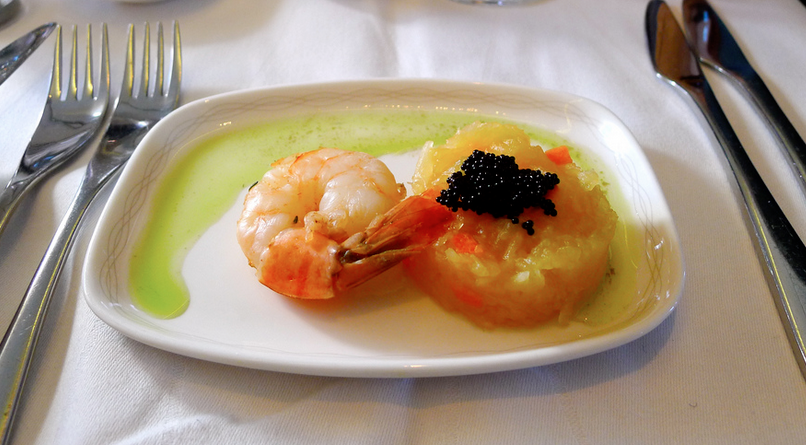 This was then followed up with a ‘British Airways Classic’ – British beef and baby onion pudding with creamed mashed potatoes, curly kale and buttered baby carrots. It was so good I practically inhaled it.

I continued ploughing through the wine list. White with the starter, red with the main. With a selection of cheeses, some fresh fruit and a few chocolates to finish, I had to give the 1992 Colheita Tawny Port a try too. I savoured every drop.

By this point, we were somewhere over the mid-Atlantic, so I settled down to watch a film, and caught a bit of shut eye.

Before I knew it, we had landed at JFK, and heading into the city. My hotel of choice in New York for the next few nights? The ACE Hotel in the Flatiron district – great rooms, and an equally great range of craft beer behind their lounge bar.

Now, I’d love to tell you that after checking into the hotel at 8pm I would have had my night planned. Not so. In fact even with a plan things wouldn’t have gone to plan.

After all the effort of making it over to New York on New Years Eve….I had a nap, slept through the bells and woke up at 2am.

The trip to Washington the next day went without a glitch, and I worked from our old New York office for the remaining days. In my state of heightened work, what I failed to realise on the way back out to the airport, was that I got to fly First Class with BA again, back to the UK! Amazing.

I would run through the menu and wine list in detail again from the return flight, but I imagine by now you’ve got the picture. I tried all the food, and drank as much of the wine list as I could 🙂 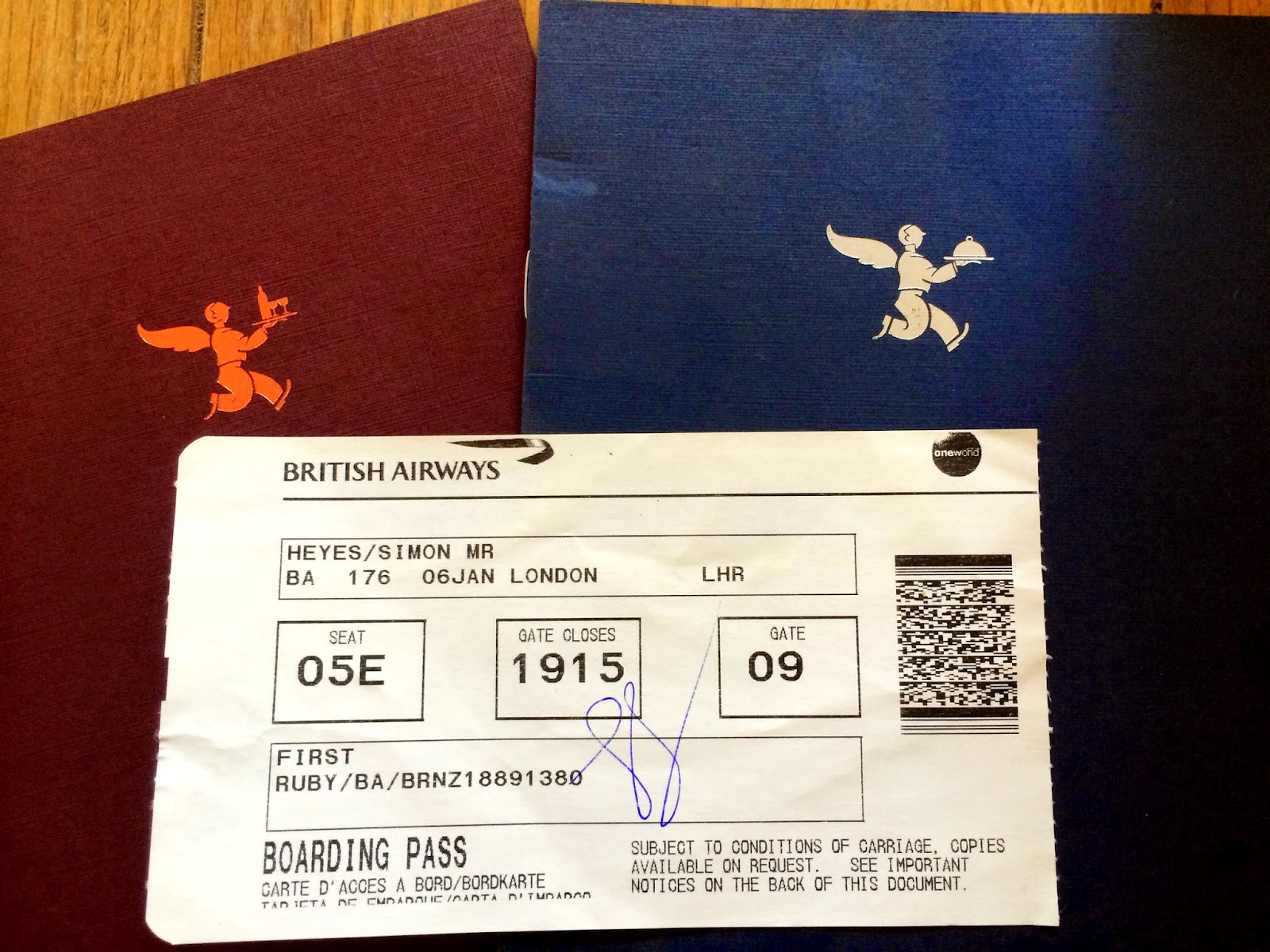 Flying First Class with British Airways was an amazing experience, and one I hope I can repeat at some point in the future. Business class is good, but First has those little touches of luxury that can only be experienced by those fortunate enough to travel in the First Class cabin.

I finally used up all my air miles after our New Year break to Munich at the beginning of this year. Despite the amount of miles I racked up with BA, I’m am now in lowly Bronze class.

Maybe my time of business class flying will come again, and maybe it won’t. All I know is that I’m very lucky to have had the First Class experience, and I enjoyed every minute.