You’ve seen Jurassic Park, right? Remember at the beginning, where Richard Attenborough flies into the park in a helicopter, and you see those amazing views of the landscape, including waterfalls, mountains and rivers? That was almost identical to my experience at Milford Sound, one of the most stunning places in New Zealand. 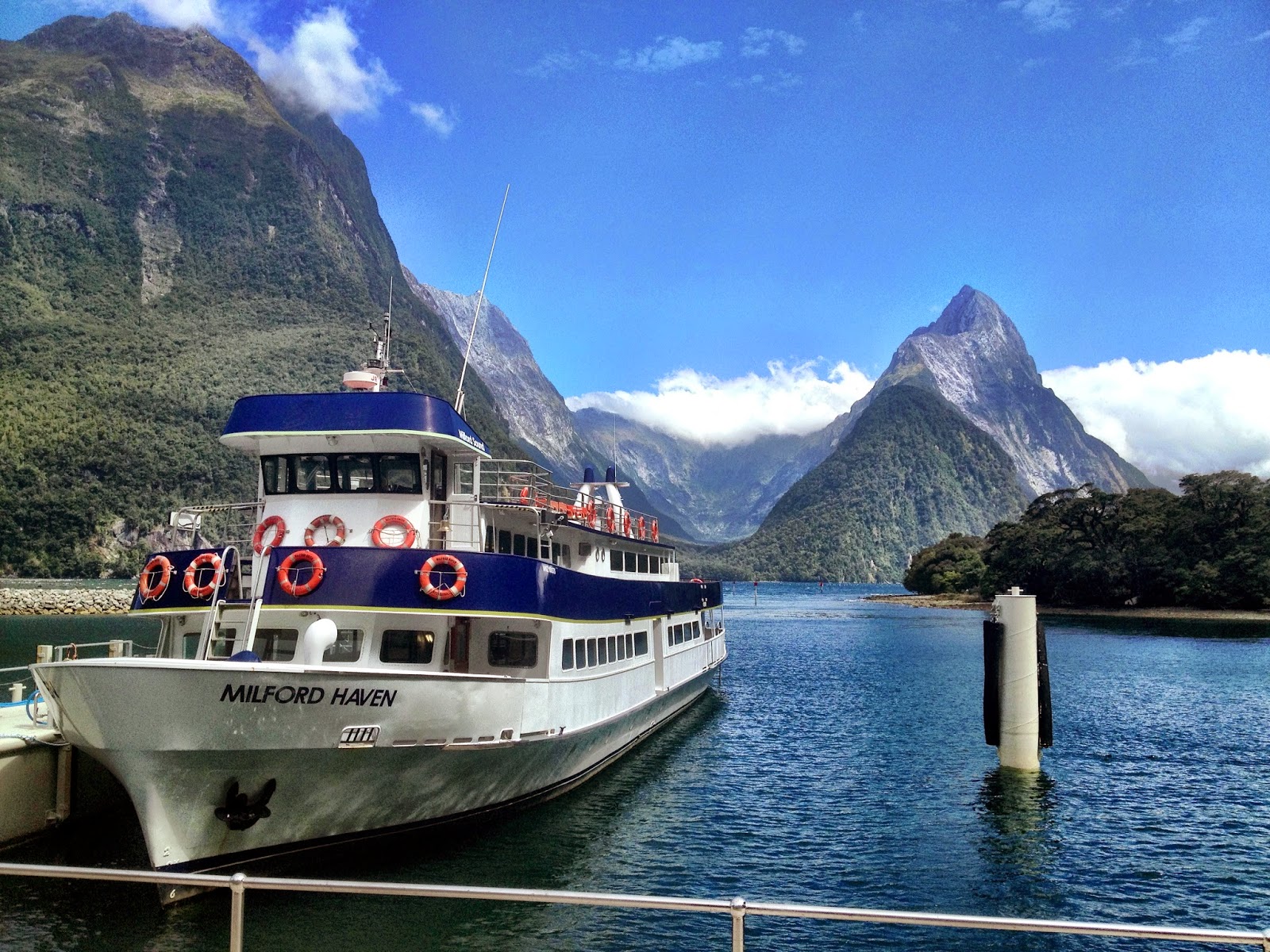 Milford Sound is about a 3.5 hour bus journey from Queenstown. I’d heard spectacular things about Milford Sound from fellow travellers, so I knew I couldn’t miss out on exploring it.

We made three stops on the way to Milford Sound. The first stop was in Te Anau to collect some snacks and drinks, the second at the ‘mirror lakes’, but it was the third stop – in the heart of the Fiordland National Park – that started taking my breath away. 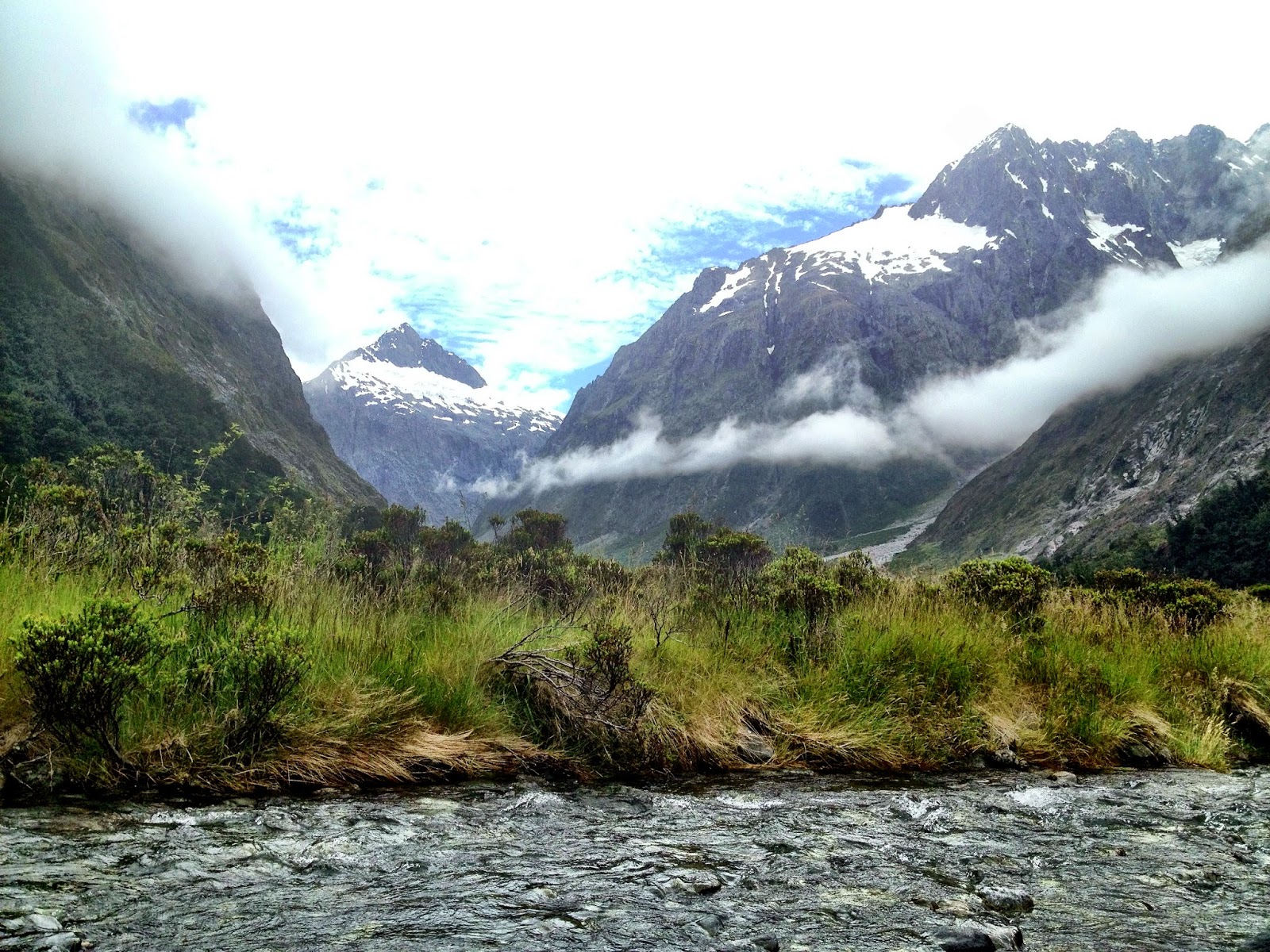 This was Lord of the Rings country, and the shear steepness and greenness of the mountain sides, plunging into rivers and streams, made it absolutely breathtaking.

We arrived at the end of Milford Sound Highway 94, hopped off the coach, and took in the views. With a small airport next to the dock, it was incredibly picturesque and peaceful.

We boarded the boat, and I took my place at the front, so I could get prime views of the fiord. Camera at the ready, we left the dock. After a brief introduction and safety briefing, we soon reached our first stop, next to some sleepy seals. 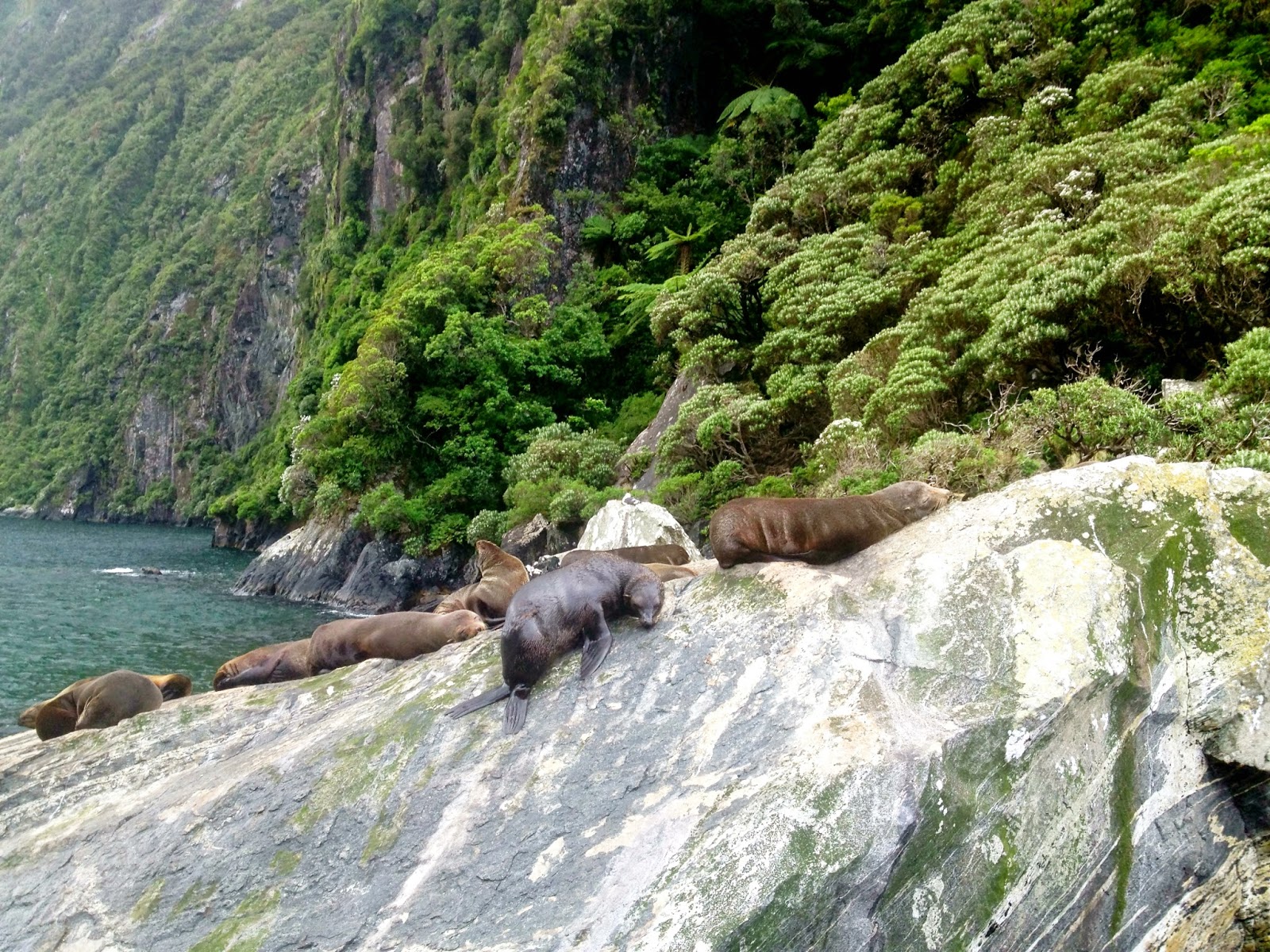 Looking around, there were sweeping, steep mountains, cloudy blue skies and high waterfalls plummeting down into the sound. It was spectacular. 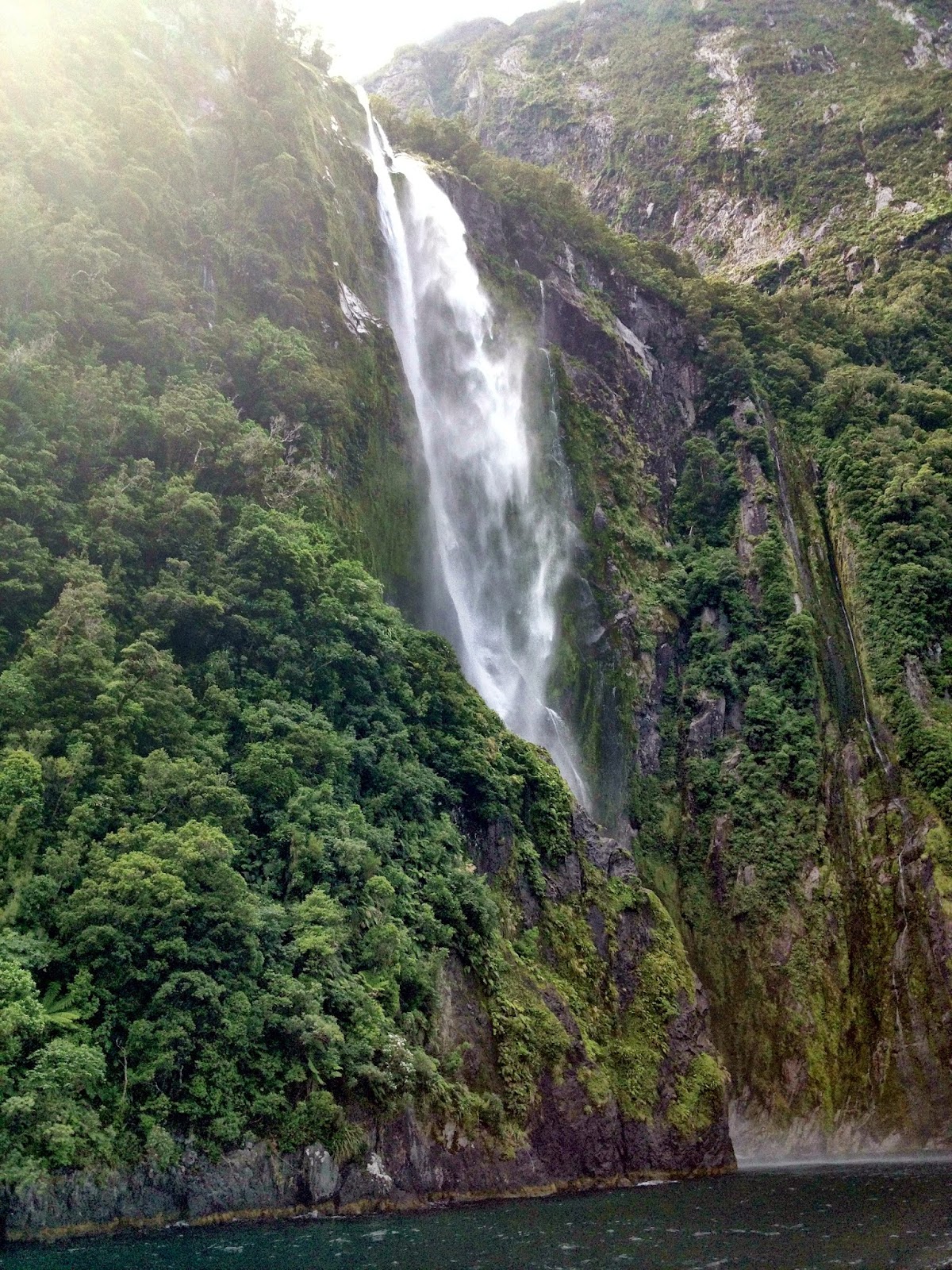 We reached the Tasman Sea, ate the snacks we picked up in Te Anau, and headed back to port.

Any image I took wouldn’t do the view justice.

I remember points on the return leg where the entire boat was silent as people just took in the views. We stopped at another dock to drop some people off, and whilst most people headed to look at the port, I headed to the back of the boat to snap a few more pictures. I’m glad I did. Another small ferry was heading up the sound, and for me, this was my favourite picture of the trip. 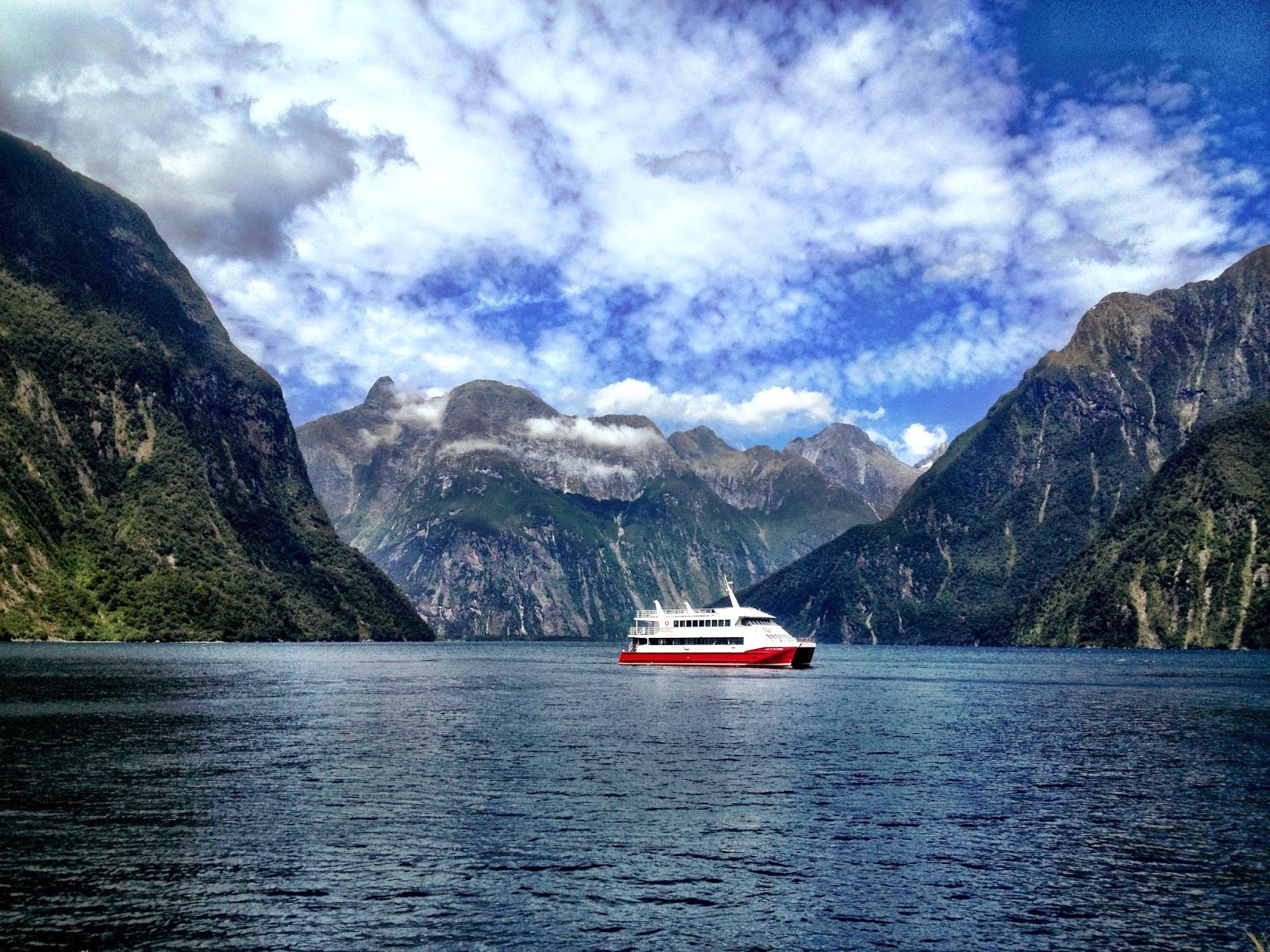 It captured the mountains, the blue sky, the lush green mountainsides, the cloudy blue skies, the water reflections…everything that Milford Sound embodied. Due to the time of year (February), I wasn’t lucky enough to have snow capped mountains and dolphins swimming next to the boat, but I wasn’t about to complain. It was an incredible experience….and one that was about to get even better.

Heading back to the coach, we were offered the chance the fly back to Queenstown. Me being me, I have a ‘you only live once’ attitude, and I probably would never get the chance to fly over Fiordland ever again, in what was now almost clear blue skies. Besides, it was the same 3.5 bus journey on the way back, with the same views we saw on the way to Milford Sound.

Yes you had to splash some cash, but it was a no brainer. I collected my bag, and headed to Milford Sound airport. All I remember outside the airport was the sound of wildlife. Crickets, birds, and the blue sky beating down on my head. 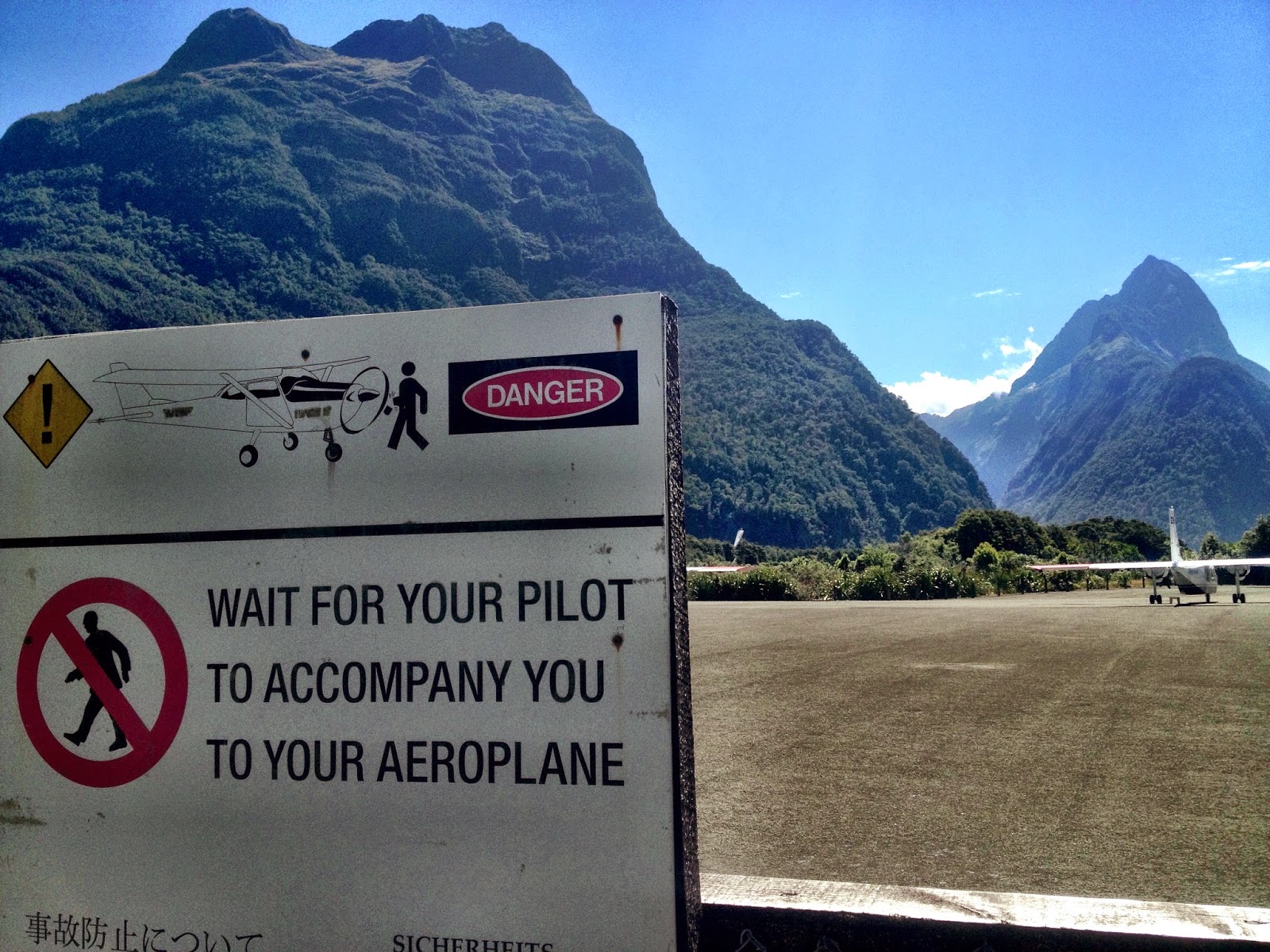 10 minutes later, we were taken into the airfield to our little eight seater plane. We took a few photos, were given a short safety briefing, and then headed for take off. Given there were no restrictions on electrics, I filmed the take off. It gives you an idea of the sheer awe and beauty of the place.

We turned West just before Mitre Peak and headed towards Queenstown. If the views across Milford Sound from a boat were good, then the views from the air were incredible. Lush forest, hanging lakes, waterfalls and some incredible mountain scenery made the 30 minute flight one of my favourite memories from New Zealand. 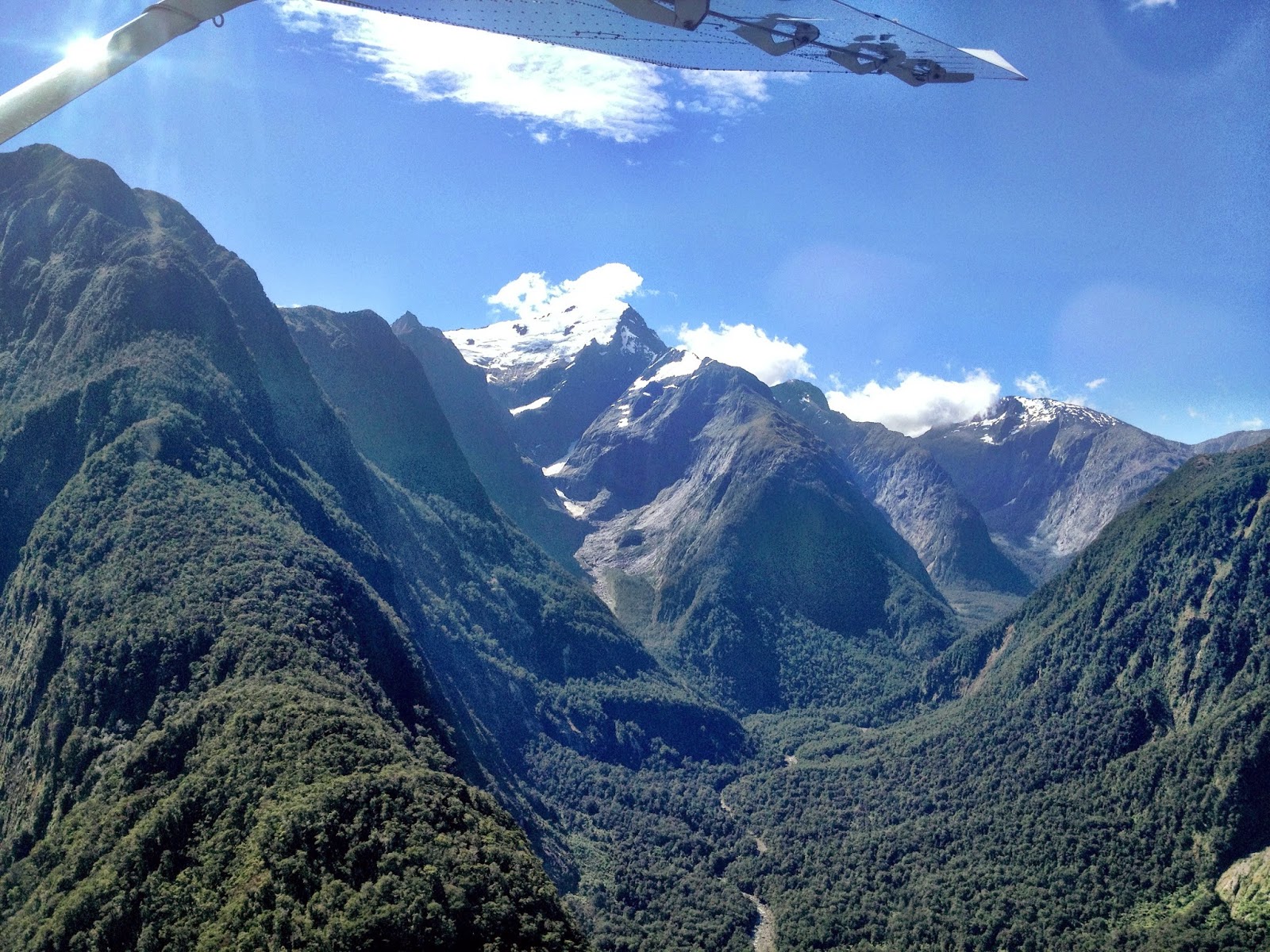 The approach into Queenstown Airport was equally amazing. As we lined up and banked right, I had an incredible view out towards Lake Wakatipu and Queenstown. 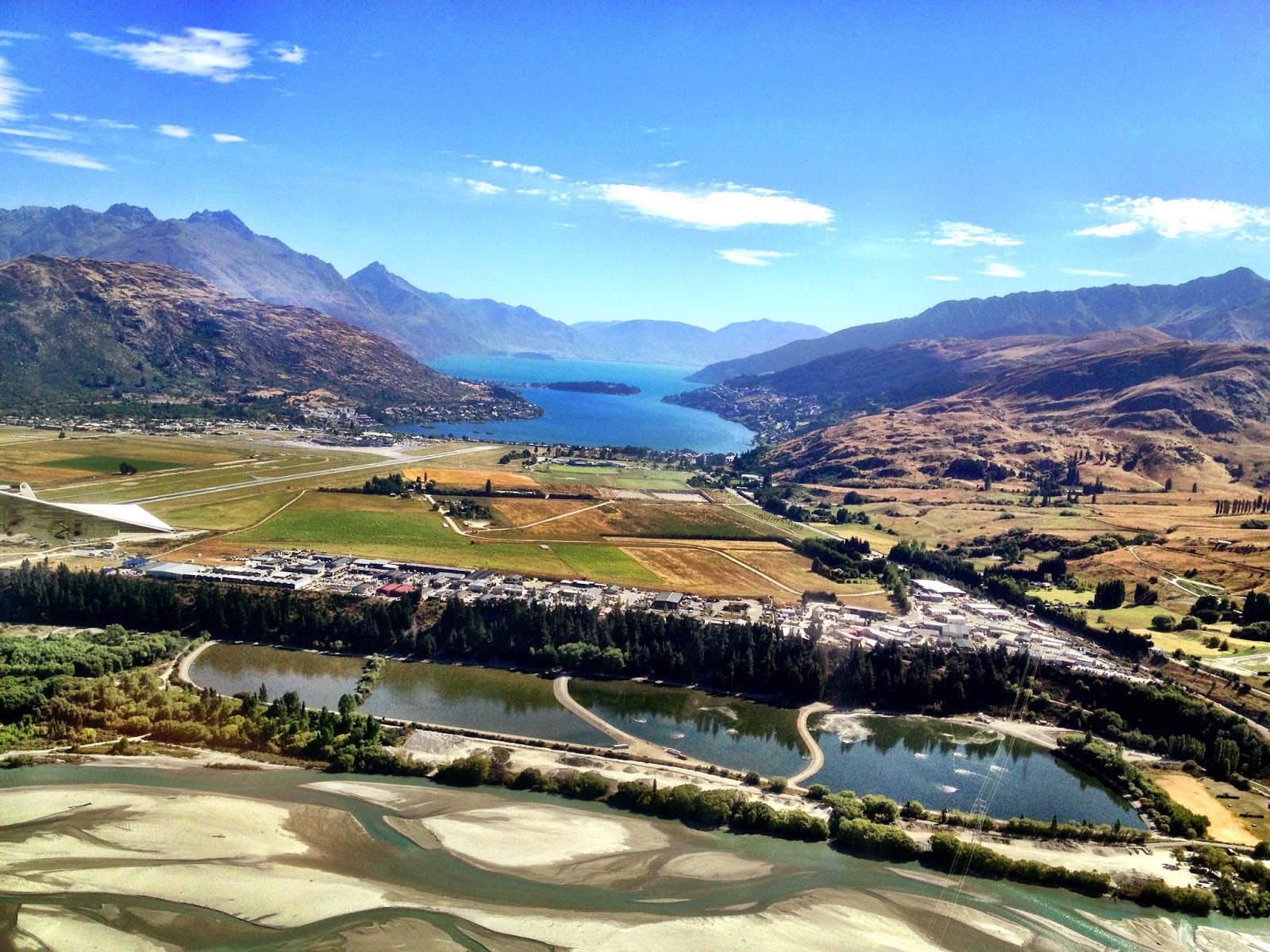 And the best part about Queenstown? No matter how good your day was…no matter whether you felt on top of the world and had to share your story with someone, it seems everyone has their own amazing story to tell. Whether that’s skydiving, bungee jumping, mountain biking, rock climbing…you name it, someone has a story about it.

I had sailed and flown through Jurassic Park, but someone else had skydived into it. Definitely worth a beer or two to celebrate.