Every year since we finished University, myself and a group of friends would take it in turns to cook Christmas dinner. At first it started off as a simple three course meal, but over time the annual lads Christmas dinner has become increasingly competitive.

It’s a once a year, annual Come Dine With Me, and oneupmanship at it’s finest.

A few years ago a friend of mine created the most amazing rabbit terrine as a starter, and it hasn’t been beaten since.

I started Googling the idea, and found the perfect set of instructions and recipe on the Guardian website. I looked through the instructions, and the video. It would be the most technical meal I’ve ever cooked, but I’m not one to shy away from a challenge, especially when oneupmanship is at stake.

I set to work on the joining instructions, and created the following poster (yes, these Christmas dinners are taken very seriously, and yes, my nickname is Bambi). 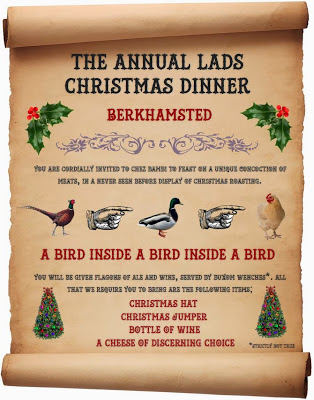 A bird inside a bird, inside a bird. In this case it was going to be a pheasant, inside a duck, inside a chicken. A three bird roast.
The trick is to debone each bird the day before, so you have less prep to do on the day. I did the chicken, but the duck and pheasant can be a little fiddly, so I asked my local butcher to help with those.

LET’S GET STUFFING THE BIRDS

I followed the Guardian recipe and created my own Year After Year (YAY) stuffing. It tasted delicious, but I warn you – it was very filling. It’s made from cumberland sausage meat, cranberries soaked overnight in port (my twist on the recipe), chestnuts and leeks. 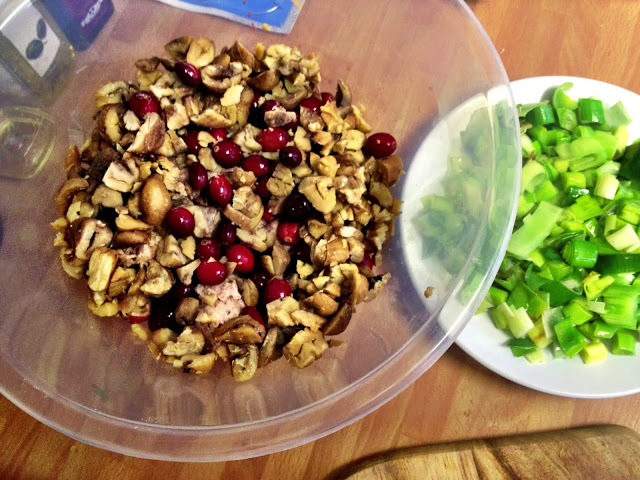 Next up was to start layering the birds. First I had to lie the chicken flat, skin side down, then add a layer of my cranberry and sausage meat stuffing. 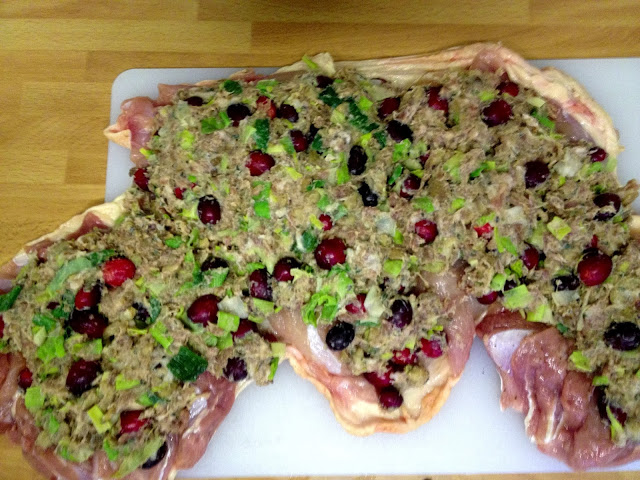 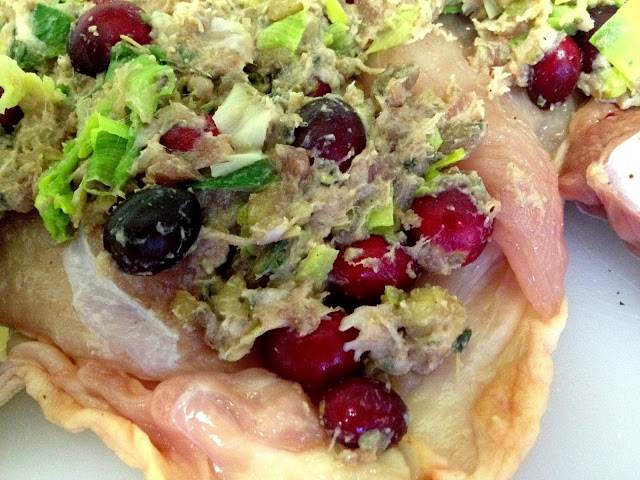 Next up, lay the duck, skin side down on top of the stuffing. 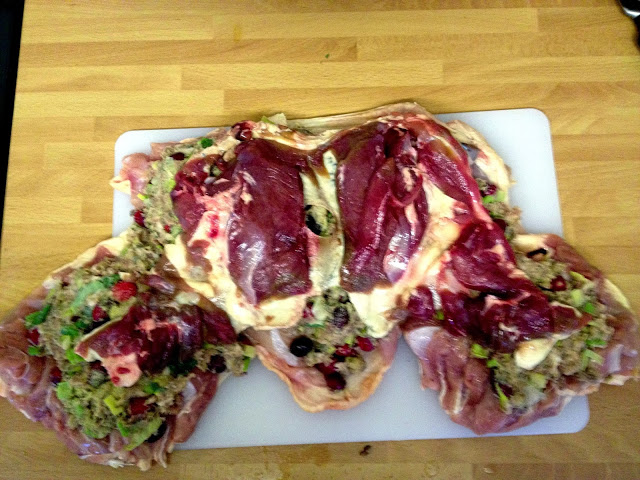 Then add another layer of stuffing. It’s personal preference, but I wanted a different second stuffing. I went for Jamie Oliver’s wild sage, red onion and chestnut stuffing. 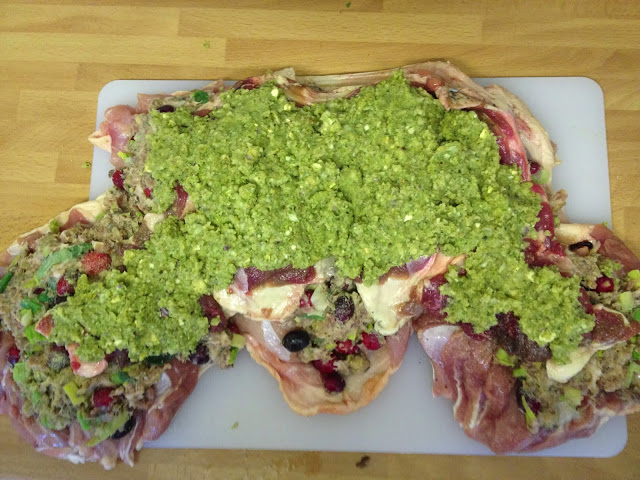 Next, I laid the pheasant breasts on top of the second stuffing layer, with a sprinkling of white pepper. There isn’t a lot of meat on a pheasant, and the leg meat tastes extremely gamey so I just to used the breasts. 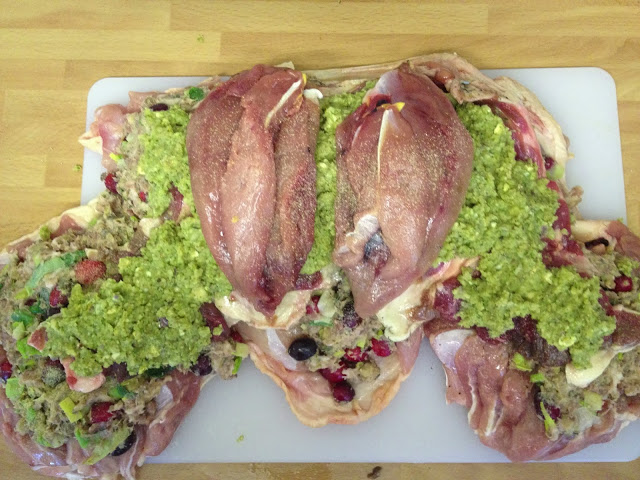 This pile of birds and stuffing was then topped off with a cumberland sausage. This was a massive stack of meat. Not just three meats either. It was four. A four meat, multi-bird roast. 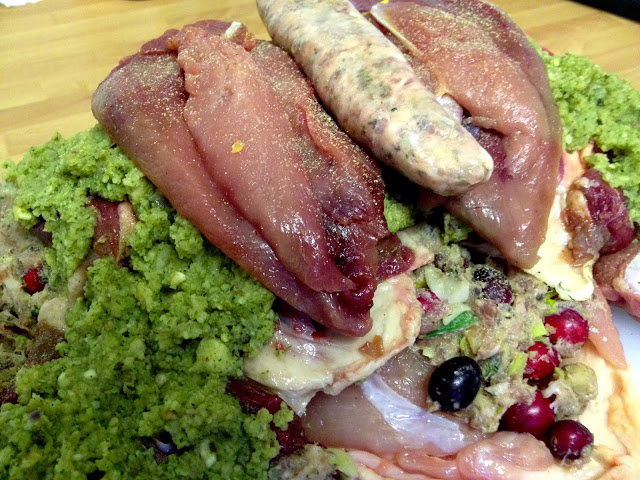 Next came the very difficult part. I got some strong needles from the supermarket, and got some butchers twine from my local butcher. Time to stitch her up!

I carefully folded the duck over the pheasant and cumberland sausage, and made an initial stitch to hold it together. I then folded the chicken over the duck, as best as I could. This was one fat bird! I started stitching all the birds together to make one big, plump chicken. 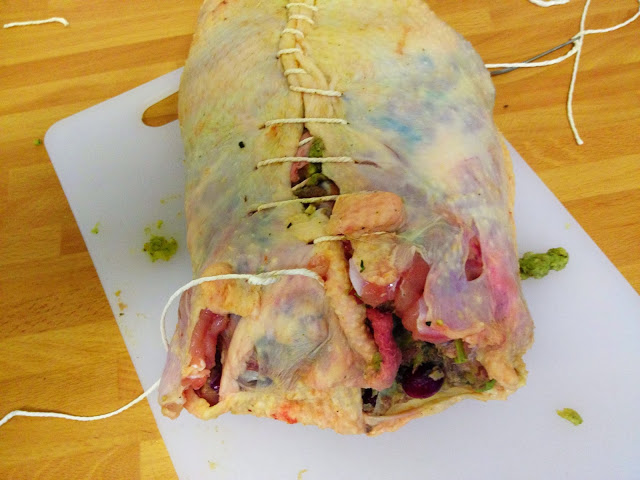 In the Guardian recipe, they used the duck as the outer bird. I discovered why. Chicken skin isn’t quite as tough as duck skin, so I had to be very careful not to rip the skin as I pulled the stitches tight. Making stitches about an inch away from the edge of the skin was the best solution. About 20 minutes later, she was all stitched up!

One last addition – streaky bacon weaving to top off the bird, and add a little more flavour to the gravy 🙂 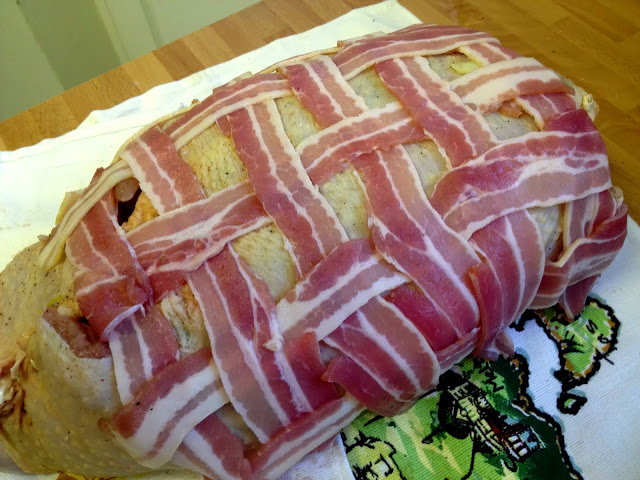 Into the oven she went. We had an hour to kill before I had to come back, baste and turn the temperature down, so we donned our Christmas jumpers and headed to the pub. I went for a roll neck jumper this year, and was a little excited about it. 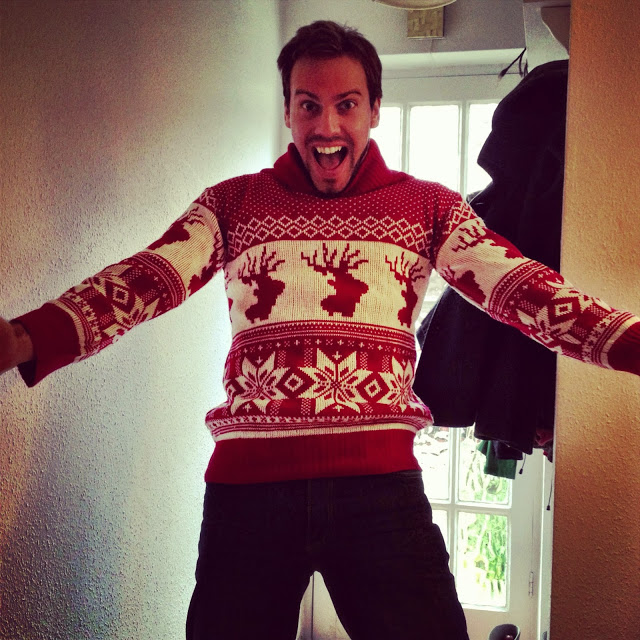 The fat, plump, heavy bird takes many hours to cook. That meant plenty of pre-roast drinks. With a couple of hours to go, I decided to make the starter to keep the lads hunger at bay.

I went for a bacon and sweet potato rosti recipe, and they were delicious. 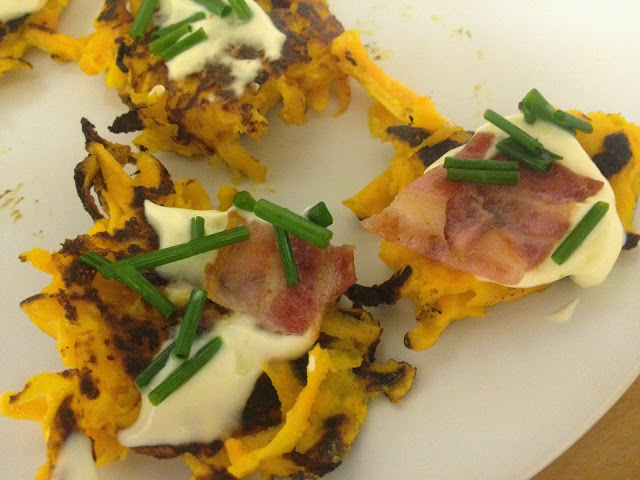 Time for the multi-bird roast. When I got her out of the oven, the smell was incredible. Hearty, Christmas, roast meat and cooked bacon smells.

The three bird roast was a success. Then came the most satisfying part of the whole experience: the carving. 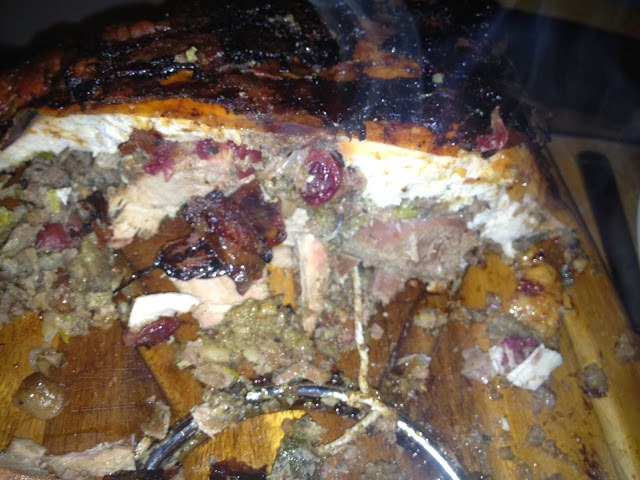 It was incredibly tasty. There was also A LOT of meat and stuffing to eat. Most of the evenings following the roast, both me and my friends (and my neighbours) were eating the leftovers.

So there you have it. A multi-bird roast that will impress even the best chef. If you fancy having a go, I’ll give you one piece of advice – have patience. It takes a lot of time and effort, but the result is very satisfying :).

Let me know how you get on!