Picture the scene. I’ve been delayed by 4 hours at Shanghai airport. This means I land into Hong Kong at 3am. I’m tired after my 21 hour journey….from Auckland. I pass through immigration, and head to the trains. The trains don’t run until 5:30am. Fine, taxi it is. I manage to ramble off my best Cantonese and explain to the driver where my hotel is. Off we go. Within 5 minutes he’s hit a red bollard in the middle of the road as he almost falls asleep at the wheel. Then his right leg starts jerking. This is the same leg that hits the accelerator, which means I get shunted – for the next 5 miles – Mr Bean style, all the way to my hotel.

With my GAdventures tour starting in two days, it gave me a chance to explore Hong Kong by myself. I grabbed a map, and headed out around lunchtime. When I stepped out of the hotel, it surprised me that one or two tiny restaurants had queues out of the door. Not just one or two people out of the door – I’m talking around the corner…30 people, maybe more. I’d heard a few other people talking about how amazing the food in Hong Kong is, so when I got back to the hotel, I decided to look for a some sort of foodie tour.

It was a pretty easy decision. Much like Bolivia, Tripadvisor came up trumps.

I booked a spot for the next day.

I joined a group of 7 other people, on a walking tour run by HongKongFoodieTours.com. We said our hello’s, made our introductions, tucked our new foodie tour map under our arms, and headed out into Hong Kong Island to explore some local foodie delights.

We crossed the road, and headed into the back streets of Hong Kong central. Our guide, Silvana, stopped us close to Stanley Street and showed us one of the last remaining streets for outdoor street stall food. 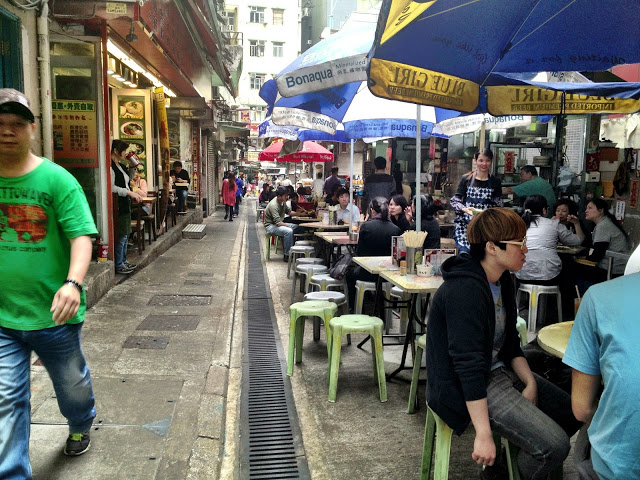 The local government stopped issuing street stall licences a few years ago, so it’s expected most of the remaining street stalls in Hong Kong will eventually die out. I was getting hungry, but glad I had the opportunity to see the stalls in an open street.

We walked uphill for another 5 minutes and then stopped outside another restaurant. “Snake soup is very popular in winter…many restaurants like this one have cages of live snakes next to your table…you pick the snake, and some minutes later, you get the soup“. We weren’t stopping to try the snake soup, but I could feel my stomach give me a look that said ‘don’t even think about it’.

We turned the corner, and headed downstairs into a restaurant I would have normally given a wide berth. We sat down at two tables, and were told that this was the best place in Hong Kong for wanton soup. True enough, there were only locals in this restaurant, and it seemed nobody spoke English, so I couldn’t argue. 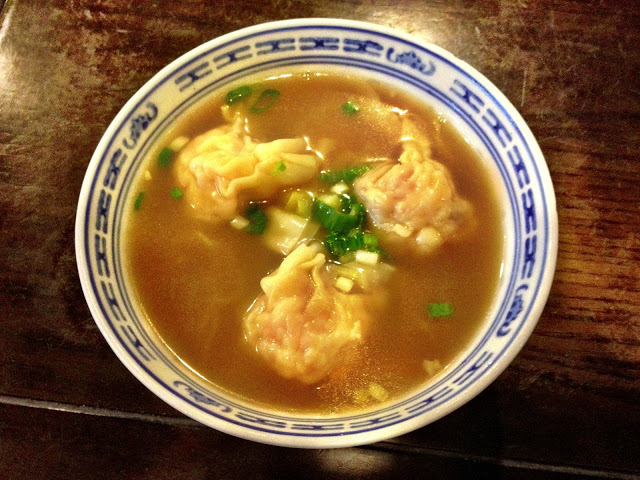 The wanton soup was delicious. Each wanton was hand made by their chefs, and each wanton contained three large shrimp…no mean feat apparently.

I was just about finishing nibbling on my last shrimp when it was time to move on. Next up, BBQ pork.

Once again we strolled into a restaurant that I wouldn’t usually have given the time of day. There were four old Chinese men playing a card game in the entrance, then the eight person foodie group walked in and the place was full. I got the feeling that we were really off the beaten path.

That didn’t matter. The BBQ pork was incredibly tasty, and possibly my favourite meal of the tour. It was nothing glamorous, far from it…in fact it was just pork and boiled rice…but the pork was moist, incredibly tasty, with a deep smokey BBQ flavour. 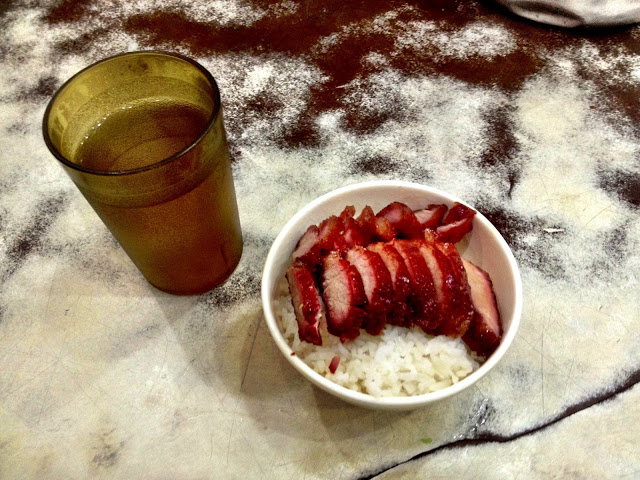 This BBQ pork restaurant was chosen because they roast their own meats. Given the size of the place, I thought that was a joke, but when we’d finished the BBQ pork, we went next door….

There was a man slicing barbeque pork on a counter next to the window. It smelt amazing. 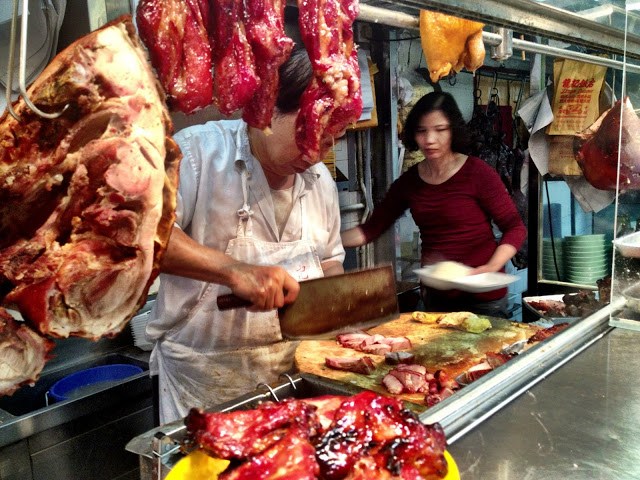 We ventured towards the back. There were pigs, cooked and non-cooked, all of sizes hanging everywhere. This restaurant use a giant, vertical steel oven, so the whole pig can hang inside and cook, instead of being chopped up and cooked. During a peak day, they can cook up to 60 pigs. Impressive. 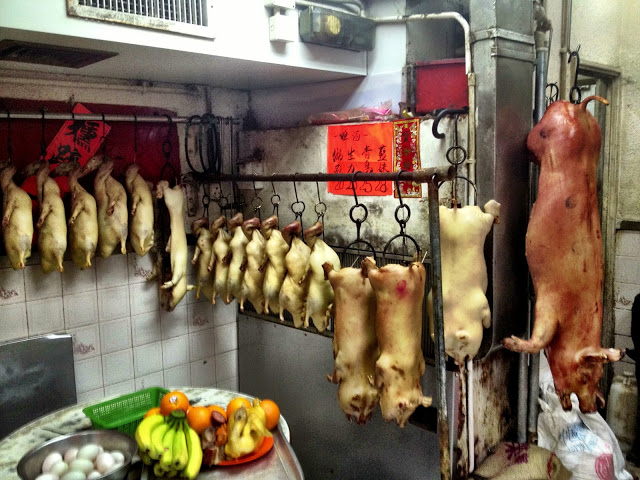 To walk off the BBQ pork and the wanton soup, we took a stroll through Gage Street market. The colours and smells were something else.

There was a fish stall with an amazing array of small shellfish, regular fish, eels, crab, lobster…you name it, they had it. There was a veg stall, a fruit stall…in fact every food stall you can think of. 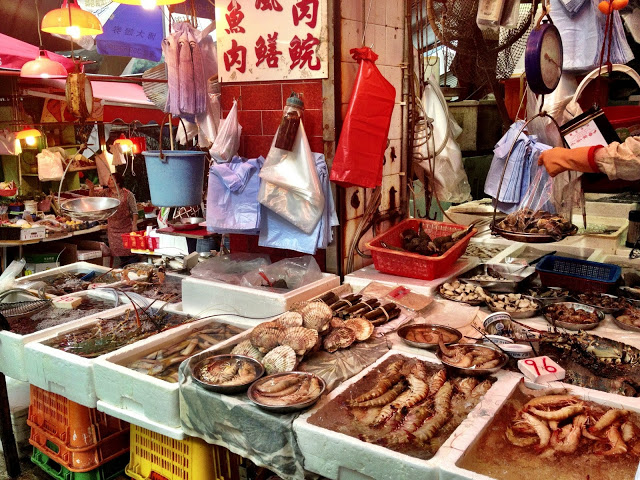 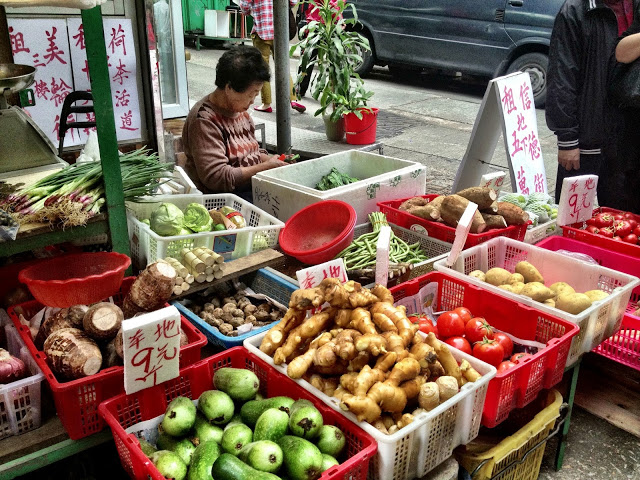 We continued to the upper part of Peel Street, past a new Peruvian restaurant called Chicha. “The people who live around this area now, both locals and expats – are foodies at heart. They take their food seriously, so new restaurants like this one keep popping up“. Having tasted some of the cuisine Peru had to offer earlier in my trip, it didn’t surprise me that this restaurant was doing well in a foodie area.

No sooner had I turned away from the Peruvian restaurant we stopped again, outside a dried food shop. 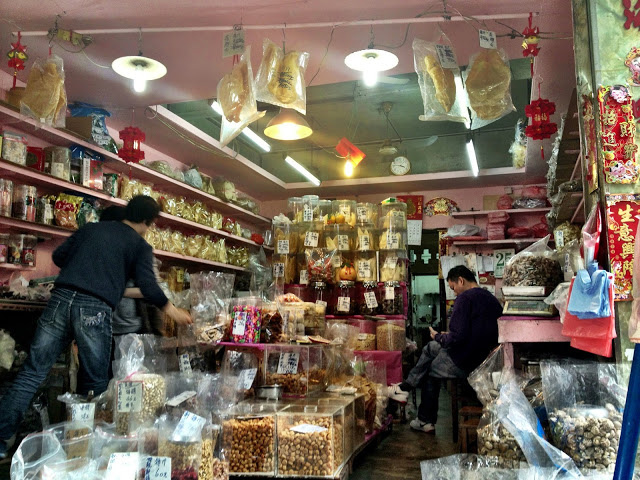 Something immediately caught my attention. I looked closer at the bags hanging over the entrance and asked what they were. 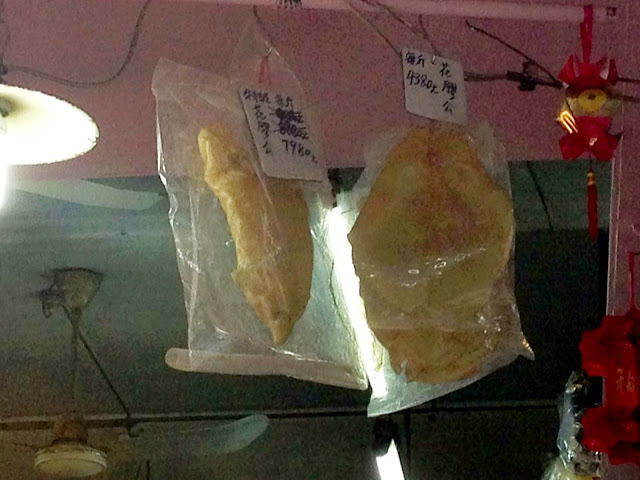 “Ah, those are dried fish belly…cod“, said Silvana. Dried fish belly. That’s not what was bothering me. What made my jaw fall to the floor was the price. Initially selling at over 9000, it was now 7980 HKD – approximately £630. “Dried fish belly is a popular delicacy in Hong Kong“. Delicacy or not, I would need to cancel the rest of my trip to afford one.

With the BBQ pork and wanton soup still digesting, our next stop was for liquid refreshment – sugar cane juice to be precise. 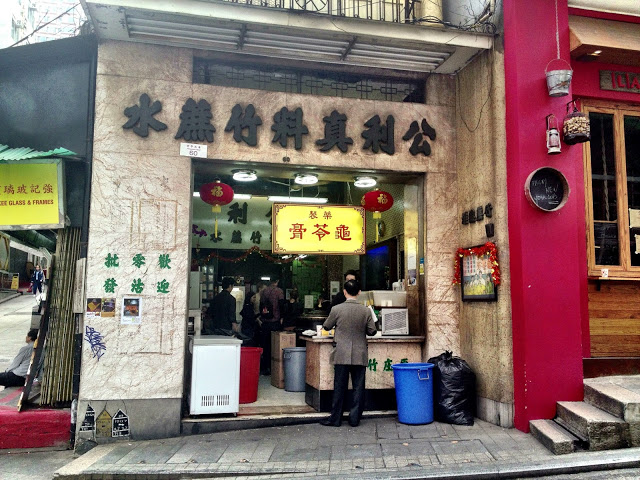 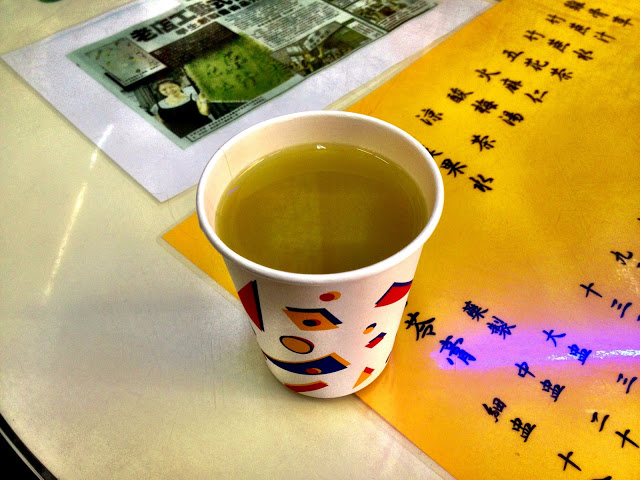 It was another little shop with no English menus or writing. The sugar cane juice was sweet…syrupey…but had a slightly grassy, slightly earthy taste. Nice enough, but you couldn’t have more than one cup full.

A fellow foodie on the tour then noticed a dark, thick liquid in the fridge. He asked the obvious question. “That is turtle jelly. Made from turtle shell and Chinese herbs, it’s very good for you. It helps for detox, and helps the skin. At Chinese New Year everyone eats a lot of deep fried food. You see in their faces red blotches and spots breaking out, which we believe is a form of ‘fire’. Drinking turtle jelly cools the body down and helps get rid the toxins. They have a big vat over there to make them“. Fascinating. And so they did. I wanted to try some, but my face wasn’t on ‘fire’, and the smell was off putting enough. 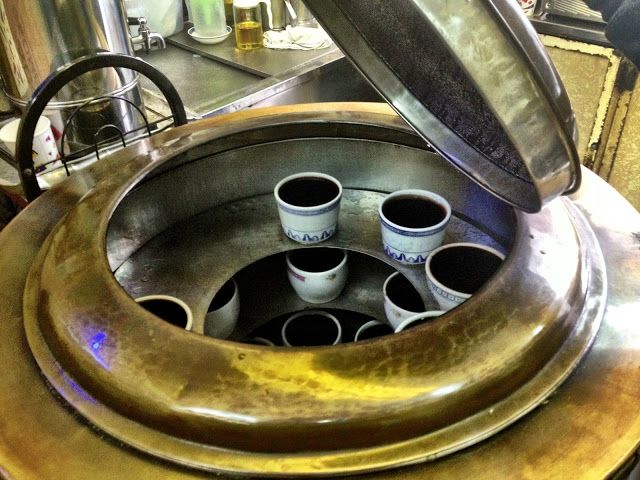 After taking a right hand turn, we headed to an area which had become populated and bought up by wealthy Westerners. They had developed old buildings into new style ones for expats to live, pushing prices in the area through the roof. Once bustling shops were now closed down, as increasing rents had forced locals to move on. The government are now issuing higher stamp duties for foreigners buying property in this area, as locals also find it difficult to buy. It’s a battle that will continue for many years.

Next up, learning all about the six different types of Chinese tea…which I enjoyed so much it got it’s own blog post.

Second to last, a restaurant that provided a lovely helping of local spring rolls, beef filled char sui buns, and a selection of pork, beef, shrimp and bamboo shoot dumplings.

Now I really was full. But we Brits always leave room for dessert. Good job, as the last stop was a custard pie and cake shop. 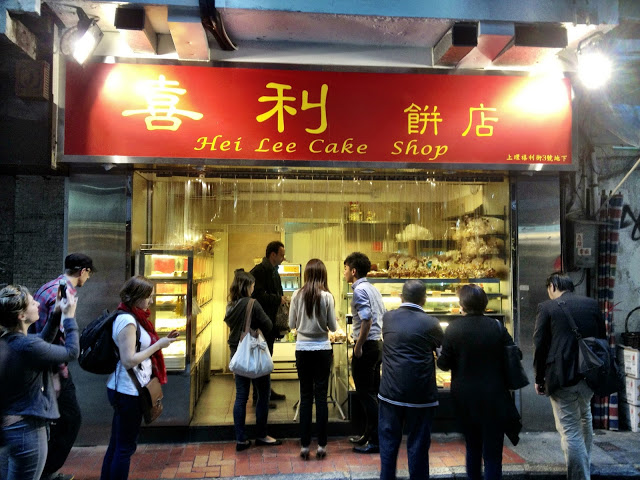 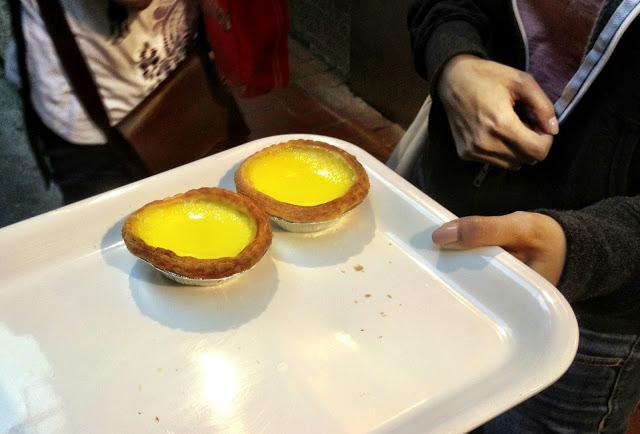 I grabbed the last custard tart, and with that the foodie tour was complete. It was a fantastic afternoon, exploring off the beaten path, trying foods and restaurants I wouldn’t normally have tried. This tour is pitched as unearthing hidden gems, and it lived up to that promise. Silvana was an excellent foodie guide, with great local knowledge, and I’d recommend the tour to anyone visiting Hong Kong.

All that was left was to walk off the dumplings, char sui buns and the custard pie. I took a stroll down to Tsim Sha Tsui, walked along the Avenue of Stars, and took in the skyline.

Not a bad start to my journey around Hong Kong and China trip after all.