There was a QR code on the wall in the karaoke room, which, if scanned, would give you a list of all the artists and songs available. Interestingly, lots of them tried to scan the QR code, but every single one of them assumed the camera on their phone would scan the code.

This is the problem with QR codes going mainstream. As good as they are for combining the offline mobile world with online, there’s still an awareness and learning element missing for the average joe.

So How Do You Scan A QR Code?

Simply enough, you need to download an app on your phone which is capable of scanning QR codes or barcodes.

The best app I’ve come across for the iPhone is Scan, though QR Reader for iPhone, i-nigma QR Code Reader and iScanner will all be able to scan a QR code. 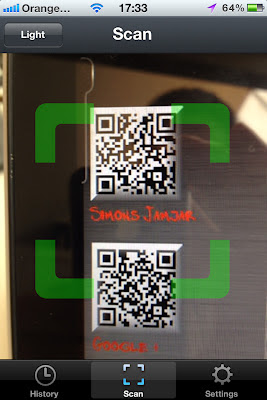 Once you’ve got the app, simply access it on your phone, point the phone at the QR code, and the app will do the rest. If the code is readable, you should be taken to a website URL, image or offer.

Altruism Versus Self-Interest My First Infographic!
Scroll to top