Blog - Latest News
You are here: Home1 / apres ski2 / Ski Lingo – All The Skiing Slang You Need To Know 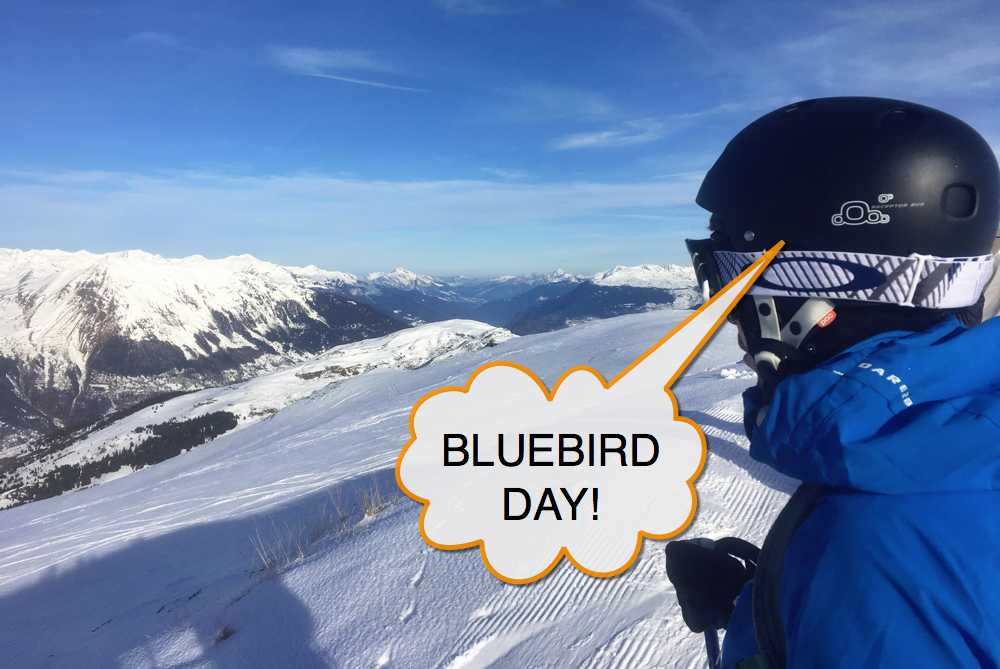 Whenever you learn a new activity or sport, you are classed as a beginner. For any beginner there is a large degree of learning, especially around the nuances of the language used within the activity or sport.

Skiing is no different. If you skied for the first time this season (the lingo begins already), you’ll have come across ski slang and phrases that you would have probably no clue what they meant.

Fear not. Ever new skier has been there. I’ve been there. The ski lingo language evolves too, crafted by skiers and snowboarders who are far younger and cooler than me.

In February I went skiing in Meribel, and during the week we had several days when it was crisp white pistes and clear blue sky. ‘Another bluebird day!’, I posted. One of the responses, from a fellow travel blogger who had never skied, was: ‘what’s a bluebird day?’. It was a fair comment. Sometimes I get so wrapped up in my ski slang bubble I forget that some of the phrases used in ski resorts simply don’t make sense to the outside world.

“You should write a post about ski lingo“, he said.

So here I am, writing a post about the different words and phrases you’ll come across when embarking on a ski holiday. In no particular order, here goes:

Bluebird day – this phrase is typically shouted by excited skiers and snowboarders first thing in the morning when they open the curtains, and typically denotes a cloudless, blue sky day, often after a night of snowfall. 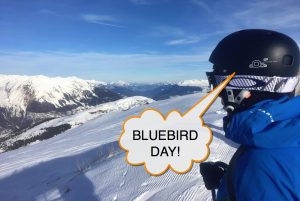 White out – pretty much the opposite of bluebird day. This is the period of time when the snow clouds roll in and you can barely see 10m in front of you. Best to sit this one out in the bar.

Gnarly – I think this is more of a snowboarders term (they have their own lingo), but is a word for something that is pretty dangerous, and/or awesome. For example, that black run was gnarly as f*ck.

Tracked out – when fresh snow has been skied or boarded to death and there are no fresh lines available.

Trek out – when you venture off piste but miscalculate the terrain, slow down, eventually stop, then have to take off your skis and hike out of the predicament you’ve got yourself in. “Yeah we hit some off piste off the back of the red run but it got pretty gnarly so we had to trek out“.

Snow plough – the very first technique you’ll learn on the slopes. This is where you point your toes inwards, which in turn points your skis inwards, making a pizza slice shape, and using your weight to turn left and right.

Magic carpet – often used by those learning to snow plough, a magic carpet is a essentially an uphill conveyor-belt to help beginner skiers up the slope.

Pow Pow – depicts the best conditions for skiing: fresh powder. Often combined with gnarly for use in a positive context. “That was some gnarly pow today!”

Backcountry – This is more of a Canadian / American word, as I heard it a lot in Whistler. It basically means any off-piste area outside of resort boundaries that is not patrolled or cleared of avalanche dangers, usually quite a way from the resort.

Edges – These are the sharpened metal strip on the sides of your skis, used for gaining control on the snow, and enabling a good, solid turn.

Crust / Crusty – this is when a frozen layer on top of, or just under a thin fresh layer of snow, makes the piste a little slippery under skis. They feel like little patches of ice, but use your edges and you’ll breeze over them. Often found on pistes that are busy and where the sun doesn’t hit the snow.

Parallel turn – the technique you learn once you’ve mastered the snow plough. This is where your legs turn in parallel, letting the skis do the work as you turn.

Carving – some might call it the ultimate ski technique. This is where you let your skis do the work, lean right over on your edges and create a series of clean turns, often in giant “S” shaped swoops.

Dump – This means there has been a big snowfall of fresh powder.

Groomer – This is the term for pistes that have been barely skied, and you are one of the first to carve tracks in the snow.

Grooming – At the end of the day, the pistes need to be cut up and maintained for the next ski day. To spread new snow and smooth over bumps and icy patches, tractors known as piste bashers drag giant rakes over the snow.

Fresh Tracks – Skiing on pistes and through fresh snow before anyone else does, leaving behind your trail for all else to see. I did this in Whistler – we got an early lift up at 8am, had breakfast at the top of the mountain, then a siren sounded to indicate the pistes were safe, and we were the first to ride the piste all the way to the bottom. Bliss.

Moguls – Bumps and mounds that form in the snow usually created by the turns of skiers, and often found on black runs and the side of red runs.

Twin Tips – skis that have both the tail and tip turned up at the end, enabling a skier to ski backwards with ease. I once tried this and the brake on my ski broke off.

Binding – this is the part of the ski that connects your ski boots to the actual skis. Ski bindings are designed to release from the ski during a fall, to ensure you don’t injure yourself.

Wipe Out – a very un-poetic fall, either on or off-piste, often resulting in skis coming off. Also known as ‘yard sale‘ in the USA and Canada.

Powder day – this depicts the conditions in resort after an epic snowfall, resulting in lots of fresh snow, both on and off-piste.

Corduroy piste – this was a new term for me this year! It means the same as a groomer – when the piste is freshly groomed, and when close to the ground it looks like a freshly ironed pair of corduroy trousers.

Liftie – these are the guys that operate the ski lifts. They often have a dry wit and dark sense of humour, but are generally friendly.

Apres ski – skiing isn’t just about being on skis and hurtling yourself down a mountain, oh no. It’s also about the time spent in the bar at the end of the day, a.k.a. apres ski. This is about drinking beers and shots, swapping stories about the day and dancing on tables in your ski boots between the hours of 3pm and 10pm.

There you have it! All the ski lingo and slang you need to survive a ski holiday. Have I missed any words or phrases? Let me know in the comments below!

An Update On My Travel Plans For 2017

Introducing Betsy – The First Beer Designed To Be Drunk At 35,000ft
Scroll to top