I was travelling with a Dutch girl across the Peru / Bolivia border when we first started talking about things to do in Bolivia. We opened her travel book and started reading about La Paz.

“Are you going to cycle down the worlds most dangerous road?”, she asked, as I was mid-chew of a Sublime bar. “I’d prefer to live to be honest” came my mangled reply, and we spoke no more of it. 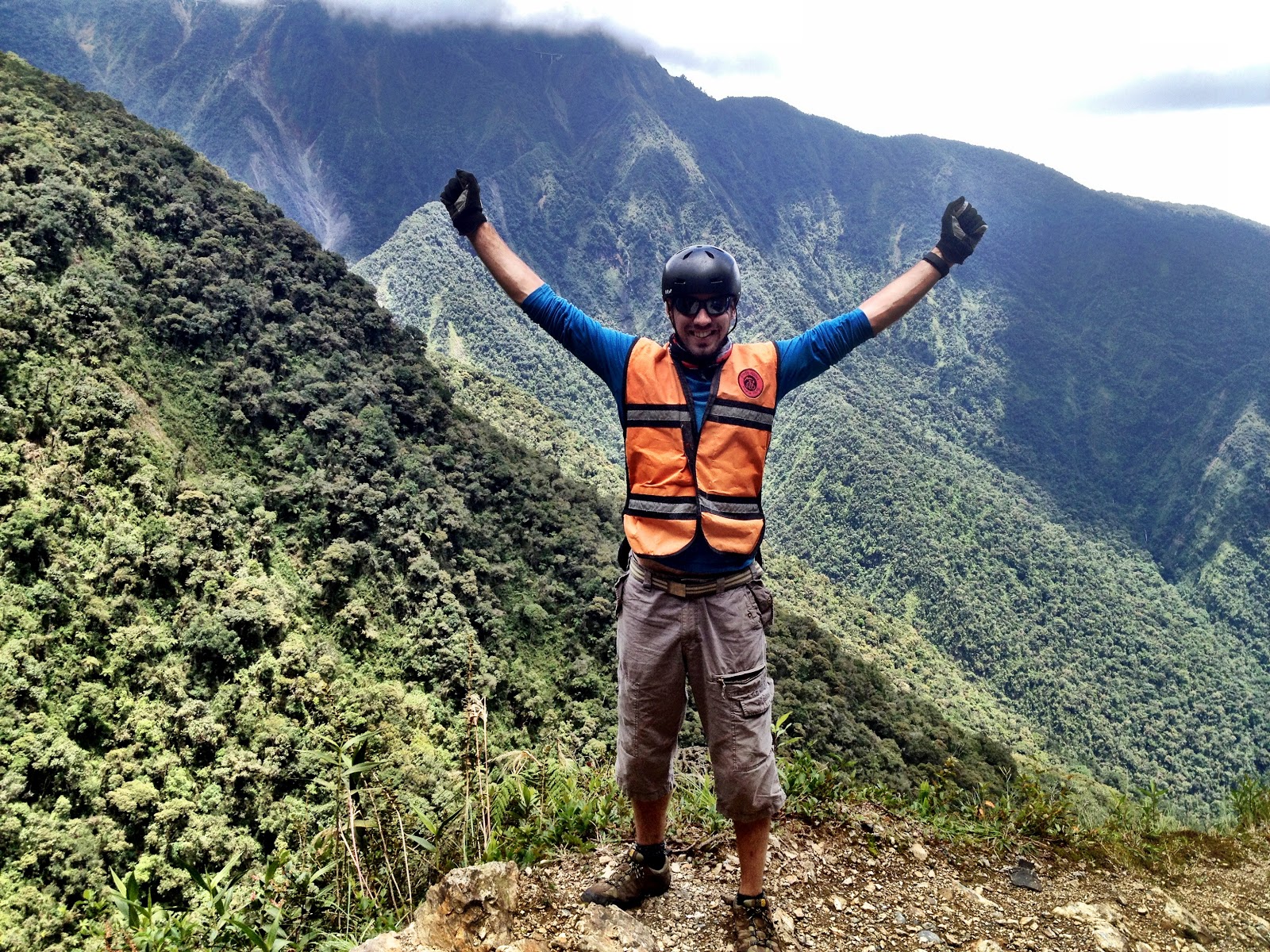 I woke up the next morning in my hostel in La Paz and decided to turn to Tripadvisor for inspiration on what to do. The first suggestion that showed up? Cycling the North Yungas Road – the world’s most dangerous road, also called the Death Road (El Camino de la Muerte).

At that point I decided that you only live once. I’d come all the way to Bolivia, and given this opportunity was now on my doorstep, I thought f*ck it, I’m going to do this. 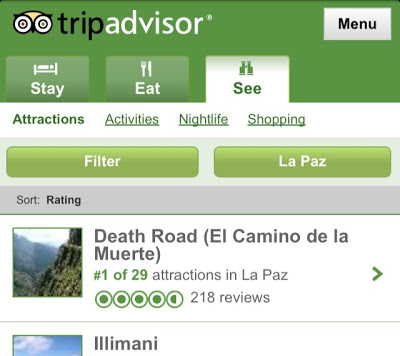 I got in touch with the Dutch girl, told her my plan, and within 3 hours the two of us (plus her two Swiss friends) were booked to ride the Death road the next morning.

We booked the cycle with Gravity, who are one of, if not the safest, most reputable company running the tour. Their bikes are top quality, well maintained, and cost around $3000 per bike, so they take it seriously. All the safety equipment was included, and you get a free CD, a Buff headscarf, and a free t-shirt to show you diced with death. Not bad for 750 Bolivianos (about £75).

I guess you might be wondering what makes this the world’s most dangerous road. I was curious too, so here’s what I found. One estimate states that around 200 people are killed annually on the road. Around 18 cyclists have died on the road since 1998. Even though another (safer) road was built, the road is still used by buses and lorries, and most of the road is single track, making passing particularly bum tensing.

After a hearty breakfast the next morning, we were met by a mini-bus with mountain bikes loaded on the top. Every bike was tailored to each person, as front and rear brake set up varies from country to country.

After a one hour bus ride uphill from La Paz, we parked by the side of the road and the bikes were unloaded. Each bike had a name – my compadre for the day was called Barney. I thought that sounded cute, but aggressive. But maybe that was just my brain blowing a fuse at altitude.

We put on all the safety equipment – helmets, knee pads, high vis jacket and gloves – and then it was time to have a first practice ride around the car park. It felt great to be back on a bike – Barney and me were having fun.

This was all computed into my excited little head.

More importantly we were told that even though safety was of primary importance, there are generally three reasons why fatalities happen when people cycle down the road:

Safe, controllable fun was also computed by my brain.

With the safety briefing complete, it was time to saddle up and hit the road. We started in La Cumbre (4700m), and descended on the first stretch of road, which was all tarmac. This gave everyone chance to get used to their bike, gauge their own speed and get used to riding in single file. It was yet another glorious blue sky day, which meant the road was dry, so I wasted no time in riding at the front behind our guide. Even though it was only the start, this small section felt amazing. 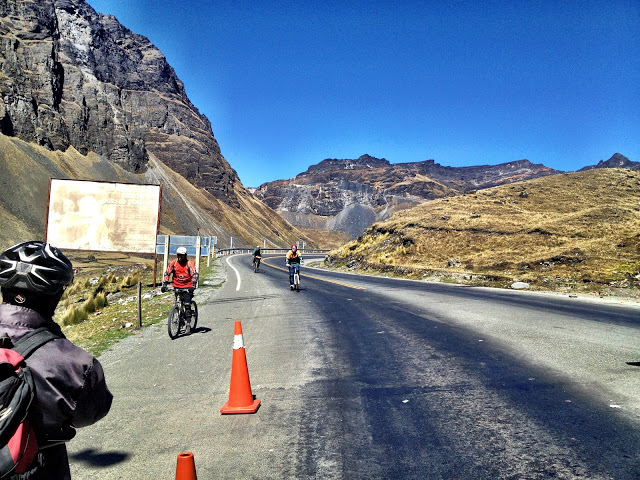 We cycled on the road with amazing scenery (and the odd grazing llama), and made regular stops – one even being a drug check point. After this stop, the bus picked us up, and drove 8km uphill to the official start of the Death Road. From here it was all gravel.

Once the bikes were unloaded, we were given a second safety briefing. This time we were given tips on riding on gravel, over rocks, and what to do if we come across traffic on the road. Uphill traffic is given right of way, followed in rank by vehicles going downhill, and lastly cyclists. Rule 1 – don’t pick a fight with a vehicle. The information was computed once again. Even Barney seemed to register the information, which gave me confidence.

At this point it’s worth mentioning the scenery. We were about 4000m high, looking at snow capped peaks and Altiplano vegetation. The road is 64k long, and finishes at a small town called Yolosa at the bottom of the road that is 1,100m above sea level, with rainforest vegetation in the Amazon basin. That works out as a total descent of around 3600m. Spectacular on every level. 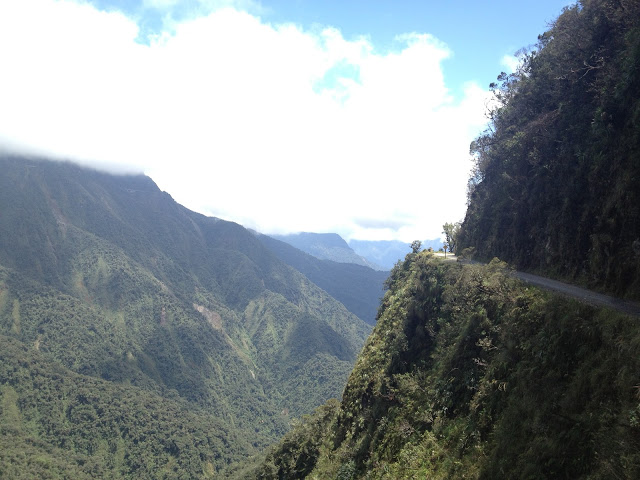 We made our way tentatively down the road, to get used to the gravel. The air was warm and the road was dusty, so it was important not to ride to close to the person in front, or else you got a mouth full of dirt. We were told to ride on the left side of the road (next to the sheer cliff edge) as it made it easier to spot any oncoming vehicles. Anyone who wasn’t particularly comfortable lost their confidence over the edge of the road at that point.

Even though we were 100% focused on the road, the peripheral vision told us that the views were spectacular, which made the ride even more enjoyable. Throw in a few waterfalls and a couple of rivers running across the road, and it made a very fun ride indeed. 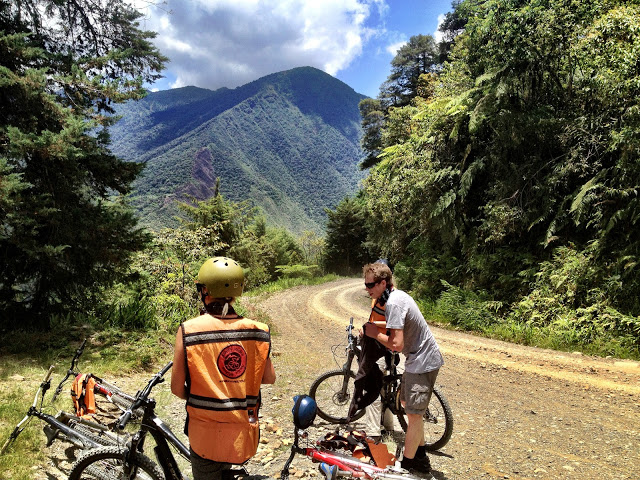 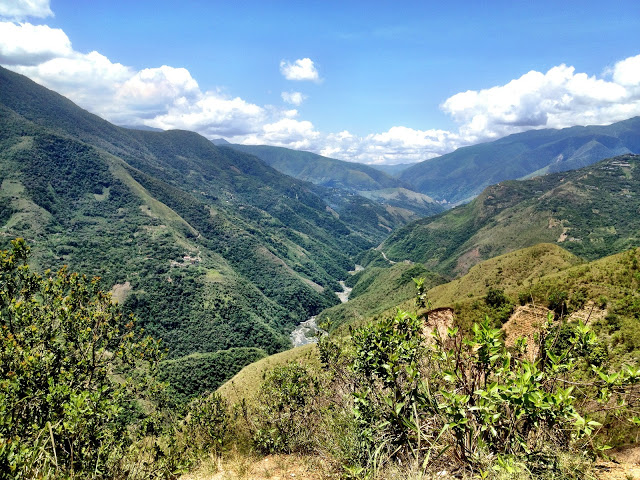 We stopped for another break lower down, and were told that the stretches of road would become longer between each stop, giving us chance to speed up or take in the scenery as we felt necessary. We were also told that we would pass a couple of small villages, and to watch out for chickens on the road. This was so common that there is an unwritten rule that if you hit a chicken, you can pay 15 Bolivianos and take it home for dinner. I’m still not sure if that’s classed as roadkill.

I confess that for the last few sections of gravel, I was hurtling myself down the road. Barney and I knew each other so well we were practically married, and he was reacting well to all the bumps and turns. I was second in line behind the guide, and we flew down the road and eventually ended up in Yolosa. It felt like the ride went so quickly that I wanted to ride more. But it had been 5 hours since we set off from La Cumbra pass. I was hot, dusty and exhilarated. A celebratory beer was calling, so I hopped off the bike, took a quick photo, packed up all the equipment, and waited for the others to finish. 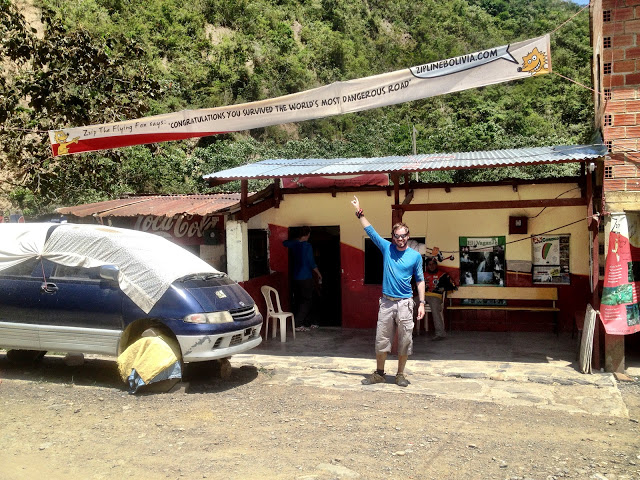 30 minutes later, we were at La Senda Verde, and animal refuge close to Yolosa. With monkeys, caymans and parrots roaming freely, we sat and enjoyed a cold, celebratory beer.

But sitting in the shade didn’t seem like much of a celebration, given that we had just cycled 64km down the worlds most dangerous road, and survived. Once we found out we could take the beers and sit in the river in Amazon basin and soak up the sun, we snapped up the opportunity.

With the bike ride complete, food in the belly, and all of us smelling fresh after a shower, we were all set to head back. With Gravity, the way back is in the bus….all the way back up the road. Arguably, this was more dangerous than cycling down the road, but it gave us chance to take a few photos which we missed on the ride down. 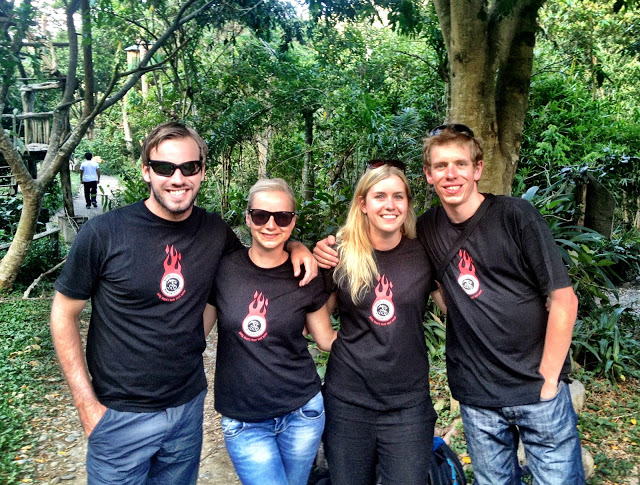 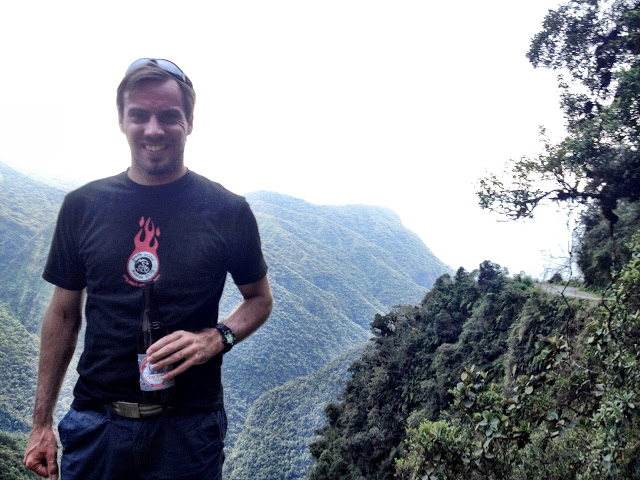 After a couple of beers were suck on the road back, the driver kindly stopped and opened the door at one of the narrowest points on the road so we could take a photo. Even with beer numbing the nerves, I cannot tell you how scary this view actually was. 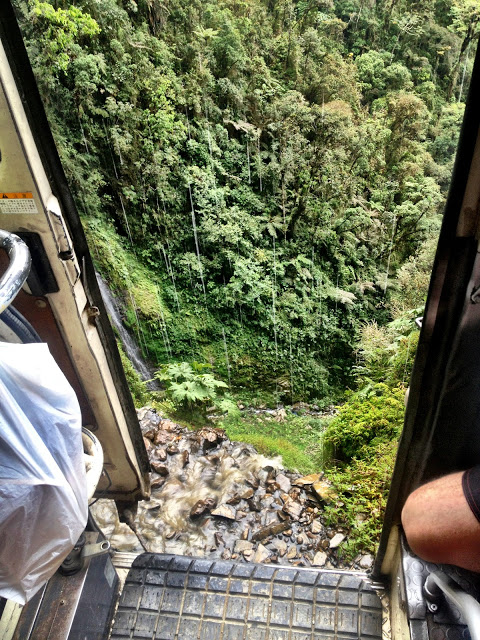 As the bus turned back onto the asphalt, there was a huge sigh of relief, and a new beer was opened. Not only did we survive the cycle down, we also survived the bus journey back up.

With our t-shirts proudly on show (and the beer bellies protruding through), we arrived back in Laz Paz, full of a sense of fulfilment. Only now was it time to let the family know I’d cycled the road :).

There’s no doubt that the worlds most dangerous road is very dangerous, but I felt safe all the way down. As well as the salt flats at Salar de Uyuni, this was definitely one of the highlights of Bolivia for me, and I’d recommend it to anyone who is coming to La Paz and is comfortable on a mountain bike. Just make sure you give Barney the love and attention that I gave him.