Blog - Latest News
You are here: Home / Beckham is Back

After a short absence, David Beckham has finally returned to the England squad to face Brazil and Estonia. Following my last post about bringing Beckham back, Steve McClaren has finally had to give in to Beckham’s superb form of late. 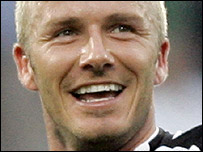 Many congratulations to my former colleage who set up the site Bringbackbeckham.com – he (and thousands others) finally got their wish.

I am one of the lucky ones who will be at the England v Brazil game and am looking forward to what should be a great game. Beckham starts of the right with the skilled trio of of Gerrard, Lampard and Cole next to him. Not forgetting of course that Owen makes his long awaited retrun to the England fold also.

There are still question marks over Beckham’s England future after his move to LA, but let’s just savour the next two games and take it one step at a time.

The Power of Google Images Check out the new Ask!
Scroll to top