Blog - Latest News
You are here: Home / Metatarsals and Penalties

The latest victim of the broken metatarsal disease is Wayne Rooney, on whom much of England’s World Cup hopes are pinned. Rooney has broken a metatarsal in his right foot, and will be out for at least six weeks meaning he will miss all England’s group matches. Rooney also suffered a broken metatarsal against Portugal in the Quarter Finals of Euro 2004.

Ledley King is also said to be suffering from a metatarsal injury, but again hopes to be fit for the finals.

Fractures of the metatarsal bone may look minimal, but the pain and discomfort that come with a small fracture is incomparable. 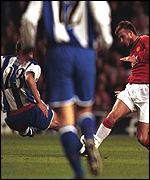 Back in 2002 (again just before a World Cup) David Beckham broke his second metatarsal in a Champions League quarter final. This was 2 months before the start of the World Cup, and we all now know that he was nowhere near fit enough to undergo 90 minutes.

England are good enough to go a considerable way without Rooney, but lets still hope his metatarsal recovers in time for the latter stages of the World Cup in Germany.

And then there’s penalties. Not meaning to sound like a Carlsberg advert but England’s penalty dramas have probably caused more heart attacks than scary ghost tours.

Waddle and Pearce in 1990, Gareth Southgate in 1996, David Batty in 1998, and David Beckham and Darius Vassell in 2004. So lets hope with or without metatarsal injuries England have been practicing their spot kicks.

A Short And Sweet Trip To Lyon
Scroll to top