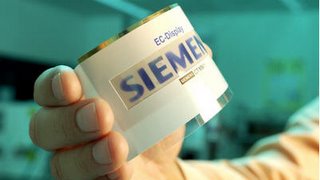 With soooooo many innovations being produced in the technology world, its difficult sometimes to imagine how we can go one better. But never underestimate to power of the human brain.

It generally takes a lot for me to say;”Woah – now that’s cool” – especially when it comes to technological innovations.

For those who weren’t at the 2005 Plastics Electronics trade fair in Frankfurt (don’t blame you) you would have missed that Siemens are currently in the process of developing paper-thin TV screens that will be pretty cheap to produce.

These paper thin TV’s could revolutionize the way we read newspapers and magazines. Imagine reading FHM where the women move before your very eyes…..but don’t stop on
that thought too long.

It’s almost like we’d be living a real life Harry Potter movie, where the newspapers come alive. So forget big LCD screens or typical Flash on a web site – Siemens have apparently reinvented the word ‘innovation’.

These new paper thin TV screens will no doubt revolutionise advertising and will be on our shelves in early 2007.

My first blog post about paper thin TV screens was back in 2006, and they still haven’t hit the mainstream market as yet. A few of you have asked when the flat panel technology will reach our shelves, and it seems companies like Siemens and Sony have yet to decide on commercial products using the technology.

In Japan on May 25th Sony entered the race for paper thin TV displays. Sony’s offering – first shown in Japan – is a razor-thin display that bends like paper whist showing a colour video.

So what would be some good ideas for products that could use the technology? Here’s a few of my ideas;

Other companies including LG, Philips and Seiko Epson are also believed to working on a different kind of ‘electronic paper’ technology. So when will it hits the shops? I’d give it at least another 12 months.