Before I left the UK, I was always managing expectations. In work, in relationships, in most things I did. But when it came to travelling, I tried to erase any expectations about countries, people, culture, scenery and everything else my mind would devour.

I’d been in Australia for 2 weeks when I hopped off the Greyhound bus and stepped into the little coastal town of Airlie Beach. Up to this point I loved everything about Australia (apart from how damn expensive it was), so I was hoping a 2 day trip around the Whitsunday Islands would keep my flame burning for Australia.

I’d seen other friends pictures of the Whitsundays, but wanted to experience it for myself. I walked from my hostel down to the harbour area early in the morning, and waited to meet other travellers who were booked on the boat. I sat and read my leaflet again. ‘2 days, 1 night sailing adventure on board the comfortable, adventurous Waltzing Matilda’. Sounded great. I just hoped ‘comfortable’ included air conditioning – it was only 8am and the temperature was already 24°c.

With a 6 pack of beer carefully nestled in my lovely blue Whitsundays Sailing Adventures bag, I introduced myself to the fellow sailors. Two brothers from Italy, two friends from Switzerland, a young couple from Switzerland and two older German couples. It was going to be a European Whitsunday sailing adventure.

“Ah, you’re a pommy!!” was my greeting on board, from Neil, the skipper. “Meet Sam, your other crew member on board. He’s a pommy as well“. And with that, I’d met both the skipper and ship mate.

Matilda was a lovely boat. All shoes and flip flops (thongs for my Aussie audience) were thrown into a bag, and after a welcome cup of tea, we were free to roam the boat. Matilda sleeps 14, so there was plenty of room both up on deck, and down below. It had a BBQ at the back, speakers on deck and plenty of snorkelling equipment.

By the time we’d left the marina, it was closing in on 30°c, so it was nice to feel a cool(er) breeze from the Coral Sea. We sailed (I say sailed….there was no wind, it was all motor) for around 3 hours, exploring the scenery of the nearby islands, and listening to Neil reel off stories about past trips and his sailing experiences. We eventually stopped for lunch – hand made by Sam – and then it was time to snorkel.

Snorkel indeed. The problem with Australia is that there are too many things that can kill you. On that long list of weird and wonderful creatures are sharks and jellyfish.

You may be waiting for me to tell you about the wonderful swimming we did in the coral sea. That didn’t happen…not as you’d picture it anyhow. It was prime irukandji jellyfish time, coupled with the highest tide of the last five years. Those tiny little buggers have a venomous sting which can be lethal. So to prevent their tentacles from binding with the protein in human skin, we all wore stinger suits.

Stinger suits are essentially thin, lycra type material, and we were covered from head to toe. Quite a sight.

The heat was a problem, not only on board, but throughout my time in Australia. By the time I reached Airlie Beach I was well conditioned to the heat, but the Catch 22 situations started to niggle me by the end. Example: The weather is too hot. Solution? Go for a swim in the sea. Nope, you can’t do that because of sharks and irukandji jellyfish. Alternative solution? Go for a swim in a creek. Nope, you can’t do that because you might get eaten by a crocodile. Then add deadly snakes. And spiders. You cope, but you’re on your guard all the time.

Snorkelling in a silly suit done, we were back on board, soaking up the sun and headed for Whitehaven Beach. 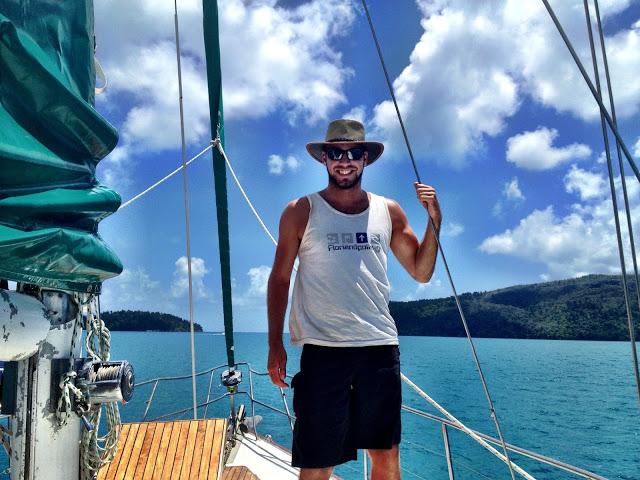 It was a picturesque day. Dotted clouds surrounded by blue sky, turquoise waters, cold beer, free tea and a chilled, fun group of people. We moored the boat, then took the tender across the coral filled waters to the shore of Whitsunday Island. 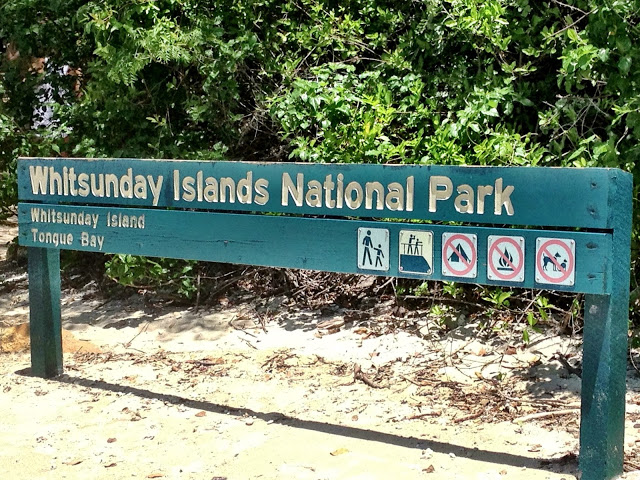 With the flip flops back on, we took a short hike up the hill, thankful for the shade the trees provided. We came out through a clearing, and for one of the few times in my life, the view took my breath way.

‘Wow’ was the only word I could muster. You often see pictures on postcards and think ‘it’s not really like that’. Well the view over Whitehaven Beach was. The colour of the beach, of the sky, of the trees – everything was incredibly bright, and simply stunning. 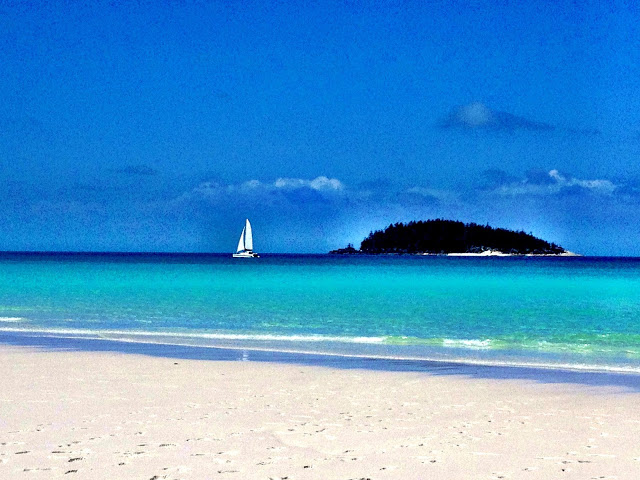 We hiked down the Whitehaven Beach, walked around, took pictures, swam in our sexy black stinger suits, and eventually I just sat. 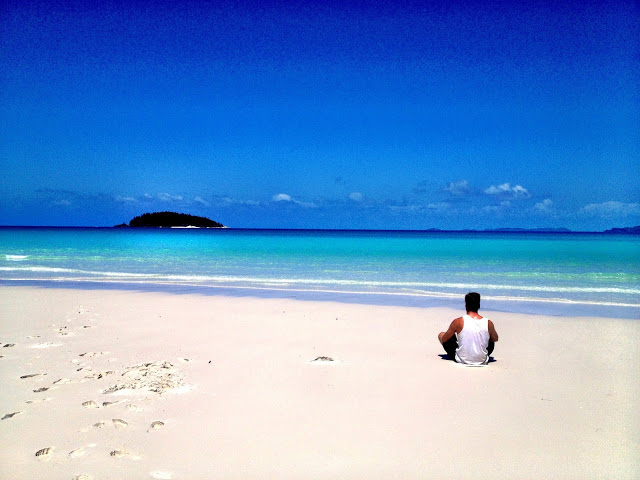 I couldn’t sit for too long sadly. With the sun turned up full blast on my back, it was time to find shade. We all eventually regrouped, and after winning a minor war with marsh flies, we headed back to Matilda for another well earned cup of tea.

There was a renewed calmness on board. I think we all knew it was because we wouldn’t see many places like Whitehaven Beach in our lifetime….but a sense of fulfilment that we had seen it.

I celebrated with a cold beer. Then another. And gradually the sun began to set. No-one warned me how incredible that would be. 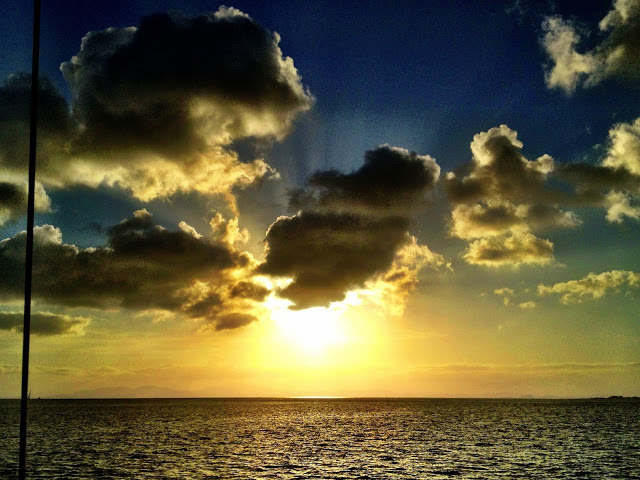 The barbeque was fired up, and we ate dinner on deck, again cooked by budding masterchef Sam. We chatted, swapped travel stories and before we knew it, the sun was down, the clouds had cleared and the stars were out. I’d seen some clear night skies before, but I’d never seen that many stars. I made a note to learn more constellations than just ‘the plough’ and ‘orion’s belt’. Those impress no-one.

“It’s pretty hot and sticky downstairs, so you can all sleep on the deck if you want“. This was getting better and better. We pulled out some mattresses and blankets, and – blocking out Neil’s snoring – we slept under the stars.

I woke the next morning with the sun about to rise over the hill on a nearby island. Looking around, the other members of the group were just sat, in silence, watching the sunrise, camera at the ready.

First order of the day – a cup of tea. Neil told us about the second days activities as we munched on cake and toast for breakfast. It was going to be a lazy day – simply more snorkelling and ‘sailing’.

With time ticking on, we started heading back to Airlie Beach. Neil was still full of facts and stories. Probably the one that sticks in my head was about a cyclone that hit Airlie Beach a few years ago. “I used to be a builder. Out of all the houses you see in Airlie Beach, I built 4 of them. Funny thing is Airlie Beach had a cyclone with 80km winds HIGHER than Hurricane Katrina a few years ago…and we didn’t lose one roof.” Wow.

With the main sail hoisted for shade, there was just time to sit at the back of the boat one final time, and soak up the relaxation.

We eventually reached the marina, said our goodbyes to Neil and Sam, and headed up for a celebratory beer. I knew the beer wouldn’t be as nice as sitting on top of the deck, soaking up the rays, but by this point I’d got pretty good at managing expectations. We raised our glasses and made a toast to the Whitsunday Islands.

A Big Thank You Fellow Travellers

A 15,000ft Skydive In Queenstown
Scroll to top